Tasmania’s Black Swan event – the coincidence of record low dam storage levels and a fault on the Basslink interconnector to the mainland – has put the State’s energy supply under pressure. The Tasmanian Government, Hydro Tasmania and TasNetworks have been implementing an energy plan to ensure the State's energy security.

One result is that by mid-May Hydro Tasmania will have around 220MW of registered, installed diesel capacity in place, around six months since the Basslink outage.

Basslink is expected to come back to service by mid-June, (assuming there are no delays due to bad weather, sea conditions or other unexpected factors) and the Commonwealth and Tasmanian governments have now announced a feasibility study into a second interconnector. At the last state election the now Liberal Government committed to studying the case for a second interconnector. In 2002, one of the sources of revenue for the Basslink interconnector as part of its business case included an increase in revenue associated with the arbitrage opportunities made possible by Basslink, the revenue from the creation and sale of additional renewable energy certificates and the import/export of electricity. It also included contracts with major industrial customers, something that obviously may not be able to be guaranteed into the future.

A coincidence of events in Tasmania, with the lowest ever spring rainfall putting pressure on hydro storages, compounded by the extended Basslink outage have resulted in the current energy security challenge in Tasmania. Despite this, Hydro Tasmania and the Tasmania Government have implemented an energy supply plan, which was formulated earlier this year[i].

As part of the plan, Hydro Tasmania has completed the roll out of the first group of temporary diesel generators to increase generation capacity. Installation of the full complement of temporary diesel generation increases generating capacity by approximately 220MW. The costs include procurement of a third dual fuel unit (see below) and extended hire periods for some equipment.

Hydro Tasmania have connected the diesel generators in conjunction with TasNetworks and registered them to AEMO in a far shorter time than usually required for new generation plant. Figure 1 below shows diesel generation since it started generating in March. The chart also demonstrates that a large portion of supporting power has come from reinstating-gas-fired generation. 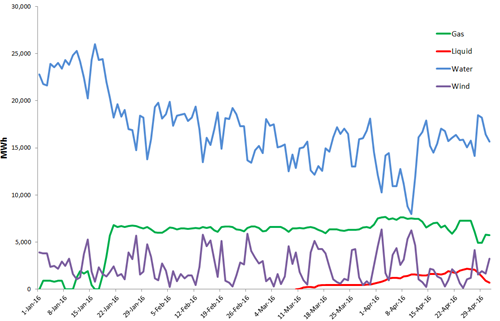 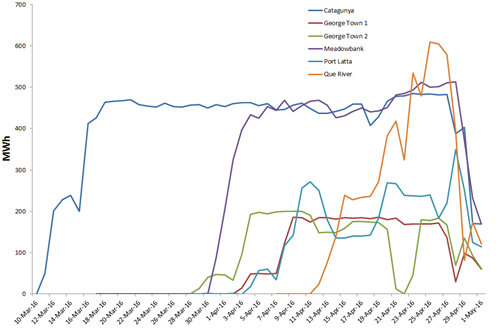 Over the past week, Tasmania has benefitted from welcome rains and for the first time in seven months, water storages have increased.  Water storages are now at 13 per cent, an increase of 0.2 per cent since last week. This is the first time storages have increased since 14 September last year. Storages are likely to remain above the projected low of approximately 12 per cent[iv].

The Basslink cable repair is currently underway but the interconnector is not expected to come back to service until mid-June taking into account likely contingencies such as poor weather and sea conditions[v]. Despite the current repairs of Basslink, the Commonwealth and Tasmanian governments will conduct a feasibility study of whether building a second interconnector would help address long-term security issues[vi]. The Commonwealth study will build on earlier work by the Tasmanian Government.

The study will analyse the extent to which a second interconnector would address long-term energy security issues, facilitate the development of Tasmania’s prospective large-scale renewable energy resources, allow the development of dispatchable and balanced renewable energy into the National Electricity Market (NEM) and integrate with the Victorian electricity market and the wider NEM. The report will also investigate how best to use and develop Tasmania’s current and prospective large-scale renewable energy resources along with advising on regulatory and financing issues and potential cost impacts on electricity customers. The preliminary report is expected to be delivered in June 2016, with the final report expected to be completed by year end in alignment with the work of the Tasmanian Energy Security Taskforce[vii].

The obvious problem with the current terms of reference for the feasibility study is that it doesn’t start from the proposition that the goal is long term energy security and then consider alternatives, including a second interconnector to meet the goal.

In May 2002, the business case for the Basslink interconnector sources of revenue included the sale of insurance products (cap contracts) in the Victorian market and increases in revenue associated with the renewal of major industrial customers, which is obviously not something that may be able to be guaranteed into the future.

It is important the feasibility study doesn’t forget that transmission is both a substitute and a complement for generation in providing energy security. Although renewables in Tasmania may benefit from a second Basslink, a second Basslink would potentially also undermine the viability of the non-renewable plant on the mainland that are expected to be there for Tasmania to draw on when there is insufficient water, wind and sun.

Long term energy security could be met by a contingency plan that could bring in emergency generation, particularly if the security issues only occur once every 10-20 years (noting that until the recent major fault, the current Basslink has proven to be reliable since it was introduced in 2006). A second interconnector is likely to prove a more expensive option.