A Battery for SA: Durable or barely energised?

Last week the South Australian Government announced that Tesla Inc. had won the tender to build utility-scale battery storage in time for the coming summer. We take a look at how valuable this will be for South Australia.

South Australia sources around 52 per cent of its local generation from intermittent sources, mainly wind (42.7 per cent) and solar (9 per cent). Given interconnectors supply only around 25 per cent of peak demand, the SA electricity grid is dependent on the highest level of intermittent generation in the world.

South Australia’s peak five-minute demand over the past five years was 3,259MW[i], and its annual consumption is about 12,000GWh[ii]. It has about 4,700MW of generation within the state[iii] (of which 2,900MW is scheduled), and can source 870MW of generation via interconnections with Victoria.

It’s therefore useful to accelerate the deployment of storage technologies, to see how these work in real time at a commercial level, to increase both system security and reliability and to assess their potential impact on wholesale prices.

Tesla’s proposed battery will be paired with Neoen’s Hornsdale Wind Farm, a 315MW project with 99 wind turbines located about 200km north of Adelaide. It will be able to supply 100MW instantaneously (about 3 per cent of SA’s demand) and 129MWh, or about an hour and a quarter at its full discharge rate. There have been reports that the battery will be configured to provide 70MW of Frequency Control Ancillary Services (FCAS) for 10 minutes and 30MW of energy for three hours[iv].

Tesla’s battery may be the largest battery in the world, but it is still relatively small part of a relatively small market like South Australia. 100MW can perform a useful role to manage system security under some specific conditions (should they arise and the battery be charged), but this first foray into large scale storage is particularly valuable for what we learn from it. Specifically, how does the battery operate in real time to maximise its revenues that will come from both providing ancillary services and higher wholesale prices? A successful commercial trial may incentivise other storage technologies to enter the market sooner.

In this regard it may have been preferable for the South Australian Government to spread the trial across three or four different smaller storage projects. This would have allowed the market to compare different technologies and how they operate. If the Tesla battery is located behind the connection point at the wind farm its operation may not be visible to other market participants. There is also a risk its commercial performance will not be visible and most of the important learning will be done by Tesla, not the market.

There are also potentially valuable lessons about how different applications of energy storage work. Would the battery be more useful if it were located closer to the regional reference node? How does a storage device attached to a wind farm operate differently to a solar linked battery, or a stand-alone battery? How do longer discharge technologies like pumped storage compare to chemical batteries? What is the optimal capacity and discharge duration? Is an hour enough? These are valuable comparative questions that we will not find many answers to with a single 100MW Tesla battery located at the Hornsdale wind farm. We assume this location was chosen primarily to expedite grid connection than for any other strategic reason.

So how would the Tesla battery operate under the most extreme conditions experienced in South Australia? How much could it help manage the severe demand peaks of an extended heatwave?

It is assumed that the wind farm will keep the Tesla battery “topped up” when pool prices are low, and it will discharge when power prices are sufficiently high, but such operational decisions will need to be made by considering expected market prices.

For each five minute dispatch interval, the available generation and demand can be determined from AEMO’s data. While supply in SA comes from both local generation and the interconnectors, a simple means of assessing the proposed battery is to consider the battery’s output when available generation falls below zero, i.e. the state is dependent upon imports to maintain security.

Ostensibly the 70MW FCAS support component is sized to allow fast-start generation to synchronise to the network, and this assumes that plant (and its requisite fuel) is available when required.

If the remaining component of the battery (30MW and 90MWh) is modelled using market data at five minute resolution from the past five financial years[v], we can see that there are a number of shortfalls which can’t be addressed by the battery, either because its size is too small, or its capacity is too limited. 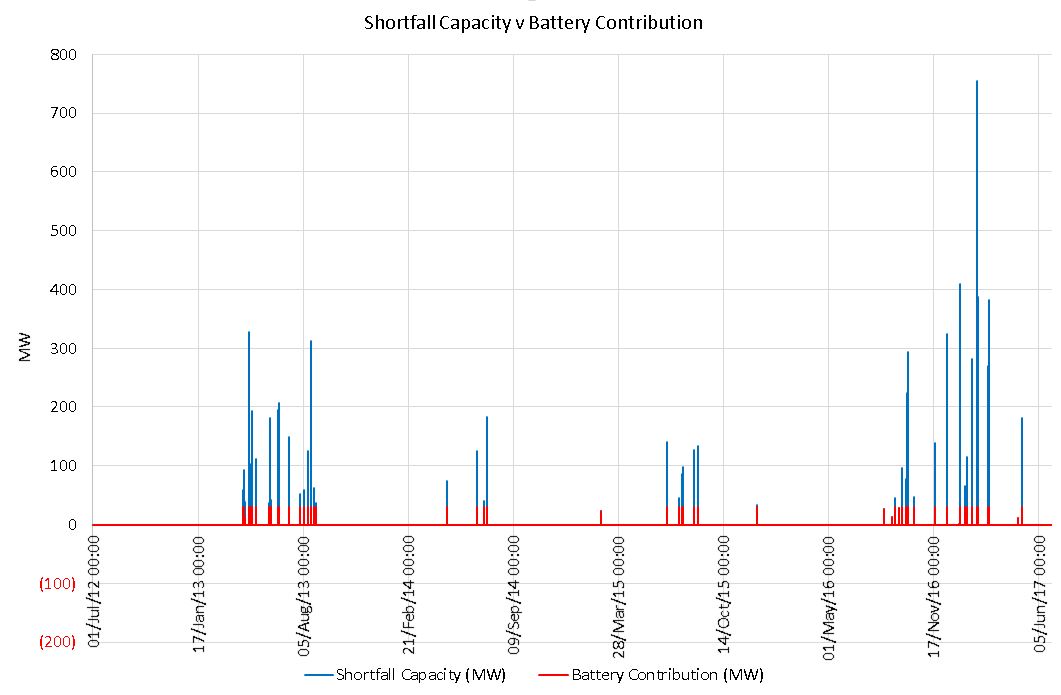 To provide more understanding on how the battery would be working, we can drill down to 8 and 9 February 2017 when there was high demand in South Australia due to extreme heat. This caused AEMO to shed load (on the 8th) and direct plant to run (on the 9th) due to concern that local generation capacity and interconnector capacity was insufficient.

In this case, the battery might have run as follows: 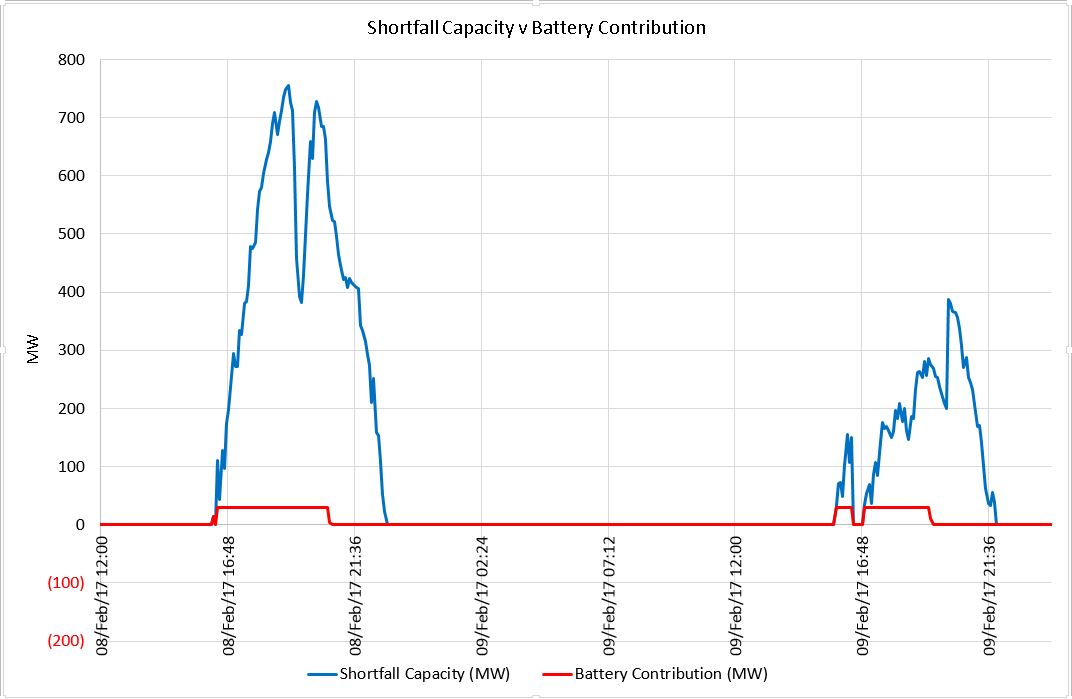 On each of the days, this shows the battery discharging to meet the shortfall in capacity until it is exhausted, in three hours. The AEMO anticipated shortfall is present throughout and continues once the battery is depleted. At that time the battery is no further use until the system has sufficient surplus to recharge the battery.

Of course if batteries such as this were used to cover shortfalls such as the 8-9 February period, many more of them would be needed. The peak shortfall on 8 February was around 750MW, meaning 25 battery installations configured like the Tesla/Neoen project would be required to meet it. Moreover the shortfalls lasted longer than the three hours any one of these would have lasted, although given the peak shortfalls were only for a short period some of the batteries could have been run below maximum in order to last longer. Of course, more batteries would likely mean both lower prices at the point of discharge and higher prices for the interim periods when batteries were recharging, so the financial returns of each project would be affected. Already Zen Energy has indicated they may rethink their own SA battery project[vi].

Although the analysis has been necessarily brief, it indicates that the proposed battery for South Australia has limitations in both its output and its capacity. It will be interesting to see if the installation provides the increased system security needed over the coming summer – and whether lessons learned from the trial will be made publicly available.

[v] Thanks to a beta version of Global-Roam’s NEM-Review v7 data analysis tools.

Disruption is one of the cornerstones of the success of Andrew Forrest’s Fortescue Metals Group. FMG’s ability to get things done in the face of seemingly insurmountable barriers can be illustrated no more vividly than when BHP and Rio Tinto sought to prevent the then start up iron ore miner from accessing its rail lines in the Pilbara. FMG built its own and outdid its rivals by extending those lines to Perth. Now FMG wants to apply the same zeal to energy and green steel.