2018: The summer of demand response

The closure of Hazelwood Power station in March and Northern Power station in May last year has significantly reduced reserve margins for electricity in those two states.  This is most acute during the summer months, when demand in these regions is traditionally at its peak for the year.

The Australian Energy Market Operator (AEMO) has identified low reserve conditions for both South Australia and Victoria this summer, which is a probabilistic assessment that there is the risk of insufficient generation reserve required to comply with the prescribed reliability standards. Or in other words there is an increased risk of supply shortage resulting in blackouts.

Concerns over supply shortages leading to blackouts has triggered a reaction by governments and business.  Even if the commercial conditions were favourable, it is not possible to build new power stations in six months.

In March, Engie contracted gas supply with Origin to bring the second unit at Pelican Point power station in Adelaide back on line, whilst, AEMO has been working with generators and transmission businesses to ensure that all existing generation and transmission capacity is available and ready this summer.

These measures have focused on augmenting supply during times of peak demand.  AEMO is also working on measures to enlist a response by industrial energy consumers.  The Reliability and Emergency Reserve Trader (RERT) is a mechanism under the National Electricity Rules that enables AEMO to contract for additional electricity reserves where it anticipates there will be a shortfall.

The RERT has been called three times in the history of the NEM but never activated.  It has had low engagement over the past decade mainly as a result of a surplus of generation.  Not anymore.  AEMO is currently looking to contract around 600 MW of demand side opportunities in Victoria from early January to the start of March 2018[i] (see figure 1), and up to 80 MW in South Australia over the same period[ii] (see figure 2). 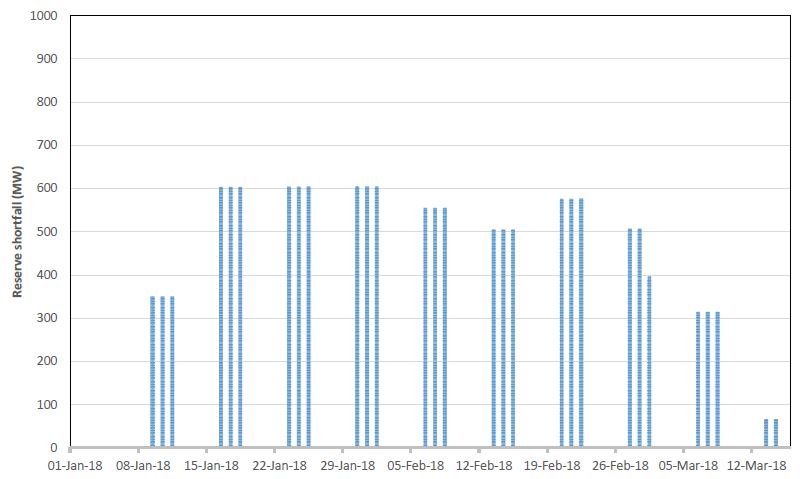 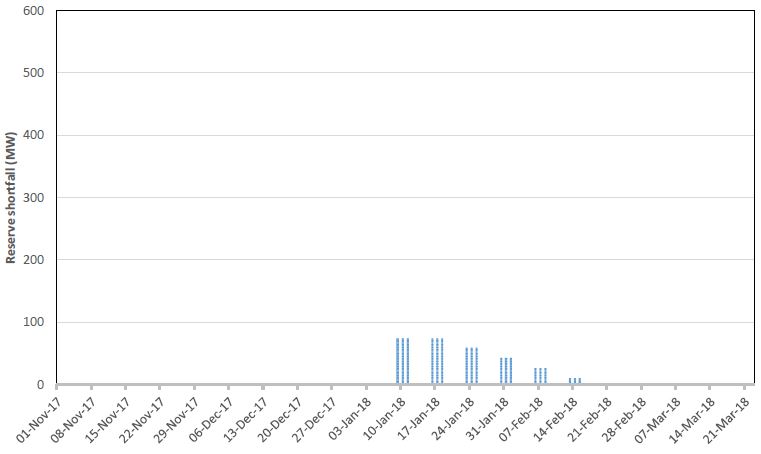 Recent changes to the RERT mechanism will remove long term contracting and enable AEMO to contract more flexibly, to enable a wider group of suppliers of reserve to participate.  AEMO will now be able to pay businesses for contracting RERT capacity as well as payments in the event the contract is invoked.  This will enable businesses which need investment to be able to supply capacity.

Each RERT contract is likely to be bespoke depending on the lead time needed by the facility or aggregator to supply firm reserve in the event it is called on.  Some large energy customers like smelters may be able to reduce demand in a few minutes, while others may need 24 hours or more to cancel shifts and switch off production.

AEMO is calling for expressions of interest until early July, and will then call for tenders to contract reserve after that.  The size of the RERT market will continue to evolve as AEMO updates its medium term forecasts for next summer.  Given the electricity demand-supply balance is now increasingly weather dependent (high temperatures increase demand and wind increases supply), it will only be inside the actual weather forecasting window of a week or so when RERT contracts will be activated.

It may be a steep learning curve for AEMO to find and manage 600 MW of reserve after a decade where the mechanism was largely dormant.  In theory there may be a number of businesses that would be willing to contract off their electricity during extreme heat waves.  But AEMO has to find them and then schedule them over a 48 day window with some sort of efficiency.

It’s also worth noting that the revised RERT opens up the provision of capacity payments for demand response, even though it remains an energy-only market for generation.  It does suggest the value of capacity, particularly under peak demand conditions, is increasing as we evolve to an electricity system with higher intermittent generation. The continuing creep of payments to selected resource types, whatever the rationale, further weakens the ability of the energy-only market to deliver revenue adequacy to market participants.

The program will also provide capacity payments for energy users who make their energy available for periods of extreme demand and will be open to both commercial and residential consumers as well as aggregators.

What is apparent from this escalated activity in demand response is that it is likely to be a significant feature of electricity markets into the future.  Constraints on new generation investment and increased supply from intermittent generation means demand has to become more flexible to match variable supply.

While demand response is basically switching off supply (or its equivalent using storage and other technologies), it can serve multiple purposes.  Targeted local DR can be used to avoid network augmentations.  More broadly DR can be used to avoid investment in peaking generation and reduce the cost impact of demand peaks.  And finally DR can be contracted for “emergency” events as is being targeted by the RERT.

As with other aspects of energy supply, consumers do not know or want to know the complexities of these operational arrangements.  They will sign on to DR deals when they think the deal being offered is worth it.  This in turn will place greater emphasis on their evolving relationship between consumers and their energy retailer or other competitive energy service provider, to guide this evolving relationship between system and customer as the 21st century grid unfolds.