Winter gas prices: Are they cooling down or heating up?

Domestic gas prices continue to be on the political radar with leading analyst EnergyQuest noting that east coast gas producers should prepare for “heavy-handed political intervention”, regardless of who forms the next Federal Government[i].

The Coalition has introduced the Australian Domestic Gas Security Mechanism (ADGSM) and continues to reserve the right to trigger it next year, while the Labor Opposition declared that it would modify the mechanism so it would be triggered whenever prices are above a benchmark. Under the Labor proposal, the target gas price would be set by the consumer watchdog, the Australian Competition and Consumer Commission (ACCC) and gas companies would be forced to drive down domestic prices by increasing local gas supply[ii]. The proposed measures could also prevent the export of cheaper, non-contracted supplies[iii].

So how have wholesale gas prices been trending? We take a look at the gas price trends in Brisbane, Sydney, Adelaide and Victoria over the past winter period.

The east coast gas market connects all of Australia’s eastern and southern states and allows gas producers, retailers and large gas consuming industrial customers to buy and sell gas.  There are three types of wholesale gas market within that region:

Gas use tends to be highest in South Australia (32 per cent of primary energy consumption), followed by Queensland and Victoria (20 per cent), and NSW (10 per cent).  The high penetration in South Australia reflects the state’s reliance on gas-powered generation, which increased following the closure of the state’s coal-fired plants[iv]. Figure 1 shows the break-up of gas consumption. 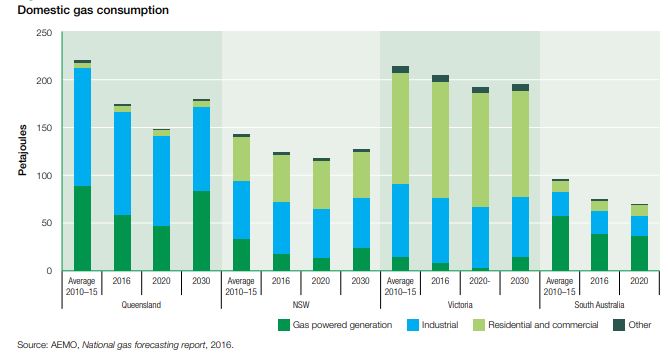 Of domestic gas sales, industry accounts for 46 per cent (manufacture of pulp and paper, metals, chemicals, stone, clay, glass and processed foods). Gas is also a major feedstock in ammonia production for fertilisers and explosives. Gas-fired generation accounted for 21 per cent and a third is used by households and commercial customers, mainly for use in heating and cooking[v].

Gas demand typically rises during the winter period as its use in heating increases. Table 1 below shows the trend of wholesale gas prices in Australia during winter periods since 2014.

The winter wholesale gas prices, on average, appear to have surged sharply on the east coast in 2016 and come back down in 2017. This drop coincided with more gas and offers coming into the market from Queensland[vi].

In 2016 the daily gas prices (as shown in figure 2) were highly volatile due to the continuing expansion of Queensland’s liquefied natural gas (LNG) industry, which drew a greater volume of gas from the market, as well as a rise in gas-powered generation (most evident in South Australia as a result of coal plant closure, lower wind generation and interconnector outages). Reduced availability of low priced coal generation capacity contributed to tighter supply and high electricity prices across the National Electricity Market (NEM) while electricity demand remained similar to the previous year[vii]. 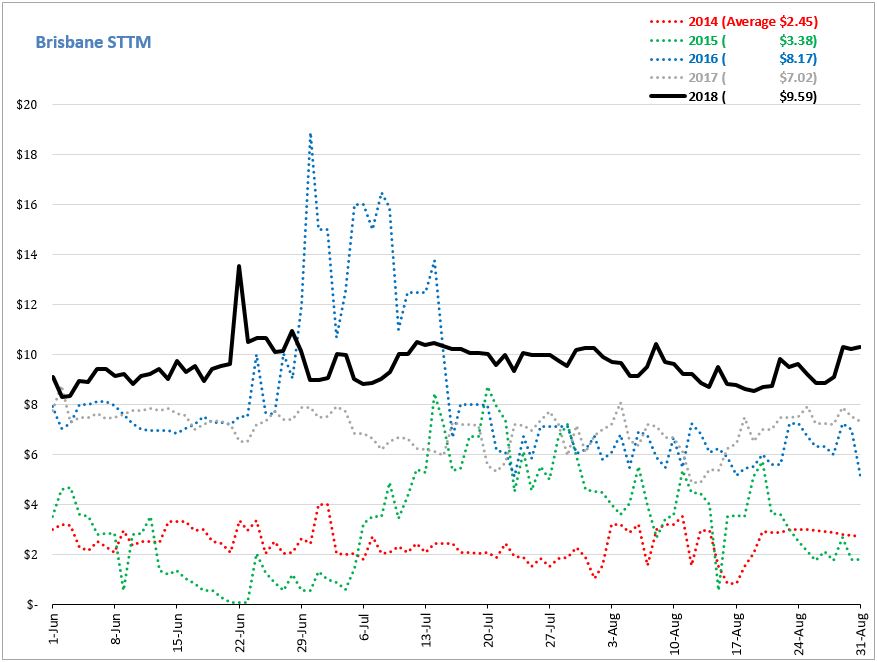 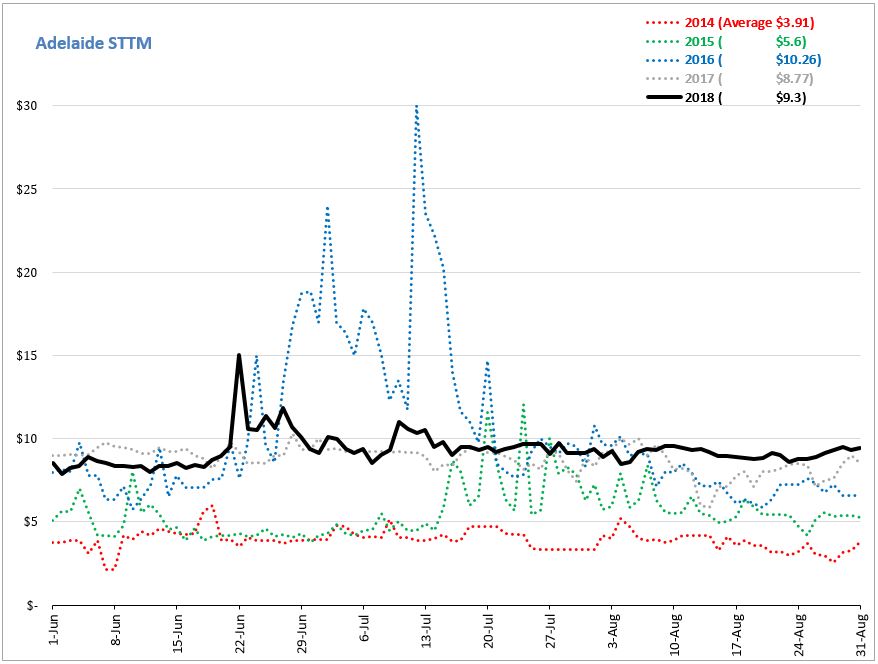 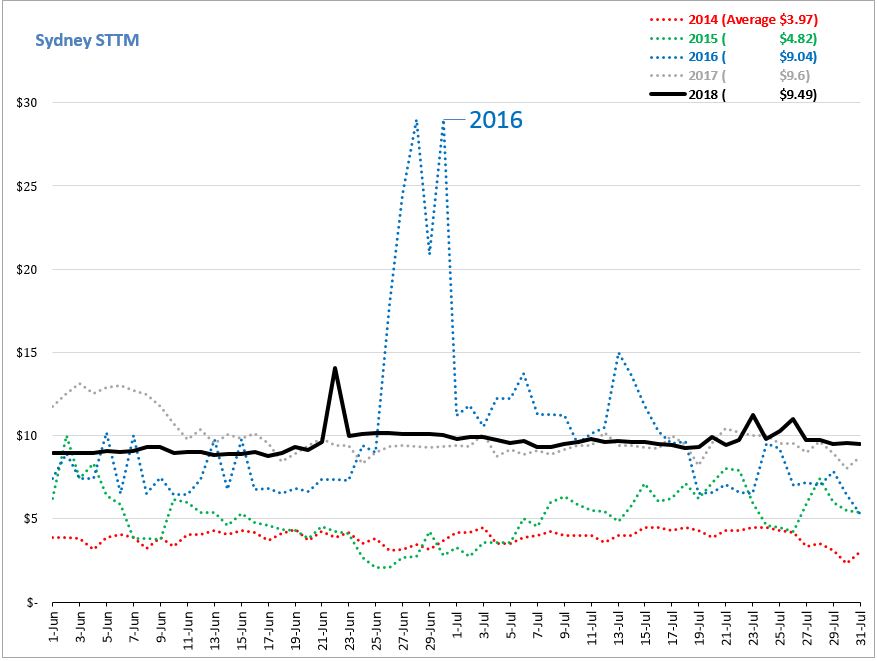 Adelaide’s gas STTM price with an average of $3.91/GJ during 2014 winter period, saw the biggest increase (it had a nearly three-fold rise) and reached an average of $10.26/GJ in winter 2016. Brisbane and Sydney’s STTM experienced a similar fate, with averages increasing from $2.45/GJ to $8.17/GJ and from $3.97/GJ to $9.04/GJ respectively. The GSH and Victoria’s declared wholesale gas market also saw a large jump in prices in 2016.

Across all markets in 2018, the average winter gas price returned to above $9/GJ after the slight decrease in the previous year in the Adelaide STTM, Brisbane STTM, and DWGM in Victoria.

Based on the latest Australian Bureau of Statistics data, figure 3 shows that gas and other household fuel prices paid by consumers have increased substantially. Similar to wholesale gas prices, following the dip in prices in 2017, the overall gas and other household fuel prices in the eastern and southern cities in 2018 returned to a rising trend.

Figure 3: Index of gas and other household fuel prices since 1990 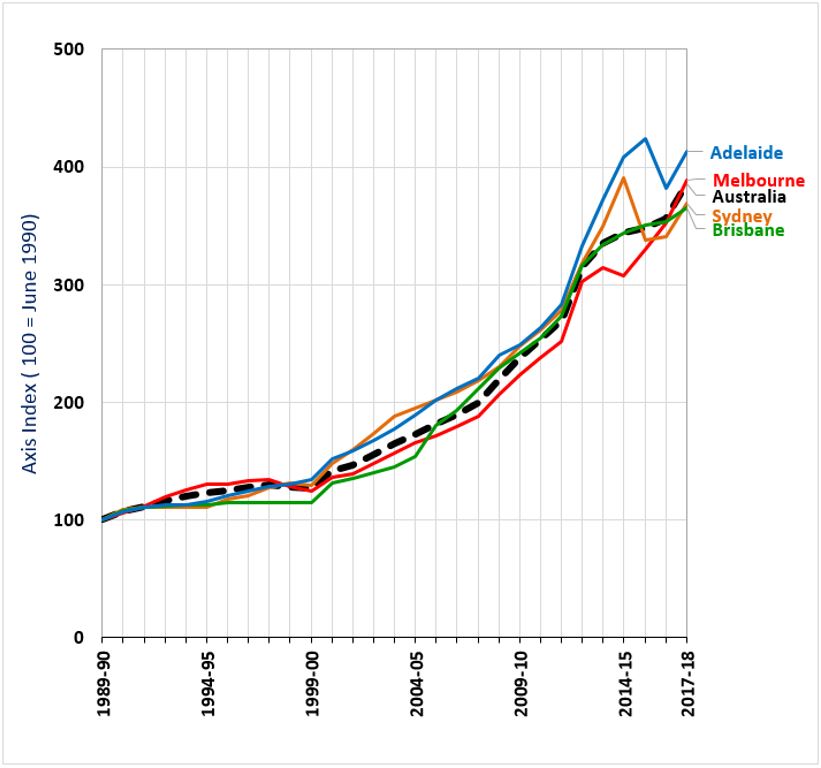 Victoria is the largest residential gas market by volume and has experienced consistently low residential gas prices until 2016, when the state became the second highest after South Australia. The increasing trend in the overall residential price has been mainly influenced by the increase in wholesale gas prices experienced in Victoria (from 27 per cent in 2015, and to 50 per cent and 43 per cent in 2016 and 2017 respectively[viii]) in addition to a moderate increase in distribution charges (per GJ).

In South Australia, the average delivered residential gas price rose in 2016 before dipping in 2017 and then moving back upwards in the following year.

Queensland’s average residential gas price rose in 2016 (4 per cent) and was consistent from 2016 to 2017. The movement from 2015 to 2016 is mainly in the retail component, the other components remained fairly flat with a small decrease in wholesale gas costs and increase in transmission charges.

While market conditions remain challenging, since late 2017 a number of improvements in the operation of the East Coast Gas Market have occurred. According to the ACCC’s report Gas Inquiry 2017-2020, these include: