Will pragmatism induce a change in the (political) climate?

Last week, the Climate Change Authority (CCA) released two reports, representing the culmination of its Special Review, which was a wide-ranging review into Australia’s climate policies. These most recent reports from the CCA reflect a pragmatic approach – the recommendations are predicated on meeting the Australian Government’s Paris commitments rather than the higher emission reduction target recommended by the CCA in its earlier report. They also put heavy weight on policy options that appear more politically palatable on the basis that this would make them more stable and thus more likely to be effective than theoretically superior options that may not last. In response the Federal Environment and Energy Minister, Josh Frydenberg, has said its recommendations will be considered in the context of the government’s 2017 climate policy review. Meanwhile, the CCA’s pragmatism in its report proved to be a step too far for two of the CCA members who released their own dissenting report.

Towards a climate policy toolkit; Special Review on Australia’s climate goals and policies is the third and final report of the CCA’s Special Review. It recommends actions that Australia should take to deliver on commitments flowing from the United Nations Framework Convention on Climate Change’s Paris Agreement, which it collectively refers to as a “toolkit”.

The toolkit builds on existing policies, including the Emissions Reduction Fund and the safeguard mechanism, and incorporates some new policies, which can be scaled up to help achieve the Paris 2030 target and deliver deeper emissions reductions over the longer term. Figure 1 shows the relationship between current policy settings and the Authority’s recommendations for each of the main sectors that produce emissions. 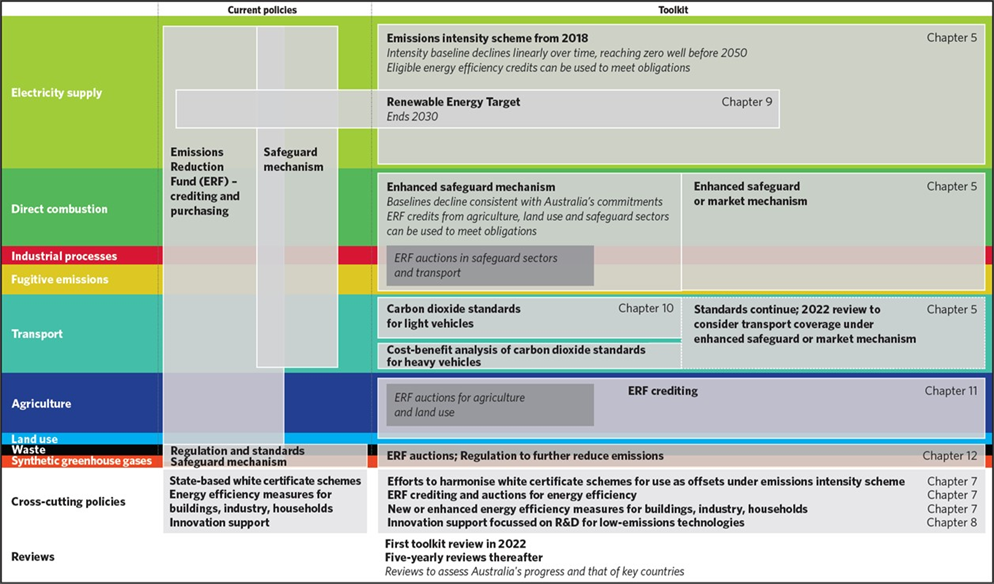 The Authority recommends enhancing the existing safeguard mechanism for three key industrial and resource sectors : ‘direct combustion’ – where facilities burn fuels to produce heat, ‘industrial processes’ – like cement production and ‘fugitives’ (like coal mining and LNG production). In this case, enhancing means declining baselines and extending coverage through a lower threshold (25,000t CO2e pa instead of 100,000t CO2e pa) as well as removing the option to have a baseline re-set at a higher level (due to facility expansion for example).

Existing energy efficiency information and regulation programs such as building codes and appliance standards, in line with the National Energy Productivity Plan, should be continued and strengthened where cost-effective. The possibility of a harmonised white certificate scheme across jurisdictions should be pursued.

Current low emissions innovation programs should continue including through funding to CSIRO, research hubs and universities and other organisations. ARENA funding was not directly referenced, but the CCA recommended grant funding be focussed on early stage research development and demonstration, rather than commercial deployment.

The toolkit should be subject to regular reviews or stocktakes, to precede each five-yearly ‘global stocktake’ under the Paris Agreement These reviews would assess the effectiveness of the policy toolkit in meeting Australia’s Paris commitments, as well as progress by other key countries towards their Paris commitments.

Alongside the Towards a Policy Toolkit, the CCA released Policy options for Australia's electricity supply sector. The core recommendation is that an emissions intensity scheme be introduced in the electricity sector in 2018. The scheme would set an emissions intensity baseline scheme (EI scheme) for the sector, which should reach zero well before 2050. Generators could purchase credits from energy efficiency projects (i.e. white certificate schemes) to help meet their baseline obligations.

The recommendation is supported by analysis drawing from extensive energy market modelling carried out by Jacobs for the CCA that compared seven types of abatement policy for the electricity sector. The relative cost rankings of the policy are shown in figure 2.

As per other modelling exercises, the market mechanisms have the lowest cost of abatement. The report has reconfirmed that national, market-based policy mechanisms remain the most cost effective way to reduce greenhouse gas emissions in the electricity sector. The scale of the transformation of the energy sector and the time needed to achieve it cannot be underestimated, but the report has provided a good starting point for discussion on climate and energy policy.

Technically, cap and trade (or a carbon tax) is lower cost than an EI scheme, because it has a greater effect on the cost of electricity. Accordingly it induces a greater demand side response. But this is in turn what makes it so politically challenging, and the modelling assumes perfect certainty about the enduring nature of the policy instrument. Ultimately, the CCA reasons that an EI scheme is almost as economically effective as cap-and-trade, while being less politically challenging and so more likely to endure.

Other key conclusions of the report are:

Two members of the CCA, climate scientist Professor David Karoly and Professor Clive Hamilton issued their own report, in response to what they say are major flaws within the CCA report. Their principal concern is that the report accepted as the basis for its recommendations Australia’s current 2030 emissions reduction target rather than recommending action consistent with the goal of limiting global warming to well below 2°C. They also offer alternative policy recommendations, including, for the electricity sector, a triple whammy of a carbon price (cap-and-trade), regulated coal closure, and a 65% RET. This triplication of policy levers is puzzling, given that Jacobs’ modelling clearly predicted that a carbon price of the strength required to meet their proposed carbon budget for Australia, would: