Will coal play a role in the NEM?

The Federal Government’s intent to develop a technology-neutral national energy policy has prompted discussions on the potential to develop new clean-coal-fired power stations within the National Electricity Market (NEM).

That debate has focused on the potential for new high efficiency low emissions (HELE) plants, which use ultra-supercritical technology, to be developed.  HELE plants are able to achieve higher steam temperatures and pressures to extract the maximum amount of power from their fuel, which means they have the lowest carbon emission profiles for coal-fired plants [i].  Northern Queensland has been mentioned in dispatches as a possible location for a new baseload power plant.

Despite the Federal Government’s stated intent to encourage all energy investment options, including HELE coal-fired plants, there are no current investment proposals to develop new coal-fired power stations in Australia and those that have previously been proposed are no longer on the table.

Over the past decade major generators have shelved plans to develop new coal fired generation. Given they are 50-year assets, have a relatively high emissions profile and therefore are exposed to carbon risk, these plants have been rendered  uninvestable in Australia.  Even with HELE technology the carbon emissions are relatively high in comparison to gas power plants. The average emissions intensity is estimated to be 0.67-0.74kg/KWh for advanced ultra-supercritical and 0.74kg-0.8 for ultra-supercritical[ii]. For Australia’s black-coal-fired plants the carbon emissions are estimated at around 0.9 kg/KWh, while the best Victorian brown coal plants are estimated to emit around 1.2kg/KWh of CO2. In contrast, the average for gas power plants in Australia is estimated at 0.48kg/KWh[iii].

While it has not been the focus of the debate, coal with carbon capture and storage (CCS) would be more “carbon-proof”, whilst also being more expensive and complex. Hopes for CCS as the major solution to the energy trilemma have faded somewhat in recent years given the lack of carbon pricing schemes around the world (the most obvious policy approach that would incentivize such plant). Those wishing to take a glass-half-full perspective to CCS would highlight the recent completion on time and budget of CCS projects in the US[1] and the Middle East[iv].

Where is power generation investment headed?

Across the NEM the Renewable Energy Target (RET) along with state-based schemes have resulted in an influx of intermittent generation and an exit of thermal power stations. Most recently, the brown-coal fired Northern Power Station in South Australia has been decommissioned while the Hazelwood Power Station in Victoria is due to close in March this year. Together they have taken more than 2,000MW of firm generation out of the market. Currently, there is a lack of cost effective alternatives for baseload electricity in Australia. Hydroelectricity plays a minor role in all jurisdictions, apart from Tasmania, while SA, as a consequence of the growth of wind generation, has become increasingly reliant on gas-fired generation to supplement power from renewables. Gas-fired generators (in comparison to coal-fired plants) are able to respond much more quickly to the changes in output from intermittent generation but while they are cheaper to build than HELE coal-fired plants, they are more expensive to operate.

Figure 1 shows the power projects that have been proposed across the NEM by fuel source in 2004-05 and a decade later. Unsurprisingly, the shift in the number of coal, gas and renewable projects is significant. These are proposals, so there is an element of uncertainty over whether any specific project will ultimately be commissioned, even where they have received planning approval. As such, the status of projects is indicative rather than definitive. Regardless, the chart does give a good sense of where energy sector investment appetite currently sits. 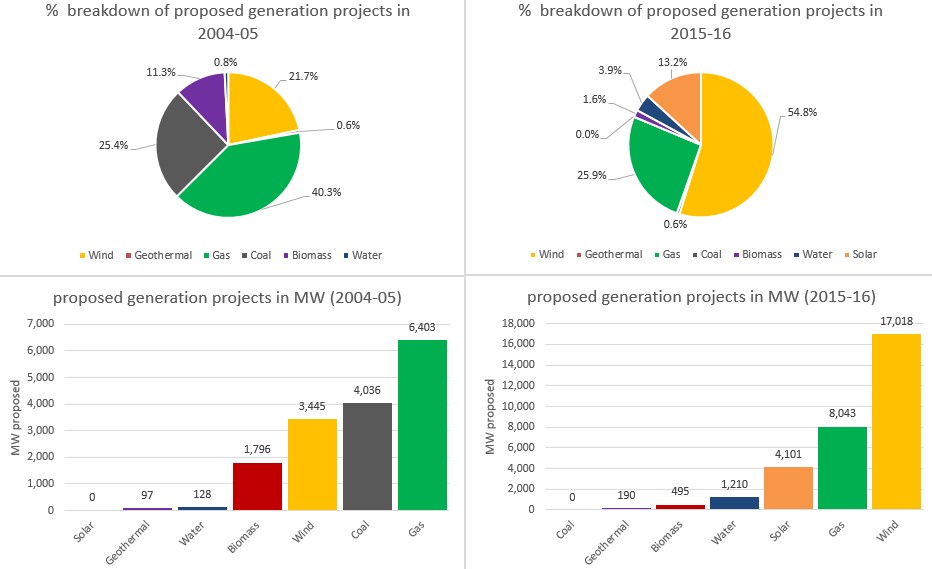 In 2004-05 all the prospective generation developments were coal, gas or wind powered. By 2015-16, the diversity of power plant projects had widened with hydro, geothermal and solar plants also proposed. The investment focus since 2004 has shifted from coal to alternative technologies with a number of government schemes supporting and encouraging technologies with lower emissions. There has been a significant increase in investment for wind since 2004-05, for example, reflecting the enhanced RET.

In the absence of long-term price signals to support new investment, developers are reliant on ambitious policy settings, such as the 100 per cent renewable energy target by 2020 in the ACT[v], to underpin investment in some of the new proposed generation assets[vi]. Clause 12 of the legislation to enact the ACT’s 90 per cent RET states that the large scale renewable energy generator must be connected to the national electricity system[vii]. Therefore, the ACT’s target can encourage the development of wind farms elsewhere in the NEM and as far away as Tasmania.

Changes in climate change policies and government schemes have led to numerous proposed large-scale coal projects being cancelled or put on hold.  And a number of the projects were proposed to meet projections of increased demand, and with the energy market experiencing actual declining demand since 2008-09 a number of those projects were shelved.

There were a number of coal-fired related power projects completed since 2004-05, but these were upgrades and expansions to existing plant rather than greenfield developments.

Last month the Environment Protection Authority Victoria (EPA) granted a works approval for an upgrade to Loy Yang B power station in the Latrobe Valley. This will involve upgrades to turbines, which will improve power generation output by 8.6 per cent, while also decreasing the carbon intensity of emissions by 5 per cent.  The upgrade will make Loy Yang B the least greenhouse intensive brown coal-fired power generator in Victoria[viii].

While coal is expected to continue to feature in Australia's energy mix for decades to come, the likelihood of an energy company investing in a new coal-fired power station remains extremely unlikely despite capacity closures. Below is a list of all the decommissioned coal-fired power stations. In addition to this list Hazelwood has also announced that it will close by the end of March.

At the same time, the current uncertain energy and climate policy environment and the likely long-term carbon risk for what would be a major asset with a multi-billion price tag are all factors that appear to be limiting investor appetite for coal-fired plants here.

While there is unlikely to be any new coal-fired power station commissioned in Australia, advocates point to the fact that the Japanese Government (along with others in Asia and Europe) is moving ahead with its plans to build up to 45 new coal-fired power stations[x]. These plants will utilise HELE technology and use high-quality black coal. The energy imperative in Japan, however, is different to that in the Australian market.  Japan had more than 50 nuclear reactors, which provided around 30 per cent of its electricity supply and, according to the World Nuclear Association, this had been expected to increase to at least 40 per cent by this year. That changed as a result of the Fukushima incident and the prospect now is said to be for two-thirds of this power supply to come from a smaller nuclear fleet. To date, few reactors have restarted since Fukushima[xi].

Given the political uncertainty around its nuclear generation Japan is seeking to diversify its fuel source. It also does not want to be overly reliant on any one fuel source. It is not clear how Japan intends to meet international emissions reduction commitments in the light of this plan.

The RET and jurisdiction-based schemes, such as the ACT’s Renewable Energy Target, have resulted in an influx of intermittent generation and the consequent exit of thermal power stations from the NEM, as can be seen in Figure 2. 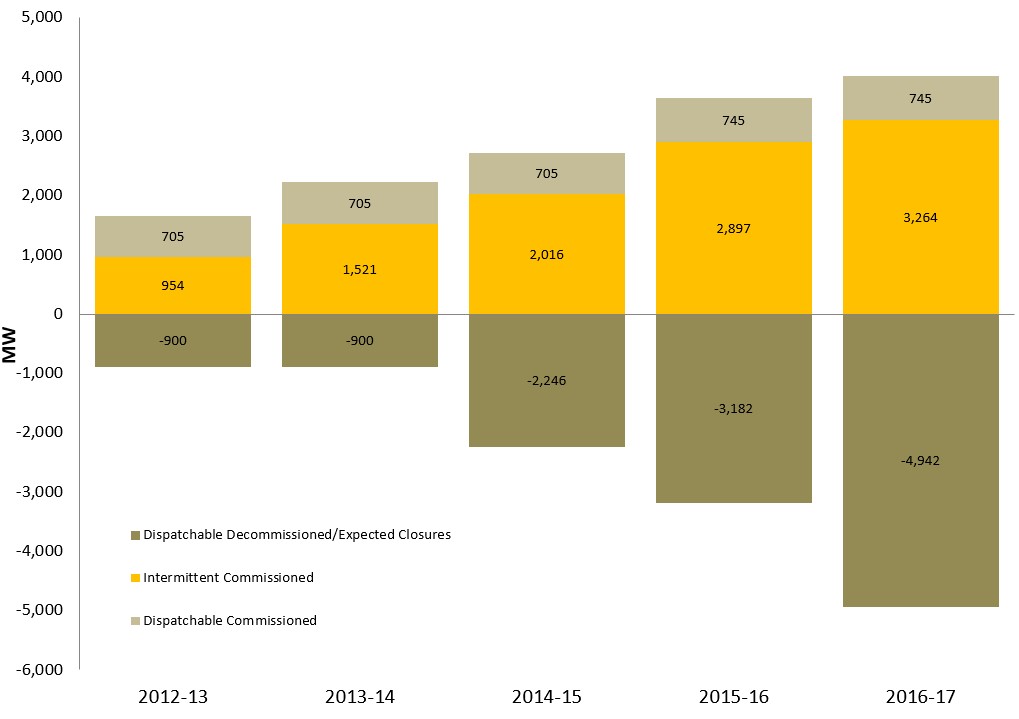 While the increase in renewable generation and events in South Australia have highlighted the need to ensure sufficient synchronous power is available in the NEM, the likelihood of an energy company investing in a new coal-fired power station is low.  Although the efficiency and emissions intensity of a coal-fired plant can be marginally improved by using new ultra-supercritical technologies they remain not only an expensive option, but also carry a real carbon risk. While the carbon emissions can potentially be captured and stored this increases the cost and complexity of the project significantly. This risk is increasingly factored into commercial decision making and that commercial assessment of risk occurs regardless of the current policy settings. It means that it is very difficult to finance coal-fired power stations in Australia.

The AEMC’s residential electricity price trends report shows the ongoing fall in power prices for households. We take a look at the report, what’s behind the price reductions, and break down costs across the states.