What next after Hazelwood closure?

Last week Engie announced it would close the 50 year old Hazelwood Power Station. Engie announced it will close the brown-coal power station and the adjoining mine in five months, at the end of March 2017[1]. The 1,600 MW power station has produced electricity from coal, extracted from the adjoining mine, since the 1960s. It employs 750 people in total, made up of 450 permanent employees and 300 contractors. Post closure, up to 250 people will be required to manage the site for decommissioning and mine rehabilitation. Engie also announced that it is considering the sale of two other power assets: Loy Yang B coal power station in the Latrobe Valley and Kwinana gas power station, south of Perth in Western Australia.

The announced closure of Hazelwood highlights the need for a clear, national energy and climate policy to guide the decarbonisation of Australia’s electricity supply. The closure was long speculated because of subdued growth in electricity demand, Australia’s emissions reductions goals, and the renewable energy target expanding investment in new generation. The Renewable Energy Target, put in place in 2001, is designed to displace fossil fuels with renewable electricity generation to reduce the emissions intensity of the sector. Similarly, a necessary part of Australia’s emissions reduction target of a cut in emissions of 26-28 per cent below 2005 levels by 2030, is to reduce emissions in electricity generation. The retirement of Hazelwood and other relatively high emitting, aging plant are a likely outcome of subdued power demand growth and policy action to increase renewable generation and decrease emissions.

The impact of the various renewable incentives now in place has seen an increase of intermittent generation, which has led to lower utilisation and revenue for coal-fired generators. The consequent effect is the displacement of this dispatchable generation.

After the exit of Hazelwood, Victoria will source more of its electricity needs from its interconnectors, and generation from black coal, gas and hydro sources[2]. It is important to consider the potential impact of this structural adjustment in energy supply on the reliability and security of power in Victoria. The National Electricity Market (NEM) is designed to provide reliable power and the reliability standard sets an expectation that demand will be met 99.998 per cent of the time in a given year[3]. In September 2016, the Australian Energy Market Operator (AEMO) released estimates of power reliability if 800MW of coal fired generation exited the Victorian market (Hazelwood has 1,600 MW of capacity) under a COP21 scenario. The impact did not present a risk to power reliability in the near term, but the estimates show that in the long term to 2024-25, new investment is required to meet the reliability standard[4]. 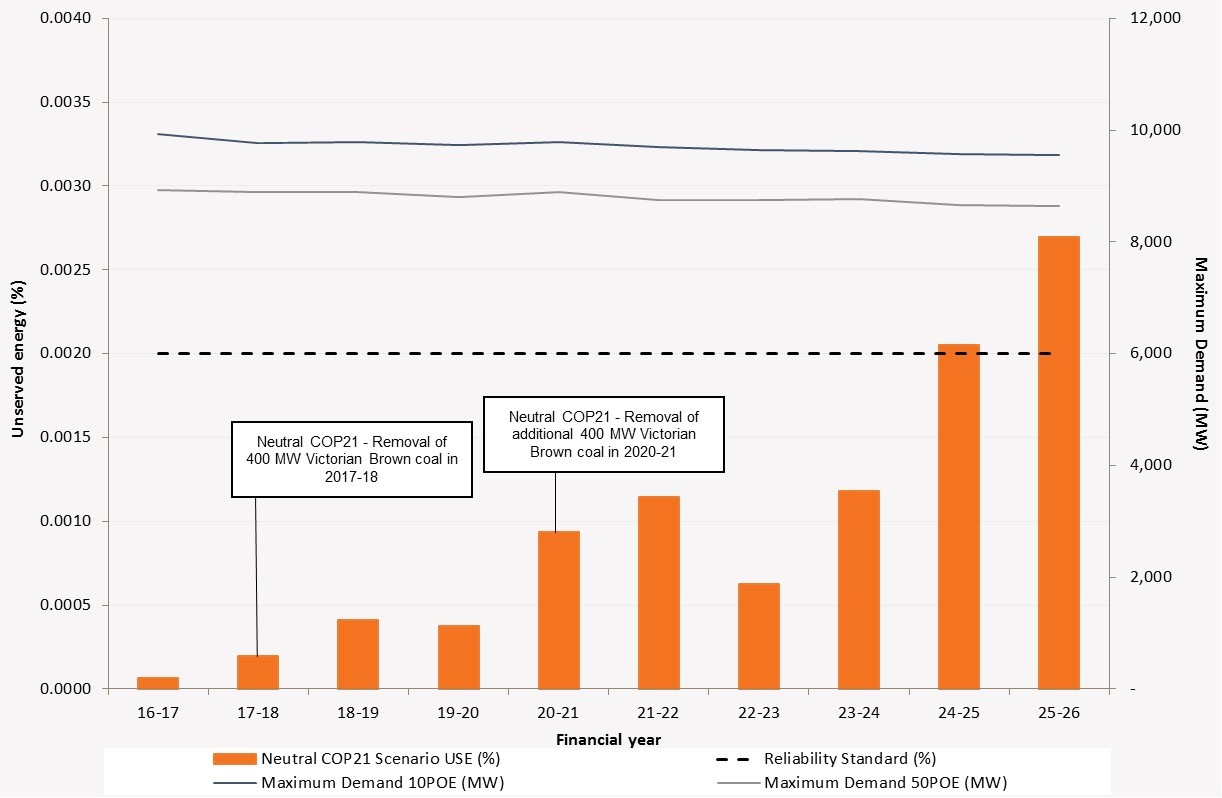 After the announcement of the closure of Hazelwood, AEMO released an updated view of Victoria’s power reliability and security[5]. AEMO finds that the market will be tight during times of peak demand but that the NEM will continue to operate reliably after the Hazelwood plant exit by the end of March 2017. From summer 2017-18, under very hot weather conditions (resulting in high peak demand), additional supply or demand response may be required to meet Victoria and South Australia’s energy demand. AEMO highlighted the risk if peak demand conditions coincide with low wind availability, or generation or transmission outages and set out additional actions it may take to maintain security and reliability.

AEMO’s analysis also assumes that gas generators in Victoria can transport gas if and when they need to generate. In reality, gas transport for intermittent use by gas generators is difficult to procure with most gas transport services written on long-term contracts, making it challenging to get significant volumes of short term transportation for occasional use for periodic gas electricity generation.

In an interconnected NEM, decisions taken in one region have impacts in other regions. The reduction in low cost and dispatchable generation from Victoria may have flow on impacts for South Australia. South Australia is heavily dependent on Victoria, through the interconnector, for power when wind generation is low. South Australia’s interconnection to Victoria also played a key role in restoring power after the system black event of September 2016. The announced closure of the Hazelwood power station highlights the need for a clear national energy and climate policy to guide the decarbonisation of Australia’s electricity supply.

The impact on prices and security of the exit of Hazelwood is uncertain, with estimates of the impacts ranging widely, and speculation on secondary impacts on demand also ranging widely. IES Advisory Services released estimates of wholesale price increases after the closure, reporting that the increase translates to a $2.50 per week or 11 per cent increase for the average Victorian household[6]. Frontier Economics has modelled the exit of a large coal fired generator from Victoria under a payment for closure policy scenario. The modelling results indicate short term wholesale price rises driven by the market adjusting to the new supply function in the region. Frontier estimate increases the retail price between 3 per cent and 25 per cent over a number of years.

Reputex also modelled the impacts of the payment for closure policy[8], and using a different approach, estimated an insignificant impact of a large generator closing.

“Our modelling estimates the corresponding increase in retail prices… with a rise of only 0.2 per cent to 1.3 per cent[9].”

South Australia provides an indicator of the market adjustments after the exit of a large baseload generator from a region. A consumer’s energy bill includes the cost of energy traded on long term contracts (firm generation) and a portion of energy that is traded on the spot market price. Long-term contracts allow generators and retailers to hedge their risk of exposure to volatile spot market prices. After the announcement of the closure of Northern power station, forward prices for baseload energy increased from around $66 to $90 in two months- well above other regions at the same time. In anticipation of the reduction in supply of firm capacity in Victoria, FY18 Victorian baseload futures have increased 33 per cent to $66 MWh, up from $50 MWh in July 2016[10]. But Hazelwood also supplies to other States, and represents 12 per cent of the combined firm capacity for South Australia and Victoria[11]. This means that futures prices in South Australia can be expected to increase as firm capacity becomes scarcer after the closure.

The skills needs of new generation technologies are substantially different in number and type of occupations required for coal fired generation[12]. As we described in Energy Insider in June 2016, new renewable generation in wind and solar plant generally requires fewer ongoing staff, once construction is complete. Based on the available information, we estimate that there will be around 1,611 FTE permanent jobs lost from the closure of thermal generation between 2011 and 2023 (not including Hazelwood), replaced by 398 FTE permanent jobs in new large-scale renewable generation[13]. There will be an additional 5,213 short-term contracted construction jobs over this time, which we estimate translates to 579 FTE construction jobs over the dedicated period. 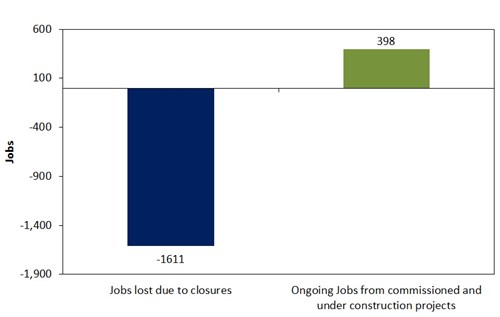 Identifying and providing the right skills for new and existing jobs can smooth transitions to decarbonise the economy and ensure that new opportunities benefit a broader share of society.  A shortage of professionals with cutting-edge skills in energy efficiency, renewable power engineering and construction would be a major obstacle to the efficient implementation of national and state strategies to cut emissions through renewable generation targets.

In 2011, the International Labour Organisation (ILO) found that problems with skills supply for renewable energy appear to occur mainly where there are disruptive changes in demand from renewable energy sectors. In Australia, this may occur as policy changes or policy uncertainty play out at the state and national level, making it difficult for business and training providers to plan for the increase in demand for skills.

“Initially, a disruptive change in demand for skills often comes about where activity in a renewable energy sector takes off quickly, causing demand for labour to switch suddenly from a trivial level to a substantial level.

Neither the Queensland Government nor the Victorian Government have set out a strategy to deal with the skills shortages likely to be created by the lumpy procurement under each Government’s respective renewable energy target policies. As the ILO highlighted in 2011, Governments planning the rollout of renewable energy capacity should build a skills component into their plans to avoid costly constraints on labour productivity due to skills shortages. Table 1 outlines the ILO’s identified occupations in renewable energy that are difficult to fill, requiring greater foresight and planning to put in place specialist training.

Table 1: Occupations identified as difficult to fill in renewable energy

Note: information collected through the REN Alliance’s survey among members.

The Victorian Government’s Infrastructure Strategy to 2045-46 sets out some of the expected changes in employment in each region under a constraint on emissions (Figure 3). While this analysis is not directly comparable to the current situation (without a carbon constraint mechanism and with stronger renewable energy target commitments at the state level) it is telling of the impact on the regions. Employment in Gippsland would fall by the most of all regions outside of Melbourne, reflecting its role as the home of Victoria’s coal mining and coal fired electricity generation. However, the fall in employment would be partially offset by other industries in the region, such as agriculture.

Figure 3: employment impacts by region in Victoria under a carbon price scenario, relative to base case in 2045-46 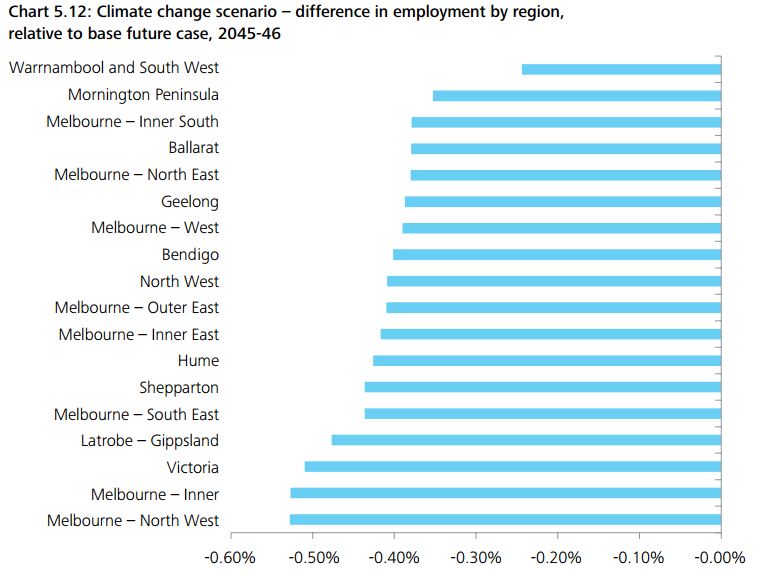 The overall impact on employment in energy generation will be determined by the type of energy generation industries that grow, and their relative labour intensity. Similarly, higher electricity prices flow onto other industries that pay for electricity as a cost of production. Under a carbon constraint scenario in Victoria, higher employment in light (labour intensive) manufacturing is offset by lower employment in highly emissions intensive manufacturing industries, such as the aluminium and non‑ferrous metals industries.

[1] Engie, 2016, Hazelwood power station in Australia to close at the end of March 2017, media release 3/11/2016, http://www.engie.com/en/journalists/press-releases/hazelwood-power-station-australia/

[8] Reputex, April 2016, Powering Up or Powering Down? Electricity price impacts of the proposed exit of coal generation from the NEM, http://www.reputex.com/research-insights/powering-up-or-powering-down-electricity-price-impacts-of-coal-generation-exit-from-the-nem/

[9] Reputex, April 2016, Powering Up or Powering Down? Electricity price impacts of the proposed exit of coal generation from the NEM, http://www.reputex.com/research-insights/powering-up-or-powering-down-electricity-price-impacts-of-coal-generation-exit-from-the-nem/, page 15