Interconnection: How does Australia and Europe compare?

The challenge of accommodating increasing amounts of renewable generation while maintaining supply security and ensuring affordability is not unique to Australia. More interconnectors are touted as an option in Australia despite the often long distances and relatively small demand centres, making it a costly proposition.

In contrast Europe, with its much shorter distances and high demand centres, is considering an array of potential interconnectors. In fact the European Commission has set targets for the amount of power produced that should be capable of being sent across jurisdictions. The goal is to create a single Europe-wide electricity market and ensure smooth incorporation of renewable energy. Last year alone there were 27 interconnector projects allocated grants in the EU. Less than a third of those were allocated for actual construction works, while the rest of the funding is to support studies into the feasibility of specific interconnectors.

Despite this work, the EU has expressed concern about the potential cost of interconnectors, which could reach as much €40 billion (AUD $60 billion) for a 10 per cent interconnection target by 2020. That target will require EU members to have enough electricity cables in place to allow at least 10 per cent of the electricity produced in a jurisdiction to be transported to neighbouring countries.

Interconnectors can improve the cost-effectiveness of power grids although these can only be provided if the benefits offset the construction costs. Cost of interconnectors can be high with the Commission estimating that €40 billion will be needed to meet the 10 per cent interconnection target[iv]. This high price is mainly due to the technical constraints of laying cables across mountains and under seas.

The European Commission has drawn up a list of 195 key energy projects to better integrate the EU energy market and reach the EU’s energy policy objectives of affordable, secure and sustainable energy.  The financial support available to interconnector projects totals €5.35 billion from the Connecting Europe Facility (CEF) with this funding designed to help fast track the projects and encourage private investors.

In 2016, there was a total of €707 million in grants allocated to 27 projects with eight of those grants going to construction works and 19 going into project studies. Figure 1 and 2 below show the proposed and completed projects since the CEF commenced in 2014. 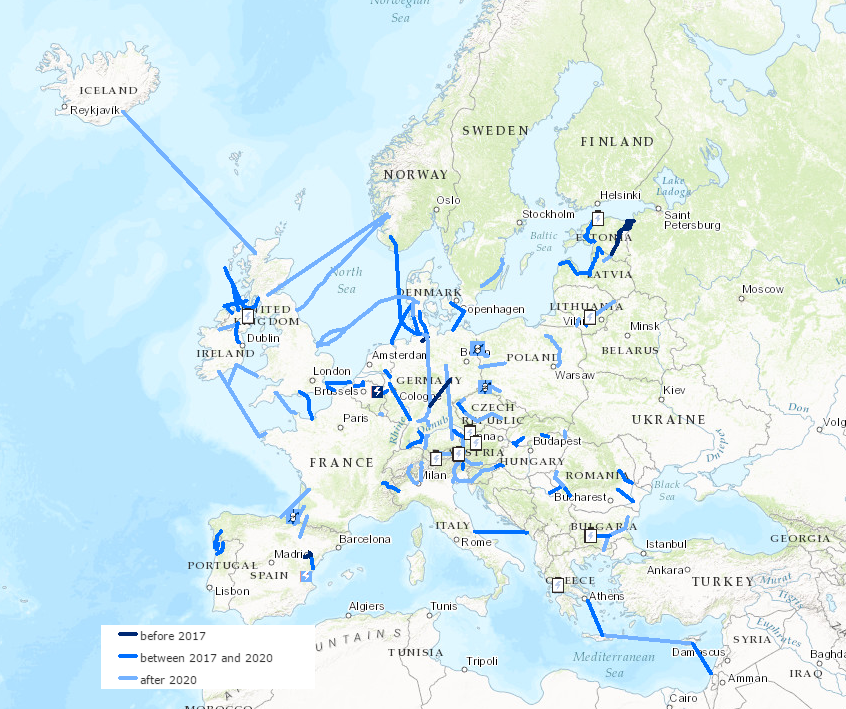 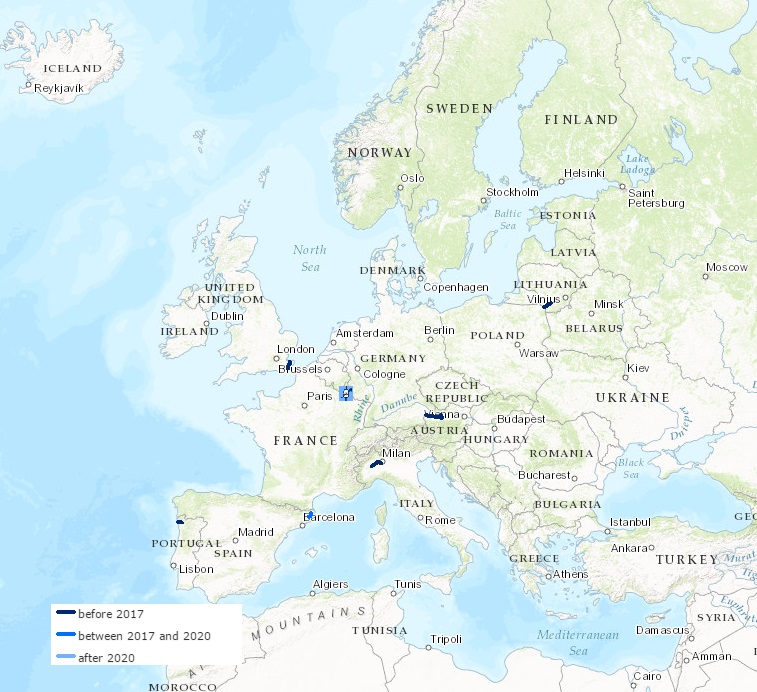 Denmark is an example of one country that has already met the European Commission’s requirements. Its interconnection capacity with its neighbors is equivalent to its full installed generation capacity. Its power links to Germany, Norway and Sweden allow the Danish energy system to manage the variability and uncertainty of a large wind power capacity.

Spain is one of the countries that will need to increase its power links with neighbours. While Spain produces large amounts of solar and wind power it currently cannot provide surplus electricity to the rest of Europe because of its limited interconnection capacity. In 2015, an upgrade to the Iberian Peninsula’s DC interconnector with France doubled the existing electricity interconnection from 1400 MW to 2800 MW[vii]. The project represented a total investment of €700 million, receiving €255 million EU support under the European Energy Programme for Recovery. The underground connection between France and Spain took 14 years to complete, and cost seven times more than originally budgeted.

Germany is also likely to become more reliant on interconnectors as it continues its Energiewende policy that seeks to replace fossil fuel and nuclear generation with renewables. Germany needs to build 1,800 kilometers of new lines to meet the European target, and this is a goal that it is currently still some way from achieving[viii].

The UK currently has 3.4 GW of interconnector capacity under construction across three projects, while a total of six projects listed in the UK are well down the regulatory process. No proposed projects over 500km have recently been built due mainly to the cost and the time required for completion.

The proponents of the 720km NSN line from Norway to the UK, however, have signed contracts with key suppliers and the project appears to be preparing for cable construction. The other ambitious interconnectors, namely the 720km Viking Link between the UK and Denmark and the 1,000km IceLink interconnector proposed to link the UK and Iceland, are only at the concept stage with both expected to take over 10 years and cost over €3.5 billion. Below are all the proposed, completed and projects under construction for the UK. Not all of these will receive funding under the European Commission interconnector target programme.

Figure 3: EU to UK interconnectors – proposed, under construction and operational[ix] 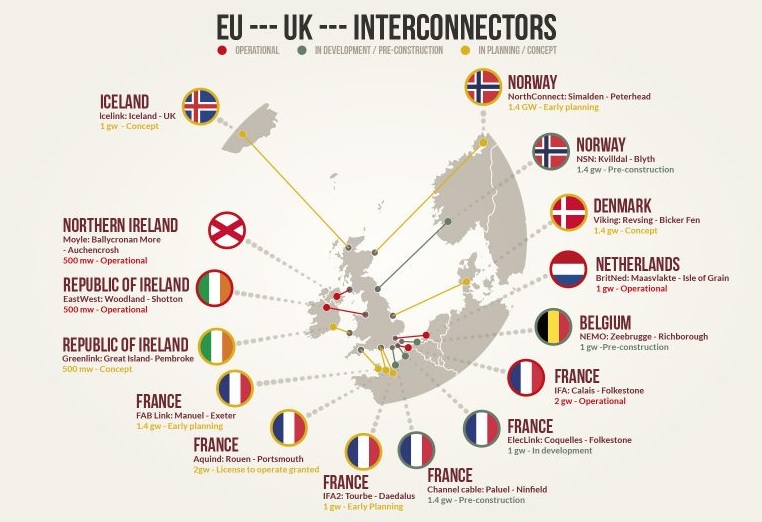 Figure 4 shows interconnector projects that are supported in principle under the UK’s cap and floor regime.

Figure 4: Interconnectors supported in principle under the cap and floor regime in the UK[x] 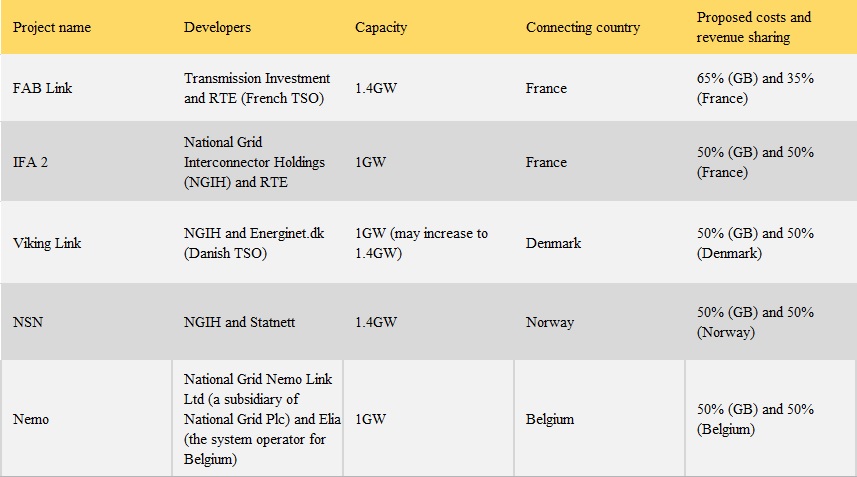 How does this compare to Australia?

With Australia facing a similar transition to Europe’s energy sector to achieve deep cuts in its greenhouse gas emissions, the construction of additional interconnectors is being debated.

There are currently six interconnectors linking the five National Electricity Market (NEM) states. In contrast, Germany is connected to eight other energy markets. South Australia and Denmark have amongst the highest per capita wind generation capacity. South Australia is connected to Victoria by two transmission lines, which allow it to source a maximum of around 23 per cent of peak load from Victoria, while Denmark is able to source 100 per cent of its electricity from neighboring countries.

Unless the benefits offset the large construction costs, the business case to develop new interconnectors could be challenging. Europe has proposed a number of large interconnectors although they also have one of the world’s densest populated power grids and in most cases the completed interconnectors have been smaller in length and MW size.

Figure 5: Projected and Final costs for the construction of interconnectors[xii]

AEMO, however, has identified potential benefits to electricity customers from development of additional interconnectors and estimated that six potential interconnector scenarios would have a positive Benefit to Cost Ratio (BCR). AEMO’s preliminary assessment is that these interconnectors would lead to downward pressure on customer bills by allowing access to more efficient generation sources. Most interconnectors in Australia have been built under a Regulatory Investment Test. If the AER approves the business case, the full cost is recovered from consumers over the expected life of the asset. This means the proponents do not face the risk of the benefits turning out to be lower than the costs.