On 29 March this year Westinghouse Electric Corporation filed for Chapter 11 bankruptcy in the US after running into problems with two nuclear power projects.  Westinghouse is a name synonymous with the beginnings of the 20th century’s electricity system. It was the George Westinghouse-advocated alternating current that won the “War of Currents” in the late 19th century against the competing direct current which was backed by Thomas Edison (another iconic name of the electricity industry, Nikola Tesla, was brought in by Edison to help address issues with direct current, but ended up siding with the AC option[i]).

Westinghouse has also been integral to the development of nuclear power – it designed and developed the world’s first full-scale commercial pressurized water reactor in 1957 and claims that 50 per cent of the world commercial nuclear fleet use Westinghouse technology[ii].

Toshiba acquired Westinghouse in 2006 and, in a twist of fate, beat out General Electric (GE) - GE was the company formed via the merger of the Thomas Edison’s Edison General Electric Company and the Thomson-Houston Company.

Since then Westinghouse’s AP1000 pressurised water reactor has been touted as industry leading and the way of the future for nuclear plants in the 21st century. The design uses modular-construction techniques with the claimed benefits of shortened construction schedules and reduced onsite workforce.

Two years after becoming part of Toshiba, Westinghouse began work on two US AP1000 projects – the Allen W. Vogtle Electric Generating Plant (Vogtle project) near Augusta, Georgia and the Virgil C. Summer Nuclear Station (VC Summer project) near Columbia, South Carolina – the first nuclear nuclear plants to be built in the US in the past 30 years[iii]. Both projects involve the installation of two 1117 MW units and are being developed for a consortium in Georgia led by Georgia Power, a unit of Southern Company, and Scana Energy in South Carolina respectively. Ground was broken for the projects in 2011.

The VC Summer units were expected to start generating electricity in 2017 and 2018[iv], while the Vogtle reactors were expected to be online in 2019 and 2020. Westinghouse initially used CB&I Stone & Webster (S&W) for on-site engineering, construction and procurement.

Instead of leading the way on a nuclear revival, however, Westinghouse sent shock waves through the nuclear industry with its Chapter 11 filing in March. It is another set-back for the nuclear industry, at a time when it should be benefiting from the need to reduce carbon emissions from base load power generation. Westinghouse blamed “unforeseen challenges”[v] that significantly delayed and increased the cost of construction, potentially exposing it to billions of dollars in either cost overruns to complete the projects or penalties and liabilities if the projects are abandoned. The plants are billions of dollars over budget and at least three years behind schedule, and may not be completed[vi].

So what were the “unforeseen challenges” that led to Westinghouse’s current wars?

In its Chapter 11 filing, Westinghouse has pointed to regulatory intervention by the US Nuclear Regulatory Commission (NRC), which required changes to reactor design and licensing for some of the issues with the projects.

In March 2002 the NRC reviewed Westinghouse’s new AP1000 design and formally approved the original design certificate at the end of 2005. There were then a series of additional revisions to the design over several years with the NRC certifying an amended standard plant design and publishing a final rule in December 2011[vii].

Some of the NRC regulator changes stemmed from the 11 September 2001 terrorist attacks in New York, a decade before work on the reactors began.  The changes were requested between 2009 and 2011 and this was after the engineering procurement and construction (EPC) agreements for the two power stations had been finalised.

Westinghouse said “These new requirements and safety measures created additional, unanticipated engineering challenges that resulted in increased costs and delays on the US AP1000 Projects and other AP1000 projects worldwide.

“The design changes delayed issuance of a combined licence to start the AP1000 projects until early 2012, which meant the first concrete wasn’t poured until 2013.”

Westinghouse is not alone in pointing to the regulatory issues that have confronted nuclear developments in America. US think tank, The Breakthrough Institute, has argued that the US regulatory environment has been a brake on new nuclear builds and innovation in design.

In its paper “How to make nuclear cheap” it writes, “While the NRC continues to represent the global gold standard for effective and comprehensive regulation of nuclear energy, today’s process of licensing a new nuclear technology is so costly and arduous as to largely foreclose the possibility of licensing for all but the largest and most established nuclear companies. The NRC is legally required to recover its costs through fees charged to applicants. For light water SMR designs, several companies have estimated the costs for licensing alone to exceed $200 million. For Gen IV reactors, developers will first have to pay the NRC by the hour to understand these novel designs and develop rules for licensing them, in addition to bearing the later cost of licensing.”[viii]

It has also argued that US governments have not been willing to “properly value” the zero-carbon electricity that nuclear plants produce and that regulation should follow a staged approach where designs are evaluated earlier and more often in the development phase.  “Currently, the first-mover disadvantages are too great, where companies shoulder the risk of regulatory decisions that can make or break a new technology.”

Since those comments there has been legislative moves to change the regulatory landscape particularly for new reactor designs and the NRC has also issued a vision and strategy to ensure it is ready to “effectively and efficiently review and regulate advanced reactors”, specifically non-light water reactors[ix].

The US Congress is currently considering four bills that would support the commercialization of new nuclear reactor designs by enhancing research and development and direct the NRC to establish a licensing framework for advanced reactors[x]. 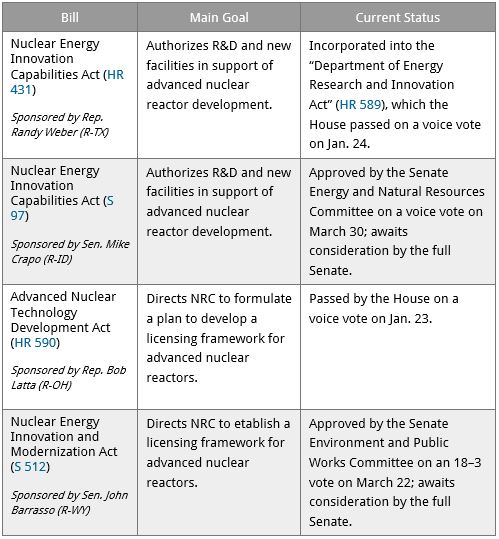 In addition, to the more onerous regulatory requirements post the 9/11 attacks and Fukushima in 2011, a loss of critical skills in nuclear plant construction have been highlighted. With no new plants built on the ground in the US for 30 years the lack of necessary skills led to higher costs.

Richard Nephew, a professor at the Centre on Global Energy Policy, at Columbia University told The Guardian newspaper: “I don’t think it is necessarily because of an inherent issue of US skills but rather the lack of practice. There simply have not been as many new reactor builds in the US and this has reduced the overall pool of skilled labor, no question.”[xi]

Some of the blame is pointed at Westinghouse’s use of S&W as its main contractor for the plant build. S&W had been bought out of bankruptcy and was an old nuclear company that had built US nuclear plants between the 1950s-1970s. One issue - S&W had no real nuclear assets left, and no staff with the experience to pull off the first new nuclear build in 30 years.[xii]

S&W was bought by Westinghouse in a bid to better manage its exposure to the nuclear builds. As part of the deal to acquire S&W Westinghouse agreed to assume S&W’s current and future liabilities relating to the US AP1000 projects, including liabilities for cost overruns.

Squabbling between S&Ws parent, CB&I and Westinghouse has caused further problems and is now the subject of a Delaware Supreme Court case [xiii].

In a bid to get its US projects back on track Westinghouse, as well as acquiring S&W, also appointed Fluor Corporation as lead contractor. Fluor Corporation is a US-based global engineering and construction company with knowledge and experience in nuclear plant builds. Westinghouse and Fluor made a preliminary estimate that completion of the two nuclear plants on schedule would involve additional labour costs of $3.7 billion. Their preliminary estimate of total additional costs of approximately $6.1 billion “could not be sustained by Westinghouse” [xiv].

Where to from here remains unclear for the US projects. It's unlikely that Westinghouse’s bankruptcy will stop new nuclear builds in America, but it may, according to Professor Nephew, push it towards a different approach using smaller, modular reactors or less complicated designs.

And abandonment of the US projects is an “explicit option” - in the case of the Vogtle project, Stan Wise, Chairman of Georgia’s Public Service Commission, pointed out that it is “possible…that Plant Vogtle just doesn’t get finished at all”[xv].

Westinghouse had believed that its AP1000 design could overcome the problems of cost increases and lengthy construction periods. They may have been overly optimistic; they may have also made a bad choice in contractor. They certainly underestimated the regulatory environment, highlighting the problem of regulatory revisions over the course of several years after the original formal design approval - revisions and delays after the engineering and procurement agreements were finalised.

[i] Edison vs Westinghouse: a shocking rivalry, http://www.smithsonianmag.com/history/edison-vs-westinghouse-a-shocking-rivalry-102146036/, Oct 2011