This year is shaping up as significant on the Victorian energy policy front. The Victorian Government is expected to release new emissions reduction targets for 2020 and 2025 in their new Renewable Energy Action plan which is expected to be released in May. Additionally, the Essential Services Commission (ESC) is currently reviewing the solar feed-in-tariff, while the Supporting Customers, Avoiding Labels Energy Hardship Inquiry report was provided to the Victorian Energy Minister, Lily D'Ambrosio, in mid-February. The Australian Energy Regulator (AER) is also obliged to rule on Victorian DNSPs’ proposals for more cost reflective tariffs.

As foreshadowed in the Roadmap, the Plan is expected to address development opportunities in four priority areas:

In setting a Victorian emissions reduction target for 2020 and 2025 target, the Victorian Government needs to be mindful of a number of critical issues. As has been shown with the national Renewable Energy Target (RET), oversupply in generation due to changes in energy demand can mean that targets can eventually become higher or lower than the original aim.

The Victorian target may require more investment than what is required in national RET. Banks are unlikely to support any new renewable energy projects unless they are underwritten by guaranteed power purchase contracts. This is unlikely under the current market conditions of chronic oversupply of electricity in Victoria. A key factor for the oversupply in generation has been the decline in demand.

Electricity demand is continuing to fall in Victoria, unlike the flattening of demand across the NEM, mainly due to Queensland LNG coming online. 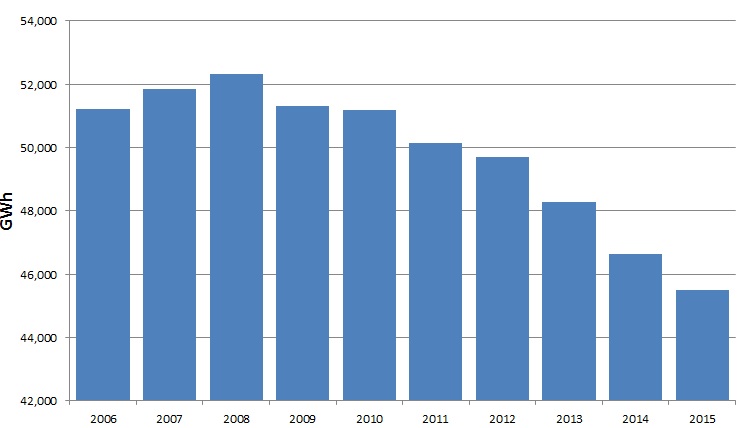 If the prospective electricity generation projects trend is an indication of future projects, the Victorian government will predominately focus on wind and solar developments. According to the most recent Australian Energy Council analysis over 80 per cent of prospective electricity generation projects currently in Victoria come from wind and solar. 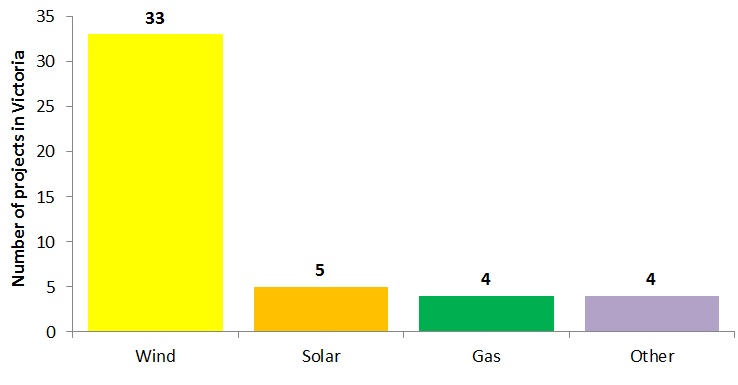 Since 2012, Mortons Lane wind farm 19.5 MW, Bald Hills wind farm 106.6 MW, Mount Mercer Wind Farm 131 MW, Macarthur Wind Farm 420MW and Altona gas upgrade 21 MW have added capacity to Victoria’s market. Since then however in August 2014 the Energy Brix Power station 170 MW and in August 2015 the Anglesea Power station 150 MW have been shut down in Victoria. Despite the closures there is still an oversupply in generation across the state.

Planning for the future of Victoria’s energy system is important, to ensure that the state is in the best position to meet its economic, environmental and social needs over the long term. Victorians want a reliable, affordable and sustainable electricity system. It is important that any actions taken by the Victorian Government as part of the action plan are coupled with clear outcomes trying to be achieved.

Review of solar feed in tariff

The Essential Services Commission (ESC) has released a final decision to adopt from 1 January 2016 a minimum feed-in tariff rate of 5 cents per kilowatt hour (c/kWh). This minimum rate will apply to all customers currently receiving the feed-in tariff, introduced on 1 January 2013 and in 2014 it was set at 6.2 cents for 2015.

The ESC’s Inquiry into the True Value of Distributed Generation to Victorian Consumers is ongoing, and the ESC received amended Terms of Reference on 22 December 2015. A Final Report is not due to be provided to the government until February 2017.

The Australian Energy Regulator (AER) is looking to move to more cost reflective tariffs nationally. At the end of 2015 the AER received the first round of Tariff Structure Statement (TSS) proposals from the Victorian electricity distribution businesses, with the draft decisions released on 22 February 2016. The decisions essentially noted that the Victorian decisions to override the national rule and require more cost reflective tariffs to be opt in only meant that the AER was obliged to reject the TSSs. There was no indication from the AER of how they would assess trade-offs between economically pure cost-reflectivity and practical approaches to assist the reforms, such as alignment across DNSPs and reducing volatility in network charges by not focussing purely on a few peak hours a year.

The distributors are required to submit revised Tariff Structure Statement proposals by 29 April 2016, with a final decision due by 29 July 2016 on the TSS proposals.

The ESC has proposed an overhaul of the regulatory framework that sets out how energy retailers assist customers struggling to pay their energy bills. The Commission’s report – Supporting Customers, Avoiding Labels Energy Hardship Inquiry – was provided to the Victorian Minister in mid-February 2016. The Minister has 30 days to respond to the ESC report.

Feb 04 2021
Read Analysis
GET IN TOUCH
Do you have a question or comment for AEC?