Reports of the UK’s energy crisis reads more like something from dystopian fiction. Spiralling gas prices, wholesale power price spikes, the collapse of energy retailers squeezed between price caps and high spot prices, as well as industrial plants having to curtail operations and concerns about energy costs to homes as the UK enters winter.

So how did it get to this? There has been an extraordinary confluence of factors, some homegrown, some the result of international factors, but regardless it is likely to see questions around the UK’s management of its energy transition and the adequacy of policy measures, such as retail price caps.

The main catalyst has been a dramatic jump in gas prices due to supply issues. S&P Global reported month-ahead gas prices were up 420 per cent since the start of the year. Figure 1 illustrates the dramatic increase in gas prices this year. The gas price has also had a significant impact on wholesale electricity prices which have spiked dramatically (see figure 2) given the key role of gas-fired generation in the UK’s grid. 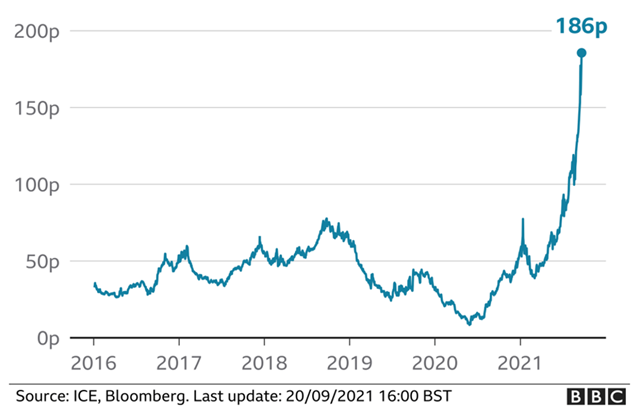 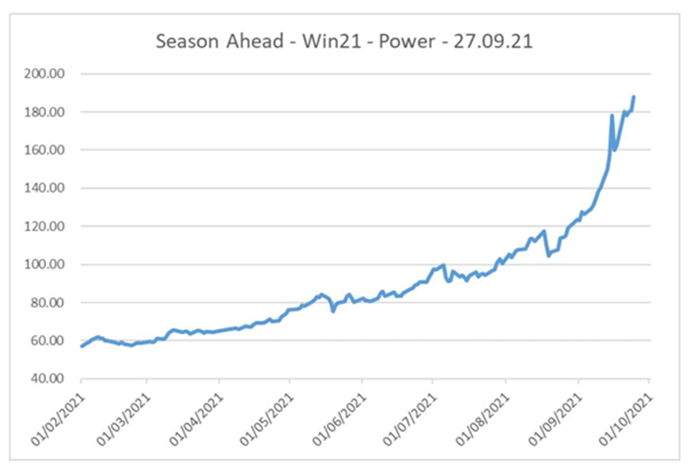 Gas supply issues are being experienced across Europe and the US, which is a big supplier of gas, also experiencing difficulties and seeing higher gas prices. As a result, power prices in Germany and France also jumped by around 40 per cent recently. In many countries, including Britain and Spain, governments have introduced emergency measures to protect consumers, while some industry has ramped down including aluminium smelters in Mexico and fertiliser plants in Britain.

The increase in economic activity as COVID restrictions eased, as well as colder conditions in northern Asia and Europe last winter has pushed up demand for gas. In Asia prices quadrupled and LNG destined for Europe was diverted to Asia. It meant Europe had to draw down its gas reserves.

The UK, the Economist states, has become “painfully dependent on natural-gas imports, especially in calm weather”. A large-scale gas storage facility (Rough) closed in 2017 and the UK now has no large-scale sites and can only store 2 per cent of its annual demand compared to other big gas importers who store between 20-30 per cent.

As well as its use for generation the UK is also highly dependent on gas for heating the vast majority of homes (85 per cent).

The doldrums (and more)

While the UK has 14GW of solar PV installed it only provided around 2 per cent of generated electricity last year, while its seven nuclear plants provided nearly 20 per cent of electricity in 2020.

The challenges this year have been compounded by less wind being available with lower than average wind speeds reported – onshore wind generation was down 23 per cent and offshore wind fell 16 per cent in the first quarter compared to the corresponding period in 2020.

Lower daily average sun hours has meant solar output is down 20 per cent, while lower rainfall impacted hydro plants (output down 34 per cent). As a result, the UK’s overall generation from renewable sources was down 20 per cent in the first quarter compared to a year earlier (see Figure 3). 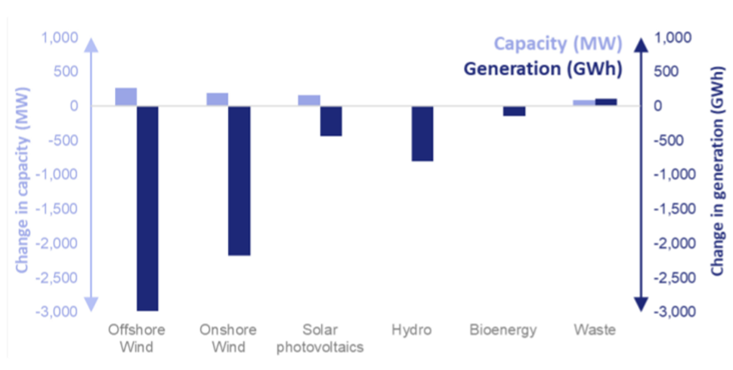 The UK’s 8GW of nuclear capacity (said to be increasingly unreliable and running at closer to 5GW due to outages) has most units undergoing maintenance. There have also been some gas capacity unavailable.

The UK has moved away from coal-fired generation and mandated a closure date of 1 October 2024. Coal generation provided only around 2 per cent of its electricity needs last year (down from 40 per cent in 2012). The energy crisis has led to questions whether coal units should be kept in reserve until closer to the final phase out date.

It has three operating plants include the 2000MW West Burton A (expected to end operation in September 2022) and the 2000MW Ratcliffe power station, where one of its four 500MW units was due to close at the end of September next year with the remaining units expected to close in September 2024. The third plant, Drax’s Selby power station in North Yorkshire has a capacity of 3,906 megawatts (MW) but four of the plant’s six units (2595 MW) were converted to using compressed wood pellets to generate electricity. The remaining two coal units ended commercial operation in March but were expected to remain available for emergency needs until September 2022. In light of the current energy emergency the company has said it could keep these units operating beyond the planned closure date and the plants have already been called back into action recently.

As a result, the 35GW of gas-fired plant has been the UK's dominant price-setter and with the increased gas prices this has contributed to wholesale electricity price increases estimated at 250 per cent with high forward prices now being reported (see figure 2 above) while energy consultants Zenergi this week reported a day ahead price of  GBP166.10/MWh ($310/MWh) .

The change in generation mix and output in the UK is shown in figures 4 and 5. 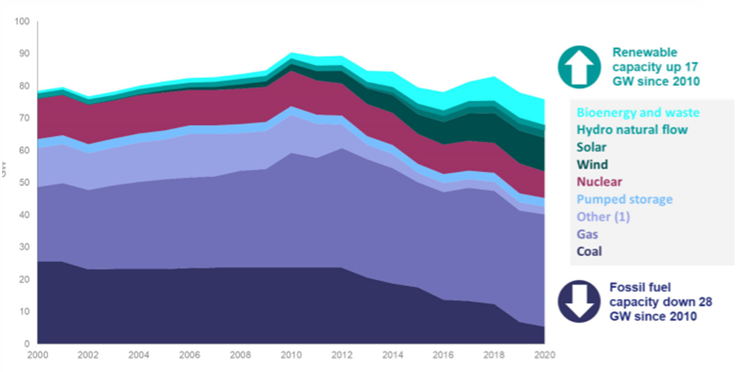 Adding to the stress on the system was a major fire that impacted Britain’s 2GW IFA1 interconnector with France.  National Grid said the fire and planned maintenance at the 2GW IFA1 interconnector site in Kent meant the cable was offline during September while half of its capacity – 1GW - is expected to be unavailable until late March 2022.

France is the UK’s biggest supplier of power through interconnectors (47 per cent of its imports in 2020). A second interconnector with France the 1GW IFA2 has continued at full capacity.

The UK imports and exports electricity via six subsea cables from France, Belgium, Ireland and Northern Ireland and the Netherlands with a capacity of 6GW. A seventh, the North Sea Link (1.4GW) to Norway is undergoing testing and a further interconnector, Viking Link, is under construction and planned to begin operating in 2023 (see map) 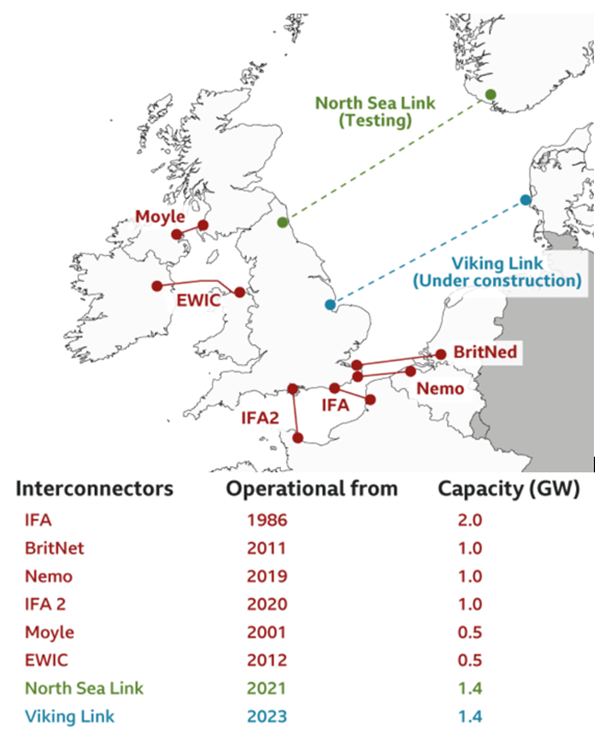 At the end of this pipeline of problems has been electricity retailers who have found themselves squeezed between higher wholesale prices and price caps. Twelve retailers have failed this year and more are expected to go out of business (at the end of March the UK had 49 retailers, but energy consultancy Baringa has said there may be “less than 10 suppliers by the time we come through winter”).

Even when the UK’s retail price cap increases in October it assumes an underlying wholesale price of £82/MWh ($153/MWh) well below the forward prices being reported (see figure 2). As Baringa note it effectively means a loss for every customer on a price cap with retailers.

Consultants EnAppSys estimated the household power bills would need to rise by more than £550 a year (more than $1000) if gas prices stay high and with no government intervention. The UK’s price cap means average annual bill for gas and electricity will be limited to £1,277 ($2387) from next month and based on this analysis would have to go to £1,834 ($3429) if households were to cover the full costs of buying supplies today.

The UK’s largest energy retailers have warned suppliers could refuse to absorb the customers of failed rivals under the UK’s supplier of last resort mechanism unless the government comes back to negotiate a rescue package, arguing that intervention in the sector is unavoidable.

The price shocks and energy challenges are not going to ease significantly any time soon. And neither will debate about what has led to this position and assessment of previous and future policy measures.