On 6 September 2019, the UK System Operator, National Grid, published its final report into the widely reported electricity interruptions on 9 August[i]. The report describes in detail the events of that day and proposes sensibly measured responses.

The event has parallels to many actual events in other power systems, including Australia. Some features of it are relevant to the challenges of integrating non-traditional technologies, whilst others relate to more conventional challenges and community misunderstandings that power systems have always suffered, and probably always will. Here we take a look at the report.

What happened on the day

Like most major power system disturbances, it came out of the blue on an otherwise unremarkable day of modest demand with plenty of spare generation. It is bewildering that policy makers focus so heavily on resource adequacy when the vast majority of blackouts, in Australia as well as overseas, have entirely unrelated causes. And this is no exception.

In this case the trigger was a lightning strike which caused a brief short-circuit on a transmission line. The line’s protection acted to quickly disconnect the faulted line from the rest of the grid, and 20 seconds later, once the ionised air from the lightning strike had dissipated, the line was automatically reconnected to the grid. This is an entirely normal event and power systems are designed to tolerate the brief voltage disturbance that occurs between the lightning strike and the line’s disconnection, which lasts a few tens of milliseconds.

However in this case some equipment did not operate as expected, and a total of 1,691 MW of generation disconnected, comprising a large off-shore windfarm (Hornsea), a Combined-Cycle Gas Turbine (CCGT) (Little Barton) and some distributed generation. The UK equivalent of Australia’s Frequency Control Ancillary Services (FCAS) had been set up to replace only the loss of 1,000MW at that time, and so the frequency fell substantially.

Just like what occurs in Australia when frequency falls beyond FCAS’ capacity, automatic under-frequency load shedding acted to save the system from collapse - 5 per cent of the load, or 1.1 million customers were shed, arresting the frequency decline. This is the first time in 10 years that this has happened in the UK, noting in Australia such events are more common.

The following graph shows the critical five minutes in detail and the way the frequency fell and recovered. 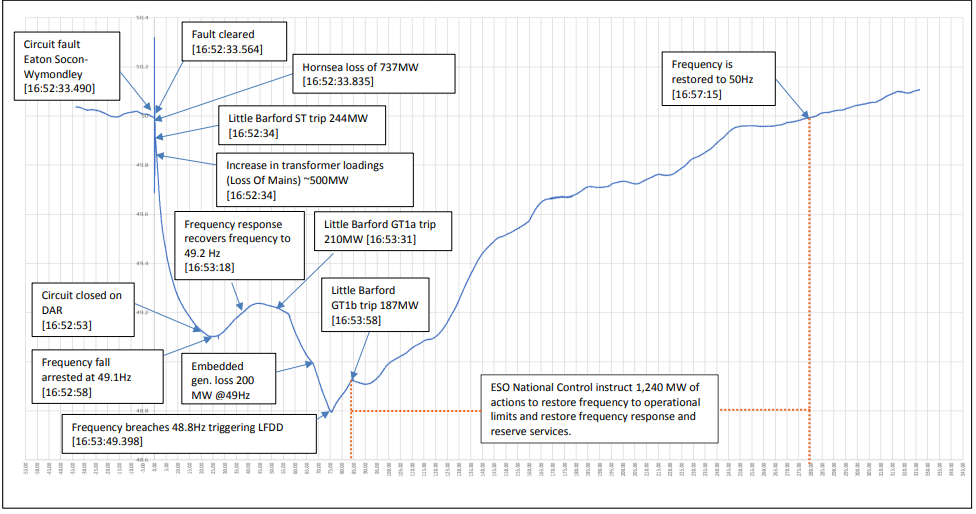 Why did the generators come off?

In brief, they shouldn’t have. Just like in Australia, large generators are expected to ride-through some power system disturbances such as a brief low voltage caused by a lightning strike. However, generating systems are very complex and operating through such disturbances is a substantial engineering challenge, especially for wind turbines.

Sometimes an unprecedented disturbance exposes a previously unknown design flaw – this was very much relevant to the failures that caused the South Australian system black[ii]. Sometimes an unusual operating condition at the generator makes it more vulnerable than its initial design. And sometimes simple bad luck is at play.

Although plants are obliged to be designed to ride-through disturbances, even a well operated plant can fail sometimes. Most generators do survive the vast majority of disturbances the grid throws at them, and most UK generators did on 9 August. Having two large generators independently but simultaneously failing to ride through is extremely rare and unfortunate.

In the Hornsea windfarm case, an outage of one of its offshore cables was relevant:

“The configuration of the Hornsea network, with one SGT and one offshore transmission system user asset (OTSUA Circuit) on outage, was a contributory factor as it created a weak internal network environment. Subsequently Orsted (the windfarm’s operator) have reviewed and reconfigured their network.

The wind turbine settings were standard settings from the manufacturer. During the incident, the turbine controllers reacted incorrectly due to an insufficiently damped electrical resonance in the subsynchronous frequency range, so that the local Hornsea voltage dropped and the turbines shut themselves down.”

The control systems have since been adjusted to withstand this situation in future.

In the case of the Little Barton CCGT, a measurement discrepancy led to a protection trip of the steam-turbine, and then subsequent problems caused the gas-turbines to shut down, which also should not happen, resulting in loss of the entire output of 641MW. Investigations into the root causes are not yet complete.

In the case of the loss of 462 MW of distributed generation, this performance was as designed. As in Australia, commercial-sized three-phase solar installations are required to install equipment that detects possible islanding conditions and shuts down the generation for safety reasons. The lightning strike triggered the Vector Shift protection (which identifies a sudden shift in the voltage waveform) of some generation, and others were disconnected due to Rate of Change of Frequency (RoCoF) protection (which responded to the rapid fall in frequency).

It is refreshing that a report produced only a few weeks after the event could contain such detail about the specific problems within the power stations. Such openness helps the industry apply remedies and helps to quickly restore community confidence. It suggests the UK market is operating within a cooperative technical culture where these generators do not feel threatened by litigation. Australian regulators should consider carefully the impacts that litigious approaches to technical compliance may have upon this valuable co-operative culture[iii].

What was the impact?

The measures that arrested the frequency fall all worked remarkably well. This included both the ancillary services paid to provide 1,000MW of support as well as the last-resort automatic under-frequency load shedding of ordinary customers. Customers were interrupted for a maximum of 45 minutes. This is infinitely better than the alternative of having the system collapse into a black system, and leads one to wonder why such a relatively modest power system event could gain international notoriety?

The main reason - the shutting down of electric trains and massive commuter stranding – cannot be fairly blamed on the power system. Trains are considered critical infrastructure and so were not part of the automatic load shedding system. In fact no trains’ power supplies were interrupted during the event. If you were standing at a tube platform, you wouldn’t have even seen a flicker in the lights.

Much of the UK rail system runs on alternating current (AC), and unfortunately some UK train classes were especially sensitive to the frequency disturbance and could not tolerate frequencies below 49.0Hz and shut down. The frequency nadir of 48.8 Hz is within the design parameters of the power system and critical loads need to tolerate frequencies below this. And to make matters worse, many of the trains needed an engineer to physically attend and reset the engine. Happening at peak-hour in a train-dependent country, this was enormously disruptive.

Thus the event exposed serious weaknesses in the UK rail system more than it did the UK’s power system.

A similar event has also happened in Australia. On 20 January 1997 a voltage disturbance, but well within power system standards, was caused by bushfire smoke short-circuiting a transmission line in the north of Melbourne. No load was shed. It was just after sunset, and at the time a one-day international cricket final was being played at the Melbourne Cricket Ground as well as Australian Open tennis at Rod Laver Arena. Unfortunately the main floodlights at both stadia had over-sensitive protection systems and were each disconnected. And just like the UK trains, play had to be stopped at both venues until the floodlights were reset and restarted – which took about twenty minutes.[iv] And like the UK, media reports unfairly blamed the fragility of the power system rather than the stadia’s lighting.

A disturbance triggering cascading generator interruptions is a common cause of major power systems events. The 2016 South Australian system black was a classic example of an unprecedented disturbance which certain classes of wind turbine failed to ride-through, that in turn caused the Victorian interconnector to overload, that in turn caused a system black. That event demonstrates the disaster that the UK’s automatic load-shedding was built to avoid, which it did successfully. Australia has had many events where, unlike the system black, automatic load shedding did act to successfully prevent a grid collapse, such as the major events of 25 August 2018 and 16 January 2007.

The National Grid report concludes that UK power system security standards should be reviewed “…to determine whether it would be appropriate to provide for higher levels of resilience in the electricity system. This should be done in a structured way to ensure a proper balancing of risks and costs.”

The last sentence is most important. It is crucial that electricity institutions do not over-react to ill-informed media and political discussions that inevitably follow load interruption events. In this case the focus should really be on the resilience of critical loads rather than the power system – and sensibly this is another of the report’s recommendations.

It would be foolish to impose additional costs on a power system just because some customers have installed excessively sensitive equipment. Indeed the flaws in the UK rail system were able to develop precisely because the UK has had no recent major frequency disturbance and a false sense of security had developed. In contrast, many other systems commonly experience lower frequencies than 48.8Hz, for example Tasmania, and yet its population do not experience major disruptions. It is likely that if UK were to spend customers’ money to make frequency events even rarer, then customers would simply respond by installing even more sensitive equipment.

[i] UK National Grid, Information about the 9 August power cut and the ESO

[iii] AER, South Australian windfarms in court over compliance issues during 2016 black out