Too many backseat drivers in the NEM?

Energy markets in Australia have been undermined by a decade of national policy failure.  Investment paralysis has resulted in the gradual worsening of all possible worlds: deteriorating reliability, increasing prices and little improvement in emissions. Frustrated by these conditions, it’s little wonder State Governments are looking to pull whatever levers they have at their disposal to try and minimise the harm. But are they really helping?

The South Australian Government has found itself at the painfully bleeding edge of renewables integration and sought to address this in March with a package of reforms. The proposed reforms include the building of a state owned gas generator, a subsidy for 100 MW of new storage technologies, accelerated gas exploration and a certificate scheme to increase the demand for firm generation inside the State.

The South Australian storage tender is now shortlisted, as the government tries to meet its summer 2017 deadline. It should be a useful addition to the renewable generators and a useful trial of how storage works at scale in a highly intermittent renewables grid. The Australian Energy Market Operator has already increased its minimum requirements for firm generation in South Australia, which would seem to be a much cheaper and easier solution to the indigenous certificate scheme proposed. In addition, a new $360 million government-owned emergency generator seems a little superfluous, given both units of Pelican Point are back online and AGL has announced it will build 210 MW of new gas generation by 2019.

Then in May the Tasmanian Government announced it would cap retail prices and subsidise electricity to commercial customers through its control of Hydro Tasmania and retailer Aurora. Good news for customers, bad news for inviting competition into their market. Choosing to insulate Tasmania from mainland energy market outcomes works against whatever business case there may have been for Basslink 2. The point of a second interconnector would have been to connect Tasmania even more closely to the mainland.

This week the Palaszczuk Government announced its Powering Queensland Plan, which also outlined a suite of reform measures aimed at solving a national market problem from a single jurisdiction.

The Plan included the following measures:

The removal of the cost of the Solar Bonus Scheme from electricity bills is welcome.  So too is the investigation into a potential restructuring of government-owned generators, although it makes little sense to create a third clean energy generator, when the possible benefits of reform come from a portfolio approach for all generation businesses. Directing Stanwell to lower wholesale prices will benefit retailers and customers in the short run, but increase investment risk in the longer run. It would be preferable if wholesale prices were lowered by structural reform rather than direct intervention.

Since July 2016 we have seen volume weighted average prices in all National Electricity Market (NEM) states reach more than $100/MWh on five occasions. This has been driven by factors such as firm generation retiring as more intermittent generation has entered the market, the need for more expensive short-term generation to fill supply gaps, higher fuel costs for such short-term generation, as well the absence of national energy policy certainty hampering investment decisions.

The change in volume weighted prices for South Australia, Queensland and Tasmania can be seen in Figure 1. 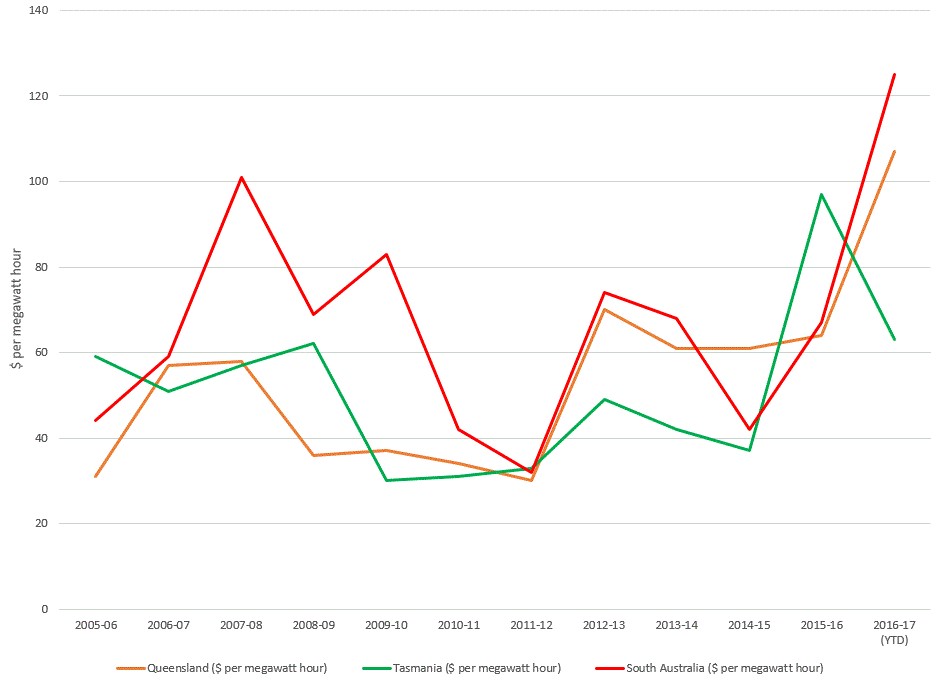 In the 2016-17 year to date, the steepest rises occurred in South Australia, Queensland and New South Wales.  But the market has been extremely volatile since winter 2015, according to the Australian Energy Regulator, particularly in South Australia, Queensland and Tasmania with 30 minute prices above $200/MWh an “unprecedented” 4000 times in 2015-16. Prices above that level were recorded another 2100 times in the current year to date.  Queensland reported record wholesale prices this year[ii], and in the first 10 weeks of 2017 Queensland prices rose 60 per cent[iii].

Given the backdrop of higher wholesale costs, along with reliability issues, the state interventions are understandable in a political context.  But they also have significant potential to impact on longer-term investment decisions for new generation and in the case of Queensland and Tasmania are effectively “robbing Peter to pay Paul” by compromising the returns of government-owned corporations in order to subsidise their customers.

The decisions to intervene have also come before completion of the Finkel Review into the security of the NEM and before any agreement has been reached on nationally coordinated measures that can steer the energy transformation.