The votes are in: Where to next for SA energy plans?

In the lead up to the South Australian election the former Premier Jay Weatherill declared that it would be a referendum on renewables[i].  That may have been an over statement, but there was no doubt that energy policy was a significant issue in the state’s election.

As noted in a previous EnergyInsider (“SA Energy Plans: Ebony and Ivory”) it is unsurprising that energy policy became a hot political battleground in the lead up to the March poll. Key factors are that South Australia has a partially interconnected grid with the highest penetration of intermittent renewables in the world. SA households and businesses have had to deal with rising power prices and increased risk of blackouts.

Detailed policies were put forward both before the campaigning began in earnest and then as the electioneering unfolded. The appointment of a new government and energy minister now provides an opportunity to review the state’s energy approach and return to a bipartisan energy strategy.

A review of the energy policy positions made in the lead-up and during the election, reveals both a range of sensible policy initiatives, as well as highlighting less than ideal energy market implications from other proposals. One key area of difference is in support for a national approach versus state-based initiatives. The Labor Government’s plan focused on SA control and self-sufficiency, which as noted in the review was not necessarily the best approach for the State nor the National Electricity Market (NEM). The SA Liberal Plan supports a national, market-based approach to energy policy rather than “going it alone”, which is welcome and likely to assist the COAG process in developing a workable National Energy Guarantee (NEG).

The SA energy plans review was prepared for the Australian Energy Council by wholesale energy markets consultant, Allan O’Neil. It outlines the key elements of the former government’s “Our Energy Plan”, which was unveiled in March last year, along with the proposals of the Liberal Party under its Liberal Energy Solution (LES). The review also assessed the election period announcements by both major parties as well as SA-BEST party proposals (given the pre-poll sentiment suggesting they could hold the balance of power).

The report flags that while some actions taken prior to the change of government cannot be easily reversed and other elements remain worthwhile, there is now an opportunity to take into account external developments that have occurred during the past 12 months and refine policy. These developments include:

It would be prudent to review the new government’s energy plans in light of these developments. Taking account of these changes and adjusting policies and initiatives, would help ensure that energy policy in SA remains “relevant and makes a positive contribution to the health of the NEM, and achieves the best outcome for South Australian customers and taxpayers,” the report states.  For example, the energy security target was superseded by the NEG.

The key energy challenges that policy needs to address in SA are:

Key differences between the former ALP Government’s original plan and the then Opposition’s LES are summarised in Table 1.

Table 1: Differences between the SA Labor Energy Plan and LES 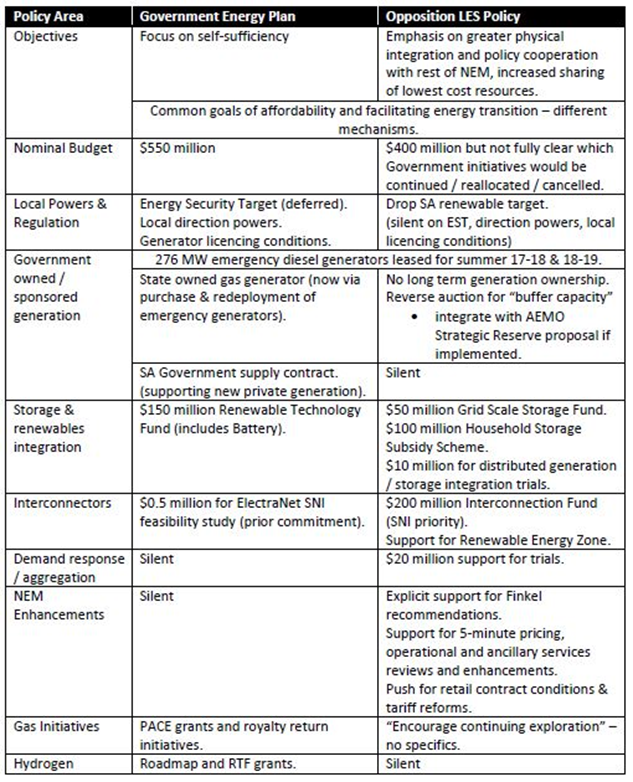 The key differences with the two sets of policies are:

Some of the LES’s specific initiatives, such as the grid scale storage fund and support for trials of renewable integration and demand response/aggregation “can be viewed as variations on similar policy philosophies in the Weatherill Government’s Energy Plan. Where it is silent it seems more than likely that actions taken to date will not be unwound”.

The report concludes that the LES’s focus on greater integration and cooperation with the NEM stakeholders and institutions to improve the NEM’s operation and pursue benefits from a stronger national grid with more interstate sharing of resources is welcome.

It says that the proposed allocation of $200 million to an interconnection fund with an initial focus on a particular interconnector raises questions about the extent to which a direct or indirect investment by government distorts existing NEM mechanisms for investment assessment and cost recovery of transmission investments.

The O’Neil review highlights that the LES presents “points of difference from the Energy Plan which are worth serious consideration, but also leaves ambiguous its stance on other important aspects of and actions already taken under the Plan. Resolving these ambiguities would greatly help in assessing its likely overall impacts.”

Click on the following links for a full copy of the report and addendum.

Dec 10 2020
Read Analysis
GET IN TOUCH
Do you have a question or comment for AEC?