The ins and outs of generation

The announcement by AGL Energy that it will defer the planned mothballing of four gas-fired turbines at the Torrens Island Power Station in South Australia (SA) has again highlighted the challenges involved in transforming our electricity supply.

AGL announced at the end of 2014 that the four units which made up the older Torrens Island A station with a capacity of 480MW would be taken out of service by 2017, based on the market outlook.

But the retirement of baseload plant in SA - with the decommissioning of Alinta Energy’s 544MW Northern and 240MW Playford B (which was previously mothballed) brown-coal fired generation at Port Augusta on 9 May  – led to changes in market conditions “to the extent that there has been a significant tightening of supply to the market”[i] and prompted AGL’s decision to defer.  AGL also pointed to the role that Torrens Island A would play in maintaining SA’s security of supply, which has come into stronger focus with the growth in SA of intermittent renewable generation.

In announcing the closure of its brown coal assets at Port Augusta, Alinta said key factors were a drop in demand as households became more energy efficient and the number of industrial customers fell, combined with the growth in renewable energy generation, which increased pressure on wholesale prices[ii]. Even though brown-coal is low cost, coal-fired generators have significant capital, operational and maintenance costs, which necessitate a high utilisation factor to remain economically viable.

Figure 1 provides an overview of the changes underway in Australia’s generation. It shows generation entry and exit from 2011-12. For simplicity, the analysis only includes prospective projects that are under construction or approved with set construction dates. 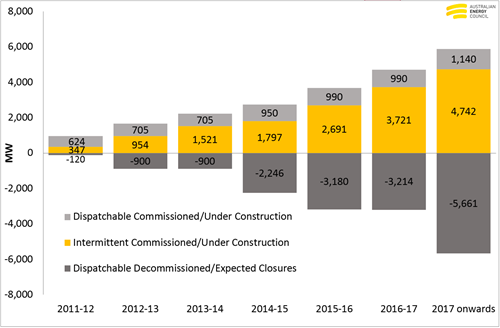 In the 2015-2016 financial year, Alcoa of Australia Limited advised that Anglesea Power Station in Victoria would be withdrawn from service following the closure of the Alcoa Point Henry aluminium smelter, which underpinned energy production in the facility in the past. This closure and the removal of the SA power stations permanently removed a cumulative 934 MW of coal-fired capacity from the National Electricity Market. In addition to these closures, the Liddell Power Station (2,000 MW) coal-fired power station will be retired by 2022.

The Renewable Energy Target, along with state-based renewable energy schemes, have supported an influx of intermittent generation. As shown in Figure 1, overall, 894 MW of new wind and solar has been publicly announced, completed or has been commissioned during 2015-16, while 1,030 MW of new projects are expected to be completed in 2016-17. 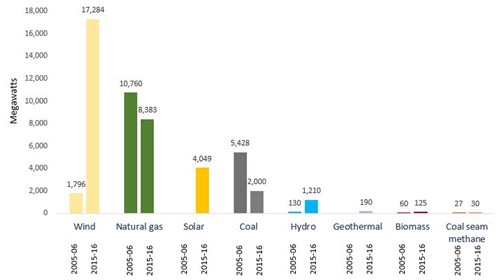 Note:     In 2005-06, the chart includes proposed, advanced planning and under construction projects

In 2015-16, the chart includes proposed, approved, advanced planning and under construction projects

In contrast in 2015-16, wind, gas and coal account for 51.9 per cent, 25.2 per cent and 6 per cent respectively of all prospective generation developments. With a number of government schemes supporting less emissions intensive technologies, the total of wind capacity proposed, approved, in advanced planning or under construction has increased 10-fold in 2015-16. South Australia is the leading jurisdiction for installed and proposed wind farms across Australia.

Figure 3 provides the total installed wind capacity in South Australia since 2003-04, as well as capacity under construction, along with its expected commissioning dates. 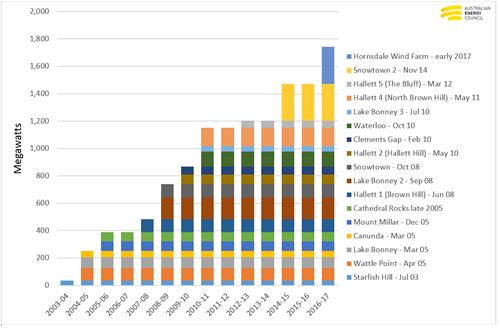 Note that nationally 6,230 MW of wind projects and 2,000 MW of black coal projects have been approved, but do not have construction dates. In South Australia 15 out of 18 prospective projects are wind powered and more than half of them have planning approval.