Like many other sectors, Australia’s electricity sector is undergoing rapid transformation. Smaller, modular, intermittent renewable generators are now replacing the large (mostly coal) thermal generators of the 20th century. This is driven both by cost (renewables are now the cheapest form of new generation) and the need to reduce greenhouse gas emissions.

For the past decade consumers have also begun playing an increasing role in the market. Around 1.8 million households and businesses now generate solar electricity, with the real potential to expand this into the provision of voltage and frequency services (from distributed storage technology) and/or towards more active demand management, taking advantage of the increasing differential in cost of electricity during sunny, windy times of abundance and dark and still times of scarcity.

Customers were at the centre of competition policy reforms in the electricity sector in the 1990s. Many commercial and industrial customers in particular exploited significant economies of scales from the creation of a National Electricity Market (NEM). Competition also delivered savings to residential customers.

Deregulation of retail markets began in 2008 in Victoria and has continued in NSW, South East Queensland and South Australia. Full retail contestability (FRC) was designed to accelerate innovation, improve service and choice and reduce the cost of delivering retail services over time. So has it delivered?

In the past decade competition has continued to expand in the retail electricity market (Vic, NSW, SA, SEQ). There are now more than 30 active electricity retailers in Australia. The total market share of the three tier 1 retailers has gradually eroded as smaller retailers have established their own customer base. The barriers to retail electricity remain low, with more small retailers opting to contract rather than own generation. There is ongoing speculation about the possible entry of service aggregators like Coles, Woolworths and Telstra. Clearly, the market is competitive, and increasingly so.

Electricity prices have increased since around 2008. The ACCC Retail Electricity Inquiry interim report1 suggests that this is the result of a range of factors unrelated to FRC: increased network costs, driven in some states by political intervention setting unnecessarily high reliability standards (gold plating), and to a lesser degree by the cost of renewable and other government green schemes (solar feed in tariffs, RET). More recent sharp increases have been the result of scarcity in the wholesale (generation) market following the closure of around 5000MW of capacity including the Northern and Hazelwood power stations and increased demand in Queensland (LNG). This scarcity is now being addressed through increased supply (new renewable generation) and improved output in NSW (access to coal). 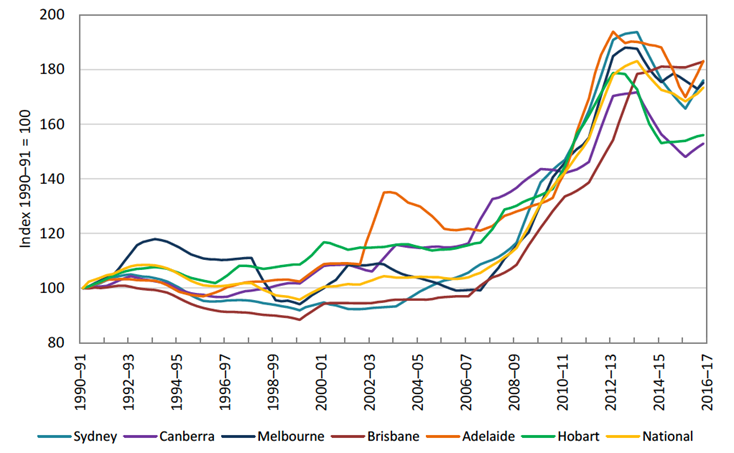 The cost of retail services is a relatively small part of this cost stack. The ACCC Retail Electricity Pricing Inquiry preliminary report2 found that retail and other costs were 9-19 per cent of the total bill stack. Retailer profit margins are between 5 and 9 per cent (not 15-20 per cent as has been suggested in the NSW Parliament). 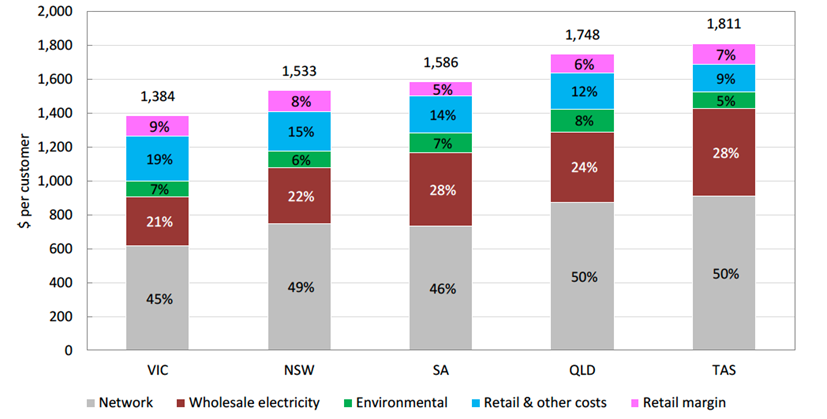 Electricity is one of the most fungible goods in a modern economy. Like money, its value does not vary from unit to unit. There is no premium electricity or economy electricity. For safety reasons, all electricity in Australia is delivered within the prescribed standards of 240 volts and 50 hertz. Closely related fungible goods like internet data (which can differentiate on download speed) are often bundled with other services (telephony) as a way of reducing complexity for customers and reducing bill volume.

In its Retail Electricity Inquiry Interim Report, the ACCC found that the signs of competition (switching, numbers of retailers) were positive, but that there were low levels of innovation by retailers. They expressed concern that some residential customers were still on standing offers. Techniques like door-to-door sales and telemarketing reflect the effort retailers go to access these customers and offer them better deals.

Electricity is an immature market, its oldest deregulated market is Victoria, which has been deregulated for less than a decade. It is easily the youngest of the deregulated, former government regulated/monopoly markets. This lack of maturity was highlighted by the recent AEMC Retail Competition Review3. It will take time to evolve, for the entry of new disruptors and new innovations. The question is not whether we continue, but how we accelerate this to deliver the best outcome for customers.

The ACCC interim report also highlighted that retailer costs were higher in more competitive markets like Victoria. This is the cost of increasing levels of customer churn in a highly competitive market. In more mature markets like banking, insurance and telephony, churn has been slowed by the benefits of other services (credit cards, ATM networks) and by increased discounts for bundled services. The challenge for electricity retailers is how they develop effective techniques to increase the stickiness of customers in competitive markets.

How does electricity innovate?

There are (at least) two pathways by which retail electricity markets are likely to innovate and mature to deliver increased benefits to customers in the 21st century market: technology services and simplicity. We see trends towards these innovations already in the market, although they are yet to benefit most consumers.

Generation will be increasingly intermittent and distributed. This will increase the value of demand flexibility, including storage. We should assume related disruption in the transport sector, from the increased electrification of cars. This presents further opportunities and challenges. Over time electric car batteries may be able to discharge into the grid.

Technology solutions will include the increased use of smart metering, distributed generation, distributed storage and active on-site demand management systems. Load can be shaved (or recharge expedited) to meet current conditions. Different households and businesses will have different load profiles and require unique and tailored solutions. Discovering these unique load profiles and providing the most efficient and effective solutions – whether they are distributed generation, storage or demand management – for each Australian household and business can only be discovered efficiently by an active, competitive retail market.

Technology innovation also supports improved simplicity for consumers If the costs of electricity are mostly fungible, then consumers should be able to confidently choose a retail offering that provides the best price and service to suit their household or business needs. Access to accurate quotes based on actual consumption patterns, and the availability of simple to understand offers, will go a long way to improving customer confidence in navigating the electricity market.

Simplicity will come through customers having the option of bundling energy services with others, like they bundle broadband with telephony, or insurances. Bundling services with kit – like an electric vehicle and charging station, for example – would provide customers with an experience already available in the mobile phone, telephony and data markets. Some customers may not have access to the technology innovations available because they are residential or commercial renters, or because of cost. They may prefer to access electricity bundling discounts by linking them with other services (supermarkets, petrol, telephony). Over time, some households may opt to aggregate a number of household services to a single provider. Customers should be able to discover savings by whatever means are at their disposal.

Electricity began its commercial life as a competitive, privately funded service. Governments assumed control of the service during the first half of the twentieth century, primarily with a focus on state development. This noble goal has been achieved. The return to electricity as a privatized, deregulated service should be seen as unremarkable.

Higher electricity prices impact customers, especially vulnerable and lower income households and marginal businesses. We know that the primary reason for price increases in recent years has been volatility in the wholesale market and historically high network charges –both are factors unrelated to competition in the retail market.

Whilst politicians grapple with the challenge of settling a federal climate and energy policy to stabilize the wholesale market, it is critical that interventions in the retail market are targeted and do not have the effect of undermining its ability to deliver in the best interests of consumers.