They say everything’s bigger in Texas. The scale of the power outages from which it is just emerging, which were triggered by a polar vortex, is illustrated by the magnitude of the load shedding that occurred on 15-16 February – “conservatively” estimated at 800GWh[i].

In relative terms, that is 105 times more than the level of unserved energy allowed for by the National Electricity Market’s (NEM) reliability standard and more than 350 times its “interim” reliability standard. These standards are generally considered less conservative than US standards, including those applied in Texas.

Customers impacted numbered about 4.5 million[ii] while neighbouring grids, such as the South Power Pool and Midcontinent ISO also experienced power cuts, and the impact was felt as far south as Mexico where nearly 5 million residents had their power cut as a result of gas flows south from Texas being affected.

In the immediate aftermath there has been plenty of finger pointing, with intermittent renewables[iii] being blamed, questions raised about Texas’s go-it-alone attitude and claims of poor preparations stemming from a deregulated energy market.[iv]. Immediate outcomes have been proposals for various inquiries, the filing of lawsuits[v], as well as the resignation of several members of ERCOT’s 15-member board. It will take time for a detailed assessment to emerge, but below we take a look at what we know so far.

Like the NEM, Texas has an energy-only market with the Electric Reliability Council of Texas (ERCOT) responsible for managing the operation of 90 per cent of the state’s electricity load, which is supplied to 26 million customers from 107GW of installed capacity. Unlike the NEM gas-fired generation is dominant (see figures 1 and 2).

The initial trigger for the rolling blackouts in the Lone Star state was the extreme cold weather – maximum temperatures in Dallas (which is roughly the same distance from the equator as Sydney) were -9⁰C on 15 February, 25⁰C below the monthly average.

The intense cold pushed demand to a new winter peak record of 69.2GW on 14 February – more than 3200MW higher than the previous record set in January 2018[vi]. Historically ERCOT’s power demand has peaked at around 55GW during February.

Peak demand in Texas usually occurs in summer, much like Australia, when demand reaches more than 70GW, as households reach for the air conditioning. But this winter the peaks have rivalled those levels, and market prices hit the ERCOT cap of US$9000/MWh (equivalent to more than A$11,000 - the current NEM market price cap is $15,000). A key factor in winter demand is use of electric heating in a majority of homes.

A major factor in the blackouts was gas supply constraints corresponding with the spike in demand, as well as a significant number of other problems.

Necessary maintenance on power stations is typically scheduled for lower demand periods, which, like the NEM, are non-summer demand periods.  As a result, in the lead up to the blackouts an estimated 14GW of gas-fired and coal generation was offline for maintenance[vii], consistent with previous years.

Those units remained out into Monday 15 February and the freezing conditions led to further outages at gas, coal and nuclear power plants with an additional 24GW unavailable. ERCOT reported 48.6 per cent of its generation capacity, or 52.2GW, was forced out at its peak (see figure 3). 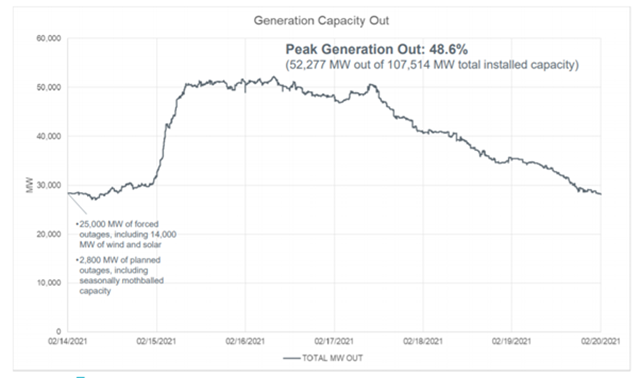 As demand rises gas-fired generation tends to meet additional demand[viii] but gas supply was impaired as a result of frozen gas wellheads and pipeline derating. Wood Mackenzie estimated that on 16 February about 18.7 billion cubic feet per day of gas production (about 20PJ per day) was lost because of freeze-offs – equivalent to about a fifth of total US output[ix]. At the same time, there was a large draw of gas for domestic heating. It meant there wasn’t enough supply for ERCOT’s gas generation fleet which (unlike Australia) has a low percentage of dual-fuel plants that can switch to distillate or fuel oil[x]. Only an estimated 31GW of gas generation was available out of a winter-rated capacity of 55GW[xi].

Wind output was impacted by weak wind speeds, while some wind turbines were affected by icing. Texas has around 31GW of wind capacity and an average output of 6GW in February.[xii] ERCOT reported 14GW of wind and solar was out on 14 February, while the wind output on 15 February averaged 3GW, according to the IEA.

Outages by generation type are shown in figure 4, while a timeline of events is shown below that. 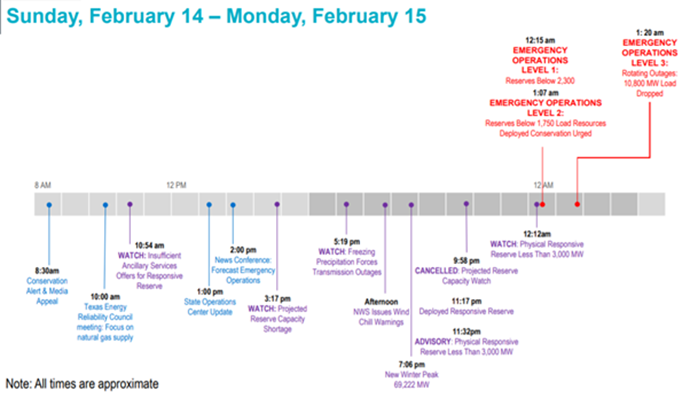 In its winter 2020-21 seasonal assessment of resource adequacy (SARA), ERCOT forecast peak demand of 57.7GW in normal conditions and assumed 8.5GW of thermal generation outage and around 7GW of wind capacity.

The SARA also included two extreme scenarios – one with normal demand but less than 2GW of wind, and the other an extreme season peak load of 67.2GW (based on the peak load in 2011 when severe cold weather impacted ERCOT - but 2GW less than the new record that was set this month), as well as “extreme generation outages” of 14GW (compared to the actual of more than 30GW reported last week). Wind production was also more than 1GW below the assessment forecast[xiii].

Another SARA assumption of potentially 838MW of imports turned out to be incorrect because of the cold weather impacting surrounding regions[xiv] as shown in the map below. 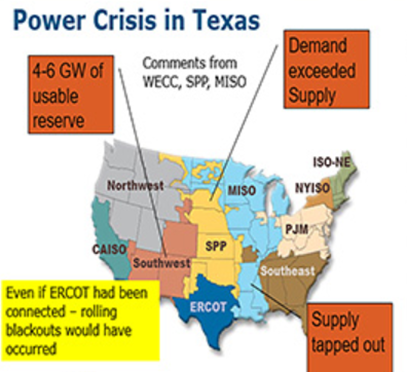 Given the actual scenario it faced, ERCOT issued an Energy Emergency Alert Level 3 (EEA3) - similar to the NEM’s Lack of Reserve 3 notice. The emergency alert was called with the grid “seconds or minutes” away from catastrophic and complete blackouts with an “indeterminate end date”, according to ERCOT[xv]. The EEA3 notice was only withdrawn on 19 February. The last time an EEA3 was issued was in the 2011 freeze. Figure 5 shows the available generation and estimated load.

In 2011 another severe cold weather event saw a total of 210 generating units experience either an outage, derating or failure to start between 1 February and 4 February, with the loss of generation triggering a controlled load shed of 4000MW on 2 February.

In total, approximately 1.3 million electric customers were out of service at the peak of the event on 2 February, and a total of 4.4 million were affected over the course of the event from 2-4 February. It led to an inquiry by the Federal Energy Regulatory Commission (FERC) and the North American Electric Reliability Corporation, with a series of recommendations around “winterisation/weatherisation” of plant and equipment at power stations and gas plants, including insulating pipes, and modifying procedures to increase reserves. They also recommended considering making critical preparations for winter similar to what occurs for summer months. The guidelines for generators were non-mandatory but as a result generators file weatherisation plans with the Public Utility Commission of Texas, with ERCOT undertaking spot checks[xvi].

Classical power system planning considers generator failures as independent events, so the chances of having a great number at once are infinitesimal. But it is often difficult to predict when common modes of failure will emerge. Widespread extreme weather is such a common mode risk, particularly to gas supply and wind turbines.

Clearly, the lessons of 2011 were not enough, and the question for Texas, as well as for the NEM, is how best to prepare and better plan for extreme weather events, particularly as the generation mix continues to change.  Extremes, like a polar vortex, are difficult to plan for, particularly when preparations for peak load periods are often guided by historical data. Extreme conditions not only hit supply, but also drove demand to record levels.

There is the real challenge of balancing reliability with the cost of supply. Greater use of standby liquid fuels for gas power stations seems an obvious and low-cost response. There are bound to be calls for greater interconnection, yet that seems unlikely to have helped as other states were also in trouble.

This event will surely reignite debates about capacity reserves and appropriate reliability standards, while also raising questions about the oversight of the market and system governance. It is hoped that this will be done calmly, after all the facts come to light, rather than leaping to an expensive knee-jerk reaction.

[iv] NY Times, How Texas’ Drive for Energy Independence Set It Up for Disaster