Taking stock of our energy resources

In terms of electricity generation it highlights the growth and development of both gas and renewable generation. Here we take a close look at these generation sources and the AERA data.

The AERA comments that there is potential for additional unconventional gas resources, including coal seam gas (CSG) shale gas and tight gas.

It expects CSG to remain the most important part of the unconventional gas industry in the near term.

Domestic consumption of gas has grown steadily during the decade to 2014-15 (see figure 1). 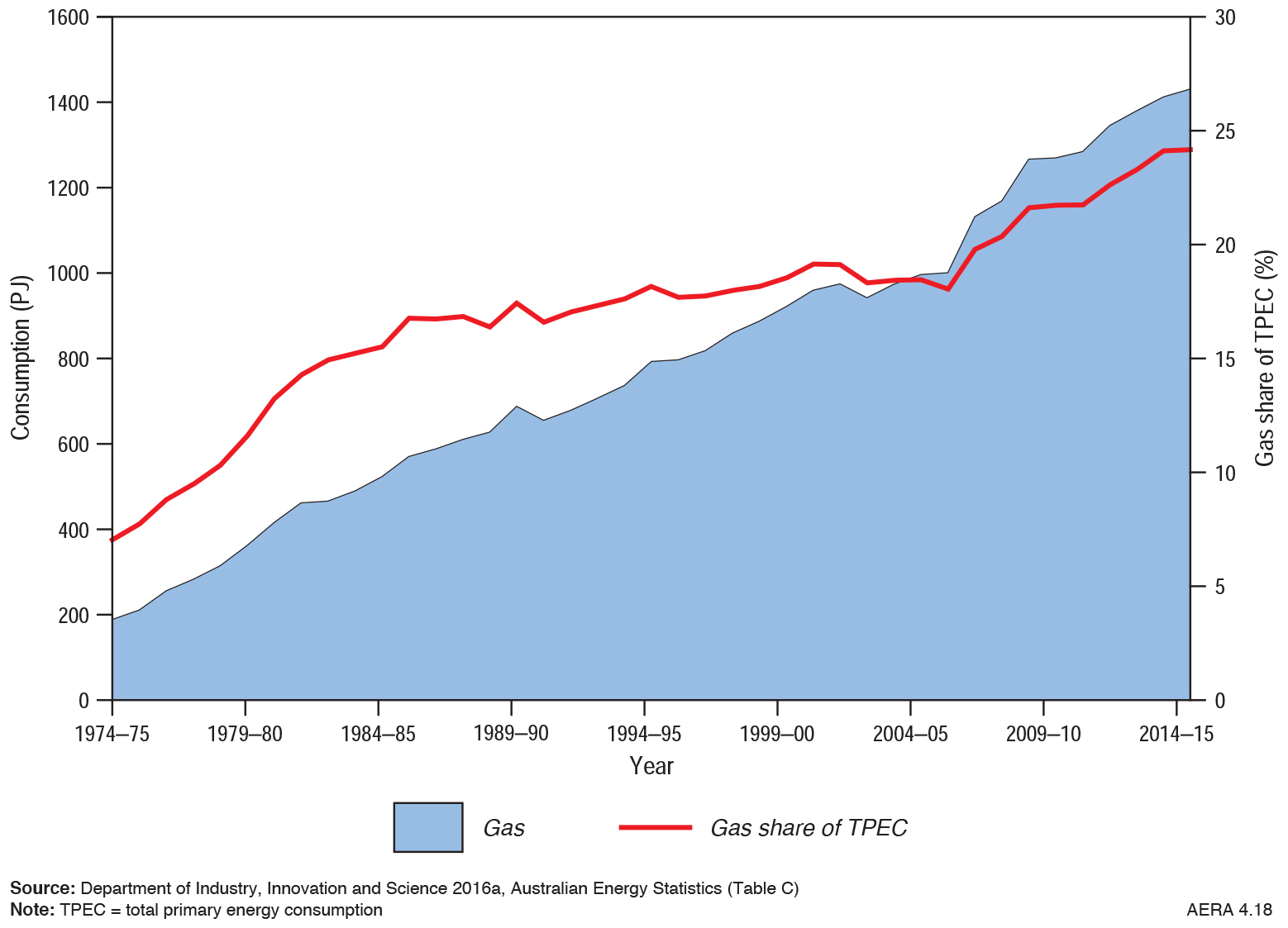 Gas-fired generation and manufacturing are the major consumers of gas (figure 2) accounting for around 70 per cent of consumption, with consumption for electricity generation showing a rapid increase since 2004-2005, increasing at an average of 7.9 per cent each year to 563PJ in 2014-15 (figure 3). 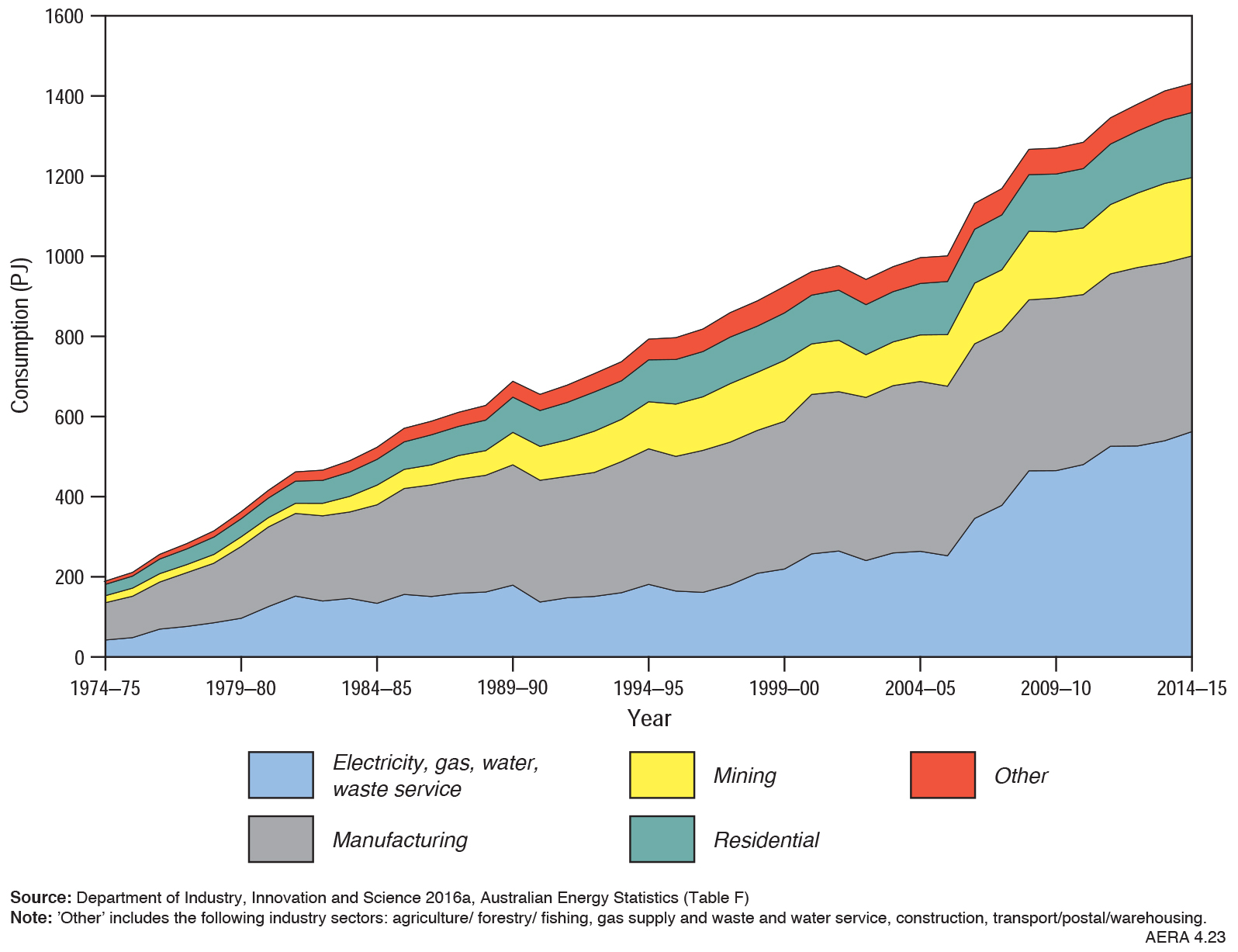 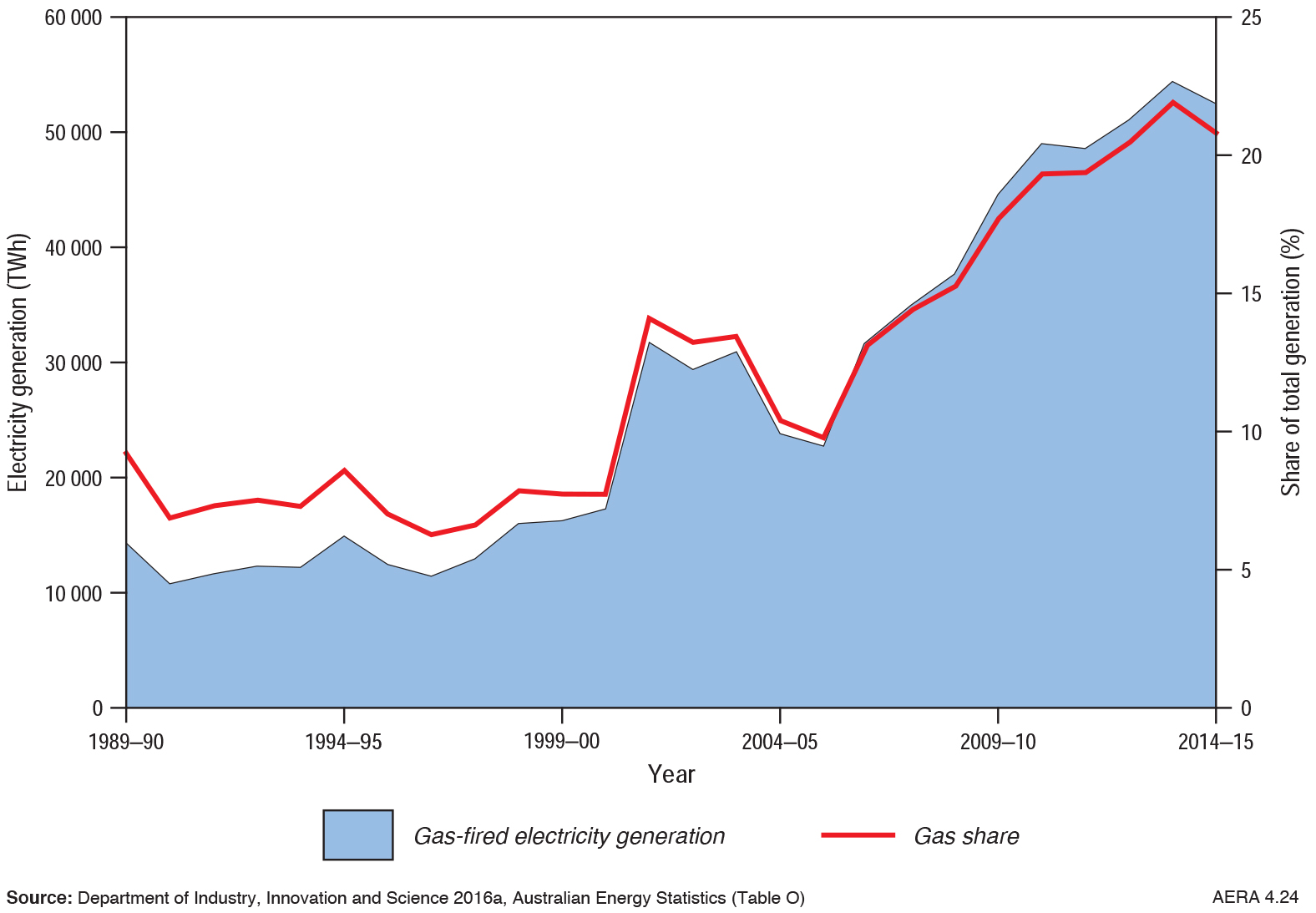 Figure 4 below shows the gas-fired generation by state and territory and its share of total generation in each jurisdiction. 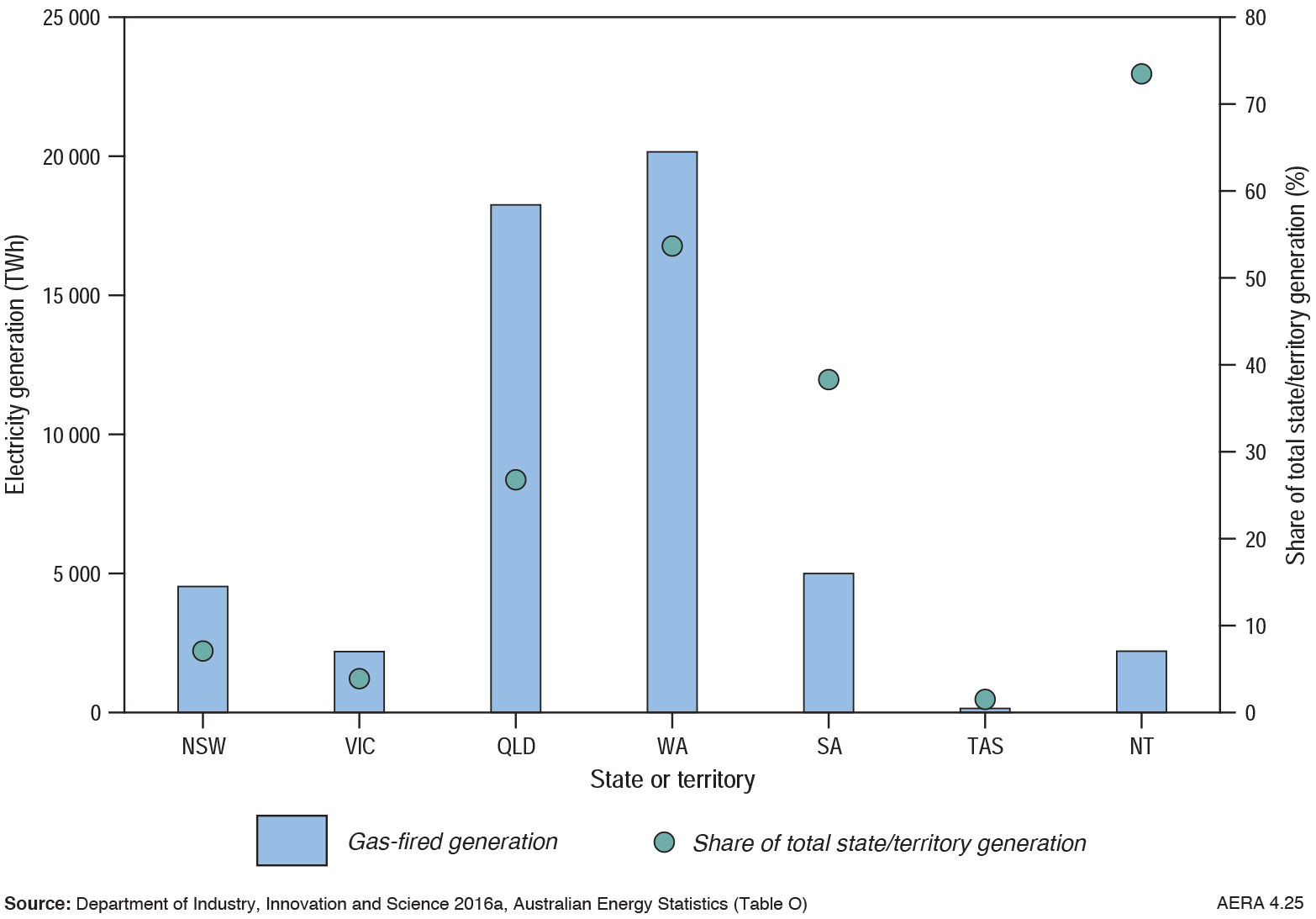 Gas is seen as a transition fuel to a low emissions future, the AERO notes that, but whether this eventuates will depend in the longer term on a range of factors, including policies to reduce emissions, the trend to higher end-use energy efficiencies and the cost of new technologies that compete with gas such as use of reverse-cycle air-conditioning in homes, which is competitive with gas heating, and solar hot water is a viable alternative to gas-fired units.

It notes that in generation, solar PV and wind are on a downward cost trajectory. On the flip side, and in favour of gas generation, is the fact that it is dispatchable and can stabilise the electricity system, while gas peaking plants offer a flexible backup to intermittent renewable generation.

The AERA projects that the development of renewables will continue to develop significantly up to 2020 driven by government policy, specifically the federal Renewable Energy Target, as well as the reduction in the cost of technologies.

“Advances in renewable energy generation and storage technologies and better mapping of resource potential will be important for continued uptake, and so will technologies and policies for grid integration,” the AERA says. 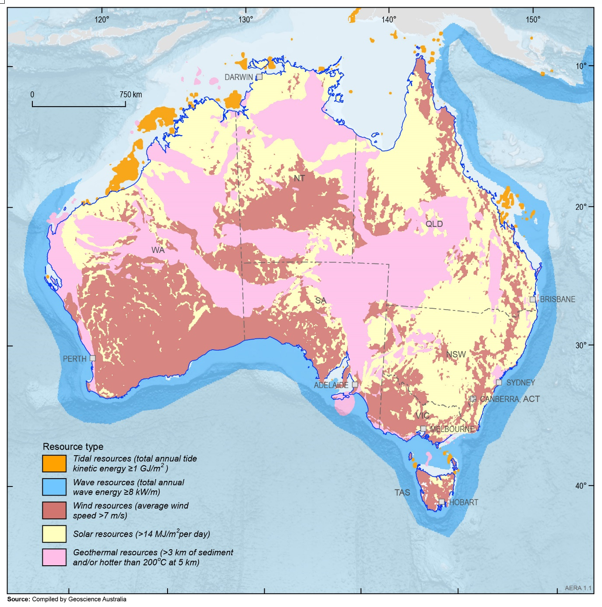 “The utilisation of renewable energy will continue to increase significantly to around 2020, reflecting government policies (e.g. the Renewable Energy Target) and falling installation costs. Advances in renewable energy generation and storage technologies and better mapping of resource potential will be important for continued uptake, and so will technologies and policies for grid integration.”

The AERA notes that Australia has some of the “world’s best wind resources along its south-western, southern and south-eastern margins, as well as along areas of the Great Dividing Range in eastern Australia and throughout Tasmania.

Areas with average wind speeds of 9m/s or greater are regarded as areas with high wind resources. Lesser resources may also be economic to exploit if they are more accessible and closer to the grid.

It notes that good offshore wind resource sites are located off the coasts of South Australia, Victoria and Tasmania but with ocean water depths increasing rapidly around our coastline this resource could be relatively high cost to develop. The exception, it notes, are areas offshore from Gippsland in Victoria where water depths are less than 50 metres at distances of around 3km offshore.

A significant proportion of Australia’s wind development has been in South Australia and Victoria because of their high wind resource potential and favourable policies, with SA having one of the highest penetrations of wind energy generation in any energy-only market (see figures 6 and 7 below). 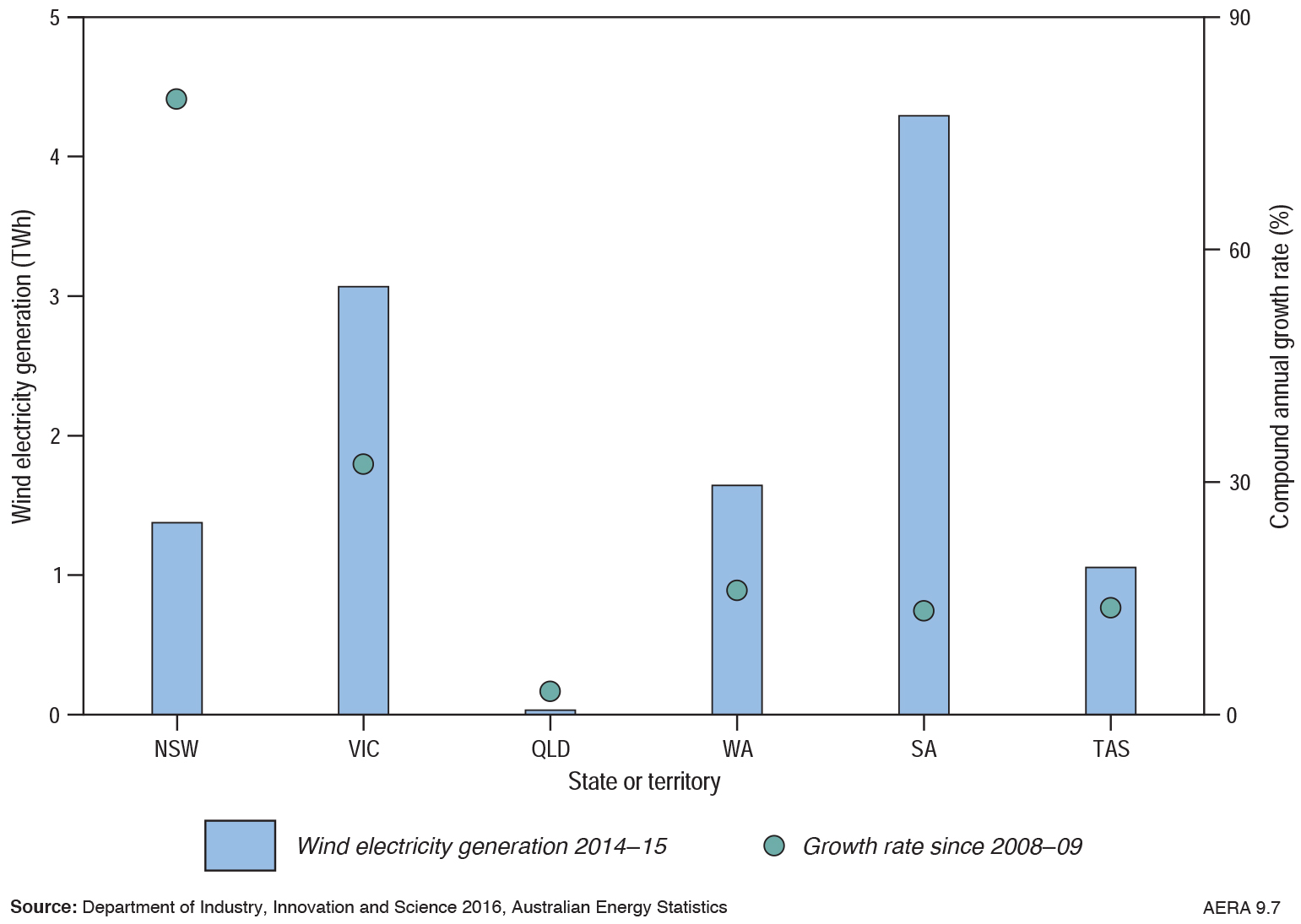 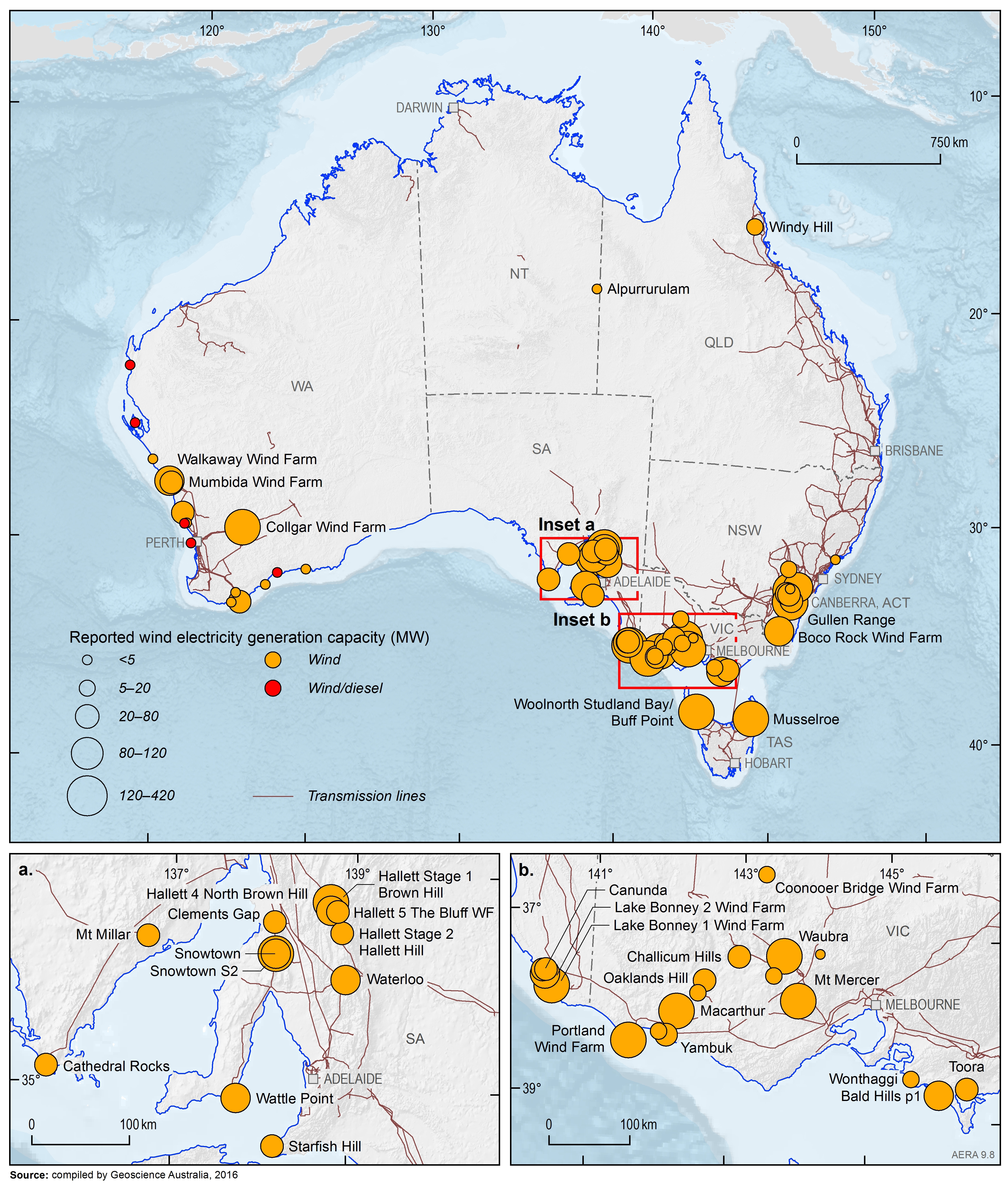 Australia’s primary wind energy consumption rose by 12 per cent from 2013-14 to 2014-15 to 41.3PJs. This was driven by support from state and territory-based renewable energy schemes and the national Renewable Energy Target – wind generation accounted for 0.7 per cent of primary energy consumption in 2014-15. The AERA notes that the use of wind energy is on a smaller scale than in other OECD countries, but that Australia has recently experienced faster growth than OECD countries (from a lower base).

The AERA reports that last year 664MW of new large scale wind capacity was commissioned and five new wind farms - involving 196 turbines and 380MW of capacity nationally - came online. It forecasts that as the most productive sites in SA are built out, investment will swing to other states and expansion to offshore resources could be considered.

The report notes that wind is set to play an increasingly important role in Australia’s energy mix and as the penetration of wind generation grows, managing transmission congestion, the variable nature of the resource and ensuring smooth integration into the grid will be the key challenges to its continued development.

“Theoretically, if only 0.1 per cent of the incoming energy could be converted into usable energy at an efficiency of 10 per cent, Australia’s energy needs could be supplied by solar energy,” it comments. It also argues that the energy falling on a 50km by 50km would be enough to meet all of Australia’s electricity needs[i].

Figure 8 shows the growth in solar PV generation and share of electricity generation since 1999, while the share of small-scale solar PV capacity by state and territory is highlighted by figure 9. 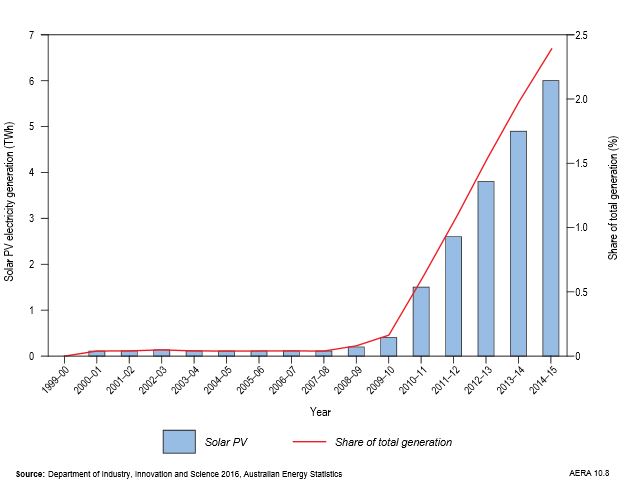 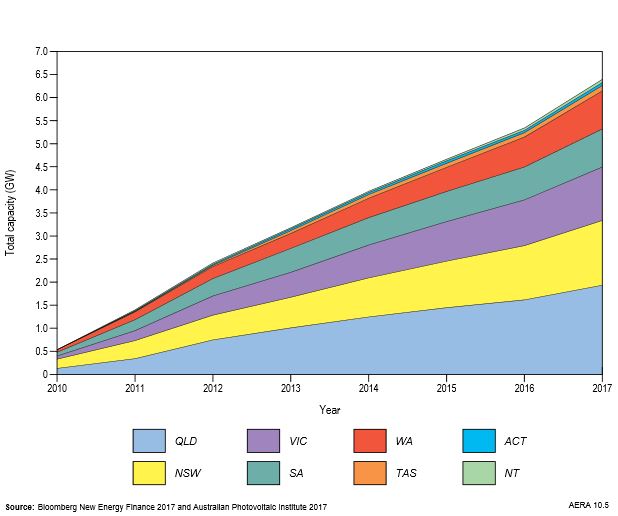 The AERA’s outlook for solar states is that “further development of the solar resource in Australia will be influenced by specific policies to create incentives, as well as infrastructure investment, and research, development and deployment (RD&D). Future retail electricity prices will also be an important factor for rooftop photovoltaic installation, particularly by businesses.”