Switching to decline with new approach?

New research by Morgan Stanley helps highlight some of the potential pitfalls of re-regulating electricity prices.

Morgan Stanley has taken a close look at churn rates in Victoria, South Australia, New South Wales and South-East Queensland, all markets with full retail contestability and de-regulated prices. Based on its most recent analysis it expects churn (the number of customers shopping around and moving from one retailer to another) to reduce this year.

Two factors they point to behind this are the introduction of a default market offer (DMO) from 1 July, which appears to be dampening incentives to discount, and continued growth of rooftop solar installations. There are now more than 2 million rooftop solar installations in Australia[i]. Many households may be installing the partial substitute instead of churning and with resulting lower bills are likely to continue to have diminishing propensity to churn, according to Morgan Stanley.

Its assessment also notes that current policy initiatives to reduce retail energy price dispersion and improve comparability, such as mandatory publishing of reference bills, will reduce discounting space for new entrant retailers – a point that has been flagged in submissions to the government’s proposals. This in turn will reduce the incentive for consumers to switch - “why bother comparing when the government is controlling the price?” The research acknowledges that consumers may eventually learn to take better advantage of better price transparency, especially if they take advantage of government comparator sites such as the Australian Energy Regulator’s Energy Made Easy, Victoria’s Energy Compare and Service NSW’s EnergySwitch.

The benefit of encouraging greater use of comparator websites is also highlighted by the research. Figure 1 below shows churn in Victoria. 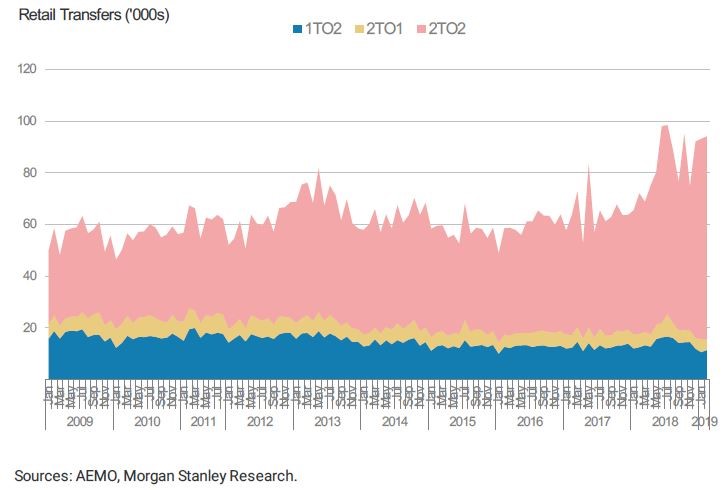 The recent spike in activity is likely to reflect the promotion of the Victorian Energy Compare website via the State Government’s $50 Power Saving Bonus, which was made available from 1 July 2018 and remains open until the end of June this year. The bonus requires consumers to make an electricity bill comparison online.

Overall customer churn in the four jurisdictions is elevated, but slightly below the peak (see figure 2). The Australian Energy Regulator (AER) in its State of the Energy Market 2018 report noted that small customer switching increased in 2017–18 in all regions for electricity (as well as for gas) and pointed to the correlation with higher prices and increased media scrutiny of power bills. 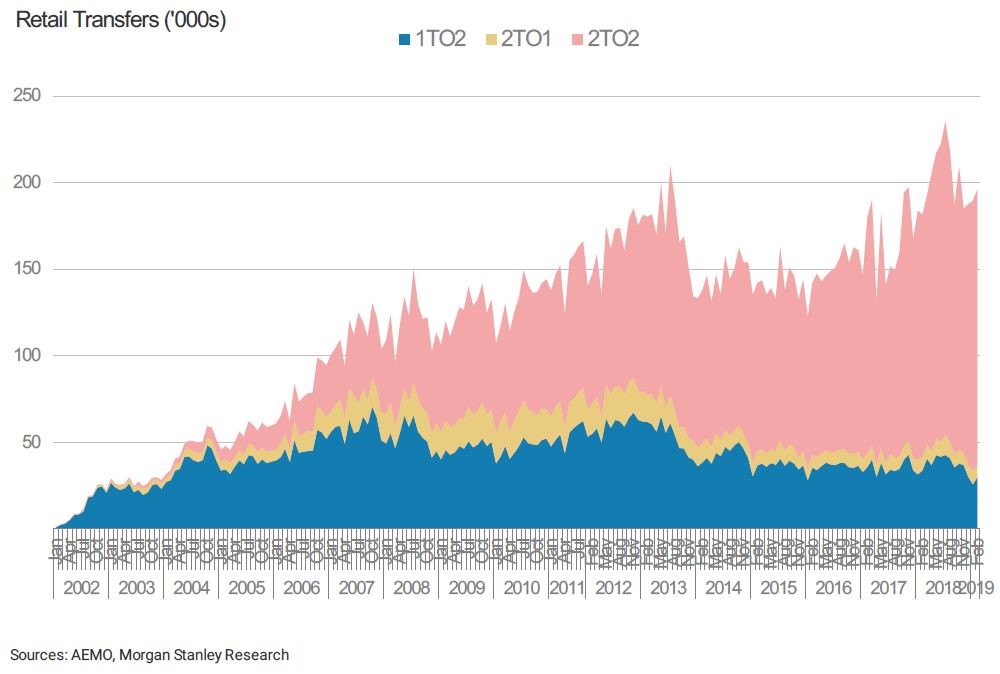 While the rate at which customers churn tends to indicate their level of engagement in the market, the AER does note that switching can also be low in a competitive market if retailers deliver good quality, low priced service that gives customers no reason to change, for example.

The major spike in South Australia, shown in figure 3 below, reflects the State Government’s tendering to get a better deal for those on concession payments. 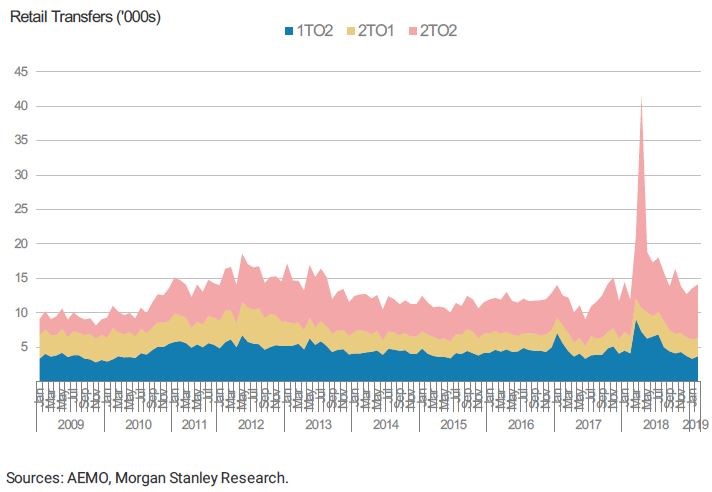 As a result, in December 2017, Origin successfully secured the tender whereby those who received concession payments were able to opt in to receive a discounted energy deal. This involved up to 168,000 low-income earners[ii].

The higher levels of churn shown in figure 4 for SEQ relative to earlier years correlates with increased customer activity following the introduction of full deregulation on 1 July 2016, although it has fallen back to historical levels. 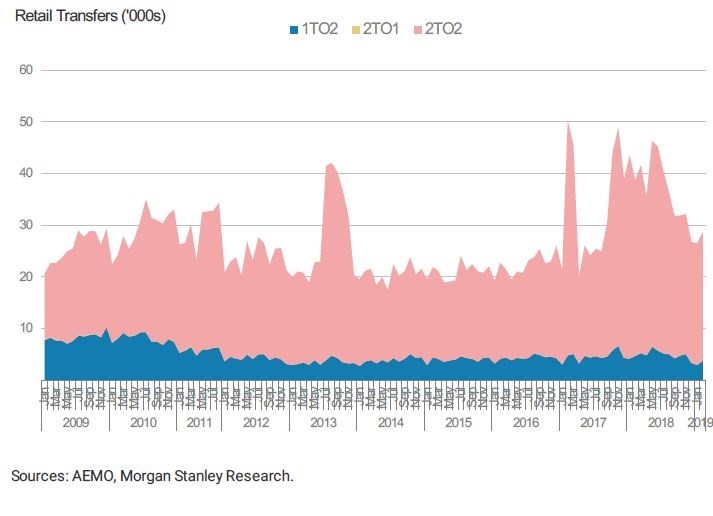 In its 2017 review of retail energy competition the Australian Energy Market Commission noted that consumers in SEQ were exercising their choices and there was an increase in the diversity of retailers and energy service providers entering the market, around 33 per cent of residential consumers actively investigated options in the previous 12 months while around 17 percent switched retailer.

The largest rise in consumer switching in 2017–18 was in SEQ following Alinta’s entry into the market, with 21 per cent of customers switching (compared with 14 per cent in 2016–17).

Churn was at its lowest level in 2014, and in its 2014 State of the Energy Market report the AER commented that energy retailers reduced their marketing effort in Queensland over this period, reflecting concerns about how regulated electricity prices were set.[iii]

The significant spike in churn in 2013 is likely linked to the OneBigSwitch campaign that began on 1 June that year. In August 2013 it was reported that more than 60,000 customers had signed up.[iv]  The AER also pointed to the rate picking up in 2013-14 aided by this campaign[v].

The Morgan Stanley analysis shows that switching in NSW rose over a number of years and reached its then-record rates in 2012−13 (see figure 5). 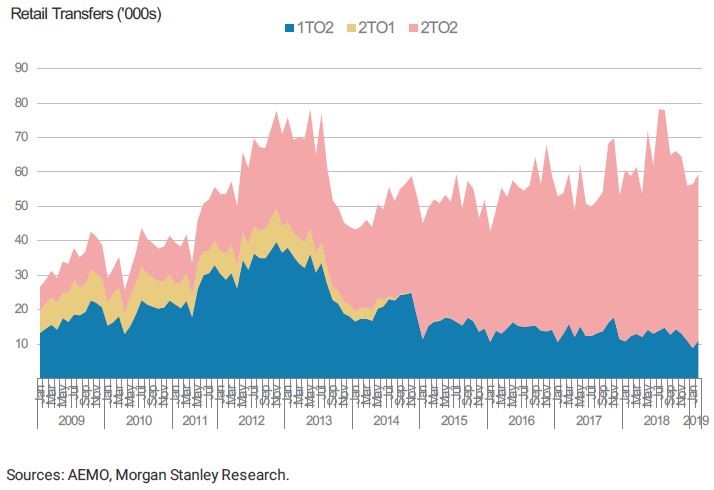 The level of activity is highlighted by the fact that more than half of consumers surveyed in September 2013 indicated that they had switched their electricity retailer or changed their electricity plan in the past two years (see figure 6). This was a rate that was higher than other consumer industries, such as banking, health insurance, and home insurance[vi]. 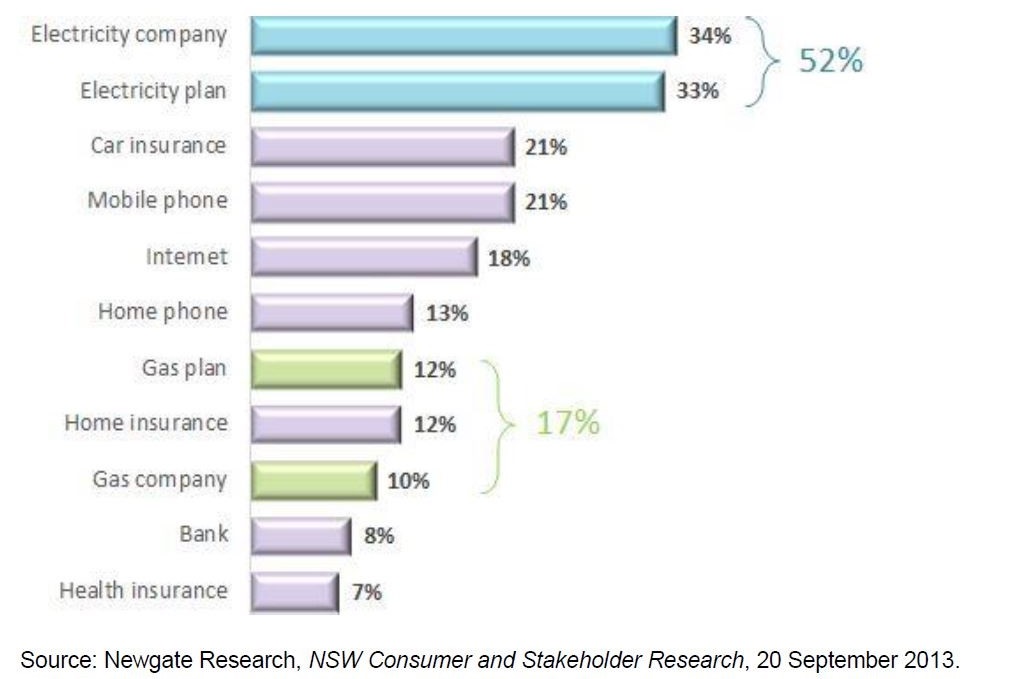 Subsequently, the AER noted that switching rates in NSW eased in 2013−14 and that this coincided with a number of retailers, including major retailers AGL, Origin and EnergyAustralia, stopping door-to-door marketing.  Churn increased again the following financial year, which correlated to the introduction of price deregulation from 1 July 2014 and it reached a new peak in 2018 (this is likely to have been driven by increasing prices and the heightened media coverage of the impact on bills).

[vi] Review of Competition in the Retail Electricity and Gas Markets in NSW, October 2013, AEMC