In the previous week, the COAG Energy Council agreed to establish two wholesale gas trading hubs, as well as arrangements for the trading of pipeline capacity, with the aim of reforming the gas market.  The Australian Energy Market Commission (AEMC) originally recommended new wholesale gas trading at two hubs – a Northern Hub at Wallumbilla in Queensland and a Southern Hub in Victoria, arguing that this would facilitate more efficient short-term gas trading and more access to pipeline transportation services along the east coast of Australia[i]. This framework would replace two existing gas markets.

1.   The Victorian Declared Wholesale Gas Market (DWGM), which incorporates much of the Victorian gas transmission system and has multiple entry/exit points.
2.   A voluntary trading hub at Wallumbilla, which has been in operation since March 2015.

The plan also involves simplification of the Short Term Trading Markets (STTMs) at Sydney, Brisbane, and Adelaide. The STTMs are primarily a balancing market in which gas market participants trade their daily unders and overs of gas.

In light of the changes being proposed, it is worth recapping what happened in the short-term trading market across existing hubs this winter. The AEMC just released the updated data for the STTM Price up to the end of July 2016. 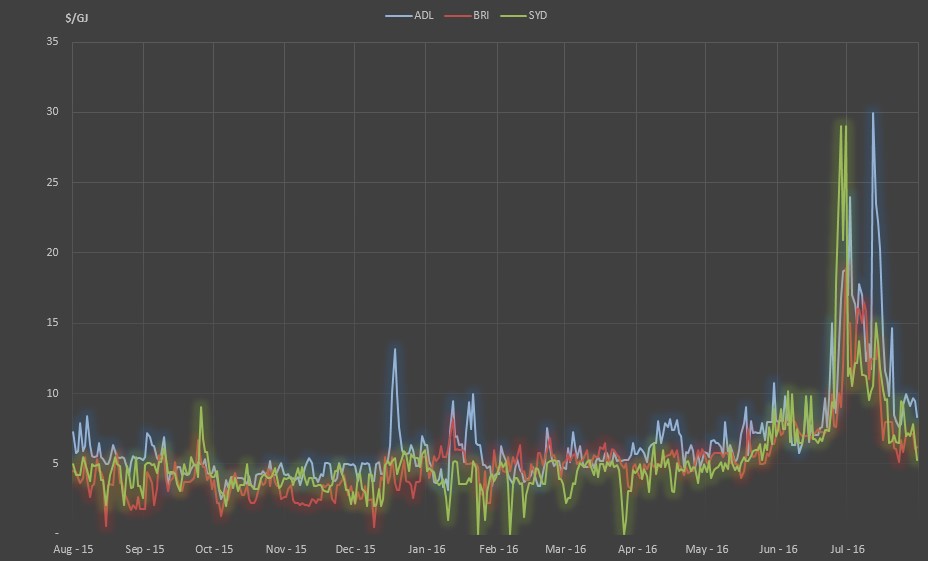 Figure 1 shows daily prices over a year at demand hubs in Sydney, Adelaide, and Brisbane. There were brief spikes in STTM prices across demand hubs during June and July 2016. The most expensive point during this period occurred in South Australia when the price reached $29.99 per gigajoule ($/GJ) on 12 July 2016.

Gas prices also increased substantially in the last week of June in NSW, when the price reached $29/GJ twice within the same week. In Brisbane, STTM gas price did not reach the highs of the other two hubs, peaking at $18.90/GJ. The average price fall in Sydney, Adelaide and Brisbane gas hubs has been $18.45, $18.18, and $8.78, respectively since the peaks were reached.

In Victoria, prices were also highly volatile in July 2016, where temperature dropped to some of the coldest levels seen in this winter, pushing the prices up significantly, as high as $43.55/GJ on 13 July (see Figure 2). The forecast demand was lower than expected, led to a short of 35 TJ to meet the required target across the day[ii]. When we exclude this highest price in July, imbalance gas prices in Victoria is still considerably high with an average of $11.70/GJ, compared to the average prices for the second quarter this year only accounts at $6.74/GJ. Following the highest price during the week, imbalance prices in Victoria reduced to around $10/GJ for the rest of the month. 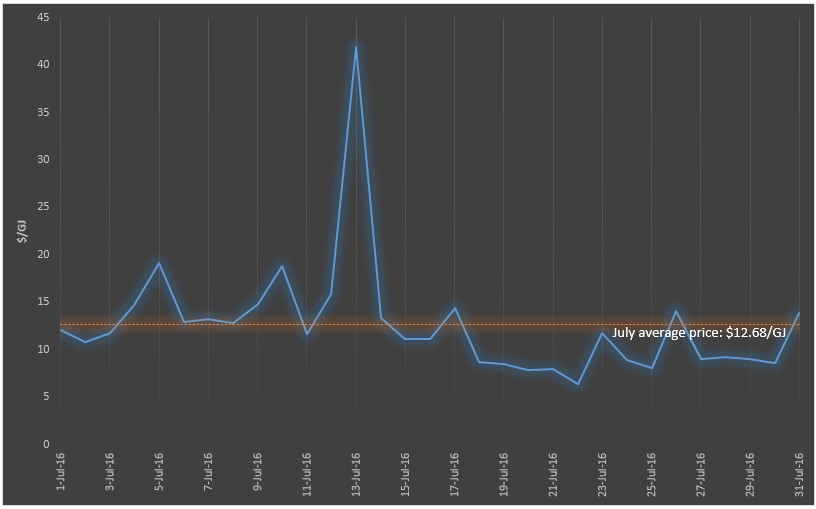 Note: Victoria gas prices exclude the cost of pipeline transport to the hub, so these are not directly comparable to the STTM price (which covers gas and transmission pipeline delivery cost to the hub).

The demand for gas for heating, industrial and commercial purposes tends to be considerably high during winter, particularly the demand for residential heating. Cold weather conditions in South Australia was one key factor for the state experiencing increased gas price volatility. The shaded region in figure 3 below shows the large number of days that the maximum and minimum temperatures for South Australia were below their long-term averages. This led to the higher gas demand as consumers turned on heaters. The average temperature for the peak week (10 -16 July 2016) in Adelaide was between 7.25  and 14.37 . Similarly, higher gas prices in Sydney and Brisbane also coincided with cold weather in those regions. 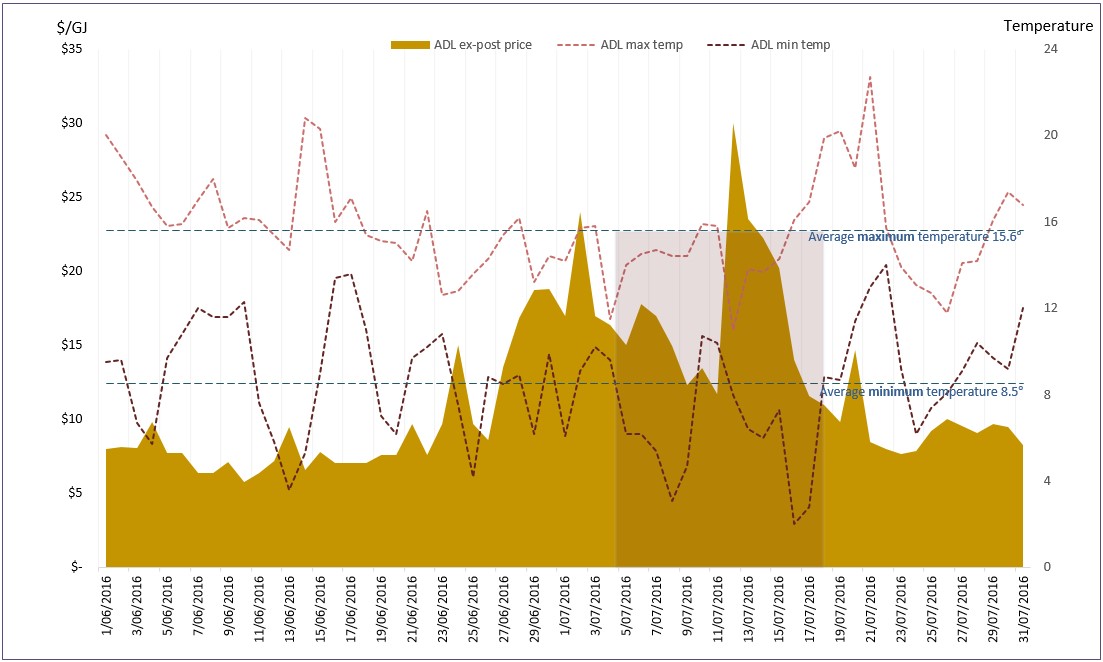 Along with consistently cold days, there is now also increasing demand from the newest LNG export facility, following the start-up of Gorgon LNG in March this year[iii]. Although the most affected is the QLD market rather than the Southern States, it is the case that part of the gas for LNG projects flows from South to North to QLD[iv].

The main reason for higher gas prices is tight local supply/demand balance. For example in South Australia a planned outage from 4 July to 14 July, and 16 July to 22 July 2016 on the Tailem Bend West 275 kV line, limited electricity flows into South Australia on the Heywood interconnector[v], while wind generation in South Australia reduced greatly, from 861 MW to 490 MW and this led to an increase in gas use for SA-based power generation. The resulting increased local gas demand resulted in a steep supply curve in South Australia.

How price spikes influence the cost of gas generation

Figure 4 emphasises the influential impact of increasing gas prices on the cost of gas-fired electricity generation. It costs gas generators between $30/MWh for most efficient generators to $63/MWh for the most inefficient to produce gas selling at $3.90/GJ. At a price of $9/GJ, the short run marginal costs rise to between $60/MWh and $150/MWh across different gas generators. It is expected that with doubling gas price ($18/GJ), the short run marginal cost would rise sharply and would cost up to $250/MWh for gas producers. 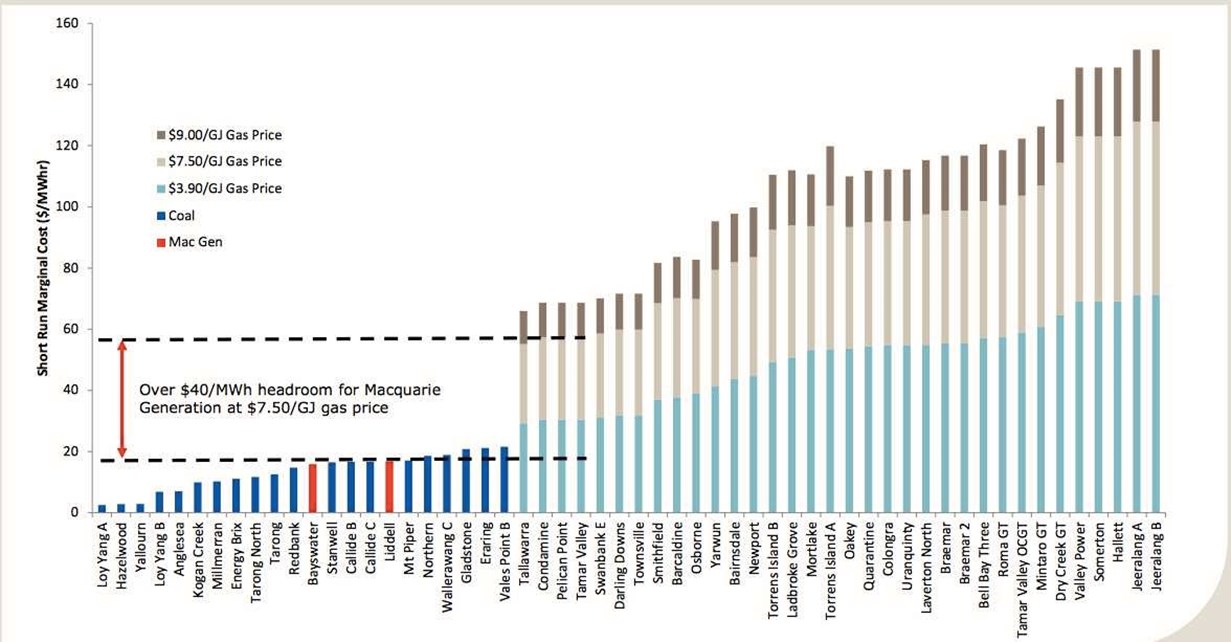 How does STTM Price affect Industrial and Residential Gas Prices?

At the wholesale level, gas is sold under long-term bilateral contracts between gas retailers and gas producers. Prices and quantity are allocated the day before trade and are published on the AEMO website under ex ante price and quantity. The ex post prices and quantity represent the actual figures on the day of trade, however as most of the gas is contracted, this is only the  marginal price of the overs and unders in the market, as the majority of gas changes hands under long-term contracts. It was estimated that these balancing volumes only represented 5 per cent of Sydney flows, 2 per cent of Brisbane flows and 6 per cent of Adelaide flows, according to EnergyQuest[vi]. When the short-term gas price is high (or volatile), retailers will extract additional revenue to offset incurred losses and purchase gas above the fixed price tariff they have sold it to their customers. Recently, new gas contracts have generally been sold for much shorter terms, and as a result major gas users are beginning to become more exposed to fluctuations in wholesale gas prices.

Ultimately, the retail market is part of the natural gas supply chain serving as the essential interface between the gas industry and customers. In the residential sector, wholesale gas prices generally account for around 10-15 per cent of the retail price of gas (12 per cent is the national average)[vii]. The other major components are retail and network costs. Thus, the wholesale gas price or STTM price has less impact on the residential market than it does for the large industrial sector. As small consumers enter into contracts with retailers at a flat rate, consumers pay the same rate regardless of the spot price the retailers paid. Over the long-term, though, a premium for increased price volatility will flow through to consumers.

Getting hydrogen on your own supply

Aug 20 2020
Read Analysis
GET IN TOUCH
Do you have a question or comment for AEC?