A new research paper has highlighted the benefits of vertical integration in the National Electricity Market (NEM) for energy businesses, new investment and competition.

In a paper[i] to Cambridge University’s Energy Policy Research Group (EPRG), Professor Paul Simshauser from Griffith University’s Business School, has analysed vertical integration by merchant energy businesses in the NEM to assesses what drives it and why it is important to the flow of new investment.

To do this the paper uses 15 years of NEM data for half-hourly spot prices, forward contract prices and yearly retail tariffs to simulate outcomes for a pure-play retail business, and a merchant generator, as well as for a merged business and then compares this to the sum of the individual parts. We take a look at the results below.

Vertical integration is considered a key means to manage energy-only market risk and based on market share, the vast majority of NEM retailers primarily manage risk this way[ii].

But, as noted in the EPRG paper, it has been “deeply unpopular” amongst regulators and policy makers in Australia and Great Britain and as a result has been a continual target and was part of the rationale for the prohibited conduct in the energy market laws (better known as the government’s “Big Stick”), which come into effect on 10 June.

Common concerns about vertical market power that are flagged include the perceived potential for withholding of capacity, as well as impacts on both forward market liquidity and on non-integrated retailers.

While vertical integration, the paper notes, is presumed to be anti-competitive, both theoretical and empirical evidence “overwhelmingly” conclude the opposite. The weight of empirical evidence points to material benefits for consumers.

Studies into vertical integration in petrol, beer, retail, cable TV and merchant electricity provide strong quantitative evidence that vertical arrangements reduced prices and increased output, or both. While studies in electricity markets had found that vertical integration had a moderating effect on wholesale prices in the US’s PJM Market and in New Zealand it was found to enhance wholesale market competition and lower retail prices[iii].

The paper also notes that in the NEM, while the “Big 3”[iv] have a combined market share of 63 per cent in retail and around 50 per cent of generation there is no evidence of “withholding” or declining forward liquidity. 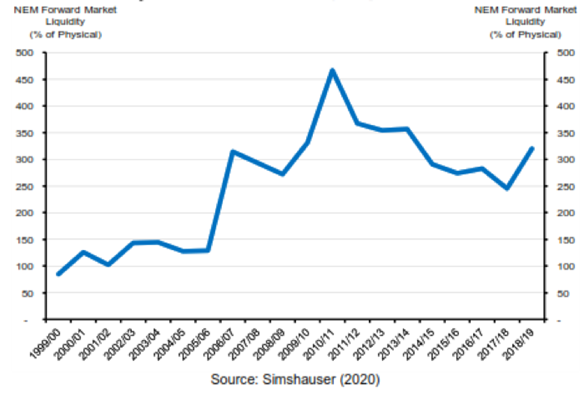 To assess the economics of integration the paper considered a peaking generator (2 x 180MW open cycle gas turbine, OCGT) and a retailer with 5300GWh of load and simulated this over a 15-year period using historic data from the Queensland market.

It notes that the 540MW peaking plant represents a small part of Queensland’s 14,500MW of capacity, while the retailer represents a 20 per cent share of residential and SMEs (mass market) customers.

The data included 30-minutes spot prices and customer load based on Australian Energy Market Operator (AEMO) data, traded derivatives prices (base and peak swaps, $300 caps) from the ASX and daily gas prices from AEMO; monthly average data from the capital markets from the RBA and annual customer switching rates, two-part tariffs for each segment and prevailing tariff discounts from AEMO and the Queensland Competition Authority (QCA).

The gas plant was given a 10-year fixed price gas supply agreement ($2.90/GJ) because this was typical for the mid-2000s. To allow for increased gas prices following the commissioning of LNG export plants and the increased linkage of local gas to export prices, the gas plant was deemed to operate from the day-ahead gas market from that period. You can see the shift in prices in Figure 2 below. 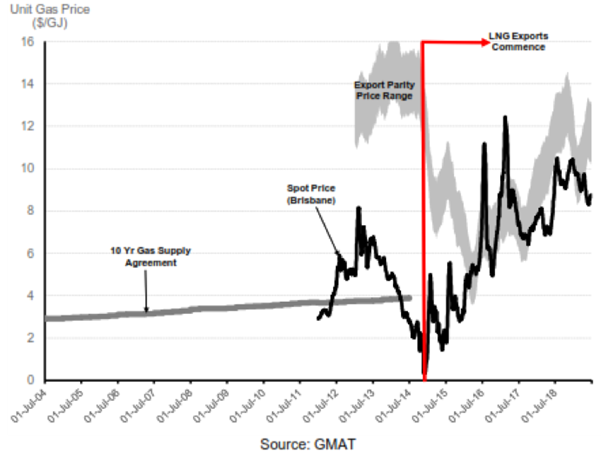 From the modelling and data revenues, costs and capital were produced for each of three businesses – generator, retailer and merged business.

In assessing the generator it was analysed as a project financed merchant OCGT plant and also as being corporate financed. 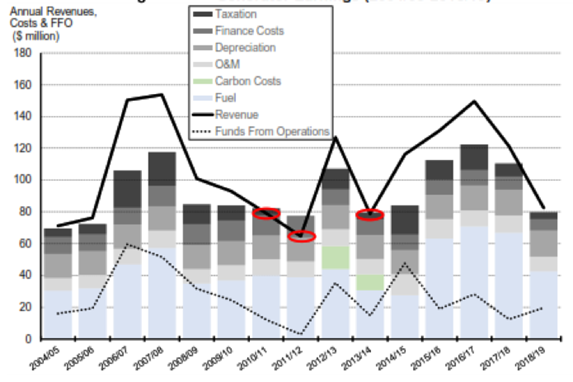 The results for the corporate financed generator is shown in figure 3 and as noted by the paper it shows annual revenues, costs and funds from operations (FFO) and three occasions of losses occurring (highlighted in red).

For the stand-alone retailer revenues are more stable than for the generator, but it has to contend with volatility in wholesale markets, while its FFO just remains positive over the 15-year timeframe. 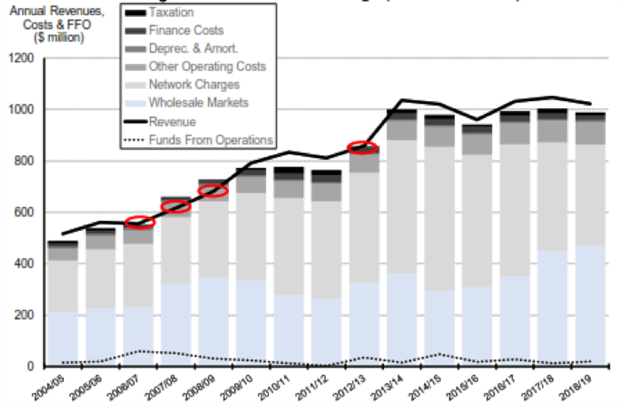 In contrast the merged business shows no losses or break even results. 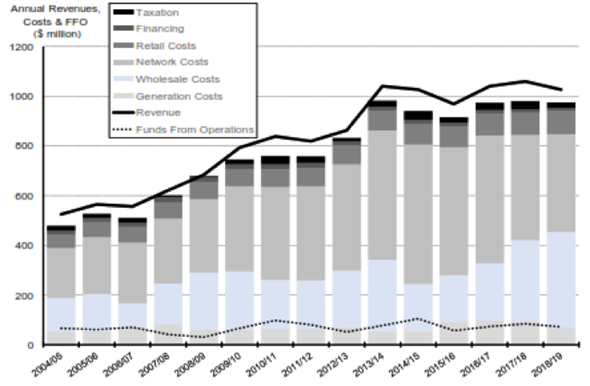 Significantly, neither the stand-alone generator nor the retailer are considered to have investment grade metrics[v], which are “of critical importance to the financial stability of firms and the power system more generally”. The generator has three points when it is considered investment grade, the retail business “displays junk quality” from year two onwards. In contrast the vertically integrated business produces consistent investment metrics (see Figures 6-8[vi]). 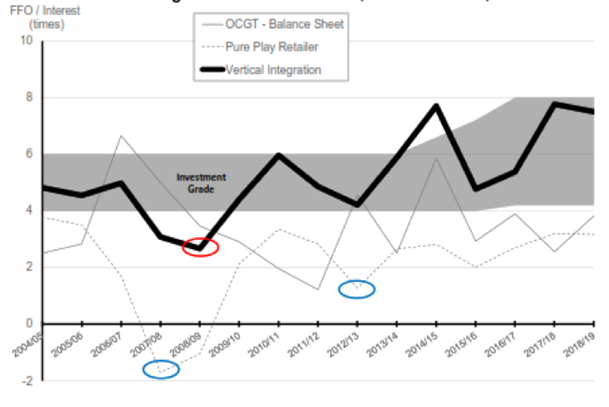 Note: During 2007/08 wholesale prices surged due to a ‘millennial drought’. Regulatory lag vis-à-vis regulated Retail Price Caps meant all retailers experienced difficult trading conditions in 2007/08. These same conditions were ideal for generators, and consequently a merger displays profoundly positive effects across the three metrics. The 2008/09 and 2012/13 results for retailers (see blue circles) reflected random and capricious regulated Price Cap determinations (2008/09 being the subject of a successful court challenge, and in 2012/13 a political intervention). 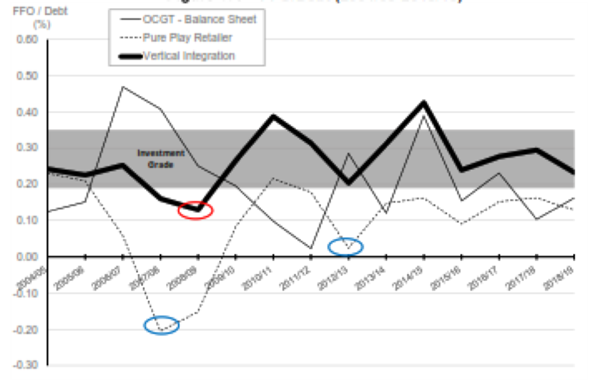 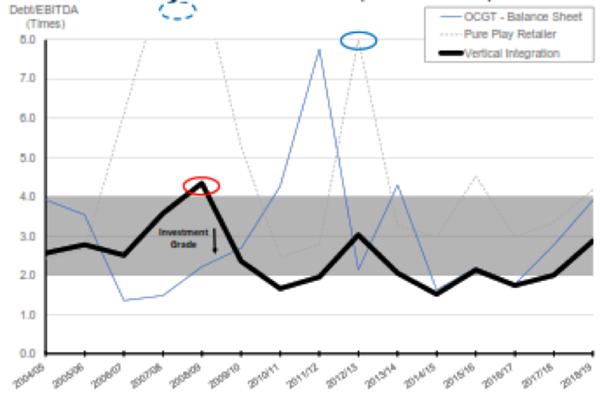 Overall, the paper finds that the costs of the vertically integrated business are 15-17 per cent lower than the sum-of-the-parts. Earnings are 35 per cent higher and the businesses credit quality improves by 26 per cent. Economics of vertically integrated business is greater than either of the stand-alone businesses and the economic returns are 25 per cent higher than the sum-of-the parts.

The generator’s 540MW covered around 64 per cent of the retailer’s peak demand and 23 per cent of energy demand over the 15-year trading period. It was also found to be profit maximising to sell any surplus generation into the spot and forward markets and that it would be unprofitable to withhold this capacity.

The paper concludes that vertical integration has provided the means by which to stabilise profits, navigate the ‘missing money’[vii], mitigate the worst effects of “capricious” regulatory interventions, maintain investment grade metrics and as a result is able to support investment in timely new plant capacity, “given the market for Project Financed merchant plant is largely closed.” That, of course, assumes the right policy and market settings are in place.

[i] Merchant utilities and boundaries of the firm: vertical integration in energy-only markets, May 2020

[iii] Merchant utilities and boundaries of the firm: vertical integration in energy-only markets, May 2020

[v] BBB- is considered the threshold for investment grade

[vii] Competitive wholesale electricity markets are often said to suffer from a “missing money” problem. This refers to the idea that for various reasons prices for energy in these markets may not fully reflect the value of investment in the resources needed to meet customers' expectations for reliable electric service