On 8 October the Leader of the Opposition, the Hon Anthony Albanese MP, made his reply to the Federal Budget.  In it the ALP proposed a $20 billion policy entitled “Rewiring the Nation”.  Is this a good idea?  We take a look.

In his Budget reply speech, Mr Albanese claimed that “Australia should be a renewable energy superpower”, but was held back by an outdated electricity transmission system, which doesn’t allow the renewables sector to deliver its full potential.

To counter this problem, the ALP proposes:

Besides the benefit of giving renewable generation unconstrained access to the transmission system, the ALP also identified the following benefits:

The ALP is rightly proud of its legacy in conceiving a nationalised National Broadband Network (NBN) under the Rudd Government, which is proving so useful today.  There are similar conceptual elements in this proposal, however the model’s applicability to electricity transmission is highly doubtful.  Most obviously, the NBN was an entirely new network, whereas here we are clearly not starting with a blank sheet of paper.

Appended to the ALP’s media release was a series of quotations attributable to the Labor Leader and Shadow Minister for Climate Change and Energy, the Hon Mark Butler MP.  They provide a starting point for discussing the implications of Labor’s proposal.

Future generation will take many guises.  Much of the original generation fleet was large scale, and established close to its fuel supply, e.g. the Latrobe Valley, with transmission lines built to connect it to load centres.  But this doesn’t hold true for all plant.  For example, the Torrens Island Power Station was built 15km from the Adelaide city centre, and the regional reference node is located there.

While it is acknowledged that there are significant plans for large-scale wind and solar farms to be built in rural areas to take advantage of abundant resources and cheap land, distributed energy resources are likely to be a significant future supply source, with 35,000MW of residential and commercial behind-the-meter generation (and 14,500MW of storage) predicted to be installed across Australia by 2050, under AEMO’s Electricity Statement of Opportunities Central Scenario.[i]  This is about half the current scheduled generation in the National Electricity Market (NEM) and WA’s Wholesale Electricity Market (WEM).  While remote generation requires transmission, local and behind-the-meter assets self-evidently don’t.  Thus some market developments lead us toward more transmission while others lead us to less, and we really don’t know yet which of these opposing drivers will be stronger in coming years. 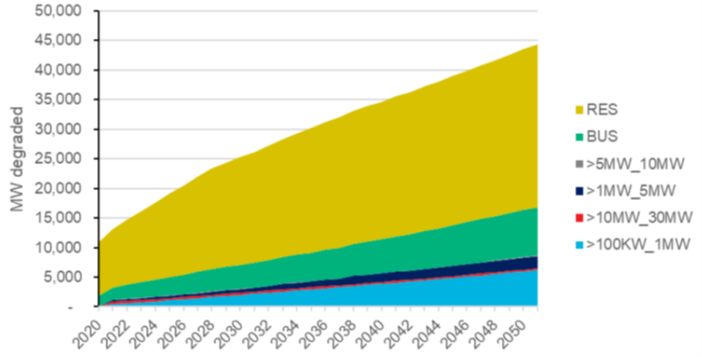 Thus transmission expansion is not technology neutral, since it favours large-scale plant in distant areas, and interconnection of jurisdictions which have significant import/export capabilities due to the presence of large plant.

“… and will allow the market to drive least cost, reliable new energy production”

The ALP proposition is that by removing constraints on the transmission system, there will be halcyon days of power being wheeled across the NEM, with the cheapest cost always winning the day, irrespective of whether that generation is remote from the load which it is scheduled to serve.

While at face value this may have merit, the difficulty arises when the delivered cost of energy is considered.  Megalithic transmission lines are not without their costs, whether this be via Transmission Network Service Providers’ (TNSPs’) regulated returns or government subsidies, and ultimately end-users pay for the largesse in crisscrossing the continent with transmission lines. Least cost delivered energy is not a given.

Reliability and security are also issues which can be supported via transmission, but just as effectively through other means.  The AEC has repeatedly supported the Reliability Panel as the best, most appropriate arbiter of the compromise between acceptable reliability/security and its cost.  There is a widespread government (of all ilks) misconception that you can never have too much reliability, and there is a hint that the ALP has sympathy for this view, and that transmission augmentation is how to get there.  However these come at a cost, and while reliability and security can be achieved through more transmission, they can also be achieved through local generation, demand response, battery storage, flywheels, synchronous condensers and the like.

In fact, a grid that is more heavily meshed is in some ways less secure, as faults propagate more broadly through “cascade failure”.  For example, this was the cause of the great 2003 US blackout.[iii].

That is not to suggest that the NEM should not have more transmission: just that it’s one of many means to our desired ends.  It should be chosen when and if the economics fall in its favour.  There is no truth to the slogan “no transition without transmission”.  For example, the recently published Western Australian Whole of System Plan is promoting a secure, reliable and low carbon vision for the South West grid with almost no new transmission.[iv]

“Australia’s electricity network was designed for a different century, and transmission systems themselves are operated by monopoly providers who keep taking households and businesses for a ride.”

While it is agreed that initially much of the network was designed and built in the 20th century, there have been significant expansions since then, including Basslink, the Heywood Interconnection Upgrade, Murraylink, and QNI.

To avoid duplication it is reasonable for monopoly providers to construct and operate these assets.  But the pitfalls of monopolies are well-recognised, and the Australian Energy Regulator (AER) is charged with the responsibility for ensuring that network service providers earn reasonable, but not disproportionate returns on their assets.  As the AER says in its Strategic Statement,[v]

“We drive the network businesses, through our ‘reset’ processes and ongoing oversight, to deliver good long-term outcomes for consumers in terms of price, quality, safety, reliability and security of supply.”

In contrast, it is unclear what scrutiny the Rewiring the Nation Corporation would receive, and there is no guarantee that its decisions would be any better than those of TNSPs.

Furthermore, in contrast with the NBN, which was a totally new network, augmentations will be part of the existing grid.  Creating a new agency will confuse roles and lead to sub-optimal planning, regulation and operation of that one grid.

“Australians don’t just pay for their power, but for the cost of building and operating the grid and then a hefty price on top.”

Again, the ALP is assuming that a government-owned corporation will operate more efficiently than private businesses subject to intense regulatory scrutiny.

History proves this wrong, with reports such as the Grattan Institute’s Cost Overruns in Transport Infrastructure[vi] observing that, “Australian governments spent $28 billion more on transport infrastructure over the past 15 years than they told taxpayers they would spend.  An analysis of all 836 projects valued at $20 million or more and planned or built since 2001 finds that cost blow outs account for nearly a quarter of the total budgets of these projects.”[vii]

The view also seems attracted by the lower cost of borrowing that a AAA rated government can access over private industry.  However this falsehood was debunked last century: as governments take on more debt that could have been taken by the private sector, government debt as a whole becomes lower rated.  Indeed the marginal cost of additional government borrowings equals or exceeds that which it replaces from the private sector.

In any case, the characteristics of regulated networks already gives them access to very cheap capital, and, under the drivers created by incentive regulation, for-profit networks can identify efficiencies that a not-for-profit government agency can’t.

“Only Labor will tackle this head on with a modern grid, more jobs, cheaper power prices and the reliable energy our country needs to power industry into the future.”

Labor asserts that more jobs will be created as a result of transmission infrastructure build.

While there is no denying that there will be construction jobs while transmission is designed and built, ongoing jobs are expected to be limited.  Quite likely there would be more jobs in the energy developments that transmission crowds out, such as building systems to harness demand-side response.

Much like politicians crowing about regional jobs when new renewable energy plant is announced, the reality is that these are short-term in nature, and ongoing jobs are limited.  In both cases, there are a very small number of jobs created, compared with the capital committed.

Take for example the latest Progress Report on the Victorian Renewable Energy Target,[viii] which says that for 2018-19, the $495 million in capital expenditure generated 945 jobs in construction and at least 23 ongoing jobs.

Australia is in the race leaders.  The most recent EY Renewable Energy Country Attractiveness Index ranks the top 40 countries in the world on the attractiveness of their renewable energy investment and deployment opportunities.[ix]  It shows that since the last report in 2018, Australia has moved to 4th, behind the US, China and France.

“As more renewable energy gets built, we need the transmission network to support it.  That’s why Rewiring the Nation is a no brainer.  It ensures Australia’s modern energy grid will be built by Australian workers using Australian steel at the lowest possible cost.”

The lowest possible cost will be achieved by the competitive market being allowed to tender for the necessary work.  The cost is unlikely to be affected by whether the tenderer is a TNSP or a government-owned corporation.

However specifying that the proposed transmission must be built by Australian workers using Australian steel limits the ability of tenderers to provide the most competitive price possible, is not realistic for a small market such as Australia to have multiple firms competing to provide specialist equipment, and ignores the need for transmission companies to optimise their supply chains (and improve their operational safety) by having standardised equipment.

In conclusion, it appears that while the ALP plan is well-meaning, its benefits are overstated.

Transmission can and will play a role in the transition to a reliable, secure and lower emissions grid, but is not the only way to achieve this outcome. The key should be to develop it where its benefits demonstrably exceed its costs. New interconnectors and opening up areas for renewable generation via new transmission need to be subject to detailed cost-benefit analysis to ensure our energy transition is made at the lowest cost. These are long-lived assets and the best means to achieve energy outcomes will shift, as various technologies develop further. The biennial nature of the ISP reflects this, containing, as it does, potential and changing scenarios. The cost and scale of transmission means we need to avoid stranded assets.

It does not seem either practical or the best use of public funds to bet on how the market will develop, so early in the race.