Lazard’s latest Levelized Cost of Energy (LCOE) Analysis shows that while the cost of renewable energy continues to fall, the rate of this decline is slowing. Technologies like onshore wind and utility-scale solar also remain competitive with the marginal cost of existing conventional generation technologies.

So what key trends are revealed in the firm’s annual assessment of different types of generation? We take a look at the report here…

The firm states that under “certain circumstances” resources like wind have remained cost-competitive with conventional generation (figure 1). 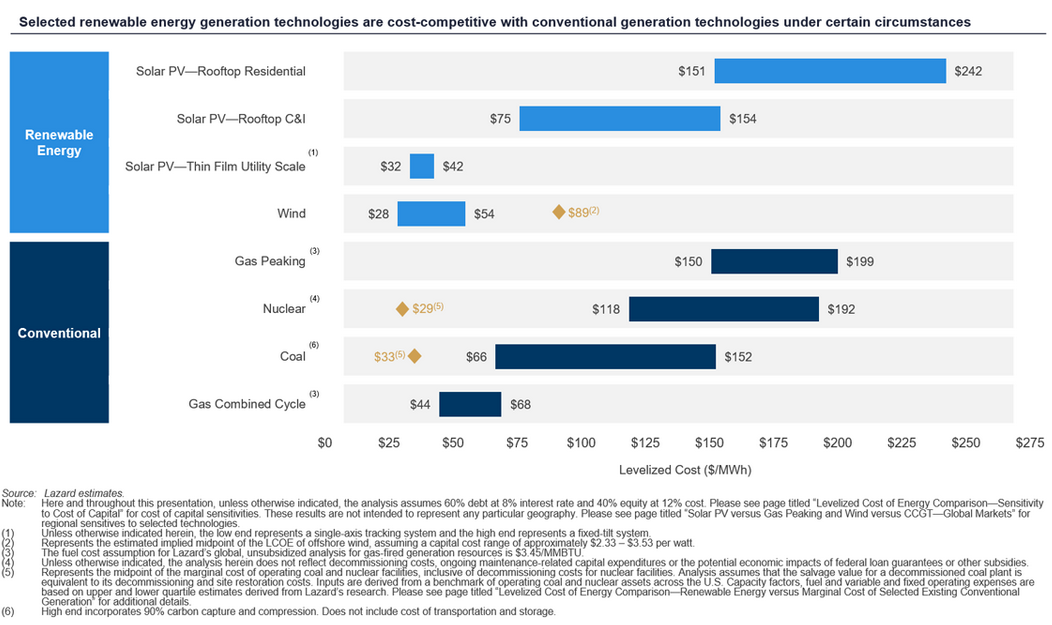 Utility-scale solar costs have been falling by around 13 per cent per year, according to the analysis, compared to onshore wind that has dropped by around 7 per cent annually over the past five years.

Lazard suggest that the drop in solar and wind is largely due to the falling price of system components along with improvements in efficiency, and as these industries continue to mature the rates of decline continue to progressively lessen. 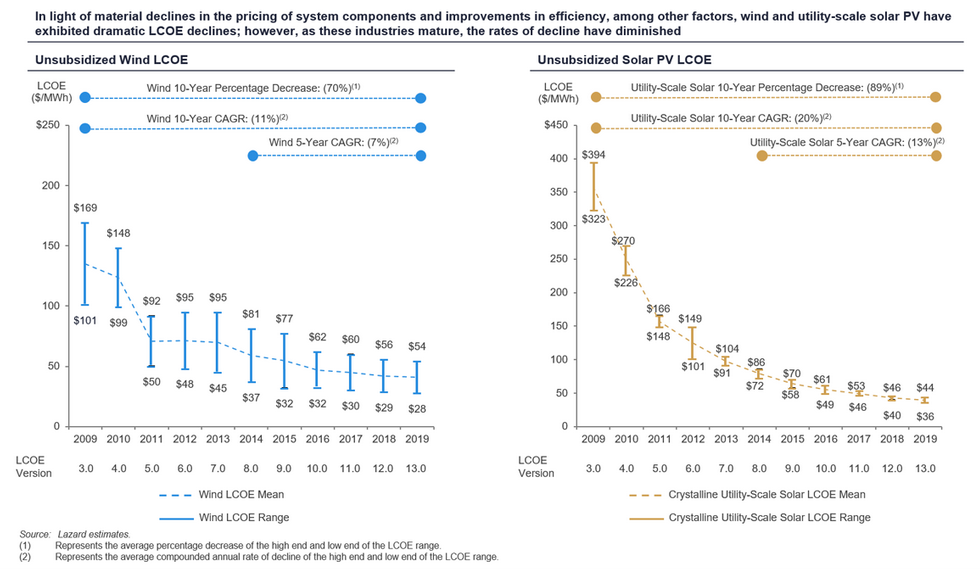 Earlier this year Forbes also touched on the reasons for the rapid drop in renewable energy costs, stating that improvements in wind turbine product design has resulted in higher capacity factors than a decade ago:

“Although the new designs are more expensive up front, increased capacity and capacity utilization have outpaced those higher costs to lower the cost of energy produced … A typical base-to-blade tip height for onshore turbines is now often over 500 feet – as tall as the Washington Monument,” Forbes states.

Improvements in manufacturing efficiency is another attributable factor that has lowered the costs of producing solar PV panels, largely in China which meets the majority of global PV module demand. According to Forbes:

“Per unit installation “soft” costs are declining as project developers gain more experience and installations have moved from small scale (rooftop solar) to utility-scale operations (solar farms of hundreds of acres) … Renewables that were once inarguably much more expensive and required large subsidies and mandates to incentivize adoption have slid into grid parity territory, now able to compete directly with conventional sources in many places.”

But to cost-effectively scale up renewables they must be located in places with an abundance of sun, wind and land – and Forbes points out that is typically in remote areas where more transmission infrastructure is required to connect supply and demand, which “may be having an effect on system costs”.

Lazard’s analysis also warns that differences in resource availability across regions, as well as fuel costs, can result in a “meaningful variance” in LCOE (figure 2). 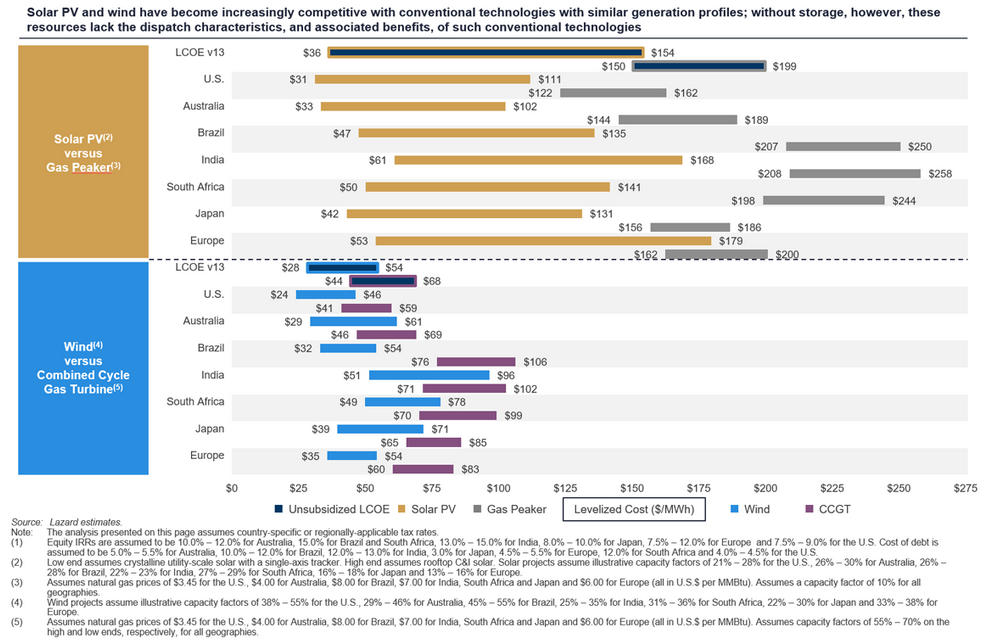 Lazard states that without storage, renewables lack the benefits of conventional technologies. The firm’s accompanying Levelized Cost of Storage Analysis shows that storage costs, mainly for lithium-ion technology, have continued to decline at a pace faster than that for other storage technologies. 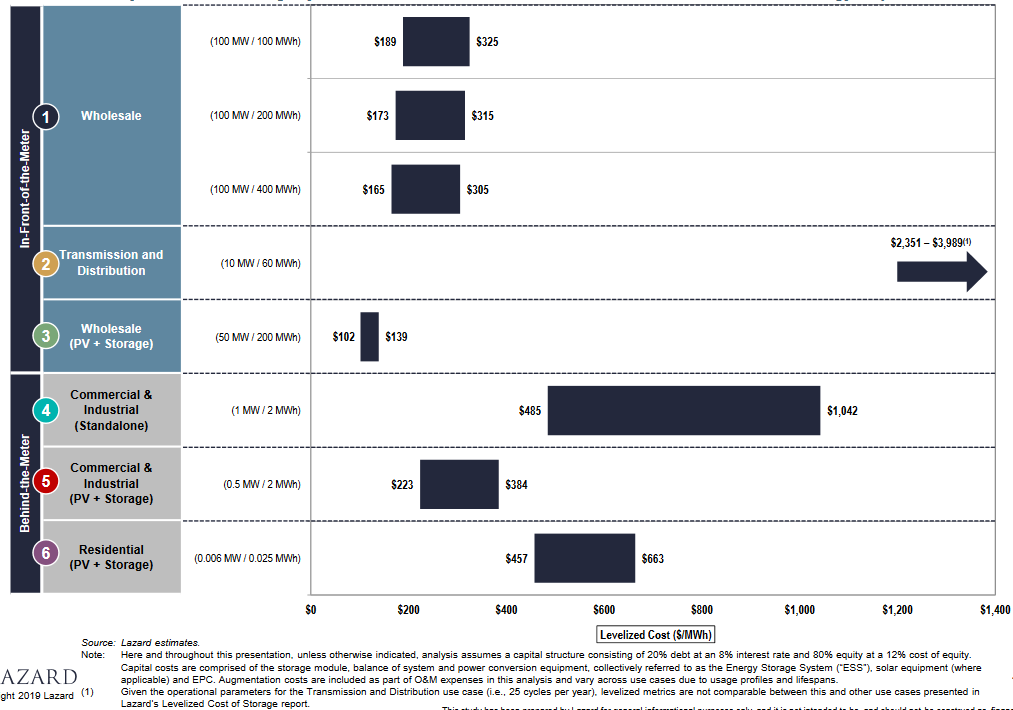 For shorter duration applications, lithium-ion remains the least expensive energy storage technology and continues to decrease in cost, again, Lazard states this is due to a maturing supply chain and increases in efficiencies:

[i] While based on US costs, Lazard’s assessment