The review was triggered by media reporting of a Schneider Electric briefing note in August this year, which claimed that in NSW “recent, aggressive generator bidding behaviour is unprecedented and opportunistic, as it does not appear to be underpinned by cost drivers alone.”  In September the Energy Minister asked the AER to investigate.

The AER’s advice acknowledged the “step change” in NSW wholesale electricity price.  It found that the increase had been driven by several factors including coal issues (supply and transport problems), higher gas prices, and fewer electricity imports of cheaper brown-coal generated electricity from Victoria following the closure of Hazelwood power station. It did not find “evidence to suggest that prices were being driven by behaviour we would traditionally associate with the exercise of market power in electricity markets, such as rebidding significant capacity at prices near the price cap close to dispatch”.

The review highlighted the following issues:

The AER also noted that another factor was the reduced availability of hydro generation in the lead up to summer, as Snowy Hydro conserved its finite fuel resource.

Figure 1: Generator capacity and output in NSW, by fuel source 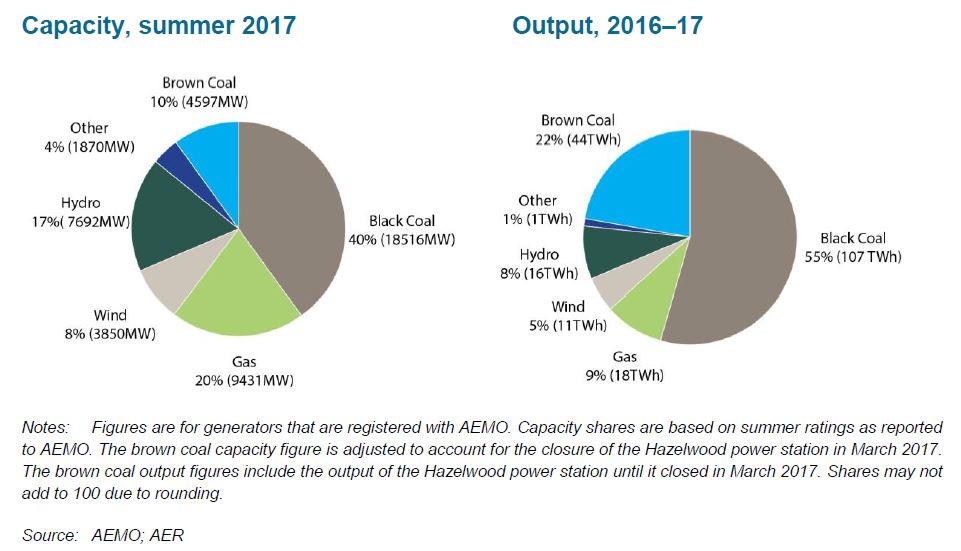 The AER observed that a market dominated by a small number of large generators is “likely to be less competitive than a market with more generators” and notes that NSW is dominated by a few large, vertically integrated participants.

With five major generators and renewables at around 4 per cent of capacity and output, as well as nine wind and solar generators outside the five major generators, NSW is the most competitive electricity market in Australia.  The Schneider Electric concerns around the lack of relationship between cost of production and how prices are reached misses the point of the National Electricity Market design.  Because electricity is a commodity that can’t be stored, the market discovers prices which reflect the demand-supply balance, not the cost of production.  For operational reasons, generators regularly bid well below operating cost, even in a higher priced market.  The AER review revealed that around 30 per cent of capacity in NSW is still offered at less than $0[ii].

No Evidence of Opportunistic Bidding

In considering market power the AER notes that there are certain types of opportunistic bidding commonly linked to use of that power which include physically withholding capacity and shifting capacity to extreme prices. But it notes that in the past year it has not identified instances where this has significantly impacted NSW average price outcomes. The AER said:

It also commented that assessing each participants offer behaviour “suggests that the changes were based on individual participants’ circumstances and did not involve co-ordinated behaviour”.

The review also notes that some of the issues that have contributed to high generator offers in NSW appear to be improving, notably concerns over coal supplies.

The report goes on to say that there is the need for more work to understand the impact of changes in the market.  “[T]here are a number of factors that need to be considered over a longer period to make an informed assessment of the effectiveness of competition in the NSW market” and “reach any definitive conclusions.”

The AER’s report is unremarkable in many regards because many of the factors impacting generators in NSW were widely known and reported on, such as the increasing pressure on coal prices and supply, the increased price of gas in the east coast market and the closure of Hazelwood, which had been a source of cheaper brown-coal generation to NSW.

Using its wholesale monitoring powers, the AER has investigated the supposed “opportunistic generator bidding behaviour” and concluded that there is no evidence to suggest this.  This should provide stakeholders with confidence that the NSW wholesale electricity market is functional and competitive.