Reforms to Reserve Capacity Mechanism: WA seeks to get the balance right

On 7 April, the West Australian Government announced reforms to its Reserve Capacity Mechanism (RCM), which are aimed at dealing with excess capacity of 1061 MW, or 23 per cent of the total capacity in the South West Interconnected System (SWIS) and reducing costs to consumers.  As with the National Electricity Market, the excess capacity is the result of falling demand driven by energy efficiency, declining industrial demand and the increased penetration of rooftop solar.

Ultimately, the reforms outlined in the Public Utilities Office final report, Reforms to the Reserve Capacity Mechanism, will lead to a capacity auction by 2021. In the interim, measures will be implemented to reduce costs to consumers, including lowering capacity payments to power stations and demand side management providers as well as announcing that the state-owned gentailer, Synergy, plans to reduce its plant generation capacity by 380 MW by 1 October 2018.

The WA Government expects the reforms to save $130 million each year and savings are expected to be passed on to consumers from 2017-18.

Full consumer benefits are expected to be achieved from the reforms post 2020 when Full Retail Contestability (FRC) is implemented. A timeline of events which have led to the reform and expected outcomes can be found at the conclusion of the article.

Balancing a reduction in consumer bills and ensuring future investment in electricity generation is an extremely challenging task. The implementation of policy which leads to controlled and stable exit of surplus capacity is difficult to achieve. The WA Government’s reforms are aimed at achieving a bill reduction for consumers from 2017-18 onward, whilst ensuring generators do not incur significant decreases in revenue. The main tool to achieve this is the introduction of a downward sloping capacity payment curve so that there is a price signal when available capacity exceeds requirements. The slope gets steeper (i.e. payments will be lower for a given level of excess capacity), moving from -3.75 in 2017-18 to -7 in 2023-24. Table 1 shows the slope for the transition administered price curve, which is a revision from the proposed slope of -5 in the draft decision.

The increasing downward slope of the capacity payment would indicate a decreasing price paid to participants in the capacity market over the outlook period, however this decrease will be offset by the exit of 380 MW of Synergy’s generation capacity, where if all else stays equal, the price paid to participants in the transitional RCM will rise on the price curve.

Demand Side Management (DSM) has previously been included in the RCM and paid the same price as generators. The interim arrangements will remove DSM from the RCM and providers will be paid a separate capacity payment price. After the capacity auction is triggered (the trigger mechanism is outlined further below), DSM providers will be required to meet standards outlined in Table 2 to participate in the auction. Table 2 shows the proposed reforms to DSM availability. The proposed reforms ensure both DSM and generation facilities are providing a consistent service that offers the same benefits to the electricity market and therefore are able to bid in the same auction. 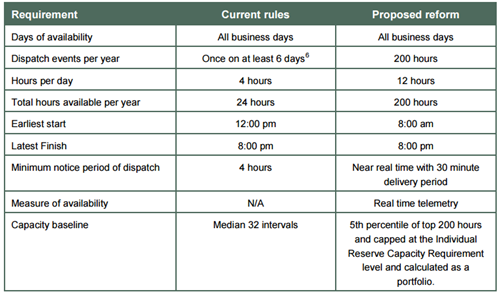 The Electricity Market Review expects the above changes to reduce the volume demand side providers initially by 220 MW due to their inability to meeting the proposed requirements. A further 90 MW is expected to exit the market due to commercial decisions.

In 2016, a detailed auction design will be developed by the Electricity Market Review. The timing of the first auction will be at the first of two triggers, either:

The following high level design will be implemented in the auction:

A video representation of the timeline of events that led to the reform and expected benefits is available on a website dedicated to educating the general public about the reform is available here. The video outlines why the RCM was introduced and the factors which have led to both the introduction and the current oversupply of capacity. Key points of the video are:

2004: Widespread blackouts, 1 million people have restricted or no power supply.

2006: Unprecedented economic growth leads to the need for more capacity as Western Australia becomes the fastest growing state in Australia. New apartments and suburbs continue to pop up as people continue to migrate to the state. The Reserve Capacity Mechanism is introduced to ensure a reliable supply of electricity for the continued economic growth and increasing population.

2008: The Varanus Island gas explosion shut down 33 per cent of Western Australia’s gas supply. Households were asked to conserve their energy usage, highlighting the urgent need for increased diversity in the generation mix.

2010: Solar panels are introduced and due to a mix of generous government incentives the penetration rate of these has now reached 20 per cent.

2014: Energy usage continues to decline following reduced commercial and industrial usage after the Global Financial Crisis. Increased penetration of residential and commercial PV and increased energy efficiency measure have led to a surplus of capacity.

2020: Full benefits of reform are now in place and customers are now subject to FRC where they are able to choose a retailer of their choice and shop around for the best available market offer.