As the energy industry (and its customers) await with bated breath the release of Alan Finkel’s report into the security of the National Electricity Market (NEM), the debate continues about how the power system should be operated and participants incentivised to contribute to its secure and efficient functioning. There are two key approaches. One is to use markets, decentralised decision making and the incentive impact of prices to achieve goals. The other is to use regulation and mandatory requirements. Two papers submitted to the Finkel review and other recent reviews illustrate these different approaches.

A package of improvements for the NEM auction

CS Energy commissioned consultants Intelligent Energy Systems (IES) to write a report that “documents a credible and coherent package of NEM auction reforms that implements marginal pricing principles and allows more autonomous operation by participants[i]”. This approach is both holistic, in that it seeks to address a range of perceived issues with the current arrangements and market-driven.

IES identified a number of ways in which the current NEM dispatch process fails to deliver marginal pricing, including:

Their proposed solution keeps the existing 30 minute settlement process and introduces a new “ramping ancillary service” (RAS) that is settled as the difference between 5 minute prices and volumes and prices and half-hourly prices and volumes. The service can be settled on Supervisory control and data acquisition (SCADA) data for the time being. Compared to the proposed five minute settlement rule change, this confines any errors arising from a mismatch between SCADA and metered data to the (RAS) element, which should be a small part of overall settlement revenue. This is illustrated in figure 1 below. 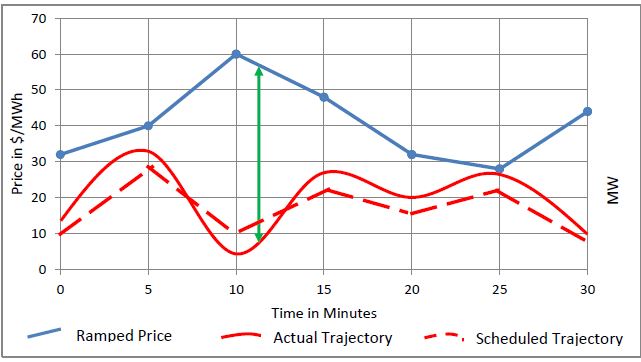 The benefit of the ramped price approach is an incentive on market participants to respond to prices at a range of times and extents rather than to focus on dispatch interval boundaries.

IES note that whatever the dispatch and settlement period, there are boundary issues crated by the stepped changes between periods. So they propose that the differential calculation be carried out over a series of short intervals (e.g. 4 seconds for existing SCADA facilities to create a moreorless “real-time” pricing outcome. In conjunction with a frequency control strategy based on the recent history of frequency and time error (that should be very similar or identical to the control strategy currently used by AEMO for regulation FCAS) this “real time pricing” can also contribute to system stability and frequency control. The real-time pricing approach is shown below. 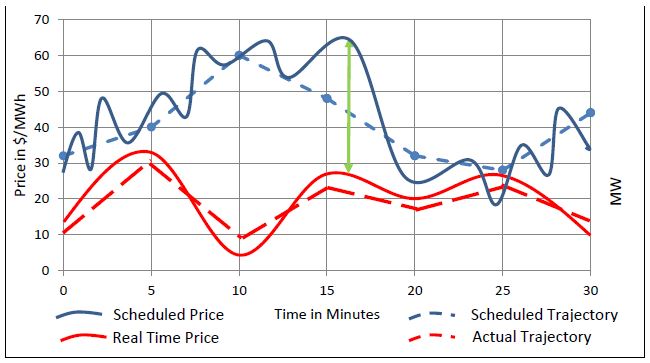 The principle is that valuing system frequency and time errors in real time will encourage participants to control frequency when it is cost effective for them to do so, and not otherwise. IES carried out some modelling of how this could work to correct frequency for significant disturbances. They found that in their illustrative system, a 600MW loss of generation could be corrected for over a short period, with only a brief price spike. In a potential second stage, the NEM could use upgraded programmable metering and communication infrastructure to decentralise frequency control. Markets for fast frequency services and inertia could be created in this stage, supporting the business case for technology such as batteries.

Potential benefits of this reform package include:

The existing core system used for dispatch and settlement remains. This should entail lower transition costs than the proposed 5 minute settlement rule change. It should also entail less disruption to the contract market, which is one of the major risks of transitioning to five minute settlement. This implies that generators and load can find appropriate risk management tools for their exposure to the costs of the RAS service, but it’s not clear that this service carries materially more risk than existing ancillary services.

The real time pricing mechanism is the discipline on generators to meet their scheduling targets. As such the compliance with dispatch instructions obligation becomes effectively redundant. See below for an explanation of one of the unforeseen consequences of this obligation and the way it is currently enforced.

IES also posit that the dispatch engine would benefit from further upgrading to become a non-linear solver, which would allow for enhancements such as dynamic marginal loss factors and security constraints, smoothing of offer profiles and the ability to value reactive power and voltage control. They note that the rules have been changed from requiring AEMO to further develop the dispatch engine to saying that it may do so. IES suggest that since AEMO is under pressure to minimise its costs from the market participants that pay its fees, it may be inhibited from carrying out such activities where they are optional. They further suggest that government could fund the upgrade project in order to minimise the cost impost on participants.

Fast Frequency Service – Treating the symptom not the cause?

The other paper covered in this article is focussed on a addressing a particular issue proposes a return to a regulatory approach as a pragmatic way to manage frequency across the NEM at minimum cost to participants. The paper is written by Kate Summers, who is the Electrical Engineering  Manager for Pacific Hydro. The premise of the paper is that good frequency response has been penalised under both the Causer Pays cost allocation regime for regulation service and the energy dispatch requirement for generators to ramp in a linear fashion between dispatch targets within the NEM[iii]. The culmination of fifteen years of economic decisions combined with control system upgrades and compliance obligations have reduced the frequency response of the power system.

Maintaining frequency within a narrow band is a key element of operating a stable electric system. The NEM operates at a standard frequency of 50Hz, so deviations from this level (due to fluctuations in demand or supply) need to be addressed and the system brought back to 50Hz. This is an ongoing process. Frequency response is mostly elicited via a series of markets operating over different timeframes. These markets are known as the frequency control and ancillary services (FCAS) markets.

Taking 2000-2001 as a starting point, the paper notes the following changes:

The requirement on each generating unit to maintain its own frequency within a deadband of 0.1 Hz (i.e. between 49.95 and 50.05Hz) was removed. Deadband compliance was achieved via governor controls on the unit.

The AER introduced a strict dispatch compliance requirement based on an expectation of linear ramping between each 5 minute dispatch interval. This has incentivised generators to prioritise dispatch compliance over maintaining tight deadbands, as these could kick in automatically and cause deviations from the ramping profile.

These changes allowed the control systems to be adjusted such that the primary governing response only started after the frequency had fallen below 49.85Hz. The changes are illustrated below: 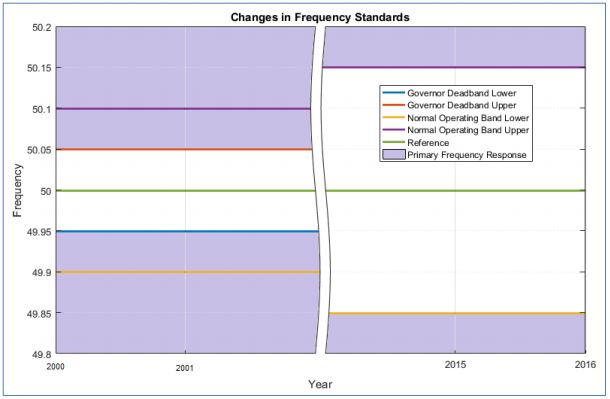 Source: “Fast Frequency Service – Treating the symptom not the cause”, 2017

The upshot of these changes is a looser approach to frequency. A response is only sought at a point of greater deviation from the standard. But eliciting a response becomes harder the further one moves from the standards. If a deceleration commences and sets in prior to the unit starting the process of increasing energy then it is much harder to arrest the deceleration as some of the machine’s momentum has been lost.

An analogy to this would be a truck requiring a run up to maintain its speed as it goes up a hill, it must accelerate (or increase its energy input) early enough to maintain the momentum, once the truck slows down it cannot easily regain its speed and can only change gears down and crawl up the hill, or worse stall.

In the paper’s view this is compounded by the current causer pays regime. The causer pays factor (CPF) calculates a factor based on figures that are derived from the market enablement for regulation services to assess whether a unit is acting in a positive or negative fashion against the Frequency Indicator “FI” figure. The FI is not a measurement that is readily available to participants, and so it cannot be used in a real time control system on a generating unit to eliminate or minimise a unit’s causer pays factor.

Further the allocating of cost is based on SCADA data collected at 4 second intervals, but such measurements are unable to measure correctly a unit’s actual frequency response. The causer pays is widely recognised as sub-optimal by market participants, but there is not currently consensus about how best to remedy it. IES argue that their approach would appropriately allocate costs and so align incentives, but it is not clear whether this is based on more favourable view of the validity of SCADA data. The metering upgrade they propose in their 2nd stage of market reform would presumably improve such measurement.

Mandated deadbands are use in other markets, i.e. they are not incompatible with an overall market-based approach to procuring energy and ancillary services. The USA PJM has a mandated deadband of +/- 36mHz. The UK Grid Code has the same normal operating band as the NEM but mandates a deadband of 30mHz.

The paper does not seek to address the role of variable renewables that use power inverter technology in contributing to system stability, whether financially or physically. Compared to the status quo, such plant would benefit because they pay towards FCAS costs via the causer pays mechanism and under these changes the total FCAS bill would be likely to be lower. Conversely, synchronous plant would likely earn less revenue as less market FCAS would need to be procured. To the extent that that frequency management was reformed in the way the paper suggests, one approach could be to make a regulated payment to generators who provided control via their governor settings.

The two proposals, while taking a different philosophical approach are not necessarily in conflict. Both recognise the shortcomings of the current approach based on 5 minute ramping and strict dispatch compliance. Both deserve evaluation by market bodies and participants and their pros and cons aired. Reform to the NEM is always a risk for participants who have invested based on the current rules, however all markets must be capable of careful evolution to adapt to changing circumstances and take advantage of technological and methodological advances. The question is whether the governance arrangements are best placed to deliver this balance – another area Dr Finkel may well have views on.

[iii] “Fast Frequency Service – Treating the symptom not the cause”, Kate Summers, 2017, p1