The Queensland state election will be held on Saturday. The ALP holds 48 of 93 seats and based on the political pundits the election could be close, although recent polls show Labor with its nose in front on a two-party preferred basis (slightly ahead of its 51.2 - 48.8 per cent winning margin from 2017). Labor holds government with a two seat majority and in many key seats the race is very close.

In contrast to the 2017 election, energy has not been at the forefront of this campaign. But energy policy commitments, such as support for the proposed CopperString transmission line in north Queensland and other regional proposals, likely reflect the importance of various seats in play. Regardless of the poll outcome, Queensland will have a new Energy Minister at the helm with the well-regarded the Hon Dr Anthony Lynham MP announcing he would be leaving Parliament prior to the election.

According to Griffith University political scientist and senior lecturer, Dr Paul Williams, the ALP’s re-election hinges on more than 30 marginal seats (held by less than 5 per cent) and nine "must watch" seats.

In the Townsville area for example, the three seats Labor holds are on small margins - Townsville (0.38 per cent), Mundingburra (1.13 per cent) and Thuringowa (4.15 per cent).

The ALP and LNP say their policies will help bring down energy prices and ensure supply. How do their energy policies compare? We take a look at some of the commitments.

Table 1: Current state of the parties

Both major parties are committed to maintaining three generators and to government ownership.

The LNP has indicated it won’t sell state-owned electricity generating assets, but has committed to a restructure of government-owned generators - Stanwell and CS Energy – to create three entities. It acknowledges the State Government created CleanCo with a mandate to develop renewable generation as a third generator. It would keep this arrangement but expand the ability of other generators to invest in renewables “when it makes economic sense”. The LNP has previously been critical of the CleanCo structure and it is not clear what final form its proposal for the three generation entities would take.

The ALP is committed to 50 per cent renewables by 2030 and committing $500 million to its renewable energy plan. As part of its COVID-19 economic recovery plan it announced $145 million to support the development of three renewable energy zones in north, central and south-west Queensland.

Labor also intends to explore opportunities for public investment in large-scale storage through the government-owned generation businesses. It has already provided support to the Kidston Pumped Hydro facility in north Queensland and released a Queensland Hydrogen Industry Strategy, which includes a $25 million Hydrogen Industry Development Fund. The fund was launched in 2019 with $15 million support and an additional $10 million was committed this week[i].

The ALP’s platform also commits it to investigating the feasibility of implementing carbon capture and storage (CCS) for existing coal-fired power stations and to not approve new fossil fuelled power stations without deploying full CCS[ii].

Apart from its push to restructure government-owned generators, the LNP has flagged the potential development of 2000MW of hydroelectricity generation through its “New Bradfield Scheme” to develop water resources aimed at “drought proofing” Queensland. As part of this it has proposed to install a serious of hydro plants. Its scheme is to be developed by increasing the size of the proposed Hells Gate Dam. The Federal Government supported a feasibility study by the Townsville Enterprise into the dam, which was completed last year and has since committed $54 million towards Phase 1 of the project[iii]. A detailed business case is not expected until 2022.[iv]

The LNP supports national renewable targets, supports renewables in principle but hasn’t committed to a state target. It is promoting household assistance to encourage energy efficiency and the take up of renewable energy technology. It has flagged the potential opportunities from renewable energy zones (REZ) but has only committed to “closely monitoring" the [REZ] trial in New South Wales”[v].

With power to the north of the state an ongoing issue, both major parties are supporting the CopperString transmission project - a 1,100 kilometre high-voltage transmission line from Townsville to Mount Isa and the state’s North West Minerals Province which would link the region to the National Electricity Market. While the government has denied it is a bid to secure crossbench support should a hung parliament be the election outcome, the project does have strong support from the local member in Mount Isa and Katter's Australian Party leader, the Hon Robert (Robbie) Katter MP. The KAP, with three seats currently held, has the potential to hold the balance of power[vii].

The estimated capital cost of the project proposed by Townsville-based private developer CuString Pty Ltd, is $1.5 - $1.8 billion. The project has been classified as a Coordinated Project and an Environmental Impact Statement is being undertaken. In May the Labor Government announced it would provide $14.8 million to help fast track the line as part of its COVID-19 economic recovery plan. In October the government announced further support by agreeing to underwrite the initial investment costs, including the EIS if needed.[viii]

While it did not disclose the size of this latest commitment to CopperString – which is also set to receive federal funding, including from the Northern Australia Infrastructure Facility – it is speculated to be more than $10 million[ix].

Yesterday the LNP committed to completing the CopperString project in partnership with the Federal Government.

On electricity prices, the LNP has promised to provide $493 million as a community service obligation (CSO), or subsidy payment, to the state-owned Energy Queensland to help businesses save up to 20 per cent on electricity costs. The aim is to remove the need for Ergon and Energex to charge manufacturing businesses a rate of return on electricity provided through their distribution networks.

It is also promising to encourage more retail competition in regional Queensland with $150 million as a network CSO paid to Ergon Energy and made available to all retailers while retaining the current uniform tariff policy (UTP)[x]. Again, the aim is to reduce the cost of distribution in regional areas and make it more attractive for retailers to compete against Ergon Energy Retail. This was one of the recommendations in the final report of the Queensland Productivity Commission’s Electricity Pricing Review[xi].

One Nation’s policies for the election are light on its energy position, but it has publicly stated its support for a new coal-fired power station and has identified a need to start work on a new high efficiency, low emissions (HELE) plant alongside the Tarong Power Station north of Brisbane and wants Queensland to keep its coal-fired plants[xii]. It has also thrown support behind the Federal Government’s funding of a feasibility study.

The Greens major policy is 100 per cent renewable energy by 2030 (up from the party’s 2017 commitment of 90 per cent). This would be through public ownership and by committing $25 billion to allow Energy Queensland to build an ambitious 20GW of wind, solar, and energy storage, including utility-scale batteries and pumped hydro, over four years. They would end privatisation in Queensland and establish Energy Queensland as a "democratic, public authority responsible for all retail, network and generation". They are also aiming to invest $6.4 billion in new transmission lines, subsidise batteries through a $1 billion household and small business battery storage rebate scheme and creating a “fairer” solar feed-in tariff.

A major part of Katter’s Australia Party’s energy policy is support of the CopperString project, but it also advocates for grants and subsidised loans for primary producers to install solar pumps and rooftop solar for properties not connected to the grid. On gas it wants to establish an automatic Australian market supply condition for any new gas produced in Queensland to prioritise supply to the domestic market.

Table 2 below highlights the key areas of each party’s energy policies. 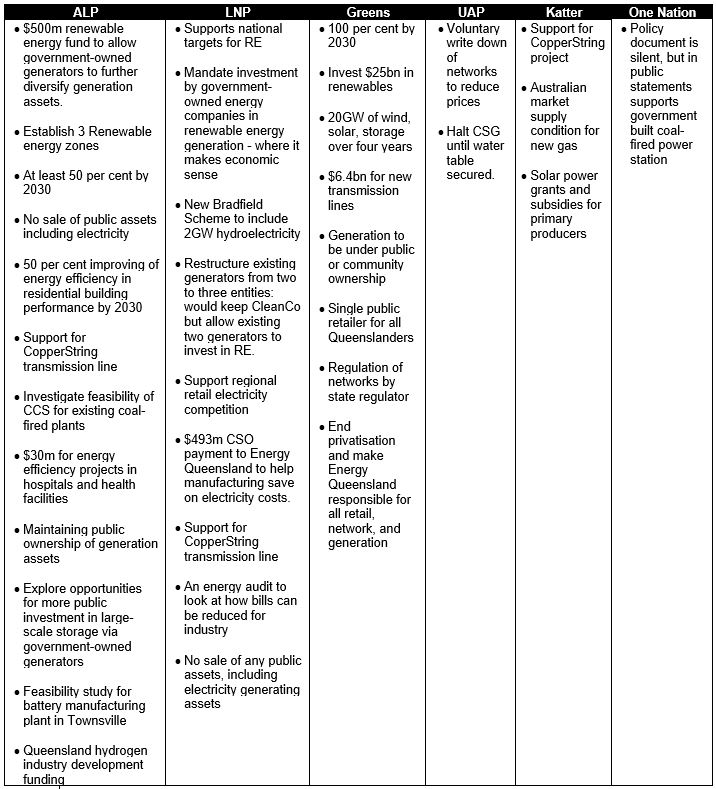