Following a fire at Callide C Power station on Tuesday 25 May, a series of events resulted in multiple generators disconnecting and 2,300MW of demand being interrupted. This was the most severe event in the National Electricity Market (NEM) since the South Australian black system of September 2016. Like all such serious power system incidents, there was a complex chain of issues that will take some time to unpick and learn from.

Following a suggestion by the Australian Energy Council in 2020, the Australian Energy Market Operator (AEMO) is now committed to publishing event reports within five business days of major incidents. While a rushed report cannot explain everything, it will be more informative than the misleading speculation and gossip that tends to spread across media and social media immediately after such events, such as ludicrous claims about the general reliability of coal plants.

Thankfully rare, major disruptions are a fact of life in all power systems no matter how robust they appear. And they will happen again. However a feature of the NEM’s energy only design, is that such disruptions lead to wild price fluctuations and large windfall gains and losses. In 2008 one of the Council’s predecessors, the National Generators’ Forum (NGF), unsuccessfully proposed a NEM rule to interrupt these price fluctuations. We take a look back at that proposal and how the issues that provoked it are equally relevant today.

Shown in figure 1, many generators were affected, most impacted were Callide B and C, Stanwell and Gladstone and about 400MW of large-scale solar. The disturbance propagated across the transmission grid in a way that will be explained in AEMO’s report. 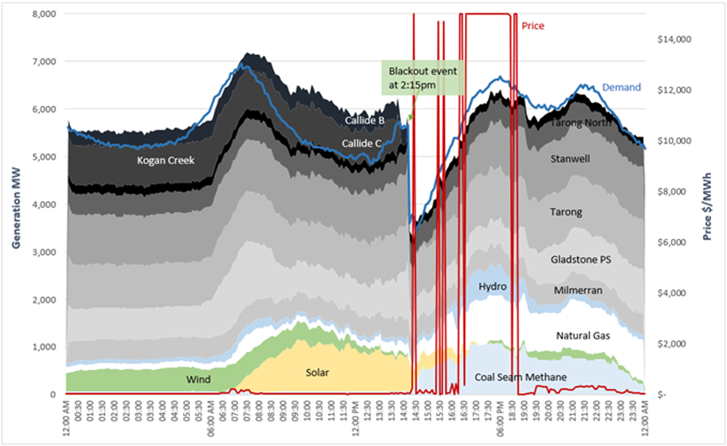 There was an initial very brief price spike, but prices then paradoxically fell because so much customer demand had been disconnected by the disturbance (blue line). This contrasts with events where the load shedding is ordered by AEMO, and the Market Price Cap (MPC) of $15,000/MWh is applied.

As the grid was restabilised, customers were progressively reconnected and demand grew. However much of the generation was still not able to run, and prices went to extreme levels through the evening peak.

Such extreme price events lead to enormous amounts of money changing hands in a very short time. To anticipate how that occurs, the role of the contract market must be considered. 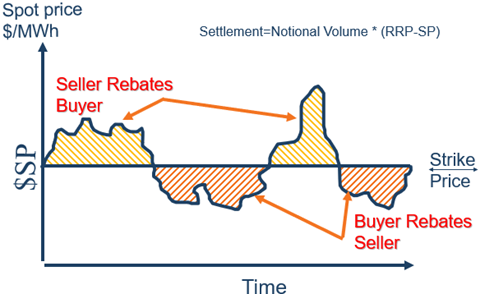 Strangely, retailers are likely to be big winners from the event. This is because they hold contract positions intended to protect them from high prices, multiplied by a “notional volume”. Notional volume is typically fixed at something like the peak demand expected for this time of year. This is designed so at the time of peak demand, the retailer will be receiving from the contract about the same money as it is paying AEMO on behalf of its customers. However, 25 May was a mild autumn day with a low demand, and many of the retailers’ customers were disconnected by the disturbance. Therefore the contracts will pay the retailers more than their liabilities to AEMO. This is called being “long” to price.

The big losers are the generators who were interrupted by the disturbance. They will have sold those contracts to the retailers and will have to make large payouts. That would be fine if they were generating during the high prices: the money coming in from AEMO would have covered these payouts. However many weren’t generating, and were therefore “short” to price.

While the details are yet to fully emerge, it is clear that for most (if not all) of the affected generators, the incident arose through no fault of their own.

Do we need these prices?

Thanks to its high price cap, the NEM is a risky place, and for good reason. The fear of being “short” to high prices is what makes participants contract. Firstly that is aimed at the retailer, who must consider what its customers are likely to consume, and seek to contract to cover their peak. In turn those contracts underpin investments in generation that can be relied upon to meet that peak.

It is good that generators are also frightened of being caught “short”. We don’t want them to sell more notional volume of contracts than they are confident of physically generating at a time of high prices. For example, a solar generator should not enter a contract that results in them paying out at night. A conventional generator must contemplate a chance of a breakdown at a critical moment, and would likely sell a notional volume below their maximum capacity. This way the contract market effectively funds a quantity of reserve generation distributed across the power system.

But the generators only anticipate plant failure within reason, typically no more than one unit in a power station. We don’t want them to worry about extraordinary events because they would sell few, if any, contracts.

Engineers often describe this in terms of credible and non-credible events. The former are things that a prudent power system should be planned for. The second are those that are so rare and/or extreme that planning for them would involve an imprudent waste of customers’ money. Lawyers might describe the latter as force-majeure events.

Force-majeure in the NEM

When the NEM was being designed in the 1990s, a force majeure mechanism was included. Events beyond the reasonable scope of planning were to trigger market suspension, and hence not expose players to unmanageable risks (nor create unintentional windfalls). It was thought that by reducing such risks, lower financing costs would result, and ultimately lower prices.

Such a market suspension can also be helpful for security. The intense pressure created by extreme prices during a disturbance drives behaviours that are difficult for the market operator to manage.

The challenge however was defining a clear set of events that should lead to trigger a suspension. Eventually at NEM start the list was reduced to only:

Clearly in these cases pricing is inoperable. In all other events, high prices are permitted until a Cumulative Price Threshold (CPT) is reached: the equivalent of 7.5 hours of the Market Price Cap.

The CPT is an extremely important safety valve, which should avert the sorts of extreme payment that can trigger widespread financial defaults, such as those that happened recently in Texas.

But, while the CPT may save the furniture, large wins and losses can still happen before it triggers. After a bushfire in January 2007 caused a widespread transmission disruption , the NGF proposed re-inserting  force-majeure into the rules, noting:

The NGF’s rule change was considered, but ultimately rejected by the Australian Energy Market Commission (AEMC). The AEMC took into account the views of the National Electricity Market Management Company (NEMMCO) that expressed a dislike of operating the trigger.

By the time of this rejection, 30 months had passed since the January 2007 event, and the need for a force majeure mechanism had been largely forgotten. But as this Tuesday demonstrated, these events will keep happening and the rationale for the resulting large and random money flows is likely to be re-questioned.