Power quality, the Dark Side of the Moon

South Australia has become a world leader in the integration of intermittent renewables.  The state now has around 41 per cent of its electricity generation supplied by wind and solar.  This is more significant given South Australia’s geography: it sits at the edge of the National Electricity Market (NEM), with no access to hydro or other zero emissions firm generation, and only constrained (25 per cent of peak demand) interconnection to Victoria.

Of course, intermittent renewable generators like wind turbines do not operate like conventional thermal generators.  They are asynchronous, meaning their output voltage frequency is regulated by the grid.  They cannot supply frequency management services and operate at varying levels depending on the wind speed and solar irradiation at the time.  They are not a like-for-like replacement to conventional thermal generation.

This poses (at least) two major technical challenges when a grid reaches high (more than 40 per cent) penetration of intermittent renewables: (1) meeting maximum capacity during times of peak demand, and (2) maintaining power quality at times of low demand.

The more recognized challenge is having enough electrons to supply maximum demand events, which in South Australia typically occur at the end of 3-4 day heatwaves during the summer.  As we have seen in South Australia, forcing in new renewable generation into a static growth market weakens and eventually destroys the business case for some thermal generators.  This will eventually create capacity problems when those firm generators will be needed to ensure supply during peak demand events, but will have already closed.

This is a planning challenge and the Australian Energy Market Operator (AEMO) has been tracking the supply-peak demand balance closely in South Australia.  It raises tricky questions about whether and how you can attribute a proportion of firm generation from the state’s fleet of wind farms.  While the supply-peak demand balance is getting tight, AEMO is currently satisfied there remains sufficient capacity in South Australia to manage these events, contingent on continued access to Victorian capacity via the Heywood and Murraylink interconnectors.  Without augmentation of the grid in some substantive form or greater incentives for new generation plant, a peak capacity limit looms large.

The second issue, that of power quality, is possibly more ubiquitous and more challenging.  The modern electricity system has been built around large industrial and controllable generators able to provide stable frequency and voltage across the network, by adjusting the spin rate of their rotor to match the required frequency of the grid.  The provision of these frequency control ancillary services (FCAS) is a critical part of maintaining power quality in the grid.  Without it, the system is unable to operate without unacceptably high risk of equipment damage and black outs.

FCAS services are one of a small number of ancillary services required to manage power quality and system support, including system restart (SRAS) and network support and control (NSCAS).  Historically, the costs of FCAS services have been valued at around $30 million a year across the entire NEM (relatively small), and are paid to a number of mostly larger generators who contract to provide regulation (instantaneous) and contingency (response) services to manage frequency across the grid.

FCAS services have become increasingly important where there is a high penetration of asynchronous (intermittent renewable) generation.  There are increased risks of frequency control being compromised when asynchronous generation is the dominant form of generation resulting in only a single source of frequency management available.  In these situations of lower demand there is an increased risk of load shedding if there is a fault with the single firm generator.

During the history of the NEM to date, the FCAS market was defined by an abundance of service providers and a low marginal cost of service provision resulting in both a reliable grid and very low cost of FCAS services.  This has been a good outcome for customers.  It is still unclear how the FCAS market may respond in the future to reduced availability of FCAS providers in parts of the grid (particularly South Australia). The nature of ancillary services is that they are unlikely to provide sufficient revenue to underpin new investment, so new providers are only likely to emerge due to investment signals in the energy market. 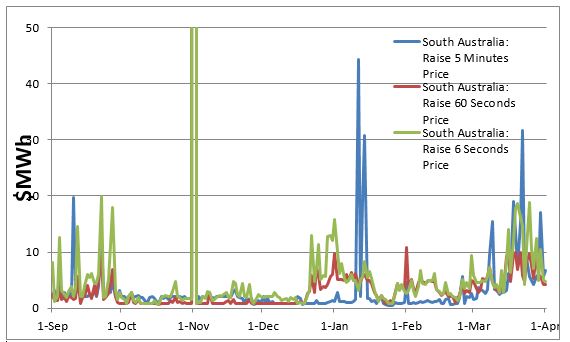 To illustrate this, recent reliability events in South Australia relate more to power quality than capacity.  An unplanned (low demand) outage on the Heywood interconnector on the evening of Sunday 1 November 2015 resulted in a significant blackout in Adelaide.  This was not a capacity problem.  This was a power quality problem.  It was caused by a lack of local synchronous generation being able to recover frequency levels in South Australia once the state had been islanded from the NEM.  It resulted in the forced outage of more than 110,000 households.

Following this, an unplanned outage on the Heywood interconnector on 26 March 2016 resulted in AEMO requiring an increase in supply of FCAS services in SA and resulting in a spike in the price (to the then market price cap of $13,800).

One possible observation of the dynamics of FCAS markets from these events is that it they appear to be binary:  prices are either very low or very high depending on the scarcity of FCAS service providers at a given point in time.  It may also be possible that the market is now undervaluing FCAS even though supply is constrained, because of imperfect information: a long history of reliability and abundance has created a market value for FCAS which is based on historical trends rather than future scarcity.

The other side of the coin is demand for FCAS. The National Electricity Rules require that FCAS is allocated on a “causer pays” basis. But allocating this is not always easy:  FCAS is a two-way service where an action can either reduce or increase the requirement for the service, depending on the aggregate situation across the rest of the system.

The changing role and value of the FCAS market is not simply a renewables integration question.  If the efficient and reliable decarbonisation of the electricity system is to be delivered primarily by market measures, then the FCAS market and the value of inertia are markets that are likely to be helping to signal appropriate investment and supply of these types of services, particularly as the synchronous/asynchronous ratio changes.

If these markets cannot or do not fully value these services so that their scarcity compromises system reliability, it is extremely likely governments will seek to impose their own solutions.  If the past decade of reactive government policy decisions is any guide, there is no guarantee that these solutions will be either fully effective or efficient.