The International Energy Agency (IEA) has just released its latest energy projections, which highlight the shifting trends in electricity generation globally as well as the continued growth in energy demand.

The World Energy Report includes energy projections to 2040. The central projection is based on its new policies scenario, which draws on policies, targets and plans in various jurisdictions to assess what they could mean for the energy sector.

The IEA expects global electricity demand to rise by 60 per cent to 2040, with more than 85 per cent of the global growth coming from developing economies and motor systems, appliances, cooling and information and communication technologies (ICT) responsible for the bulk (75 per cent) of the international rise in electricity demand (see figure 1). 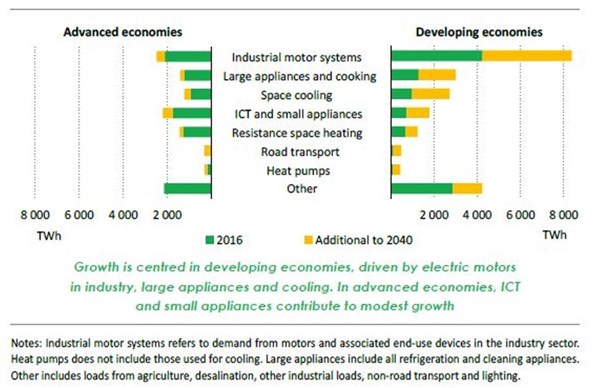 Despite the increased demand, the IEA also anticipates that energy efficiency and structural changes will break the link between economic growth and electricity demand.

It highlights that in the past year there has been significant policy changes in the power sector in major economies, especially reflected in a move away from coal to renewables.

It projects that with these shifts international gas-fired capacity will overtake coal by 2030, while solar PV goes past wind by 2025 and hydro by 2040 (see Figure 2). It notes that coal capacity continued to grow, but at a much slower pace and it is increasingly concentrated in Asia. 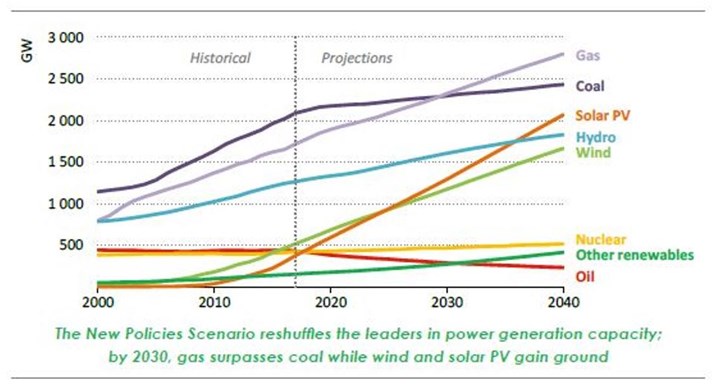 While nuclear generation is confined to a small number of countries, renewables expand everywhere. The global growth in electricity supply to 2040 is mainly from wind and gas (with each accounting for 23 per cent of supply) and solar (20 per cent).

“The share of fossil fuels in generation falls from two-thirds today to half by 2040, while renewables rise from 24 per cent to 40 per cent. Nuclear’s share is steady at about 10 per cent and China is the global leader by 2030,” the report forecasts. Figure 3 shows the projected capacity additions and retirement by technology and region.

The rise of renewables and power plant efficiency gains will mean that the use of fossil fuels in electricity generation “decouples” from electricity demand. It points to its prediction that gas-fired generation will increase by close to 60 per cent from last year to 2040, while related gas use rises by less than 40 per cent because of more efficient plants.

Total investment in the power sector to 2040 is estimated to be US$19.3 trillion, with renewables capturing two thirds of this spend. It notes that while subsidies for renewables were US$140 billion in 2016, mainly from feed-in tariffs, competitive approaches such as auctions are set to become dominant. The IEA expects that this trend will lead to a lower global average subsidy per unit of output from new solar PV by 70 per cent and by 40 per cent for wind by 2030.

Between 1990 and 2016 global electricity demand doubled and the IEA expected this trend to continue as rising incomes in developing countries will lift demand for electricity-based services and “the 1.1 billion people who currently lack electricity gain access”. Demand has notably slowed in advanced economies since 2008-09 and more recently in developing economies, such as China. In contrast, growth in demand in India went from 6.8 per cent a year between 2000-2013, to 7.4 per cent a year since 2013.

In 2016 renewables led the way adding 165 GW of capacity and outpacing growth for all other sources combined. The global increase in solar PV at 74 GW last year was almost a quarter of the total generation capacity installed. China led the way by installing 34 GW of solar.

Globally, wind capacity increased by 52 GW in 2016, down 20 per cent compared to 2015 which was the “high-water” mark and China, again, led the charge by installing an extra 20GW.

The IEA notes that policy and market frameworks continue to play a critical role in the success of wind and solar PV, but the preferred method is shifting towards auction schemes, which have been able to deliver “some remarkably low guaranteed prices for the electricity delivered by renewables”. Solar PV continued to set new record lows in 2016 – as low as $30/MWh in some regions including Mexico, UAE and Chile. 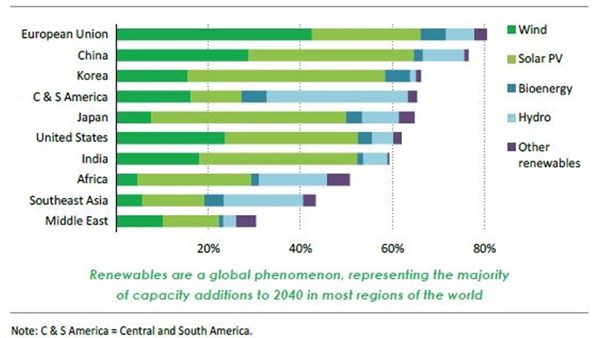 For a second year in a row more than 10 GW of nuclear capacity came online in 2016, with a further 60 reactors with a combined capacity of 65 GW under construction at the start of 2017. Over a third of the new builds were in China. The IEA did note that only 3 GW of new construction was started in 2016 – about half the average rate of the previous five years. 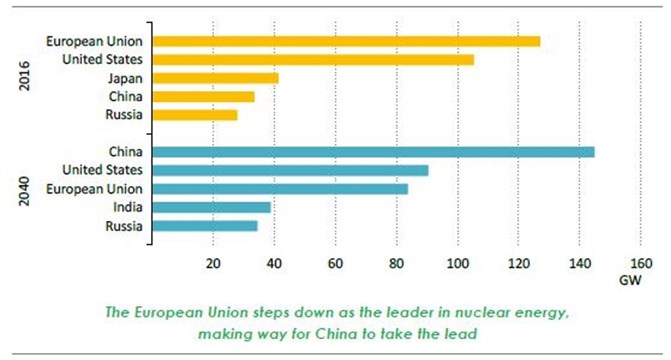 Gas-fired capacity has expanded by 20 per cent since 2010 and has been the preferred dispatchable option in advanced economies for the past 10 years. Combine cycle gas turbine plants made up nearly 75 per cent of all new gas capacity since 2000. The IEA expects these flexible, high efficiency plants to change the balance and efficiency of fossil-fuel consumption in the power sector and points to the availability of cheap gas in a number of countries and especially the US as a key factor.

Since 2000, 1100 GW of coal-fired plant has been built with 780 GW of that occurring in China. In 2016, 83 GW of coal-fired generation was added, the most for any technology. More than 210 GW of coal capacity is under construction, with 90 GW being built in China, almost 50 GW in India and close to 25 GW in Southeast Asia. Retirements have also accelerated in many countries, particular the US where 26 GW of coal plant has closed in the past two years.

Between 2013 and 2016 total coal-fired generation’s share of global electricity supply fell from 41 per cent to less than 38 per cent, although it remained the largest single source of electricity. And even in China a combination of overcapacity and an increase in renewable capacity have meant utilisation rates for coal plants has fallen – the capacity factor fell from 60 per cent in 2011 to 49 per cent in 2016.

The IEA reports that lithium-ion batteries and digitisation of the power sector are two emerging developments that have the “potential to change the nature of the sector”. It says that the interest in batteries is growing as their costs fall and batteries are increasingly being considered for use at utility-scale and point of consumption.

California has been grappling with a challenge familiar to parts of Australia’s energy market – how to make a seamless transition to a lower carbon grid. In California, as with South Australia in 2016, the transition was put to a stress test by a weather event. In the case of the US state it was a heatwave described as one of the worst in years leading to rolling blackouts.

Aug 27 2020
Read Analysis
GET IN TOUCH
Do you have a question or comment for AEC?