The Senate Environment and Communications References Committee is undertaking an inquiry into the retirement of coal-fired power stations. The inquiry was driven by the Australian Labor Party and Australian Greens[1], with the Greens senator Larissa Waters (the chair of the committee), stating: “We need a plan for the orderly phase-out of coal-fired power stations as we make the transition to clean energy.”[2]

The Senate committee inquiry examines: the closures of coal-fired power stations and the consequential economic, social and community costs; the policy mechanisms to alleviate these costs having regard to Australia’s international climate agreements, the transitioning electricity sector, and maintaining electricity supply, affordability and security. [3]

With the most recent announcement of the closure of the Hazelwood power station in March 2017, there is increasing concern about the future security of the electricity system, as well as the potential for an increase in electricity prices as coal-fired generation is withdrawn from the market.[4]

This recent announcement highlights the transitioning electricity market, and that Australia should manage the transition that supports investment decision making and Australia’s international climate commitments. How to best manage this transition in the interests of all stakeholders, is what needs to be explored.

The Australian Energy Council will be appearing as a witness at the second public hearing in Melbourne on Thursday 17 November. It seems that only two out of 15 Australian coal-fired generator companies have been asked to appear at the public hearings, AGL and Energy Australia.

The transitioning electricity sector will continue to evolve due to technological developments, increased use of renewables, and energy user choices. The further deployment of low and zero emissions generation as well as a reduction in emissions across the sector will be necessary if the sector is to contribute to the national emissions reduction task. As such, the role of coal-fired power stations in the electricity sector will change, however it is important to acknowledge the benefits of coal-fired power stations as a source of generation.

Coal-fired power stations provide a number of valuable services to the electricity system:

In regards to inertia, the speed rate of rotation of generators on the network determines the frequency of the system. As such, the greater the inertia in the system the less the network is susceptible to frequency variations outside the normal operating parameters due to sudden disturbances. Coal-fired power generation (‘synchronous’ generation) provides large levels of inertia. Wind and solar generation are asynchronous and are instead based on power electronics, as are batteries. This does not currently allow asynchronous generation to provide inertia, although the industry is investigating ways for renewables to potentially provide ‘synthetic inertia’. 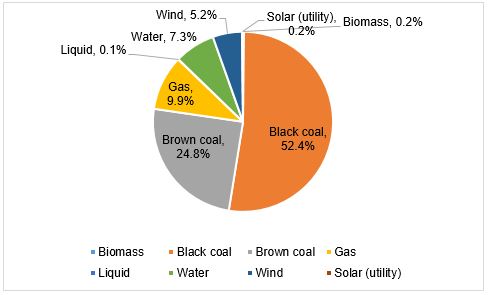 In a market where coal-fired and other dispatchable generators are leaving the market, such as in South Australia, the ability to obtain dispatchable services locally becomes increasingly challenging. While interconnectors can assist with providing both energy and ancillary services from other regions, a reduction in dispatchable generation will make NEM regions, such as South Australia, more vulnerable when the interconnectors are not available or are constrained. It is also likely to result in higher prices for both energy and ancillary services, and lower levels of inertia. Lower levels of inertia will result in the power system experiencing a higher Rate of Change of Frequency (RoCoF) during a system disturbance than is currently the case, leading to greater potential for cascading failure events, like those recently experienced in South Australia.

Australia has undergone a number of policy changes over the past 15 years, which has resulted in a mismatch of Commonwealth and state policies and led to investment signal distortions in the market. This has resulted in the energy industry not being able to anticipate the necessary changes and make appropriate investment decisions to achieve a secure, reliable energy market. The numerous carbon and energy policies initiated by individual jurisdictions are resulting in increased cost and higher risk for energy users and challenging the integrity of the NEM.

Therefore, Australia should manage the transition away from emissions intensive generation in an orderly manner that supports investment decision making and Australia’s ratification of the Paris Agreement. The transition should also ensure the affordability and reliability of the energy market. Ideally this could take the form of an economy-wide scheme like a cap-and trade scheme or carbon tax. Regardless of the design of the price mechanism, high carbon prices will significantly negatively impact emissions intensive generation. This could lead to multiple closures within one region placing pressure on system security and regional communities simultaneously. It would also lead to significant asset value loss for the owners of those generators, making it difficult to re-invest in replacement capacity.

The Energy Council is committed to supporting robust, evidence-based policy processes and welcomes stable, long term energy and climate policy. As the electricity market is experiencing increasing penetration of renewables, mechanisms to ensure electricity security need to be made in light of this change.

Regarding social and community impacts of coal-fired power station closures the Energy Council considers that the government should be the body to assist in the just transition of the coal-fired power stations. Ideally, all levels of government should work together to create opportunities for displaced workers and other transitional support policy mechanisms for the affected communities more broadly.

Some climate policy organisations advocated for governments not to subsidise the costs of keeping coal-fired power stations running or individual units running within an existing station[7]; and developing a stable long-term policy framework to get to net zero emissions[8]. Unions had a greater focus on a national ‘coordinated plan to deliver a Just Transition for coal-fired electricity workers and communities’[9] and for Government to create a stable energy and climate policy platform[10].

The most immediate barrier for Australia’s electricity sector successfully transitioning to a net zero emissions economy, which includes the eventual closure of coal-fired power stations, is the absence of a national long term climate and energy policy. Major investment is required for future energy generation, as coal-fired power stations are decommissioned. Such investment will not take place unless there is policy that investors expect to last through multiple election cycles.

Delayed national policy, and mismatched Commonwealth and state energy and climate policy will increase costs and see the potential early closure of coal-fired power stations, leaving the energy market open to supply, affordability and security issues, as demonstrated by recent events in South Australia. To assist and manage the transition towards a net zero emissions economy, a national, stable climate and energy policy is required.

We will have to wait and see what the Senate committee recommends with an interim report to be released by 28 November 2016 and the final report by 1 February 2017.