On 9 November the NSW Government published its “Electricity Infrastructure Roadmap”.[i]  Is it the path to the promised land – or a highway to hell?  We take a look.

The NSW Government has correctly identified that the National Electricity Market (NEM) is in transition, as aging conventional thermal generation retires, and is replaced by variable renewable energy generation supported by “firming” technologies such as gas-fired generation, pumped hydro and batteries to ensure the power system operates securely and reliably.

To facilitate these plans the NSW Government will establish the Energy Corporation of NSW, which will coordinate the delivery of the REZs in the regions listed throughout the state.  It will take a holistic view of REZ infrastructure delivery, and will be able to restrict network connection of projects over 30MW in REZs where reasonably necessary to maintain social licence, such as where projects would be in close proximity to towns and face strong local community opposition.

In addition, a “Consumer Trustee” will be appointed to “protect the long-term interests of consumers”.  The Consumer Trustee will award Long Term Energy Services Agreements to a total of 12GW of generation and 2GW of storage, and will on-sell the energy to retailers or NSW companies.

The detailed structure of the Agreements will be developed over time, but they will protect successful developers from market returns below their investment cost.  This will be done by put options giving “optional access to a competitively set minimum price for their energy service”.[ii]

Thus, if market conditions are strong, the developers will earn good returns, whilst downside risk is removed.  But risks don’t simply disappear of course; the Trustee’s losses will be recovered from distribution network businesses, who will pass them onto consumers, as yet another socialised energy levy.  However some energy-intensive trade-exposed industry will be exempt, which seems to be a reference to highly price-sensitive (and politically influential) aluminium smelting.[iii]

The Trustee is obliged to enter these Agreements with the minimum 14GW of capacity, whether or not it is needed, and regardless of whether the market is also investing – the numbers are hard-wired into the legislation.  However they have some freedom in terms of timing (subject to the target date of 2030), which they are to use to both increase reliability and suppress market prices.  The additional firming capacity is to be selected when the Energy Security Target is forecast to be breached.

The legislation also explicitly bans entering Agreements with existing or “committed” plant (i.e. that which is under, or close to, starting construction).  This means incumbent plant can be adversely affected by the policy – through its support to new competitors – but cannot access it. Even generators which require only a small degree of support to remain in business would be excluded.

Included in the documentation is a summary of market modelling carried out by Aurora Energy Research.  This has focussed purely on the customer impacts – not resource costs as per standard economic policy research.  Unsurprisingly, Aurora finds the suppression on NSW wholesale prices, and other states’ prices, caused by the Government introducing such a large quantity of supply into the market to be substantial.  Aurora considers customers’ savings in wholesale prices will outweigh their contribution to the Trustee’s losses.

Figure 1: Modelled time-weighted NSW Prices with the Infrastructure Safeguard and without (BAU) 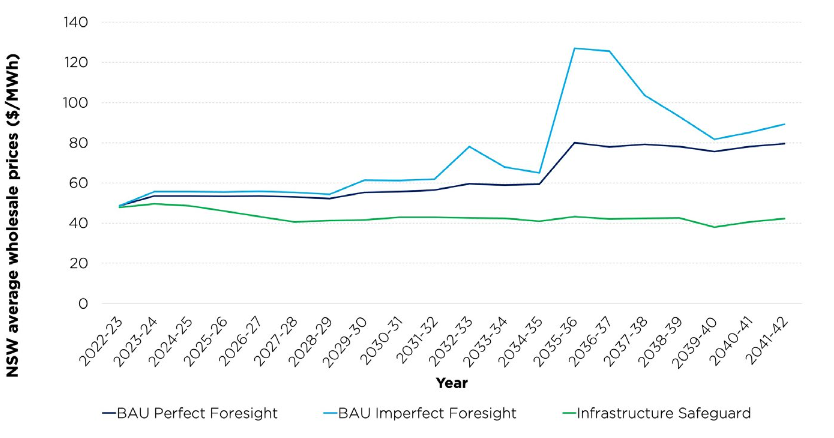 It is intuitive that subsidising early entry through de-risking it will create an oversupply that in turn suppresses prices for customers and existing generators.  It would seem however that this modelling does not anticipate the suppressed prices driving the disorderly exit of existing plant, that would in turn create a strong price rebound.

Is the sky really falling?

The Government is concerned about expected power station retirements, illustrating the problem with the following graph: 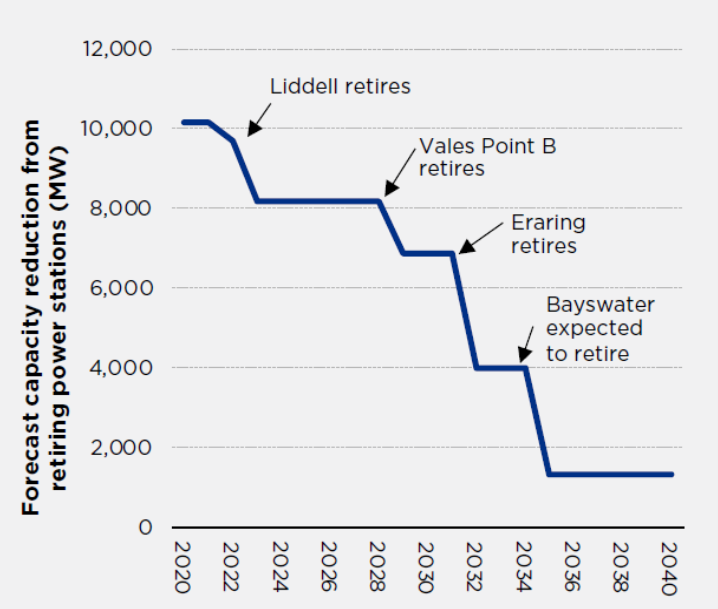 AEMO’s ESoO shows that Average Unserved Energy will exceed the Reliability Standard in 2029-30, and marginally exceed the much more stringent Interim Reliability Measure in 2023‑24, as shown in the following graph: 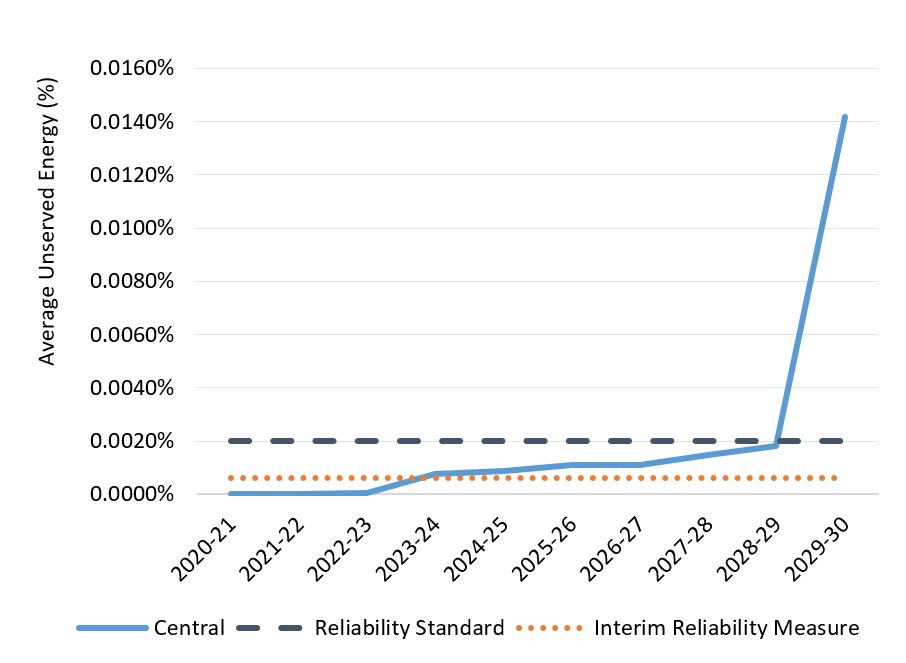 It is worth noting the difference between the two reliability measures.  At 0.002 per cent of average unserved energy, this is equivalent to about 10.5 minutes off supply each year solely due to the generation outages.  The minimum standards for network outages allow much longer interruptions, e.g. the average duration for outages in Ausgrid’s urban network area is over 52 minutes.[v]  The tighter Interim Reliability Measure of 0.0006 per cent allows just over 3 minutes of generation outages a year.

The proposed Energy Security Target is even more stringent, requiring the 1-in-10 year maximum demand to be covered plus a reserve margin of the two largest units.  This reserve margin equates to 1,360MW, which is about 9 per cent of the state’s scheduled generation.

This target has not been seen since before the days of the NEM, when it was used as the Electricity Commission of NSW’s planning standard.  It then led to the construction of an overhang of NSW capacity in the early 1990s, which was arguably the prime catalyst for the reform of the sector and the NEM itself.  The standard was sensibly ditched at NEM start in favour of the Reliability Panel’s economic standard shown above.  And, as a deterministic “N‑x” standard, it is obsolete compared to the probabilistic approaches employed by the Australian Energy Market Operator that directly simulate and assess power system risks, as is necessary when dealing with variable generation.[vi]

It is also well out of step with what customers are willing to pay for, as evidenced by the most recent report by the AER on the Value of Customer Reliability, which showed that customers in NSW would pay less for customer reliability than they would five years ago. 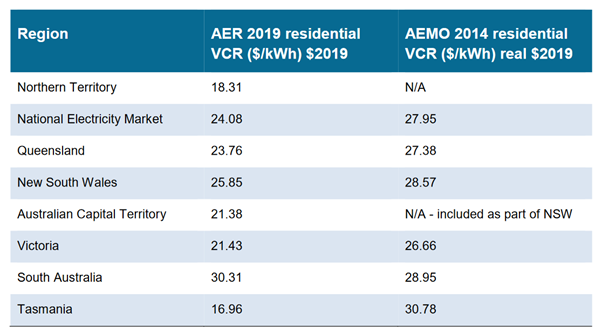 What will the result of this government intervention be?

The Trustee is obliged to introduce at least an additional 12GW of generation capacity by 2030, along with 2GW of long-term storage, under Agreements that immunise the generation from downturns in the market. This is to occur regardless of market conditions, e.g. even if such generation emerges naturally through the market, or if demand declines, or surplus supply from other states renders it unnecessary.

The scale of the scheme seems certain to undermine the investment signals produced for the market, indeed the documents explicitly acknowledge this:

Those who were close to investing in New South Wales in response to market signals are already pausing those plans.[viii] This is hardly surprising; it would not be commercially rational to exclude yourself from a very lucrative government Agreement by achieving “committed” status ahead of the first tendering round.

And such a pause runs in direct conflict with another layer of government, the Commonwealth, which recently challenged energy companies to immediately invest in New South Wales[ix] firm capacity or have it intervene to do so. Indeed that ultimatum came with the claim that energy companies had had long enough to replace the closing Liddell plant, and it was now time for them to commit. The release of the Roadmap suggests that their waiting was in fact very prudent.

The Roadmap also sends into confusion the Energy Security Board’s (ESB) Post 2025 review work. This had been looking into whether the NEM required an additional “Resource Adequacy Mechanism” in order to ensure the market invested in an efficient level of reliability. This work appears to have been entirely gazumped, at least in the NEM’s largest region, by a state government insisting on the construction of the larger of 14GW of new capacity, or whatever is needed to achieve a reliability target well in excess of the efficient level.

Another contradiction is with AEMO’s work on the Integrated System Plan (ISP) which has proposed a modelled $9.7b toward national sharing of resources.[x] This large investment was justified because it:

Indeed, with respect to the latter point, the AER is considering TransGrid’s contingent project application for the recovery of $1.9b from NSW customers as their share of the SA-NSW interconnector, Project EnergyConnect.[xi] Much of that line’s justification is the release of surplus renewable energy in South Australia into New South Wales. However the NSW Roadmap gives that line something of a “coals to Newcastle” characteristic.

As the Roadmap will shortly be legislated, AEMO will take it into account in the modelling of its 2022 ISP. The forced surplus of renewable energy and firm capacity in NSW will turn AEMO’s previous calculations on their head, and seem likely to undermine the benefits case of many of the 2020 ISP’s recommended large projects.

The NSW Roadmap’s legislated REZs also runs counter to the transmission planning model of the NEM, which has been attempting to move to a more national and independent approach through the Finkel Report’s recommendation of the ISP, and the ESB’s efforts to make the ISP actionable and to create a national independent regime for the developments of REZs.[xii] The Roadmap seems to turn REZ development into exactly what these processes were intending to head off: parochial state government industry policy, rather than national economic efficiency.

It is worth reflecting on the key problems that were identified in the electricity system in the early 1990s by the Industry Commission and Hilmer Report[xiii] that ultimately led to the disaggregation of the industry and creation of the NEM. Those reports identified an industry characterised as:

In so many ways, the NSW Roadmap seems designed to revert to that era.