Much like Australia, the closure of thermal generation to reduce CO2 emissions has been a key part of New Zealand’s energy transformation.  A recent forecasting report by the Ministry of Business, Innovation and Employment (MBIE) predicts that over 3,000 MW of geothermal and wind generation capacity will be built between now and 2040. Despite New Zealand’s move to reduce CO2 emissions there have been issues with security of supply, due to the closure of firm generation and the increase in the uptake of wind.  Subdued growth in residential and commercial electricity demand has also had an impact and is expected to continue, which is likely to impact the life of the firm generators.

The gradual closure of thermal generation across New Zealand is shown in Table 1. In 2014, 79.9 per cent of electricity generation came from renewable resources, increasing from 75.1 per cent in 2013[i].

Table 1: The loss of generation capacity

The ‘Electricity Demand and Generation Scenarios’ (EDGS) report, published by the Ministry of Business, Innovation and Employment (MBIE) in August 2016 shows that the percentage of electricity generated from renewable sources is forecast to grow to meet increasing demand across all scenarios. The ‘Global Low Carbon’ and ‘Mixed Renewables’ scenarios are used[ii].  The Mixed Renewables contains a mixture of geothermal and wind plants built from 2020 onwards, and the Global Low Carbon scenario contains high carbon price and lower renewable cost leads to more renewable build assumptions.

It is expected that New Zealand will have 790 MW and 2,530 MW of new geothermal and wind capacity built respectively between now and 2040.  The report claims that wind and geothermal plants are the cheapest to build and have a long run marginal cost (LRMC) ranging from $80 to over $100 per MWh.  The forecasts assume the closure of New Zealand’s only aluminium smelter scheduled for 2018 and the retirement of the remaining large coal-fired generators. The report also emphasises the prediction that there will be higher uptake of electric vehicles (EVs) which could be met by solar photovoltaic (PV) with batteries, wind and geothermal.

In the Global Low Carbon scenario, 90 per cent of renewable generation will be reached by 2020, while roughly 85 per cent will be reached under Mixed Renewables scenario. Figure 1 provides wholesale electricity price indicators under two different scenarios, assuming lower cost plants are built first in each case[iii].  It can be seen that the wholesale electricity price increases as more expensive plants are built. Under the Global Low Carbon scenario, prices increase at a lower rate than in the Mixed Renewables scenario at the start of 2020, partly because of the lower marginal cost of new wind generation. 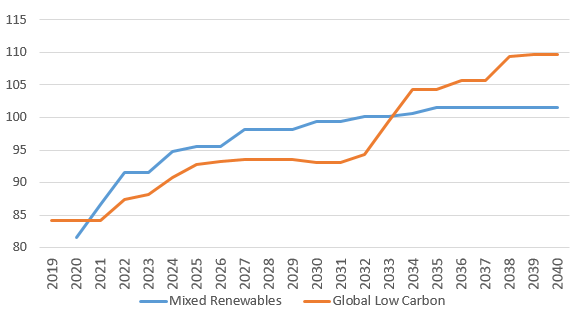 Despite forecasts suggesting New Zealand’s transformation to wind and geothermal, a recent announcement by Genesis Energy and other electricity generators stated that they will extend the operational life of their coal and gas fired stations.  Rankine Units at the Huntly Power Station have entered into contracts which will keep the two coal/gas stations available to the electricity market until December 2022, an extension of the previously announced closure date of 2018[iv].

There are various reasons which could be attributed to this announcement. One includes the issue of system security which was recently assessed in a review of Transpower’s 2016 Security of Supply Annual Assessment[v]. The report reveals the following conclusions:

With the Tiwai smelter likely to continue operating, this could be a focal point for deciding whether generators such as Huntly should remain open.  In recent years, relatively flat growth in consumer and industrial demand for electricity have led to the retirement of numerous coal plants. 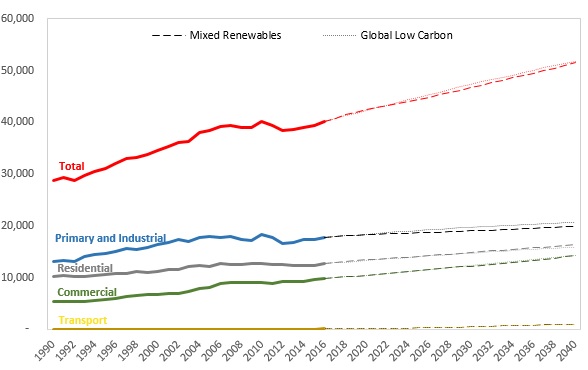 Assuming the same GDP and demographic, electricity demand in the Global Low Carbon scenario is higher than in the Mixed Renewables scenario for the majority of the 2020s and 2030s. The high carbon price assumption (under the Global Low Carbon model) causes a fuel-switch from high carbon intensive fuels to electricity, especially in the primary and industrial sectors (see Figure 2). Also, assuming EVs will eventually become economic, “increasing to over 40 per cent of new cars by 2040”[viii], there would be an increasing demand in electricity under Global Low Carbon scenario. Residential and Commercial electricity demand have the same growth under the two scenarios.

[i] Energy in New Zealand 2015, Ministry of business, Innovation & Employment

Apr 01 2021
Read Analysis
GET IN TOUCH
Do you have a question or comment for AEC?