LCOE reflects the cost to build and operate a power plant per unit of generation, annualised over the cost-recovery period, while the LACE represents a new power plant’s value to the grid.

It’s the first time the EIA has included LCOS in its modelling, and while similar to LCOE, it considers whether the storage is contributing to generation or drawing electricity from the grid, so it is calculated based on whether the battery is used to supply the grid or providing services.

Because LCOE and LCOS don’t capture all factors that contribute to actual investment decisions it makes direct comparisons across technologies challenging and, according to the EIA, misleading as a means to assess the economic competitiveness of alternative generation.

That’s why the EIA also outlines economic competitiveness by considering the value of the plant in serving the grid – this is the LACE.

“This provides a proxy measure for potential revenues from sale of electricity generated from a candidate project displacing (or the cost of avoiding) another marginal asset.”

The EIA adds the value over a project’s financial life and then converts the total into an annualised value by dividing by the projected average output of the project.

While more challenging to calculate, it provides a “more intuitive indication of economic competitiveness for each technology” than just LCOE or LCOS when looking at a range of technologies that could be used.

LACE-to-LCOE and LACE-to-LCOS is calculated to give a value-cost ratio for all generation technology to establish which project would give the most value compared to its cost. Projects with a ratio greater than one – LACE is greater than LCOE or LCOS – are considered the most attractive to build.

“Estimating LACE is more complex than estimating LCOE or LCOS because it requires information about how the grid would operate without the new power plant or storage facility entering service.”

EIA calculates LACE based on the marginal value of energy and capacity that would result from adding a unit of a given technology to the grid.

It takes account of both daily and seasonal variations in demand and the make-up of the existing generation fleet. It compares potential new generation against the mix of new and existing capacity that would be displaced. Wind generation that displaces gas-fired peaking capacity would have a different value to wind that pushed out Combined Cycle Gas Turbines (CCGT) or coal-fired generation with low fuel costs.

In its latest assessment the EIA found the capacity-weighted average value-cost ratio is more than one for both stand-alone solar (defined as solar PV with single axis tracking) and hybrid solar PV (which includes a four-hour battery storage system) in 2026  (see figure 1 below).

As a result, they are considered the most likely to be built in favourable regions. CCGT plants with a value-cost ratio of one is likely to be attractive for marginal capacity addition. Geothermal, which also has a value-cost ratio above 1, is limited by available resources. For example, the US only has 2.5GW of operating geothermal capacity and nearly all is in California and Nevada. Last year it produced about 0.5 per cent of the electricity generated, according to the EIA.

Obviously, this approach will not capture all factors behind a potential decision to build – there may be mandated targets for renewables, future environmental policies, fuel price shocks, government underwriting, or the need for reliability. All these will influence investment decisions, but the EIA believes it gives a greater insight for forecasting than LCOE or LCOS alone can provider.

The value-cost ratio for new resources (weighted and unweighted) is shown in the following figures. 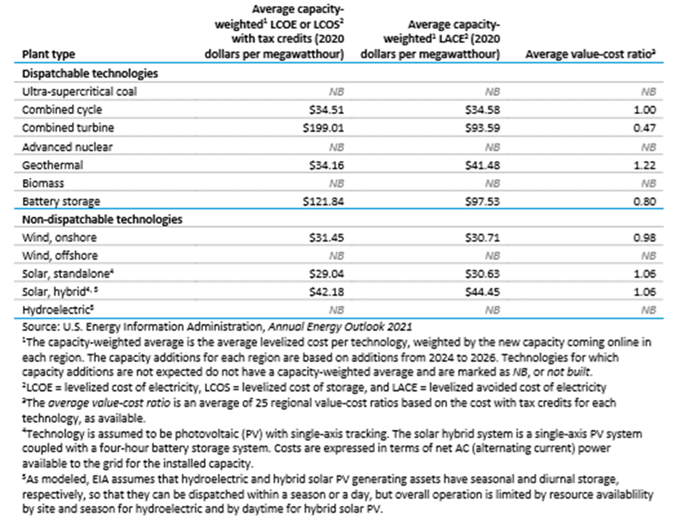 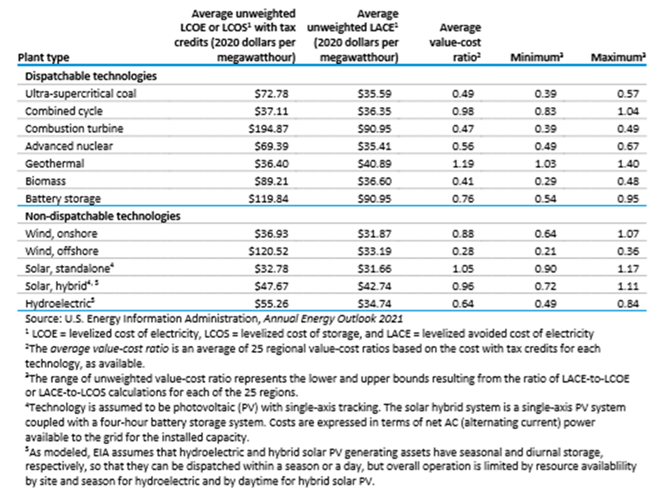 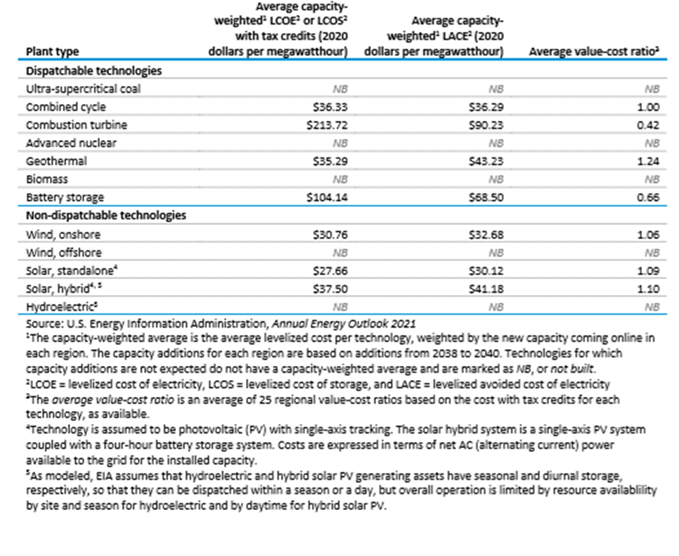 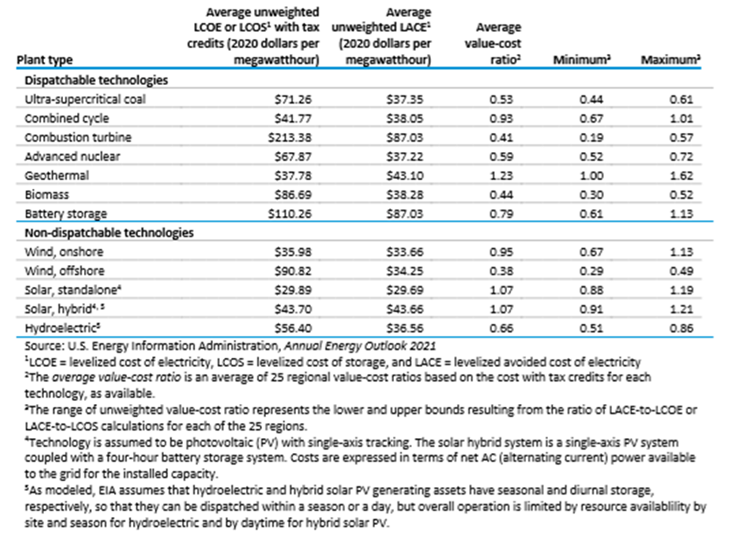 Overall, the EIA expects revenues from electricity generated from both natural gas-fired combined-cycle units and solar PV to be generally greater than, or equal to, their respective projected costs across most of the electricity market regions.

Its annual energy outlook forecasts that generating capacity could increase by 52-84 per cent by 2050, with the majority of the new capacity expected to come renewables. Solar in particular is tipped to lead the way rather than wind as shown in Figure 5.

The value of wind approaches its cost in several regions, and where this is the case new capacity can be expected to be developed. This will primarily occur ahead of the expected phaseout of the production tax credit (PTC).

The PTC is a per-kilowatt hour (kWh) credit for electricity generated by eligible renewable sources. It was introduced in 1992 but has been extended and modified since then. At the end of December 2020, the US Congress extended the PTC for onshore wind at 60 per cent of the full credit amount, or $0.018/kWh ($18/MWh) until 31 December 2021. The PTC will be reduced to zero starting in 2022. There was also an extension through to 2025 for offshore wind investment tax credits.

It’s worth noting that while the overall generating capacity in this period could increase by two-thirds or more, actual net generation is expected to increase by only a third, which would reflect the expansion in renewables.

The business case for gas, based on the modelling, also leads to the EIA assessment that gas-fired generation will account for almost all of the 40 per cent of new increased capacity that does not come from renewables. The US has plentiful gas supplies and as noted recently by Australia’s former chief scientist Dr Alan Finkel, gas can play a role particularly as more renewables come into the system.

Of course, ultimate investment decisions will be affected by factors, such as policy shifts, that sit aside from a project’s value relative to its costs. This latest assessment is made on the basis of existing policies. Where the outlook for gas may be challenged is through President Biden’s aim to achieve a fully renewable grid by 2035 - although equally the politics of achieving that ambition still has a long way to run, particularly with a 50-50 Senate and potential for a filibuster.

If ultimately a much easier net zero target became the end game, there would continue to be a role for gas given the economic case and generation mix.