New report grapples with the economics of coal closures

The Australian Energy Market Operator (AEMO) engaged Aurora Energy Research to analyse its Integrated System Plan (ISP) with one strand (Part 2)[i] looking at the economics of coal closures in the National Electricity Market (NEM).

The potential for early closure of coal-fired power stations, given the current highly charged political sensitivity, was the one finding out of the four Aurora put forward that attracted most public attention[ii].

Based on its analysis Aurora came up with four findings:

AEMO assumed that plants will close at either their announced retirement dates, or a time based on the operational life of the plant – for black coal this is assumed to be 50 years in most cases, while for brown-coal power stations in Victoria, the retirement dates broadly align with the Victorian Government’s 17-year mine rehabilitation guarantee. Overall, 15,000 MW of coal-fired generation is expected to reach the end of its technical life by 2040. 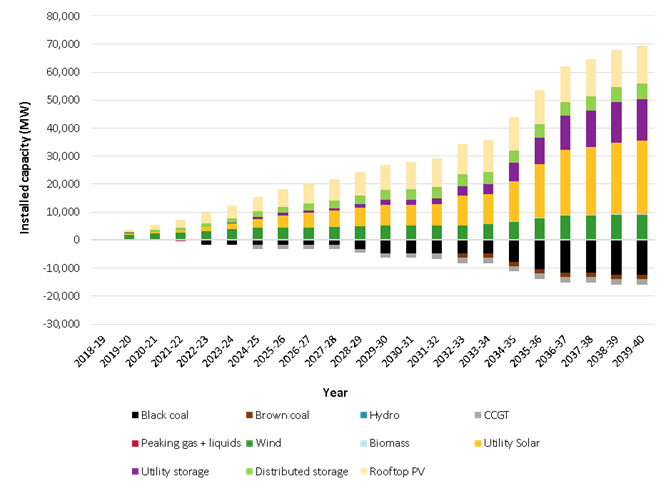 The modelling suggests that each plant generates a positive Net Present Value (NPV) over its forecast life under the ISP neutral scenario. It notes that under this finding coal plant owners would be likely to continue to run their plants for as long as AEMO’s ISP assumes, unless there is a major policy shift at state or federal level or future market outcomes deviate significantly from the assumptions in the ISP (such as a shift in the coal price) or a plant experiences a major failure.

Aurora notes that there is significant variability in the remaining profitability of coal plants in the NEM based on their different cost structures, technical capabilities and position in the merit order as well as the amount of time they are assumed to stay in operation.

“Aurora modelling indicates significant changes to the operation of coal plants on the NEM will unfold through the 2020s as a significant amount of renewables comes into the NEM, Aurora expects that coal and other dispatchable plants will be asked to ramp up and down around the lower marginal cost renewable generation profile. This ramping will put more pressure on coal plant costs, given they are typically designed to run more constantly, or as baseload.

Other factors it notes could accelerate coal closure include:

Some plants are more vulnerable to early closure and Aurora’s modelling indicates that there is significant variability in the economics of coal plants on the system – with factors such as coal costs and quality, age and efficiency of the plant, timing and cost of refurbishment. It notes that the major factor driving the profitability is increased competition from renewables and increased interconnection, which erodes load factors for coal plants, as well as average wholesale prices.

Unsurprisingly, Aurora found that if one coal asset were to leave the NEM before AEMO’s coal closure timelines it would have a positive impact on the economics of remaining coal-fired generators. A reduction in the availability of a dispatchable plant will push up wholesale prices, as seen with the closure of the Hazelwood power station as the NEM is designed to signal the need for investment in more firm plant.

It can be reflected that this, reasonable, observation is potentially contradictory to the observations made in the Aurora’s Part 1 analysis which considered the “benefits of interconnection”. That also cited that greater interconnection would lead to more competition, coming to the view that it would lower wholesale prices to such an extent that it more than offset the cost of the new transmission assets for customers. However, this Part 2 explores the second round effect: lower prices would lead to some plants exiting, causing the price to rebound, and so the dip in prices would only be temporary.

In its third finding, Aurora pointed to lower demand in particular as a significant threat to coal asset returns. It has put together six scenarios that could be triggers for coal plant owners to reassess closure dates. 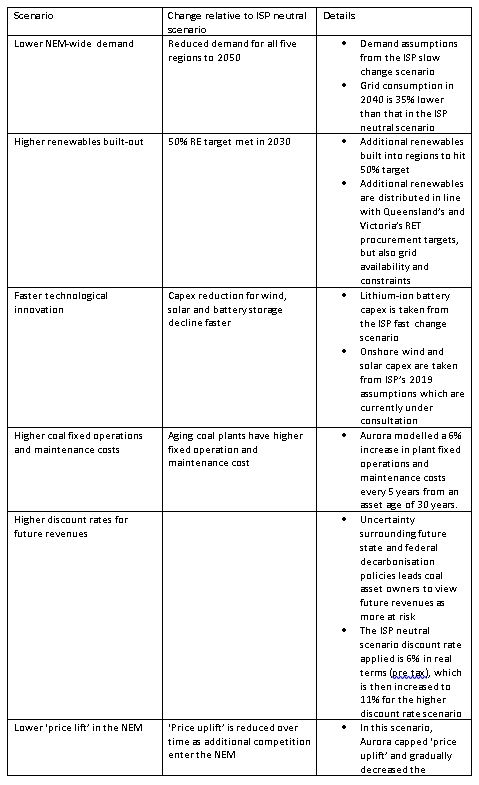 Each of these scenarios would be expected to put pressure on coal asset returns with lower NEM-wide demand significantly eroding values for available coal plants (see figure 3). It argues this could potentially lead to the early exit of Stanwell by the mid-to-late 2020s and other plants in NSW and Queensland could be affected and exit relatively earlier in the 2030s. 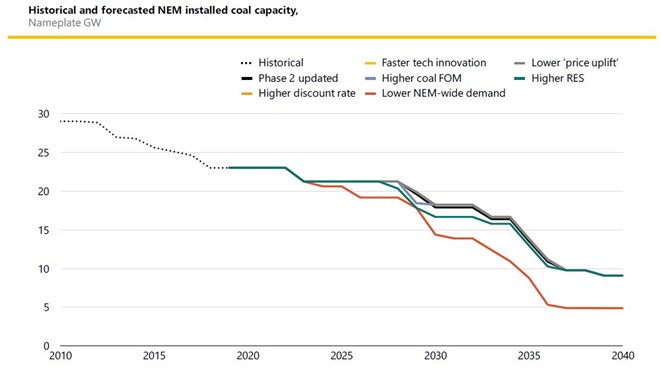 It notes that it remains profitable to keep Victoria’s online because of their relatively low marginal cost although they would have significantly lower NPVs. Aurora believes the only scenario that could potentially trigger the early exit in Victoria is higher renewables build.

“Lower NEM-wide demand does have a pronounced downward impact on almost all coal assets, although the quantum of the impact varies significantly by asset. As an example, when demand is held lower, all coal plants running see their revenue reduced due to lower prices.”

More expensive plants are impacted more than others and a plant that operates to 2040 would be affected more than a plant leaving by the 2030s.

If one coal asset were to exit the NEM before the expected neutral scenario timeline, it would be expected to have a positive impact on the remaining coal-fired generators.

This is because it would obviously lead to less competition from other coal assets and higher marginal cost technologies would be expected to set prices in the wholesale market more frequently. This was seen in SA where the closure of the Northern power plant saw higher prices gas generation setting the prices for South Australia.

To reinforce this point Aurora states that it modelled a scenario under which Yallourn Power Station in the Latrobe Valley closed earlier than expected (2025, which is around 8 years ahead of its expected closure date) with the remaining coal plants on average making higher returns as the market signals the need for new plant.

The analysis of AEMO’s ISP represents a prudent risk management step to try and better understand the potential to for adequacy of supply challenges to occur in the short-run and hence those that could affect system operation into the future. While the media has latched on to the worst case scenario of early coal plant closures[v], the analysis is not stating that this will occur, but simply outlining a number of scenarios that could influence decisions. As noted by Aurora, coal asset owners face a variety of challenges and decisions when determining future operations of their plants. it was engaged to offer some additional insight and could equally have produced a number of scenarios that could influence coal plants to remain in operation for than currently forecast.

[iv] Compared to the Neutral case, this scenario assumed: