Australia is not alone in finding the best way to meet its carbon reduction ambitions – Germany also continues to face challenges and with its election out of the way one of the tasks for the new administration will be to assess what steps will be required if it is to actually achieve its carbon reduction target of 40 per cent by 2020.

A recent assessment by energy think tank Agora Energiewende[i] has concluded that on current trajectories, Germany’s carbon emission reductions by 2020 will be 30-31 per cent compared to 1990 -  well short of the 40 per cent objective. 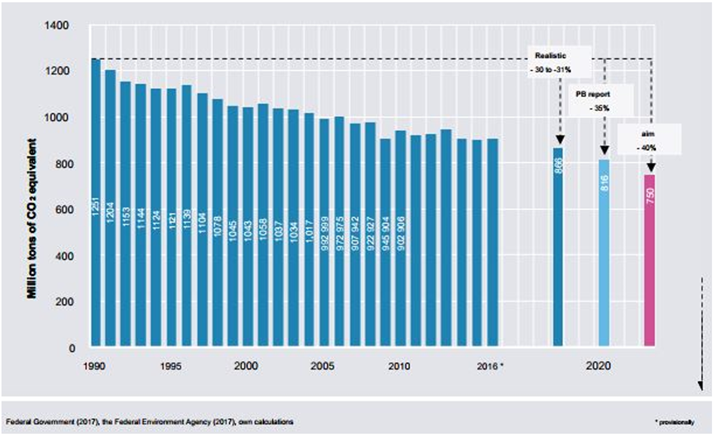 In its assessment, Agora Energiewende expects coal, oil and gas consumption, both in industry and households, to be up with correspondingly higher carbon emissions than previously forecast without other measures being introduced.

To get back on track with climate targets, Agora is calling for the new German Government to adopt an emergency "Climate Protection 2020" programme as soon as possible after the federal elections, which were held on 24 September. And an expert panel – the Advisory Council on the Environment – has now called for the phasing out of coal-fired plants and has just released  a three-step proposal to gradually achieve that. Coal-fired power plants have again come into the frame following the poll which has left Chancellor Angela Merkel needing to enter a coalition to form government.

According to Agora Energiewende factors for the slowing reduction in carbon emissions are increased economic and population growth, as well as lower carbon prices and lower oil prices.

All sectors are forecast to be higher than previously thought, while Agora Energiewende also points to the burning of coal to meet electricity demand[ii].  In particular electricity exports to other EU countries are expected by Agora Energiewende to remain at around 50 TWh and not fall to 40 TWh as modelled by the German government in its projection report.  Agora expects coal to be a contributor to supplying the additional 10TWh of electricity.  Figure 2 shows the projections of increased emissions as a result.

Figure 2: Estimates of realistic development of greenhouse gas emissions by 2020 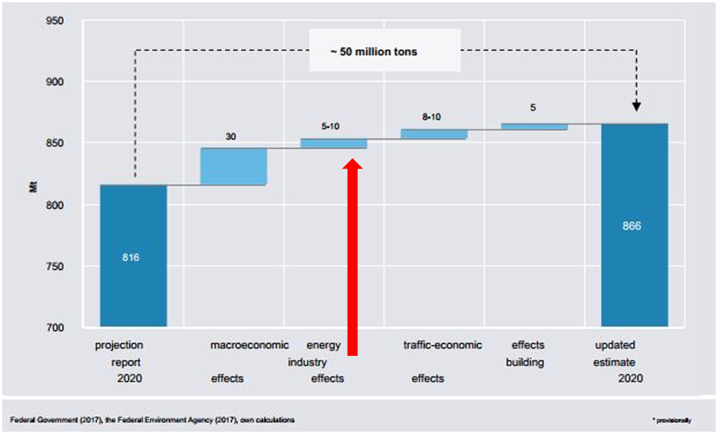 While Germany has installed additional renewable generation over the most recent years generation from coal-fired plants, while declining, has not shifted dramatically (seen in Figure 1).  The finger is pointed at low prices for carbon allowances under the European Emissions Trading System which has not reduced coal’s economic competitiveness as much as expected[iv].  At the same time weather conditions have played a part.

While Germany introduced additional solar and wind capacity in 2016 – output was down due to weather patterns (see Figure 4), for example. 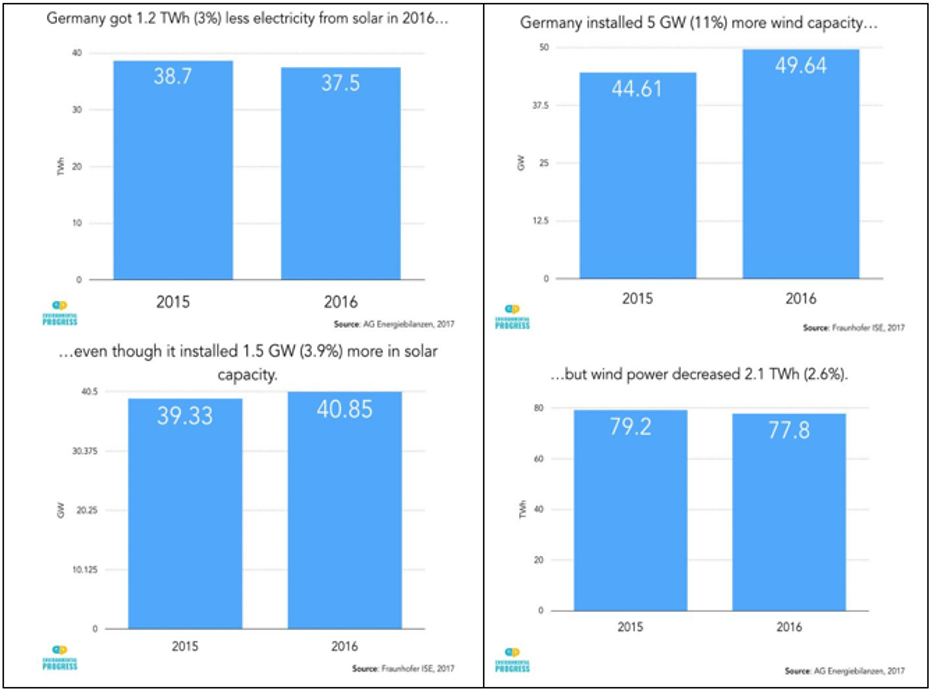 The electricity generation sector in Germany has been a significant contributor to the country’s carbon reductions to date with its emissions down 27.6 per cent on 1990 to 343 MT CO2 e[v].

An environmental advisory council to the German Government has urged the incoming government to start phasing out coal-fired power plants.[vi]

"Germany must immediately reduce the coal it burns for power, and stop it completely in the medium term," Claudia Kemfert, a member of the advisory council, said. "The last coal-fired power plant has to be shut down in 20 years at the latest."[vii]

That will depend on the shape of the next government formed under Angela Merkel's leadership. Her conservative Christian Democratic Union (CDU) is currently in coalition talks with the Greens and the Free Democratic Party (FDP) to form what has been dubbed a “Jamaica” alliance (the tag comes from the colours of the parties, which reflects those of the Caribbean nation’s flag) and it remains to be seen if the coalition agreement would consider the coal question[viii].

While the Greens would support the phase out of coal plants, the pro-business FDP insists Germany will need to continue burning fossil fuels for the foreseeable future, according to Deutsche Welle, Germany’s international broadcaster.  And Germany’s previous Energy Minister, Sigmar Gabriel, has said it is unlikely that Germany’s last lignite power plants would go offline before the 2040s[ix].

Energy-intensive industry opposes a rapid phase-out because it is concerned this will push up costs and undermine international competitiveness. Perhaps in consideration of the political dilemma, the environmental advisory council has put forward a three-phase plan to gradually move away from coal power stations.

First, the oldest, most inefficient plants should be closed by 2020, which the study says would give Germany a chance of meeting its 2020 climate targets. Remaining coal power stations would be kept online with decreased production, as a back-up to guarantee a stable electricity supply. Those plants would then be shut down one by one until the last is closed by 2030.

All of this tells us that Australia is not alone in facing the question of how best to manage its coal-fired plants and how they fit into the frame of a decarbonising economy and national commitments to reduce emissions. Germany’s management of the shift will continue to be watched with interest.

[iii] AGEB is an energy market research group set up by several major German energy industry associations and economic research institutes. Its purpose is to evaluate current statistics in all areas of the energy market and to publish their results. Once a year, it publishes a report on the overall state of the German energy market. It also monitors the development of the Energiewende.

The IEA's World Energy Outlook 2021 report is a crystal ball look at emerging trends and their potential impact on how energy systems evolve. While most of the focus is on the total share of energy markets by generation and fuel type, the report also carries insights into emerging energy security risks as the world moves to lower emissions grids - which it notes could be on a “bumpy” road.

The Federal Cabinet recently met to consider the Government’s plan for a net zero emissions by 2050 target. This has proved challenging for the Coalition partners. The push for stronger interim targets has emerged in the lead up to the Glasgow Climate Summit and has been reinforced by other countries increasing their commitments. We look at some of the targets that have been set both domestically and internationally.

Oct 14 2021
Read Analysis
GET IN TOUCH
Do you have a question or comment for AEC?