Consistent with the ESB, KPMG Economics anticipates that the NEG and other recent energy reforms (gas, retailer) are likely (KPMG’s emphasis) to assist in moderating wholesale electricity price increases in future.

It believes that the requirement for existing plants to provide three years’ advance notice of closure and the obligation for retailers to contract with dispatchable generation means that volatility in the NEM should be curtailed compared to recent events.

The report points to the NEG placing the onus on the retailer to establish a portfolio of electricity generation, either owned or contracted, that balances cost, emissions and “dispatchability”.  It notes that the capital costs per KW of electricity has been declining in real terms and expects the cost curve (shown in Figure 1) will continue to shift inwards for renewable technologies, while recognising that gas will play an important role in firming up renewables. 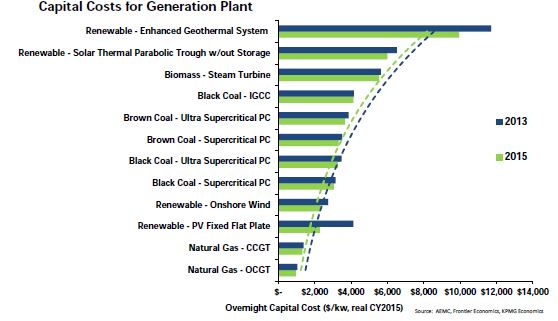 While it has not undertaken formal modelling, KPMG says that the NEG in conjunction with the other policy measures underway such as the Federal Government’s gas market changes, demand side management and reserve capacity, is expected to put downward pressure on energy costs, compared to business-as-usual.

KPMG’s expectations are shown in Table 1 below.

Table 1: KPMG assessment of impact of NEG and other reforms approved by COAG on cost stack 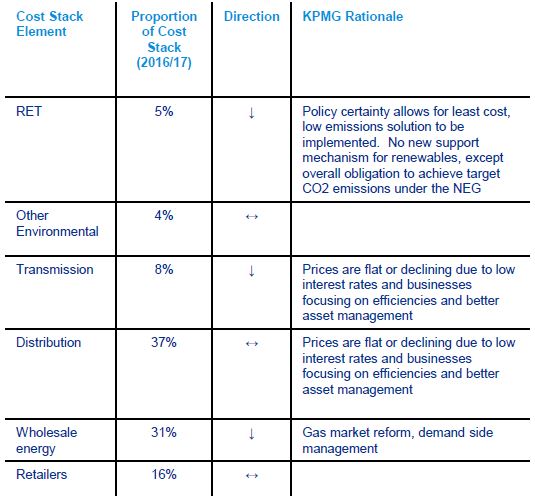 It believes the impact of the NEG on wholesale energy prices will depend on the relative strength of two off-setting factors:

With electricity price changes having the capacity to impact the size and structure of the Australian economy, KPMG has also undertaken simulations of potential repercussions for sectors of the economy if there is a 10 per cent increase in the cost of electricity generation. This is both considered in the short and long term.

In its short-run simulation KPMG reports that all headline macroeconomic aggregates are below levels without a price “shock”. GDP is projected to be around 0.24 per cent below the baseline level, which is equivalent to $4.2 billion per annum in 2017 dollars.

“The increase in domestic costs is particularly negative for the cost-sensitive export sector, which is projected to contract by about 0.31 per cent relative to the baseline. Household consumption is negatively impacted by the direct and indirect impacts of the rise in electricity generation costs,” the report states.

The indirect impact is on the goods and services bought by households as well as a reduction in income because of a fall in aggregate employment which they estimate to be around 26,000 jobs.

Aggregate imports contract by about 0.16 per cent, as slower domestic activity reduces demand for imports, which it considers would outweigh any reduced Australian competitiveness.

The expected short-run impacts are shown in Figures 2 and 3 below. 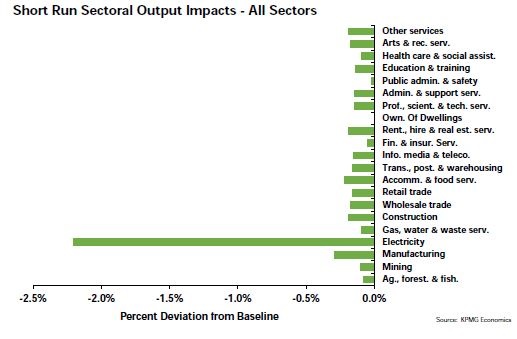 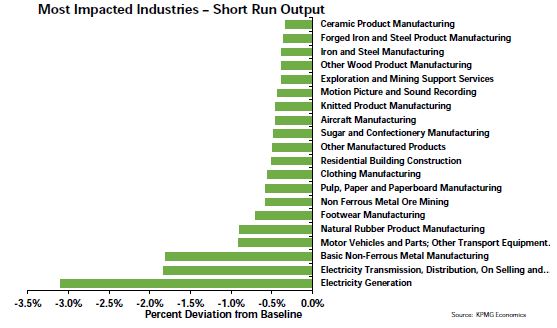 Perhaps unsurprisingly, electricity is expected to see the biggest contraction as households and businesses reduce their demand. Figure 3 goes into more detail on the impacts for various sectors and activities.

In the long run…

A 10 per cent increase in the cost of generating electricity would also mean negative impacts on the economy in the long run. KPMG projects that most sectors tend to reduce their stocks of fixed capital to restore rates of return to their long run equilibrium values. The overall reduction in GDP in the longer term is smaller compared to the short term impact.

Notable changes in the impacts between the long run and short run projections are: 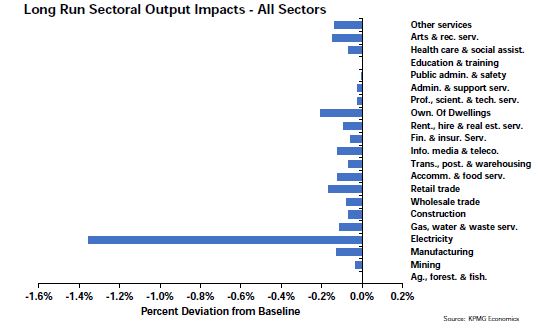 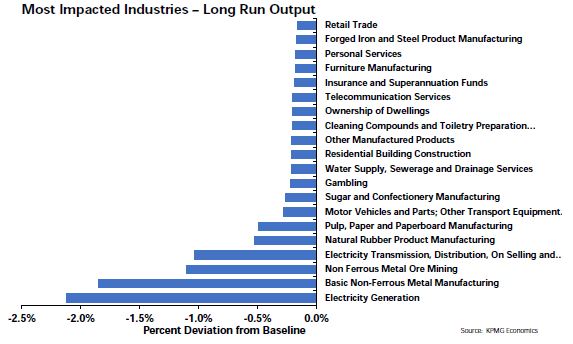 KPMG concludes its report that given the importance of electricity to economic activity and the structure of the economy: “Careful modelling of any policy response to the current circumstances facing Australia’s energy market is therefore vitally important to manage potential concerns of households and businesses regarding how any change to electricity prices will impact them”.