The headline issue at the recent COAG Energy Council meeting was the development of a National Energy Guarantee (NEG).  While the Council gave riding instructions to progress the NEG design, the new Energy Security Board (ESB) provided some of the first formal architecture of a design scheme, via a 50-page paper with supporting economic modelling of the impacts of the new arrangements.  Given most of the detailed design is ahead of us, what could they credibly model, and what insight can we glean from the architects of the NEG about how it will work?

Media and political discussion focussed on economic modelling conducted by Frontier Economics; which landed upon a remarkably precise $120 a year saving per household. More useful is the ESB’s qualitative discussion.  We look at both.

At its best, economic modelling is performed for the exercise itself: by playing with a model, a skilled economist can gain insights by observing how outputs vary with different inputs. This can test hypotheses and illustrate how a theoretical policy moves through a market. Economists know not to trust the output numbers themselves, but to use the exercise as one of the supporting thinking processes that leads to an ultimately subjective recommendation.

The Frontier modelling claims that the NEG can simultaneously improve all three competing parts of the energy trilemma: reliability, affordability and emissions. How is this possible?

It appears to mostly derive from the weighted average cost of capital (WACC) assumption on table 3.1 (see below). The NEG policy case uses a 3 per cent lower cost of capital for all new investments.  The Finkel report used a similar approach when modelling its preferred Clean Energy Target policy. 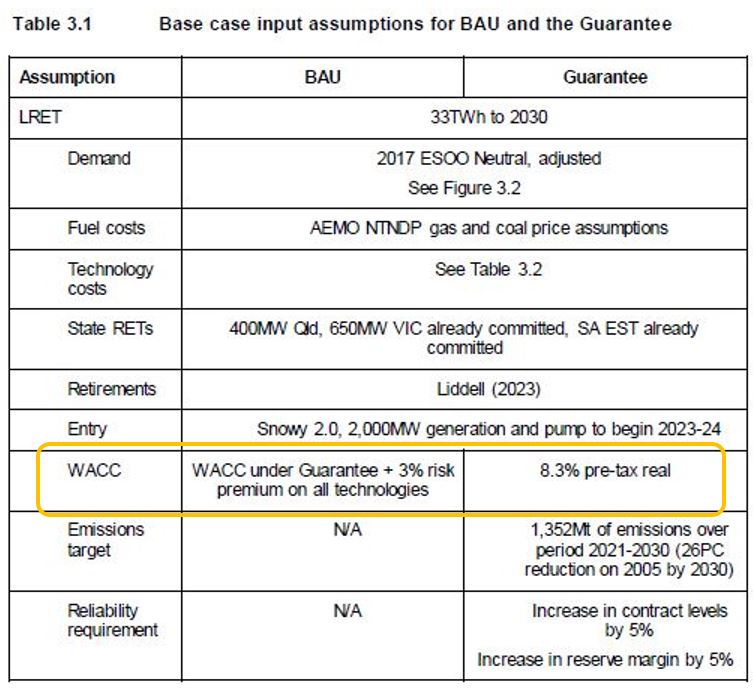 The reason for this reduced WACC is because it is claimed that having implemented the NEG, the policy uncertainty that dogs the industry will disappear. This is consistent with the broader thesis that policy stability will lower financing risk which can both increase investment and lower prices.

Nevertheless it needs to be recognised that the 3 per cent is an input assumption made by the modeller.  It is not an output. Indeed the modelling itself might be described as a sophisticated accounting exercise of the financial effects of this input judgement.

That is not to dismiss its other insights. The outputs also contain an interesting split of the future likely generation fuels. These appear to represent the most economically efficient way of getting to the emissions target given the technology input costs that were assumed. Rather than focus on these costs and resultant fuel shares, we should instead reflect on how the model seems to lead to the least cost way to achieve an emissions and reliability objective. This can be contrasted with, say, a technology-specific policy, or one that only subsidises new entry or prematurely forces closures. This suggests that of the many emissions schemes that have been proposed, the NEG would be one of the more efficient.

In reality, because the detailed design of the NEG is yet to be finalised, it is too early to perform meaningful quantitative analysis – there are simply too many design features that would have to be assumed by the modeller. Ironically, this modelling exercise was forced upon the Board by the same political contest that the NEG was intended to defuse. And, as expected, we now have parties performing rebuttal modelling of alternative policies[i].

How the NEG may form

More insightful than the modelling itself may be the ESB’s thinking on the NEG design in chapters 2, 4 and 5 of its Advice.

Section 2.3 describes how an efficient carbon reduction incentive on generators can actually emerge through a compliance obligation placed upon retailers. It also seems a bilateral emissions market could organically emerge, which removes the need to rely on one imposed by government. The ESB paper states: “Market customers that are unable to meet the required average emissions can contract with others that overachieve on their requirements.” and “The contract would then leave it up to the generator to operate its portfolio of generation units in such a way that the average emissions level is let.”

Chapter 4 provides a qualitative assessment of the NEG. It notes that “When contemplating the effective integration of energy and environmental policy, it is important to design a mechanism to achieve an emissions reduction objective which is consistent with energy policy objectives.”

It also comments that a mechanism should be designed in a way that minimises the costs of complying with the mechanism whilst achieving the mechanism’s desired policy objectives.

It suggests how the reliability mechanism could be implemented in a minimalist manner, by prohibiting retailers from intentionally “going short” (ie, having insufficient firm contracts to meet their summer peak load). The current market design already provides strong economic incentives in this regard, and retailers are generally well contracted. . Whilst a compliance obligation will have its burdens, it may not necessarily greatly change current business practice, whilst providing some comfort to observers that firm contracting is truly occurring.

The ESB appears to have moved away from its earlier advice[ii] (13 October) which raised the notion of centrally imposed operating requirements upon each dispatch period – which appeared to suggest moving plant operating decisions to the Australian Energy Market Operator[iii]. This recent advice suggests the Board’s thinking may have evolved.

Competition and the NEG

In the political discourse that followed the original 13 October announcement some stakeholders raised the prospect that the NEG risked increasing the market power of large firms, even if there was limited design detail to validate such claims.  Nevertheless this pressure has led the advice to include at chapter 6 a discussion of potential interventions in order to increase competition.

The chapter then suggests some prescriptive rules that could limit market shares. Such arrangements typically prove much more challenging to implement than they initially appear, and their inflexibility can produce anomalous outcomes.

It should not be forgotten that the industry is already subject to a well understood anti-trust framework through the Competition and Consumer Act, in particular its section 50 that constrains mergers. This framework requires all individual mergers, or even new contracts, be subject to a case-by-case assessment considering all the relevant circumstances. It takes into account the nature of the market, the existing level of competition, and the effects of the NEG policy if and when it is in place.

The ESB’s Advice is important in setting the context of the design of the NEG, particularly its descriptive chapters 2, 4 and 5 which provide the intent of the plan. The modelling is also valuable, for its insights and reflections rather than its numbers. Chapter 6 seems to be a diversion into unrelated competition matters, which appear to be the result of the political context in which it was created.

It is unrealistic to believe that a specific policy, yet to be significantly developed, will provide a precise modelled outcome. So the devil will be in the detail. Ultimately a decision on the NEG will be, and should be, a judgement call. And the qualitative discussion provides some hope that the policy, if designed and implemented carefully, may deliver its emissions and reliability objectives while supporting a smooth transition for the industry.