Market redesign proposals, are they missing something?

A new paper on the National Electricity Market (NEM) flags the need for the introduction of “missing markets” to address urgent real-time power system security issues arising from a dramatic “rate of change problem” in the NEM.

The paper, by Prof Paul Simshauser and A/Prof Joel Gilmore, of Griffith University, reviews investment and market performance over the life of the NEM. The authors argue that the current push for fundamental market redesign is a distraction. Instead of addressing critical emerging issues such as system strength, connection delays, and system resilience, there has been a swag of market redesign proposals focussing on future investment and resource adequacy.

The paper finds the NEM has achieved what it was designed to do, and no evidence that an alternative market design that might have improved outcomes to date, which includes proposals for nodal pricing, capacity markets and day-ahead markets. Conversely, while these designs are well proven in some jurisdictions, the paper cautions that changing the market design “mid-stream” will impact $52.6 billion of generation commitments, freeze merchant generation plant investment, frustrate each and every retail and wholesale contract spanning the event, and, will almost certainly induce liquidity events in an already complex refinancing task” (see figure 1). 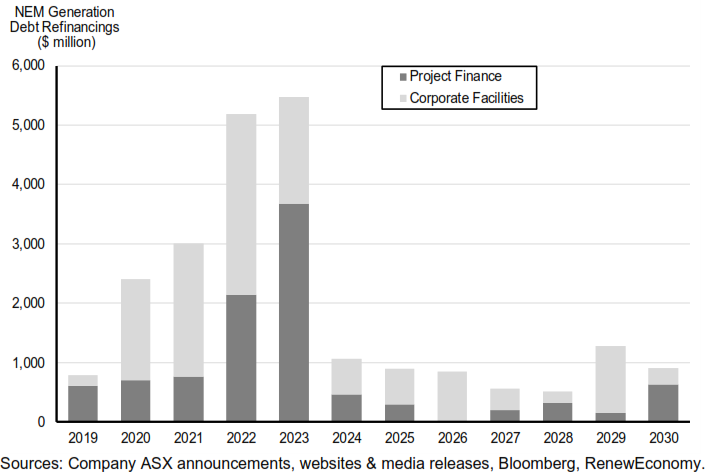 The paper notes there was an “awkward investment megacycle” in the NEM between 2017 and 2020.  The 2017-2020 cycle was not normal – it was driven by a range of factors such as unforecasted coal plant exits, rising gas prices, and an undersupplied and rapidly closing window to meet the Federal Government Renewable Energy Target. The challenge of meeting the RET was exacerbated by the stop-start approach between 2011-2015 with shifts in the target which, when finally settled, resulted in a shortened period in which to meet the 2020 target. As a result, Renewable Energy Certificate prices spiked, while, at the same time, renewable technology costs fell. These last factors led to “gold rush” conditions. The biggest driver of the NEM’s investment megacycle was this discontinuity around the RET, according to the paper.

The scale of the megacycle is highlighted by the fact that in the NEM’s 23 year history a total of $52.6 billion was invested in 206 utility-scale plants totalling 28,147MW of coal, gas and renewables yet virtually half of the total capacity (42 per cent) with an aggregate value of $21.5 billion and comprising 105 projects (including 63 utility-scale solar and 32 wind) occurred between 2017 and 2020. This is highlighted in Figure 2 and Table 1 below. 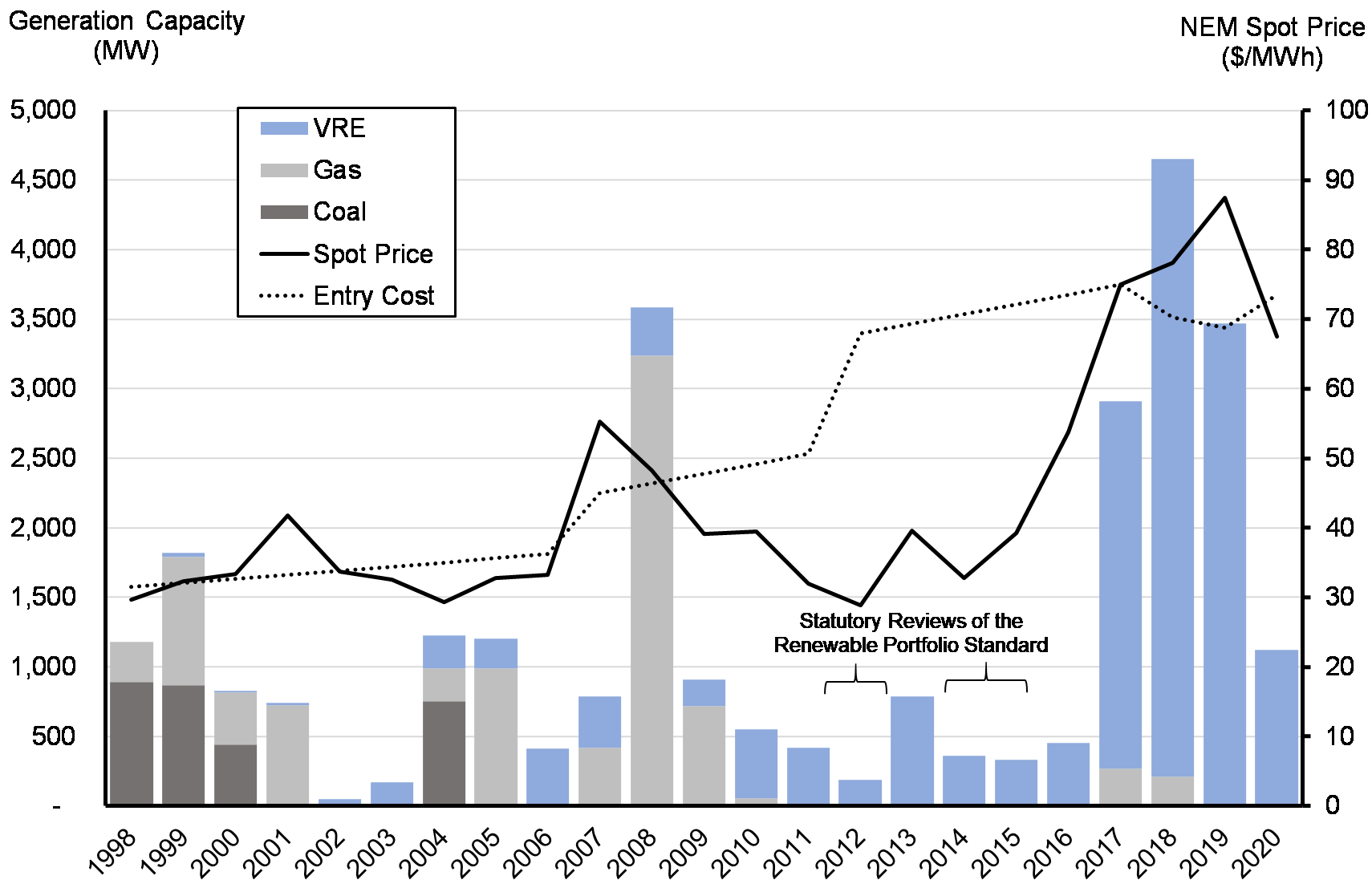 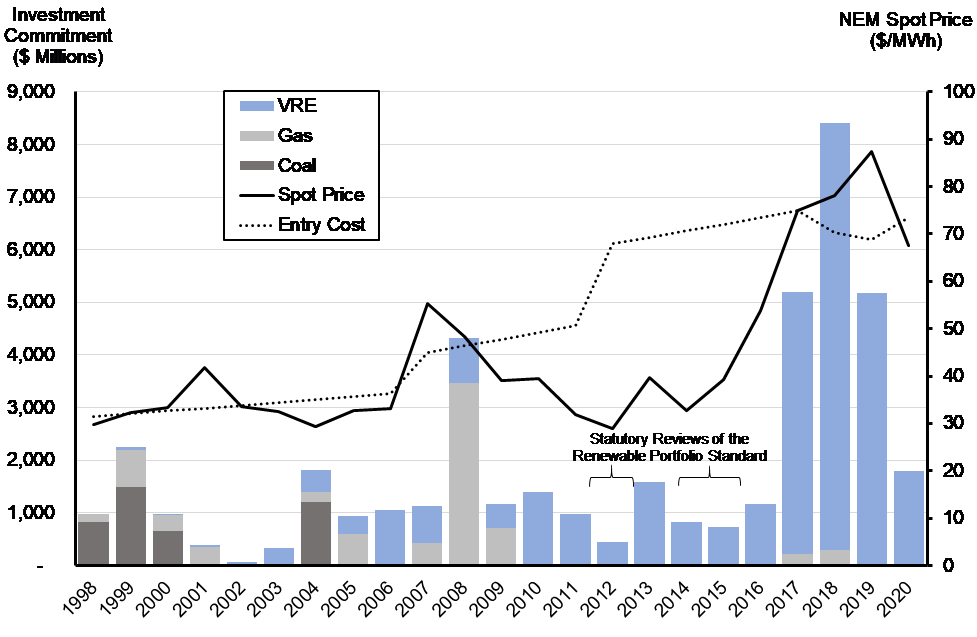 Table 1: Investment in the NEM

What was also unusual about the 2017-2020 cycle was the sources and pattern of investment, according to the paper. Traditional utilities accounted for just 15 per cent of direct renewable investment and only 58 per cent of underwriting via power purchase agreements (PPAs). The balance of investment came from developers (48 per cent), superannuation and pension funds (36 per cent) with around 20 per cent of renewable developments being spot price exposed (due to very high spot prices and falling renewable entry costs).

Between 1998-2016, an average of 5.3 power projects a year were added to the NEM – for the following three years project connections jumped 602 per cent with 32 projects each year.

The notable underperformer was dispatchable capacity with only 600MW of gas and 210MW of battery storage commissioned with most of it in SA. The paper does not immediately identify this as a problem - forward $300 caps contracts trended downwards to below an estimated $14.50/MWh for new entrant open cycle gas turbine plant, while no breaches of the reliability standard were being flagged by AEMO (with the exception of 2019 based on potential delayed return to service of two plants in Victoria – Mortlake and Loy Yang A).

However, the paper argues any under-representation of investment in dispatchable capacity is a policy choice, rather than a market design issue. The paper notes that while all the NEM’s utilities had advanced gas-fired generation projects they have been understandably hesitant to commit. In 2017 the ACCC flagged an informal 20 percent regional generation market share threshold and desire for non-integrated new entrant generators in NSW, Victoria and South Australia and subsequently the Federal Government launched its underwriting scheme for new dispatchable capacity and the proposed Snowy Hydro 2000MW of pumped storage hydro. The Federal Government also introduced its so-called “Big Stick” legislation.

The paper acknowledges a tremendous field of literature on whether energy-only markets provide sufficient return to dispatchable peaking plants in order to deliver community reliability expectations: the oft-stated “missing money” issue which usually leads them to recommend ways of providing additional reward to capacity, even if on standby. Experts frequently fear that energy-only markets will have serious problems in the presence of:

The NEM has plenty of these challenges, but the authors note a paradox that the NEM still produces a consistent stream of investments and generally good reliability. It cites a tight nexus between its very high Market Price Cap of $14,700/MWh and the NEM’s 99.998% Reliability Standard, along with participant risk aversion and financial innovation.

It also notes the that real-time energy-only markets have some attractions compared to their alternatives in the presence of high shares of renewable energy, particularly the very sharp price signal that rewards performance according to actual observation rather than estimation.

The doubts expressed above about energy-only markets have parallels to that of Great Britain, which in 2015 responded by fundamentally changing its design to a capacity market. The authors posit that the NEM is not devoid of Great Britain’s political problems, but unlike Great Britain, the NEM has benefited from 23 years of market design stability which has itself provided a good platform for investment. Thus, contrary to much of the current commentary, continued stability in market design may in fact be the best way to support resource adequacy.

Other implications of transition

The speed of entry and rate of change to the NEM did see a deterioration in the NEM’s security of supply with the rapid entry of renewables and reduction in primary frequency response from traditional generators. To be clear, security refers to the grid’s stability with respect to managing electrical engineering matters such as frequency and system strength, and should not be confused with reliability or resource adequacy.

While AEMO is now being forced to intervene in the NEM on an almost daily basis to maintain security, this more reflects missing markets rather than a market failure, and in any case, the dominant cause of these interventions will soon be resolved with the installation of synchronous condensers.

An offshoot has been an increase in FCAS market prices and these have triggered a supply-side response with battery storage investments coming into the market, which is an intended and positive outcome, but there is currently no market for many other necessary services, such as FCAS fast frequency response, system strength and voltage control.

As a result there was a visible deterioration in power system frequency, failing system strength and a jump in Australian Energy Market Operator (AEMO) interventions. Resolving these issues does not require market redesign such as the introduction of a day-ahead markets but rather “urgent” establishment of missing markets.

The central problems then, and identified in the paper, are power system security, power system strength and FCAS market service coverage which the authors argue need to be resolved urgently. These are illustrated by figures 3-5 below. 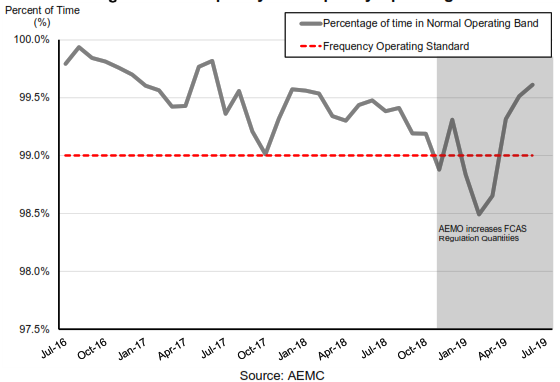 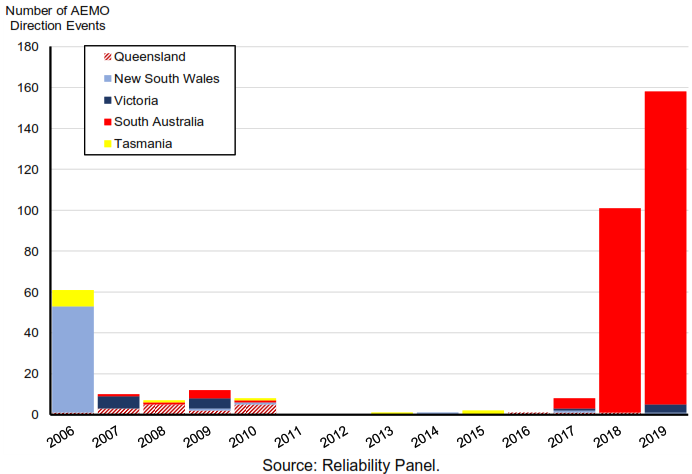 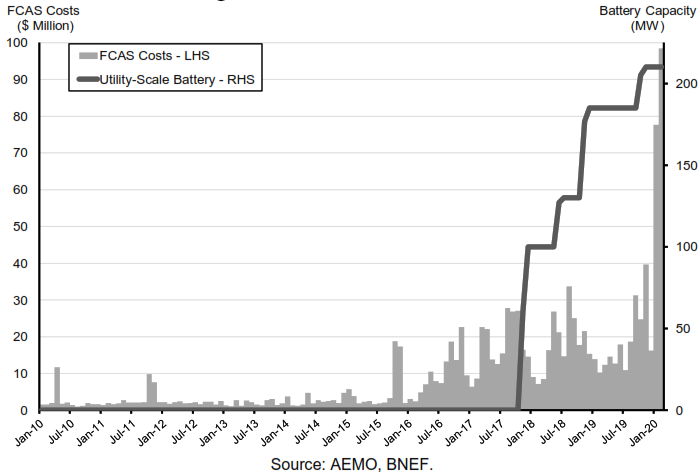 The paper argues that fundamental policy shifts or market redesigns involve mass disruption and will create new and unexpected problems, while creating significant transaction costs. The transition period will mean that contracts will have to straddle two completely different market environments and will likely lead to a merchant investment freeze.

It notes that policymakers have decided to conduct a ‘post-2025 market design program’ and commit to the design at the end of the year just as a major refinancing task (shown in Figure 1 above) gets underway. Between now and 2025 this will involve 84 per cent of renewable project debt and 74 per cent of corporate debt totalling $17.9 billion.  “Any fundamental change is likely to be highly problematic and almost certainly create a string of liquidity events.”

It argues that market re-design proposals including a shift from zonal to nodal pricing as proposed by the AEMC, and to day-ahead markets as proposed by AEMO “remain intriguing but are a distraction”.