Electricity customers in the Canadian province of Ontario have been subject to large price rises in recent years as its government enthusiastically committed customers’ money to a range of new energy infrastructure projects, including wind, solar and other renewables, as well as a smart meter rollout. Have the good folk of Ontario got good value for their money? Not according to the province’s auditor general (AG), whose review of energy policy decisions is scathing to say the least.

Around a decade ago, a number of critical policy decisions were made that set the province on the path of higher cost electricity. The provincial government decided to phase out the state’s coal plants (that it owned), which at the time provided a quarter of Ontario’s electricity, with the balance being largely made up of zero emissions plants such as hydro and nuclear. In its place, it targeted new renewables, including converting some of the coal plant to biomass, plus wind and solar, as well as some gas plants for flexibility. The changing mix is illustrated below: 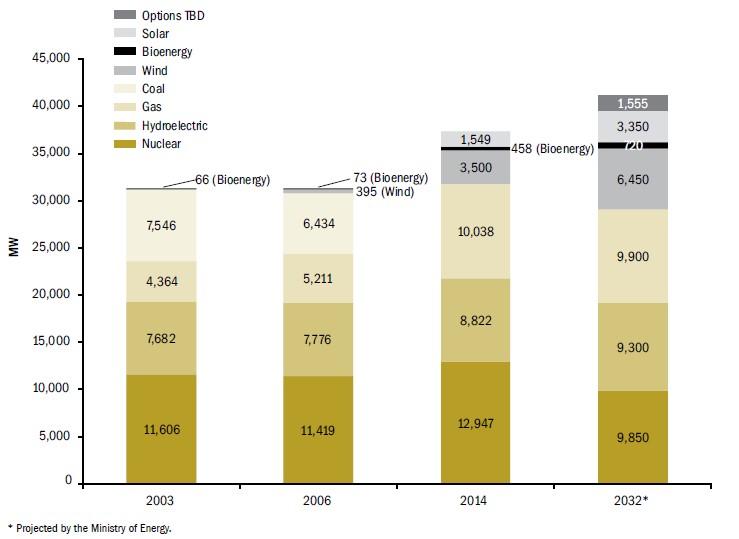 Source: 2015 Annual Report of the Office of the Auditor General of Ontario, 2015

The basic goal of reducing power sector emissions was entirely laudable, but not the inefficient way in which the government did so.

Critically, government intervention has made the transition far more expensive than it needed to be. As governments often do, it tried to satisfy multiple policy goals. One of the key mistakes was a decision to use a fixed price feed-in-tariff (FiT) approach instead of competitive tendering at a time when wind/solar prices were rapidly declining. The fixed price FiTs were actually higher than those offered under a previous program. The goal was “to create more clean energy jobs and attract investment to Ontario in the midst of a global recession”[ii]. The AG calculates that electricity consumers have had to pay $9.2 billion more for renewables over the 20-year contract terms under the Ministry’s current guaranteed-price renewable program than they would have paid under the previous program[iii]. They found that the prices under Ontario’s guaranteed-price renewable program were still double the market price for wind and three and a half times the market price for solar energy in 2014.

Another costly intervention was the government’s frequent overrule of the Ontario Power Authority (OPA), the supposedly independent agency that was charged with ensuring adequate but efficient investment in power generation. The Ministry’s directions to the OPA include to:

The push to invest in new generation also conflicted inefficiently with other policies to conserve energy. Ontario has spent approximately $2.3 billion in conservation programs and initiatives from 2006 to 2014. The AG notes that “system costs could be more effectively reduced by a decrease in peak consumption paired with an increase in off-peak consumption, which would flatten the overall load. However, overall, the conservation program has been more successful in achieving its electricity consumption targets than its peak demand targets”[viii]. Smart meters were rolled out to help with driving peak demand shifting and other beneficial behaviours, but a separate report by the AG noted that the rollout was expensive ($1.9 billion, including $249 million on a provincial data centre that was not used by the retail/distribution businesses who relied on their own systems), had not been supported by a proper cost-benefit analysis and the time of use tariffs that were implemented were not sharp enough to drive behavioural change[ix].

While the excess power that results can be exported to neighbouring regions, the AG notes that the price received for exports is often below cost (over 2009-14, the gap was $3.1 billion). A further $339 million was expended compensating generators for curtailing generation. Finally, there remain other times when Ontario has to import power, at which times it pays more than the average export price.

The resulting escalating cost to consumers is shown in figure 2 below. While the market dispatch price (Hourly Ontario energy price) has fallen – due to excess generation and the introduction of zero marginal cost generation, the overall cost per KWh has almost doubled, due to the “Global Adjustment”- essentially the differential payments made to all forms of generation to top up the market revenue to meet the fixed price deals with the government. Note that the figures below exclude transmission, distribution and regulatory costs, which add about another 6c/KWh. 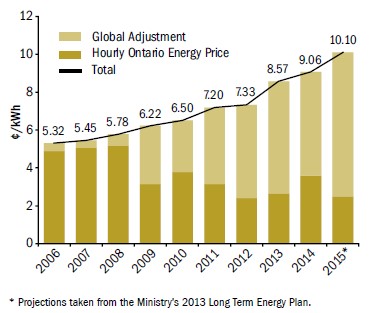 Source: 2015 Annual Report of the Office of the Auditor General of Ontario, 2015

Emissions have reduced as a result of the change in the generation mix, but the Ontario society of Professional Engineers cautions that further wind and solar would actually increase emissions, because they would displace zero emission baseload (nuclear/hydro), but require more gas generation for flexible back-up[xi].

The AG’s report emphasised the political, short-term nature of much of the decision making. A proper long-term resource plan had never been developed, consultation was poor or non-existent – in one case a detailed proposal was issued five days after the consultation date had closed.

When critics of market policies advocate for a return of the electricity market to government control, they assume that this will result in a perfectly rationally designed system to deliver lowest cost electricity while meeting reliability and emissions reduction criteria. The reality of government is frequently very different, as Ontario’s example shows (Exhibit B might be the US territory of Puerto Rico, which is essentially bankrupt, due largely to bad management of its publicly owned electricity system[xii]). Since the end of the premium FiTs for rooftop PV, Australia has largely avoided the pitfalls of fixed price contracts for new generation. But most of the rest of the tale is worryingly familiar, especially to Victorian electricity consumers: an expensive smart meter rollout with lack of follow up to get the benefits; a focus on other political goals like “jobs and investment” as opposed to targeting an efficient electricity system; poor or non-existent consultation; conflicting policy objectives of energy efficiency incentives alongside incentives for new generation.

As Dieter Helm, professor of energy policy at Oxford University, put it “When it comes to energy policy, politicians always think they know the answers – and leave consumers paying the price for years after they leave office. The lesson is painfully obvious: the energy mix should be the outcome of market processes, not the objective of government policy”[xiii].