Keeping the system safe: What are the options?

The transition to a low-carbon electricity system is throwing up a range of challenges, not least of which is maintaining secure power system operating conditions and finding the best ways to procure the new services that will be needed.

It is causing power system operators everywhere to re-assess and re-define secure operations given the dramatic change in generation technologies coming into the system.

A new paper[i] by the Australian Energy Council’s Ben Skinner, Pierluigi Mancarella and Maria Vrakopoulou, from Melbourne University, and Ian Hiskens from Michigan University, takes a closer look at the key challenges. It also outlines potential approaches to deal with them. Below we summarise the paper.

Conventional generation (hydro, coal, gas and nuclear) is characterised by large, discrete synchronous units. New technologies like wind, solar and energy storage and load control are more variable and distributed.  Furthermore, the characteristics of the power system are changing profoundly as synchronous generation is replaced by asynchronous power electronic converters.

This in turn is demanding new requirements for system stability, which need to be mapped into system operating rules, constraints and market requirements.

The Finkel Review (2017) had pointed to the relationship between inertia[ii] in the National Electricity Market (NEM) and the minimum amount of Primary Frequency Response (PFR) that would be needed to maintain the frequency within pre-defined operating parameters following reasonably typical disturbances, such as loss of a large conventional generating unit or discrete load, or an interconnector trips.

Figure 1: Relationship between minimum secure quantities of Inertia and PFR 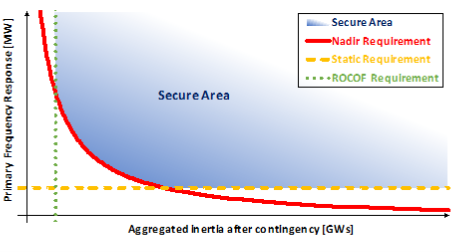 Low inertia leads to a higher Rate of Change of Frequency (RoCoF) following a disturbance, which in turn leads to a more severe and rapid shift in the minimum or maximum frequency which PFR services need to deal with to arrest the disturbance.

The increasing amount of electricity from asynchronous sources and retirement of traditional generators means traditional inertia is “dangerously” declining in power systems. Historically there has been an abundance of inertia and PFR because of the amount of synchronous generation in the grid.

Despite the influx of asynchronous generation, the authors do not see significant periods of dangerously high RoCoF in the immediate future in the mainland NEM jurisdictions, although the same is not true of WA’s Wholesale Electricity Market (WEM). In response the WEM is in the process of rolling out a competitively procured inertia service.

But the asynchronous plants can be turned from a liability into an asset: fast frequency response from them could assist security. Many new technologies from asynchronously connected large-scale renewables to distributed batteries and controlled loads, could assist in providing system services and allow wider market competition between old and new technologies. It will require a good understanding of the response characteristics of new technologies and for them to be taken into account to establish the secure operating parameters. This would allow competitive procurement mechanisms to be developed to ensure security is maintained at lowest cost.

The future is stochastic

The paper contends that the future grid will need to move away from reliance on a deterministic security assessment – this is where the power system operates with full assurance that it can withstand a predefined set of contingencies.

This becomes less relevant as power systems transition to many, small, diverse technologies with a large degree of variability and, as a result, the potential for large forecast uncertainty. That can range from the inability to accurately predict changes in power output, for example when the wind isn’t blowing or the sun isn’t shining, to the difficulty of capturing how price-responsive distributed systems (like rooftop solar) act given they might not be visible to the operator because it is behind the meter.

This increased stochasticity (variability or randomness) from increased levels of renewables and distributed technologies will need operational tools that are based on probabilistic assessments – such as using historical data or simulations to establish statistical distributions of forecasting errors and building them into new scheduling and dispatch models.

A probabilistic framework would allow the system to be operated with a pre-determined acceptable security level.

Engineers, familiar with the old deterministic rules of thumb are sometimes reluctant to embrace the complexity of probabilistic algorithms, however it is entirely feasible with the computer power we now have. If used in operational dispatch engines it offers a higher level of security for systems with significant levels of variable generation.

A further challenge for low-carbon systems comes from the dynamic behaviour of asynchronous technologies such as wind, solar and battery storage that link to the grid with inverters, known as converter interfaced generation technologies (CIGTs)

These are generally capable of providing “synthetic” inertia through controls that seek to mimic rotating mass inertial response. While they have the potential to provide grid support, including enhanced fast frequency response and voltage regulation, their dynamic response will differ from traditional synchronous generators in complex ways that need to be understood and analysed. And this is further complicated where the technical details of CIGTs might involve confidential proprietary information.

The paper also highlights that existing mechanisms for procuring security services from competitive market participants are mostly insufficient for increased levels of asynchronous and variable generators and it will be critical to obtain previously unspecified services, such as:

These can be provided to varying degrees by:

But these are not perfect substitutes for each other and are a mix of competitive and regulated assets, so selecting the most efficient source of supply is far from simple.

What are the options for market design?

Options to acquire system security services, suggested in the paper, are:

While option 1 is considered the most academically “pure” these markets would need to be subdivided into multiple categories to maximise participation. In frequency control, different technologies respond differently and if delivery obligations were made broad to minimize the number of services, some technologies that could play a small part might be excluded.  It could also lead to volatile returns that could be difficult for investors to anticipate.

Option 2 holds some promise, according to the paper. But centralised long-term contracts are likely to require the market operator to purchase more than the minimum safe level to protect against unavailability of some services. It would also require a complex and difficult judgement for the monopoly procurer.

In relation to PFR, the Australian Energy Market Operator (AEMO) prefers options 3 because it does not need to specify the volume of acquisition to deal with all reasonable disturbances. But this may not be an efficient approach as it could lead to:

There could also be difficulties with option 4 in performing large-scale optimization with a growing number of variables. There are different versions of this type of approach in various jurisdictions internationally and the performance of those markets should be critically investigated, the paper argues.

While complex, the paper concludes that there are reasons to be optimistic of dealing with the issues outlined. This is because it is possible to develop analytic techniques to identify the need for new services and clarify the opportunities for different providers; and some providers of the services, such as synchronous condensers and CIGT synthetic inertia and FFR may be relatively low-cost given the overall cost of the power system. Overall, it argues it may be appropriate to choose a type of procurement that prioritises simplicity over efficiency.

[ii] The ability of the system with rotating turbines to provide resistance and respond to changes in the system.