Is there really a nuclear option for Australia?

The nuclear energy option is again on the table in Australia following the announcement by Energy and Emissions Reduction Minister Angus Taylor of a parliamentary inquiry, requesting the Standing Committee on the Environment and Energy to investigate nuclear as a power source for Australia.  Committee chair Ted O’Brien (LNP) claims the inquiry will be the first into nuclear energy in more than a decade and is possibly the first time the Australian Parliament has ever undertaken an inquiry of this sort.

The commission handed down its final report in 2016.

The Howard Government also commissioned a landmark review led by Dr Ziggy Switkowski in 2006, when he was chairman of ANTSO, Australia's Nuclear Technology and Science Organisation.

The broad parameter of the new parliamentary inquiry is to “determine the circumstances under which future Coalition or Labor Governments might consider nuclear energy generation”.[i]  And given the government has also declared it has no plans to change the current moratorium on nuclear energy generation in Australia, it may be seen as a strategy to kick the can down the road for a future government.

Despite this, it’s worth re-examining the issues especially given technological advances in nuclear generation, the current debate in countries that do use nuclear energy like the UK and Japan as well as the changing views among key stakeholders here in Australia.

The rationale for the inquiry from Minister Taylor is in response to the long term need for low emission, affordable sources of base load generation.

“There's new emerging technologies whether it's, hydrogen, or lithium, or uranium that have the potential to solve that problem,” Mr Taylor told the ABC. “It would be irresponsible of the government not to consider through the Parliament those opportunities. We're doing a national hydrogen strategy and I've referred this nuclear issue to a parliamentary inquiry.

“They will look at the prerequisites necessary for nuclear – both economic, safety, as well as environmental and that will be the focus. It's timely to do it, given there's been significant changes in nuclear technologies in recent years, significant changes since the last inquiry was done over a decade ago.”

The Australian Energy Council, which is technology-neutral, believes it is important to rationally consider all technologies that may be required to address the challenge of supplying clean, affordable and reliable energy in the 21st Century. The AEC’s position has not changed since the findings of the SA Royal Commission into Nuclear Fuel Cycle were released in early 2016.  That Royal Commission had correctly identified that nuclear energy would not be commercially viable under the existing market conditions, but that it may be necessary as part of Australia’s energy system as we shift to a low greenhouse gas emissions future.

The tentative findings of the Royal Commission suggested it “would be wise to plan now to ensure that nuclear power would be available should it be required”.

The commercial viability of large nuclear energy has been a major factor impeding nuclear developments internationally and is more recently borne out by the current development and construction of the British Hinkley Point C nuclear generator being built in Somerset. The EDF Energy project is Britain’s first nuclear power plant in a generation and has already been characterised as the world’s most expensive power plant and a white elephant as economies increasingly transition to renewables[ii].

The Guardian reports that the £20bn [around AUD36 billion] Hinkley Point C will cost energy bill payers £92.50 (AUD 166) for every megawatt-hour of electricity it produces for 35 years - well above both the UK’s wholesale energy price of around £55 a megawatt-hour, and the new breed of offshore wind farms[iii].

The cost of developing nuclear power was recently considered in a industry super report which we previously assessed (Industry Super and Nuclear Power: Compare the Pair, EnergyInsider 4 July 2019).

Nuclear generation also remains under a cloud in Japan following the Fukushima disaster in 2011. The resulting safety standards imposed by the Japanese Nuclear Regulation Authority – safety upgrades estimated as almost equal to the cost of a new reactor itself – is crippling any return on investment for nuclear generators.  And this doesn’t take into account the capital outlay now required to allay local community concerns. Japan is now aiming for 20 per cent nuclear in its electricity mix by 2030, which is well down on the 30 per cent it was generating in 2011 and about half its ambitious targets prior to Fukushima. The first two of Japan’s reactors to restart were in August and October 2015 with a further seven having been restarted since.  A further 17 are said to be in the process of restarting[iv].

Despite these factors the International Atomic Energy Agency recently counted 55 reactors under construction (predominately in Russia, China and India) joining the 453 reactors currently in operation around the world.

A key voice in the renewed debate is Dr Ziggy Switkowski himself, who says the renewed interest in nuclear is appropriate given the technological changes in the space, particularly in small nuclear reactors, or small modular reactors (SMRs).

“There is no question that the renewable, solar and wind in particular, have become very cost-effective and the outlook for battery storage is promising,” Dr Switkowski told ABC’s AM program.  “But it is not with us yet and it may be some years away, and I think these small modular reactors - so reactors that hitherto have powered nuclear subs and icebreakers, about a tenth the size of a regular big power station - they look as if they will be widespread in their deployment in the 2020s.

“And it is the sort of design that produces baseline electricity and looks to be completely compatible with the needs of the Australian continent in the 2030s.”

The World Nuclear Association reports that there is an appetite to develop smaller reactors, which can be built independently or as modules in a larger complex, with capacity added incrementally (see tables below for WNA assessment of operating and reactors of this type that are under various stages of development). It defines the SMRs as generally 300MW or less. There are also moves to develop independent small units for remote sites. They are seen as a more manageable investment than large reactors “whose cost often rivals  the capitalization of the utilities concerned”.[v]

SMRs can more readily slot into brownfield sites in place of decommissioned coal-fired power plants, according to the WNA.

Late last year Canada released a roadmap on SMRs. It pointed to the following benefits of SMRs which are designed to be:

The Canadian assessment found that applications could include:

These potential applications are shown in figure 1 below: 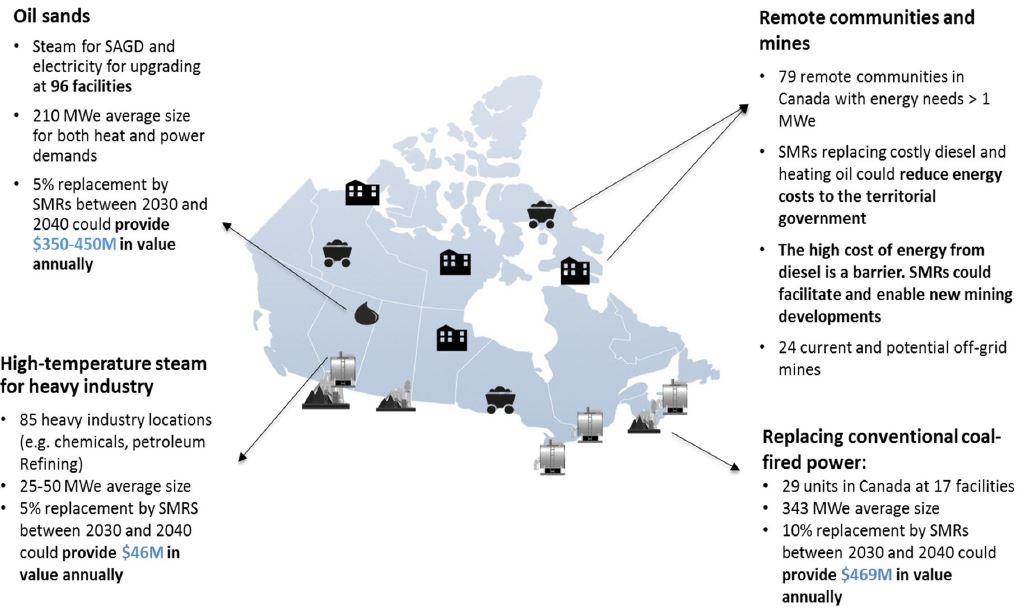 The Canadian SMRs roadmap steering committee[vi] also looked at the levelised cost of energy (LCoE) for SMRs and other technologies (see figures 2 and 3).

Figure 2: Comparison of LCoE from on-grid SMRs with other options*

Figure 3: Comparison of LCoE from on-grid SMRs with other options* 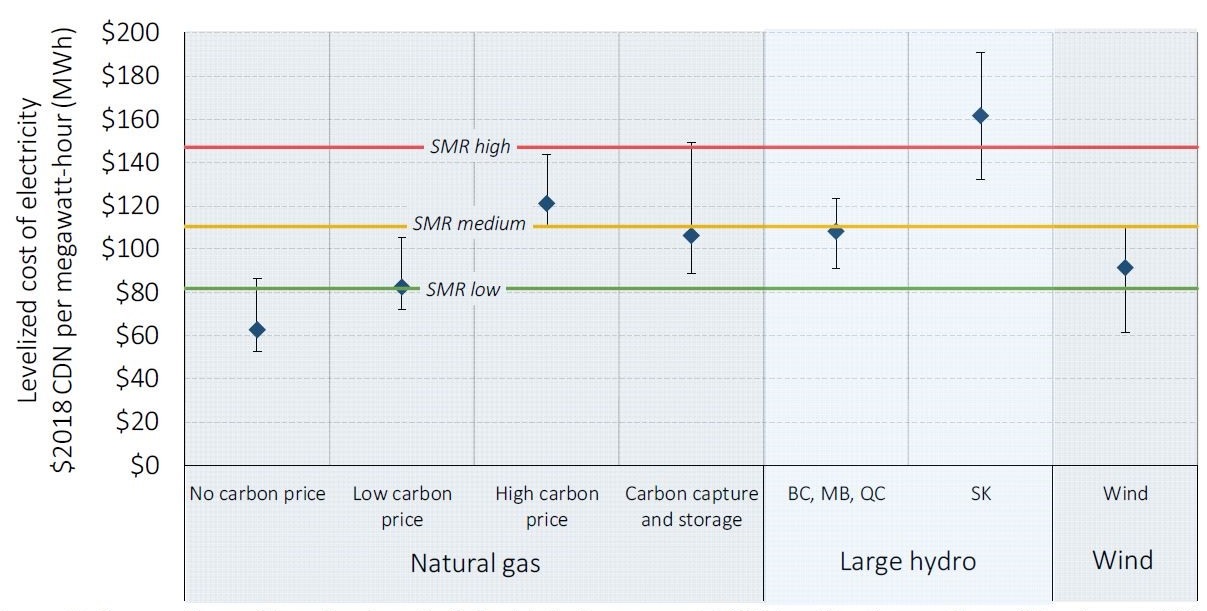 Whatever the results of the Standing Committee on the Environment and Energy inquiry, it is unlikely Australia will join the ranks of countries with nuclear energy anytime soon given the range of hurdles that would need to be overcome, not least of which would be public resistance.  A widely reported Essential poll in June found that 44 per cent of Australians support nuclear power plants, up four points since the question was last asked in November 2015, while 40 per cent oppose them.  But asked the NIMBY question, “would you be comfortable living close to a nuclear power plant”, 60 per cent said no compared to 28 per cent who had no issue.

The WNA Assessment of SMR developments, May 2019 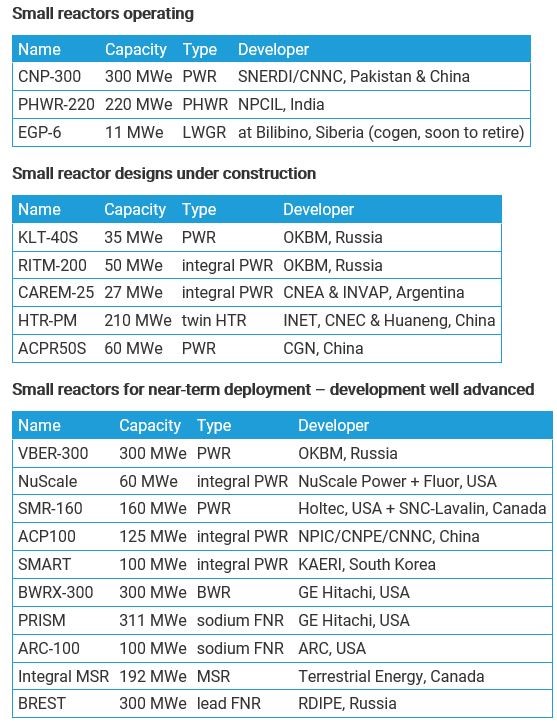 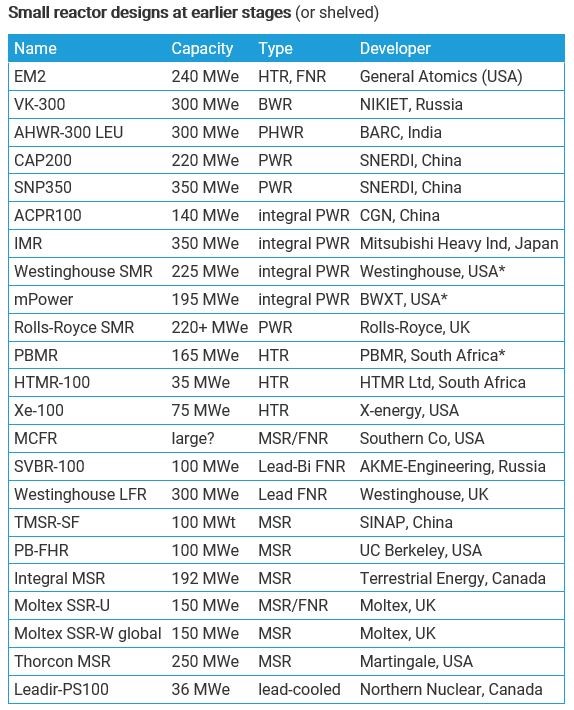 [i] Inquiry into whether nuclear generation is feasible and suitable for Australia, 2 August 2019

[ii] “Despite Hinkley the new plan for nuclear is hardly better than the old one”, The Guardian, 28 July 2019