Is there merit in a second Bass Strait Interconnector?

With record low rainfall and an extended fault in the Basslink interconnector the Tasmanian Liberal Government has again raised the possibility of building a second Bass Strait interconnector. However the way forward remains unclear.

A second interconnector would increase energy security, likely contribute to downward pressure on wholesale electricity prices and, as the Tasmanian Government suggests, allow the state to work towards becoming a renewable energy exporter. On the other hand the second interconnector project does raise some concerns. Progress on building interconnectors has been slow and expensive over the past decade across the NEM. Whilst the project is likely to place downward pressure on wholesale prices, Tasmania already had some of the lowest wholesale prices before the energy security issues. The project also raises questions about who will support the renewable energy projects to export energy and what policies will be implemented to support these suggestions.

In any event, if by June the Basslink interconnector becomes fully operational and some heavy rain returns to Tasmanian dams, discussions on a second interconnector could be a thing of the past.

The Basslink Interconnector became fully operational on 28 April 2006[i]. The importance of the interconnector is underlined by the fact that during late 2015, Tasmania had been importing about 40 per cent of its electricity needs from Victoria due to the low water storage levels in the state[ii].

The record low rainfall over recent months and the extended fault in the Basslink interconnector, both very rare events that have occurred simultaneously, have raised questions about Tasmania’s security of supply. Based on best estimates, and allowing some contingency for weather and other unforeseeable conditions, Basslink expects that the interconnector will be operational again in late June[iii].

The failure of the interconnector has meant Tasmania has had to secure alternative generation options and also resulted in further discussions on the possibility of a second interconnector.

According to the Tasmanian Government, a second interconnector will not only ensure greater security for Tasmania but also allow for greater opportunities by encouraging investment in its renewable energy sector. The assumption behind the second interconnector would be that Tasmania could develop more renewables and export its clean energy to Victoria, in addition to providing backup energy supply from the mainland to Tasmania. Additionally if one interconnector breaks down, the other is still there for import/export.

How much will the new interconnector cost and who will pay for it?

There are no actual costings at this stage on what it will cost to build the second Bass Strait interconnector. However, looking at Basslink gives us an indication of the potential costs of a second interconnector could be.

Originally the projected cost of constructing the Basslink was approximately $500 million, but this increased to almost $875 million by the time it was completed[v]. Much of the increase at the time, according to the Electricity Supply Industry Expert Panel, was due to the outcomes of the joint Commonwealth, Victorian and Tasmanian environmental assessment process. The Basslink was completed 10 years ago, so in today’s money, taking into account inflation, the new interconnector would likely cost in excess of $1 billion.

Last year the Tasmanian Government pledged $2.5 million to look at a second Basslink and increase Hydro Tasmania’s generation by 10 per cent. The pledge represented specific funding to undertake a full feasibility study for a second interconnector and an additional fibre optic cable[vi]. The Tasmanian Labor Opposition also has plans for a second interconnector and last year pledged $1.5 million for a full feasibility analysis into building the interconnector which would also include a fibre optic cable. At this stage it is not clear how the cable will be paid for and there are no definitive costings yet on the final investment required. This is likely to be part of the output of the feasibility study when it is completed[vii].

The Tasmanian Government has explained that the state’s taxpayers shouldn’t have to bear the entire cost for the project, but has stopped short of indicating what proportion would need to be taxpayer funded. It expects to discuss potential funding models with the Federal Government as part of the next Joint Commonwealth and Tasmanian Economic Council meeting, expected to be held in April.

Figure 1 illustrates the high cost associated with other interconnector projects, which highlights the sorts of costs that the Tasmanian Government may face. Progress on building interconnectors has been slow over the past decade.

Figure 1: Projected and final costs for the construction of interconnectors[viii]

Does Tasmania really need it?

Interconnectors play a crucial role in achieving a competitive and integrated energy market.  By allowing Tasmania to trade more power with Victoria, a second interconnector will increase security for Tasmania and diversify both states’ electricity supply. In principle, the greater opportunities to trade are likely to contribute to downward pressure on wholesale electricity prices.

High wholesale prices have not been an issue for some time in Tasmania. Before the drought in Tasmania and the fault at Basslink, Tasmanian annual weighted spot prices did not pass $50 MWh in over 6 years - something the other NEM states did not achieve[ix]. 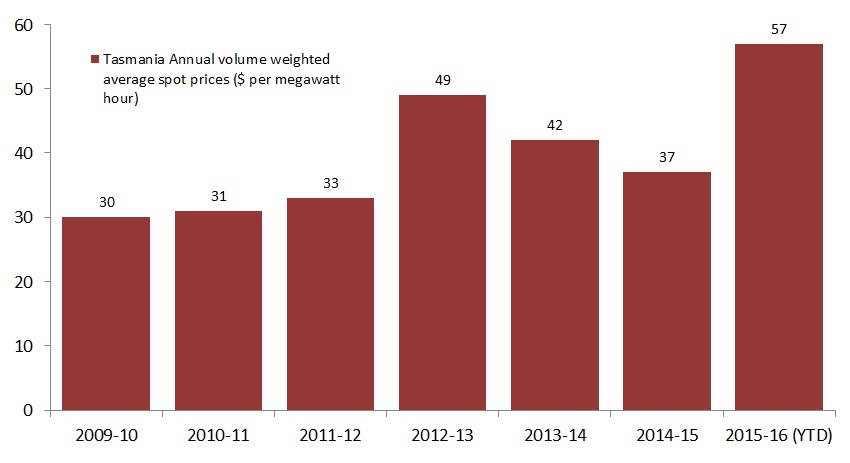 The Tasmanian Government believes that building the second interconnector could enable Tasmania to become a renewable energy exporter[x]. This does raise the question of where support for such renewable energy projects would come from, and to what extent underlying government policy would be able to facilitate greater investment in renewables in Tasmania. A cost benefit analysis of renewables being exported from Tasmania would need to factor in the actual extra capacity of the line, policies in place at the time and the supply situation in Tasmania more generally.

If the Basslink interconnector becomes fully operational again in the coming month, the proposal for a second interconnector would no longer be a priority.  Basslink has in the past been very reliable – it has only experienced two other outages since it was built in 2006. In 2006 there was two hour outage on the Basslink due to a fault with the underwater cable, while in 2010 a breakdown at the land-based converter station at George Town took 10 days to repair[xi].

With energy consumption not showing signs of reaching pre 2010-11 levels, it is unlikely that a second interconnector would be required to secure supply once the Basslink returns.

[vi] Tasmanian Liberals, 2014, “Looking to the future with energy, building a Tasmania we can all be proud of”