However the agency’s most recent Outlook shows that while future increases in electricity demand are largely met with renewable generation, fossil fuels will continue to meet most of the world’s energy demand through to 2050.

The analysis looks at the long-term world energy markets in 16 regions through to 2050. The annual assessment of world energy markets includes a Reference case and four core side cases, which use different assumptions for the projections in each case. Here we look at the Reference case, which is based on current trends and relationships among supply, demand, and prices in the future.

According to the Outlook world energy consumption rises nearly 50 per cent between 2018 and 2050, with more than half of this projected increase occurring in Asian countries, led by growth in China and India.

“Energy consumption was greater in Asia than in any other region in 2018, and we project that consumption will almost double between 2018 and 2050, making Asia both the largest and fastest-growing region in the world for energy consumption,” according to Linda Capuano, EIA Administrator. “This long-term trend of Asian energy consumption to support growing economies strongly influences the extraction, refining, and transport of oil, natural gas, and other fuels.”[ii] 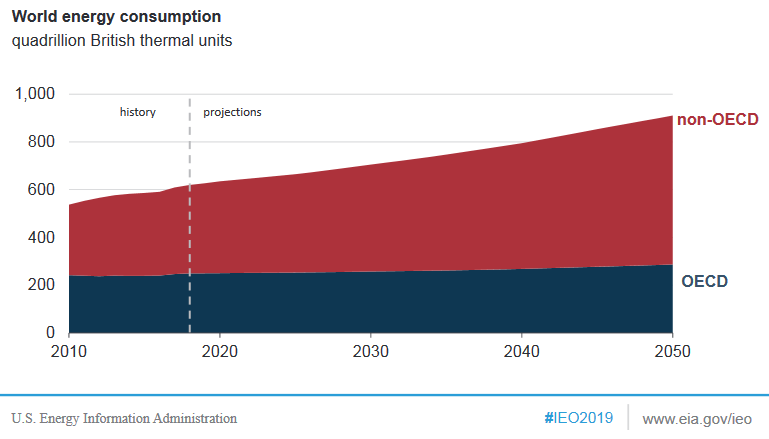 According to the IEA, end-use consumption is increasingly shifting toward electricity, due to falling generation costs, growth in energy consumption, and policy working together to shift the electricity generation mix.

While consumption increases across all energy sources, renewable energy (including hydro) leads the world’s primary energy consumption by 2050, rising by around 3.6 per cent each year.

In OECD countries, policy initiatives are expected to have a stronger effect on electric generation investment, and renewables meet most of the growth in electricity consumption as well as displace some existing generation. While in non-OECD countries, a mix of renewables and non-renewable generating technologies meets electricity consumption growth, this mix is influenced by regional resource and economic considerations[iii].

China, India, OECD Europe, and the United States represent around 75 per cent of the world’s renewable generation by 2050. This is expected to be driven by demand growth, an increasing need for new sources of generation, as well as economic and policy drivers. 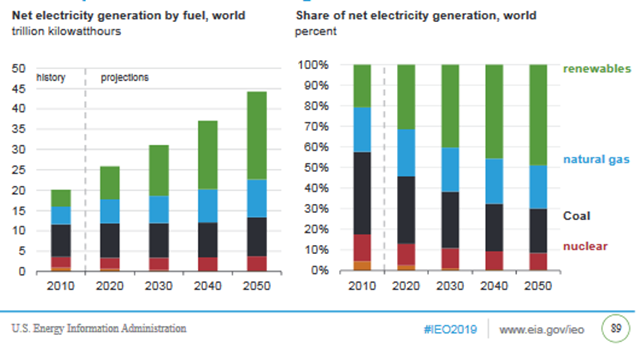 Generation from non-hydropower renewables increases around 5.7 per cent, on average, annually through to 2050. By the end of the projection period wind and solar account for over 70 per cent of total renewable generation (wind reaches 6.7 trillion, and solar 8.3 trillion kWh) as these technologies become progressively cost competitive and supported by government policies.

China, India, OECD Europe, and the United States are responsible for more than 80 per cent of the world’s non-hydropower renewables generation by 2050. However hydropower experiences a “modest” share within the renewables mix, with generation falling from 62 per cent in 2018 to 28 per cent in 2050. According to the IEA, this drop is due to resource availability in OECD countries and environmental concerns in some countries that may limit the number of new projects. 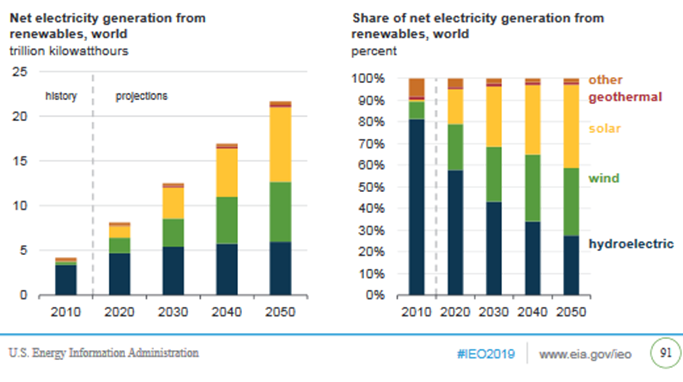 In most regions, coal consumption is projected to remain at current levels with around 0.4 per cent annual growth. Increased coal use in Asian countries drives consumption to more than 9 billion short tons (175 quadrillion Btu) by 2050. In contrast, nuclear consumption increases by 1 per cent per year, while natural gas is the fastest growing fossil fuel, increasing by 1.1 per cent annually.

Coal use is projected to decline until the 2030s as more regions replace coal with natural gas and renewable generation (figure 4). The scale of coal-fired generation remains relatively stable, although its share of electricity generation declines from 35 per cent in 2018 to 22 per cent by 2050, as total generation increases (figure 2).

Coal’s share of China’s electricity generation decreases from 64 per cent in 2018 to 30 per cent in 2050. Slowing demand growth in China along with its goal of limiting CO2 emissions growth by 2030 also contribute to its coal-fired generation peaking in 2025.

Coal is expected to grow in India and Asia throughout the 2040s, these rises are due to increased industrial usage and rising use in power generation in Asia (excluding China). India’s coal consumption grows by around 3.1 per cent annually, from 1.1 billion short tons (17 quadrillion Btu) in 2018 to 2.9 billion short tons (46 quadrillion Btu) in 2050.

Worldwide, coal production remains steady at around 8 billion short tons (or 160 quadrillion Btu) per year through to 2040. 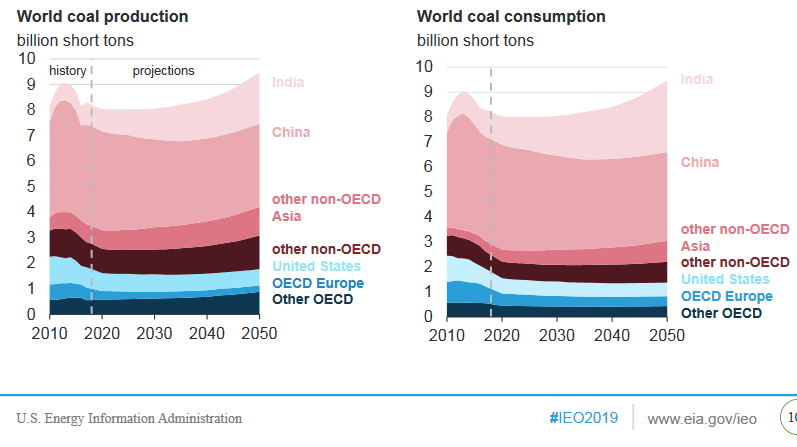 In OECD countries, coal consumption decreases by 2.5 per cent annually from 2018 to 2025, before remaining relatively constant throughout the remainder of the projection period.

The IEA projects electricity generation to increase by 79 per cent between 2018 and 2050 as a result of increased electricity consumption in all end-use sectors.

Residential electricity consumption more than doubles by 2050. This increase, along with the rise in commercial building consumption, is attributable to growing incomes, “urban migration” and increased access to electricity in non-OCED countries, and a rising population.

While consumption in all sectors are projected to rise, the industrial sector (including refining, mining, manufacturing, agriculture, construction) continues to be the world’s largest consumer of energy, making up more than half of the energy consumed during the projection period (figure 5).

Globally, the industrial sector’s energy use increases by more than 30 per cent, to reach around 315 quadrillion Btu by 2050. 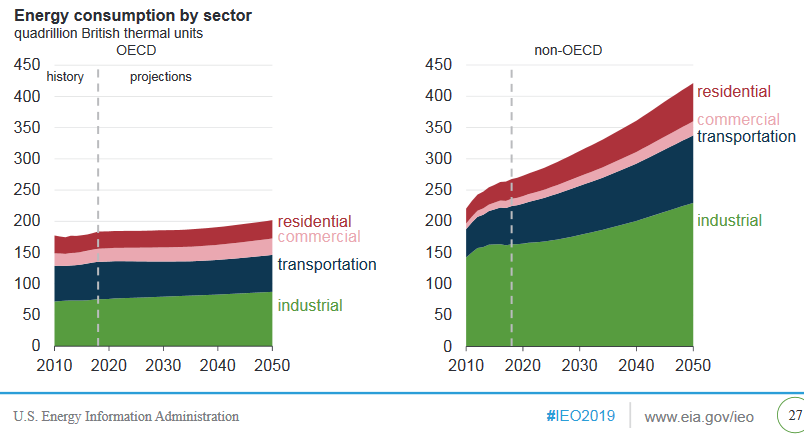 This growth in the industrial sector, as well as the transportation sector (which almost triples to 2050) is expected to be due to increasing product demand as well as a rise in the use of electric vehicles.

[i] Organization for Economic Cooperation and Development: An international organisation that comprises around 37 member countries.