In Search of Lost Time

An energy dispute in the Balkans has caused millions of electric clocks across Europe to lag almost six minutes.

The Continental European (CE) Power System spans 25 nations from Spain to Turkey, and from Poland to the Netherlands (Figure 1). The system runs on a synchronised frequency, so supply and demand can cause the frequency to slightly rise and fall.

Figure 1: The five permanent regional groups based on the synchronous areas 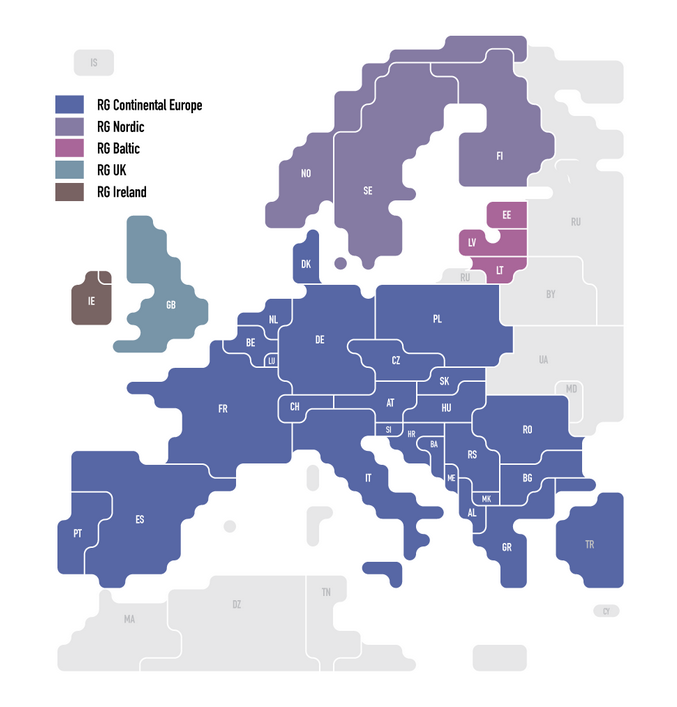 From mid-January the CE Power System experienced continuous frequency deviation, which led to a decrease in the electric frequency average from its mean value of 50 Hz to 49.996 Hz. While only a slight deviation, it added up, and the shortage had a domino-effect on electric clocks across the continent.

Non-quartz electric clocks keep time by measuring the frequency of the electric grid that is supplying the clock power. So they can run late when frequency decreases and fast when frequency increases. Historically many appliances – usually radio alarms, oven and central heating timers - used system frequency to keep time, until the advent of cheap quartz clocks several decades ago made system time redundant for consumers. Yet many interconnected grids still attempt to maintain accurate system time to retain legacy standards from that era - and this European event provides an interesting example, not because of the system time deviation itself, but as a symptom of the difficulty of coordinating actions in a power system that spans many countries.

In early March the association of the European transmissions system operators – ENTSO-E – pinpointed that the continuous deviation had originated from the Serbia, Macedonia and Montenegro block. Specifically linking the issue to a political dispute between Serbia and Kosovo.

Kosovo had been using more electricity than it generates. Serbia, which has a legal requirement to stabilise Kosovo’s grid, did not do so, causing the frequency decrease from mid-January. ENTSO-E announced that the missing energy amounted to 113GWh and “the question of who will compensate for this loss has to be answered.”[i]

Kosovo’s power system was originally designed as part of an integrated Yugoslav generation, transmission, and distribution electricity system. Electricity consumption and peak demand in Kosovo grew over 90 per cent between 2000 and 2010, and peak demand in 2016 was around 1200 MWh. Kosovo has two lignite-fired thermal power plants, and a small hydropower plant (HPP). The two thermal power plants can produce up to 880 MW, and the hydropower plant produces an additional 35 MW (with capacity of over 60 MW when four other smaller HPPs are added)[ii].

ENTSO-E announced that the frequency deviation “that has never happened in a similar way in the CE Power System, must cease.” And while the association was working on a technical solution to the deviations, it urged “European and national governments and policy makers to take swift action … to address the political side of the issue.” [iii]

Yet the dispute runs deep and has been complicated since the late 1990s when the former province of Kosovo seceded Serbia. Serbia has denied to recognise Kosovo since it declared independence in 2008. And since the war ended 19 years ago, four cities in northern Kosovo have remained loyal to Serbia and refuse to pay the Kosovo government for the energy that they use. The remaining Kosovo population has had to pay extra to make up for the short-fall.

Late last year a Pristina court found that Kosovar customers would no longer be required to pay for the energy used by the four northern Serb-majority cities. Following this ruling the Kosovar government announced that customer bills would decrease by 3.5 per cent[iv] and the Kosovo energy regulator directed its electricity grid operator, KOSTT, to reduce its tariff by 44 per cent[v].

KOSTT told Reuters that it “did not have the legal and financial ability to assume the obligation to further cover the losses for power supply to the northern part”. With an energy official reported to say, “We had two solutions: to cut the electricity to people, hospitals, water companies and trigger violent protests by Serbs, or sit down and watch. We decided to sit down and watch.”[vi]

A 2015 Kosovo-Serbia agreement – concerning grid operation regulation and to ensure a reliable flow of power across borders – was signed by both parties and intended to help resolve the dispute. The agreement has never been enacted due to differing claims about the ownership of the Kosovo power grid, which was built when it was a province of Serbia. KOSTT said the dispute cost it 9.6 million euros in 2017 because, it claims, Serbia’s electrical grid operator, EMS AD, benefits from the allocation of capacity from Kosovo’s interconnectors with neighbouring countries[vii].

Serbian and Kosovar transmission system operators recently confirmed that the frequency deviation had stopped. ENTSO-E reassured Europeans that system time across the continent would correct as the grid returned to normal, which it estimated would take a few weeks.

The association acknowledged that an end to the deviation is just the first step to resolving an unprecedented issue that has deep political roots. It still remains unclear who will pay for the loss of power. Some media reported that Serbia had prevented Kosovo from importing cheaper energy from neighbouring Albania[viii] and that Serbia’s electrical grid operator, EMS AD, had thwarted KOSTT’s attempts to become a full ENTSO-E member[ix]. While EMS AD has blamed the missing power on Kosovo "uninterruptedly withdrawing, in an unauthorised manner, uncontracted electric energy" from the power system in January and February[x].

The Kosovo government has reversed-course and allocated one million euros to cover the electricity used by the four northern Serb-majority cities while working to achieve a long-term solution. However ENTSO-E has said between 4.5 million and 5.6 million euros may be needed to compensate for the shortfall and a plan to return the missing energy into the system and “putting the situation back to normal” now has to be developed[xi].

The Kosovo Prime Minister’s office recently announced that Klaus Toepfer, an ex-German environment minister, has been sent to Pristina to mediate and help resolve the dispute[xii]. While ENTSO-E plans to work closely with the European Commission to find a long-term solution, warning that if no solution can be found at political level, a deviation risk could remain.[xiii]

[xii] IBNA, Kosovo-Serbia dispute over electricity grid to be examined and possibly resolved by German official