Implications of doubling global renewables by 2030: IRENA tries to work it out

The International Renewable Energy Agency (IRENA) released a report on January 17, Renewable Energy Benefits: Measuring the Economics.  The report captures and measures the effects of renewable energy deployment on the basis of a holistic macroeconomic framework and the impacts of reaching the 2030 target of doubling the share of renewable energy globally compared to 2010. The focus is on four macroeconomic variables; GDP, employment, welfare and trade. The report is transparent in acknowledging its limitations, yet even with these limitations, some extreme assumptions manage to lead the report to favourable conclusion in regards to doubling of renewable energy by 2030. Three main cases are analysed throughout the report, these are described below:

Reference case: Business-as-usual case that reflects the most up to date official country plans under existing legislations. Where information from Remap is not available, the new policies scenario from the World Energy Outlook (2014) is used.

Remap: The global share of renewables doubles by 2030 compared to 2010, reaching 36 per cent in total final energy consumption. The global doubling does not imply a doubling in each country. Where information from Remap is not available, the IEA 450 scenario is used.

RemapE: The global share of renewables also doubles by 2030, but greater emphasis is placed on electrification of heating and transport, requiring a greater deployment of renewables for power generation. For instance, electric mobility is more widely adopted instead of biofuels for cars. More power generation based on renewables is needed to meet the additional electricity demand, while doubling the renewable energy share.

The report show that doubling the share of renewable energy globally  by 2030 increases global GDP in 2030 between 0.6 and 1.1 per cent compared to business as usual case, equal to USD 707 billion and USD 1.3 trillion. Figure 1 shows the change in GDP in selected countries. 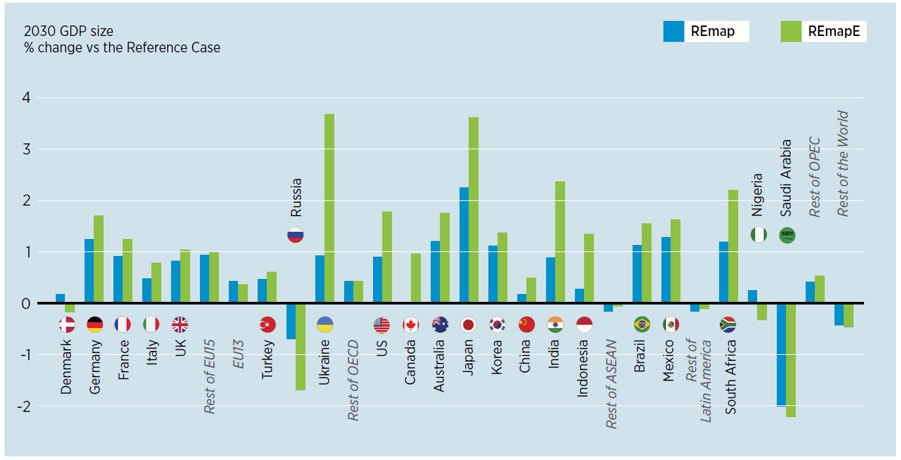 IRENA claims the key driver to increased GDP growth is increased investment and ripple effects throughout the economy. A key issue missed in this analysis is the  effects of disinvestment in the energy industry and closure of power plants due to the increased surplus of generation capacity. An early Spanish study[i] claimed 2.2 jobs were lost for every job created by Spain’s renewables schemes, but the methodology of this study has been broadly criticised as overly simplistic. What it did highlight, however, was that public subsidies will have some crowding out effect of private spending, which will reduce jobs elsewhere in the economy. Even though this example may be one sided, it does show the reverse ripple effect which must be considered. The effects of increased renewables on global fossil fuel trade is discussed  in the global fossil fuel trade section below.

Figure 2: Impacts of crowding out of capital (2030 GDP size, % change vs the Reference Case) 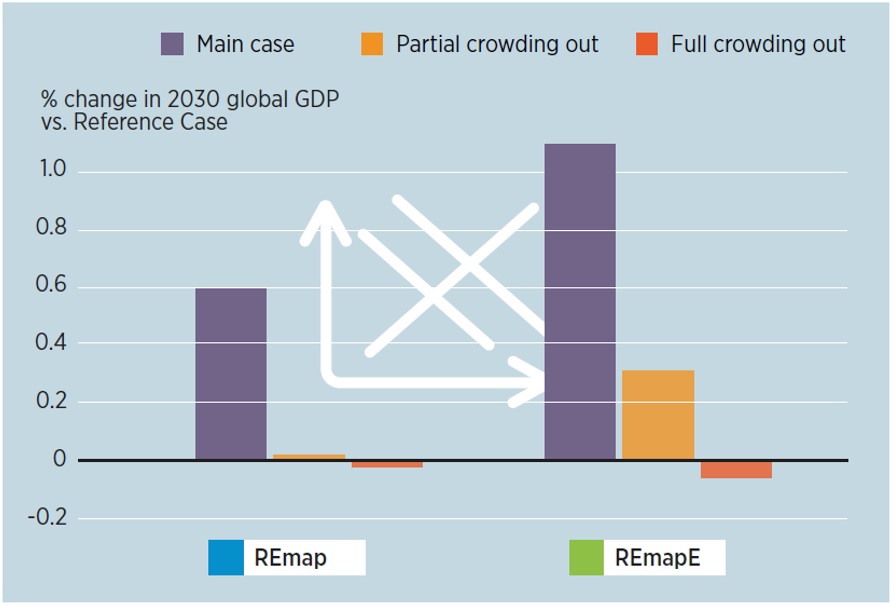 Under the 100 per cent crowding out scenario, savings in the economy are equal to investment. Lending is taken away from other areas of the economy to fund new renewable projects.  This scenario sees GDP decrease as highlighted above.

IRENA estimates that doubling renewable energy globally by 2030 will result in an annual growth rate of 6 per cent compared to 2 per cent under the reference case. Figure 3 shows the projections for employment over the outlook period. 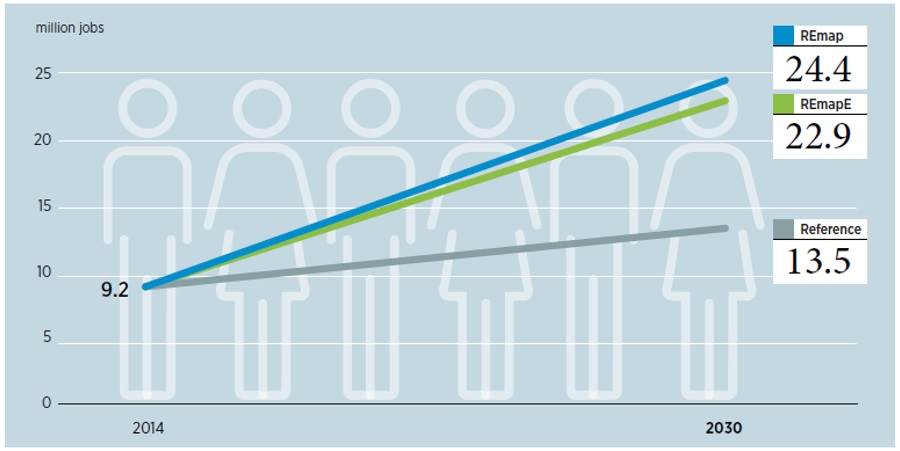 The analysis of welfare is split into three categories; economic, social and environmental. The three criteria are then split into sub categories. These sub categories include, but are not limited to; household consumption, economy-wide investment, individual status, self-esteem and health expenditure due to air pollution and the depletion of natural capital through the consumption of raw materials.

Shortcomings in the analysis include the effects of double counting, weighing of sub indicators and the conversion of these indicators to a common unit for aggregation. IRENA concludes that doubling the share of renewables will increase welfare 2.7 to 3.7 per cent.

The complex and difficult nature of aggregating values, which are not correlated and the assignment of weight to these sub indicators should be taken into account when interpreting these results.

Increased renewable penetration leads to less reliance on fossil fuels. Countries such as Japan, China, India and the EU, spend up to 7% of their GDP on energy imports. IRENA notes that the reduction in net imports for these countries will increase GDP through increased domestic demand for goods and services. On the other side of the equation,  countries such as Australia will see the opposite effects where the decreased demand for fossil fuels will decrease GDP due to Australia being a net exporting countries. Figure 4 shows the forecast change in net imports of fossil fuels over the outlook period. 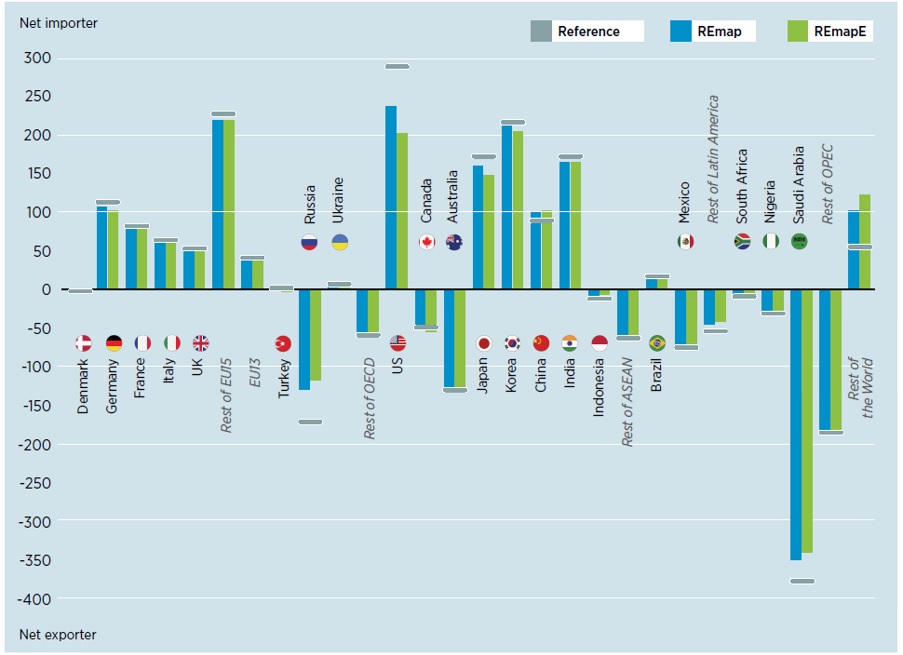 The findings of the report are misleading. The relationship between the variables analysed and the implication of assumptions embedded in the analysis, such as the effects that no crowding out will have on investment, welfare, jobs and international trade will have on the outcome mean that the statistics presented must be used with caution. This is a good starting point, however analysis of this size still has a long way to progress.