How to value generation: Is it all about the cost?

By comparing the LCOE and LACE values the EIA seeks to highlight whether or not a project’s value exceeds its cost which “may be used to determine which project provides the best net economic value”.

When the LACE value of a particular technology exceeds its LCOE at a given time and place, that technology would generally be economically attractive to build. The EIA argues that the net difference between LACE and LCOE provides a reasonable point of comparison of first order economic competitiveness among a wider variety of technologies rather than just looking at LCOE or LACE in isolation.

It is also not a perfect comparison: obviously policy issues such as environmental regulation, investment or production tax credits or other government credits or support mechanisms for different types of generation will also influence investment decisions. Cost comparisons of specific types of technology also do not take into account the existing capacity mix and the demand in a specific region which will need to be balanced between dispatchable generation (like gas, coal and hydro plants) and non-dispatchable or intermittent generators like wind and solar. The EIA comments that units whose output can be varied to follow demand “generally have more value to a system that less flexible units”.

This demand-supply balance is reflected in the proposed National Energy Guarantee currently under consideration in Australia which seeks to balance reliability with affordability and emissions profiles.

The EIA notes that uncertainty over future policies as well as future fuel costs can lead generation owners or those financing generation projects to put a value on portfolio diversification, which is not reflected in the levelised cost calculations.

The estimated capacity weighted average LCOE for plants entering service in 2022 shows geothermal the lowest cost generation followed by advanced combined cycle gas, onshore wind farms and conventional combined cycle plants. Unlike Australia, the US has access to substantial geothermal resources, particularly in its western states[i] and already has more than 20GW of installed capacity[ii].

When tax credits are taken into account onshore wind is second to geothermal, while advanced Combined Cycle Gas Turbines (CCGT) is the third cheapest technology. With tax credits, utility scale solar PV is ranked fourth (2016 $58.1/MWh versus $73.7/MWh without tax credits). Under both measures (with and without tax support) conventional combustion turbines are the most expensive forms of generation ($100.7/MWh) as shown in figure 1. 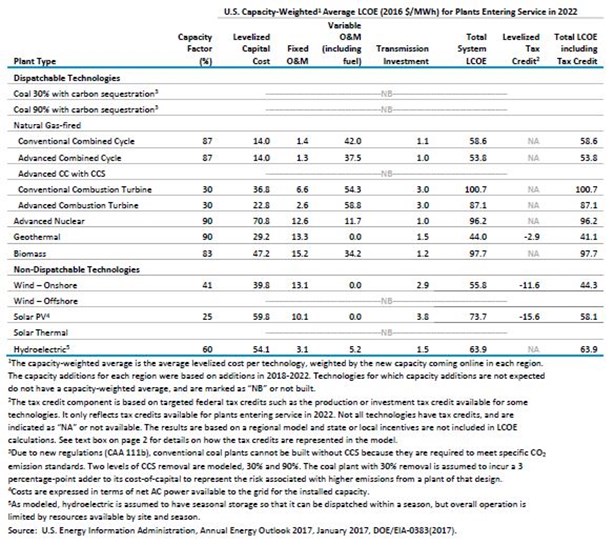 The LCOE is often used to measure the overall competitiveness of different forms of generation and shows the cost per kilowatt hour of building and operating a generation asset over an assumed financial life and utilisation.

By comparison Lazard also released an assessment of LCOE late last year and both its estimations and longer term trends in LCOE for different technologies is shown in Figure 2 below. 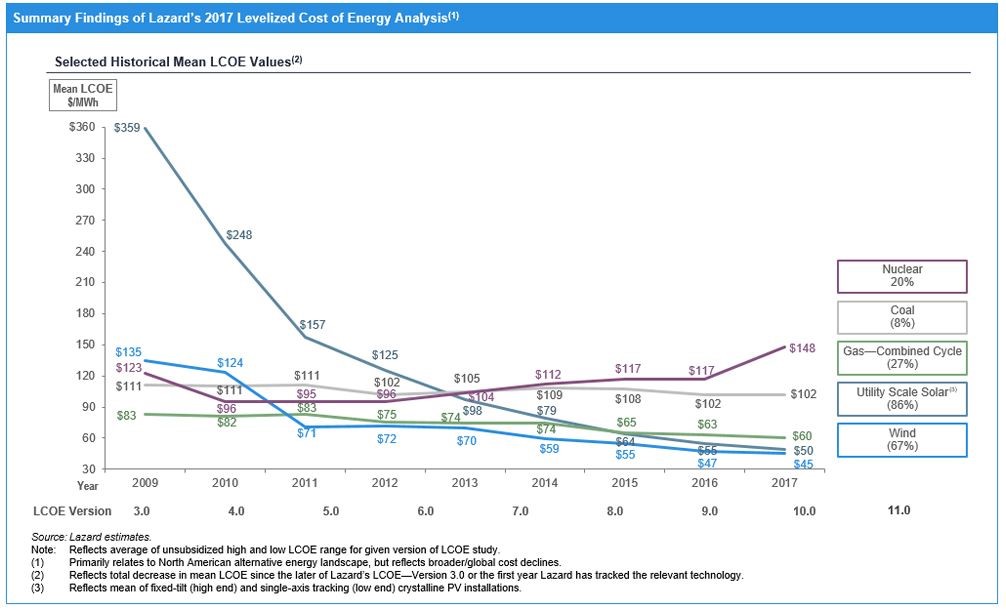 The EIA argues that because projected utilisation rates, the existing mix and capacity values can all vary dramatically across regions where new generation capacity may be needed the LCOE can be misleading when assessing the economic competitiveness of various generation alternatives. It believes LACE provides a better assessment of competitiveness because it provides a measure of what it would cost the grid to generate the electricity that is otherwise displaced by a new generation project as well as the levelised cost. It does caution that assessing the avoided costs is more complex than levelised costs because it needs to project how the system would have operated without the generation option being evaluated. In addition, this assessment doesn’t take into account the dispatchability of plant.

The EIA does it by basing the avoided costs on the marginal value of energy and capacity that would result from adding a specific technology to the system. 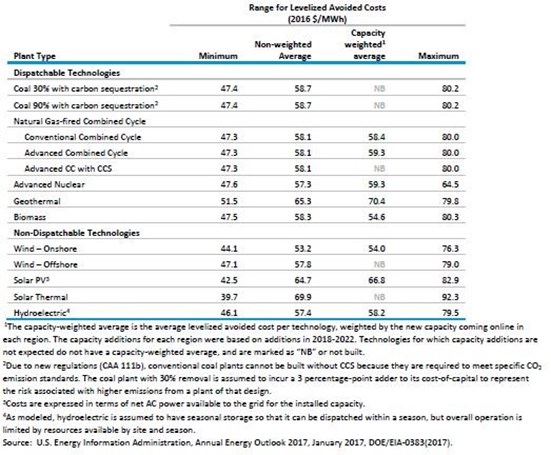 In the comparison of the LACE and LCOE (both capacity-weighted) in Figure 4 below, a negative difference indicates that the cost of the marginal new capacity exceeds its value to the system, as measured by LACE, while a positive difference indicates that the marginal new unit brings in value in excess of its cost by displacing more expensive generation and capacity options. 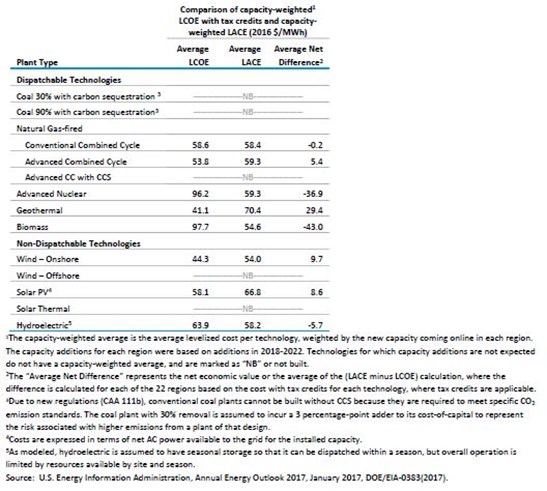 Under this assessment geothermal is the best technology available, followed by onshore wind, solar PV and advanced CCGT.  This takes into account tax credits for some technologies, but not the dispatchability aspects.

[i] EIA, Today In Energy