How to contain mushrooming costs of nuclear: MIT study

Nuclear power is not on the radar in Australia despite recent suggestions that it should be reconsidered[i] [see EnergyInsider “Paper flags new power scenarios”] but it will continue to play an important role in getting carbon emissions down and ensuring reliable power supply globally.

A new MIT Energy Initiative study, undertaken over two years, provides an assessment of what is needed to increase the role of nuclear generation, particularly in the west where concerns about safety and costs have had a significant impact.

The resulting report highlights measures it believes can arrest and then reverse the recent trend for nuclear developments. As part of its assessment the MIT team surveyed recent light water reactor construction projects around the world. Nuclear energy accounts for 11 per cent of global electricity supply and for a major share of all low-carbon generation in the US, Europe and globally (see figure 1). But it notes that since 2003 (when MIT undertook an assessment of nuclear power) the context globally has “changed dramatically for the worse”. 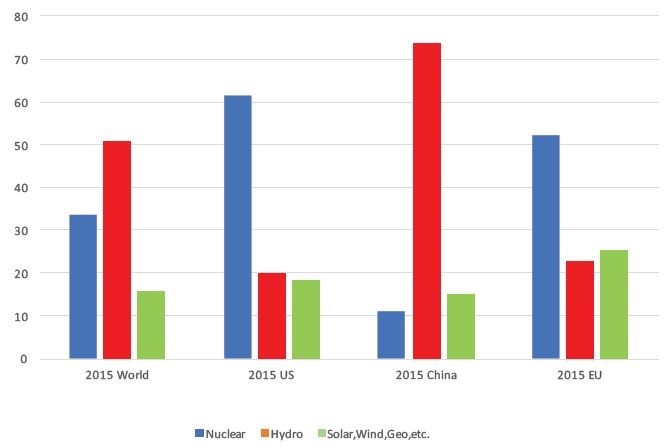 A change for the worse

A major factor in the US has been the availability of large quantities of cheap shale gas after 2007 and a drop in demand and electricity prices following the financial crisis, while falling gas prices also put economic pressure on nuclear plants in Europe and Asia.

The key finding of the MIT’s report is that nuclear continues to have an important role to play in meeting emission reductions from electricity generation, but that the fundamental challenge is cost. Other generation technologies, particularly renewable generation, have become cheaper in recent decades, while the reverse is true of nuclear plants. 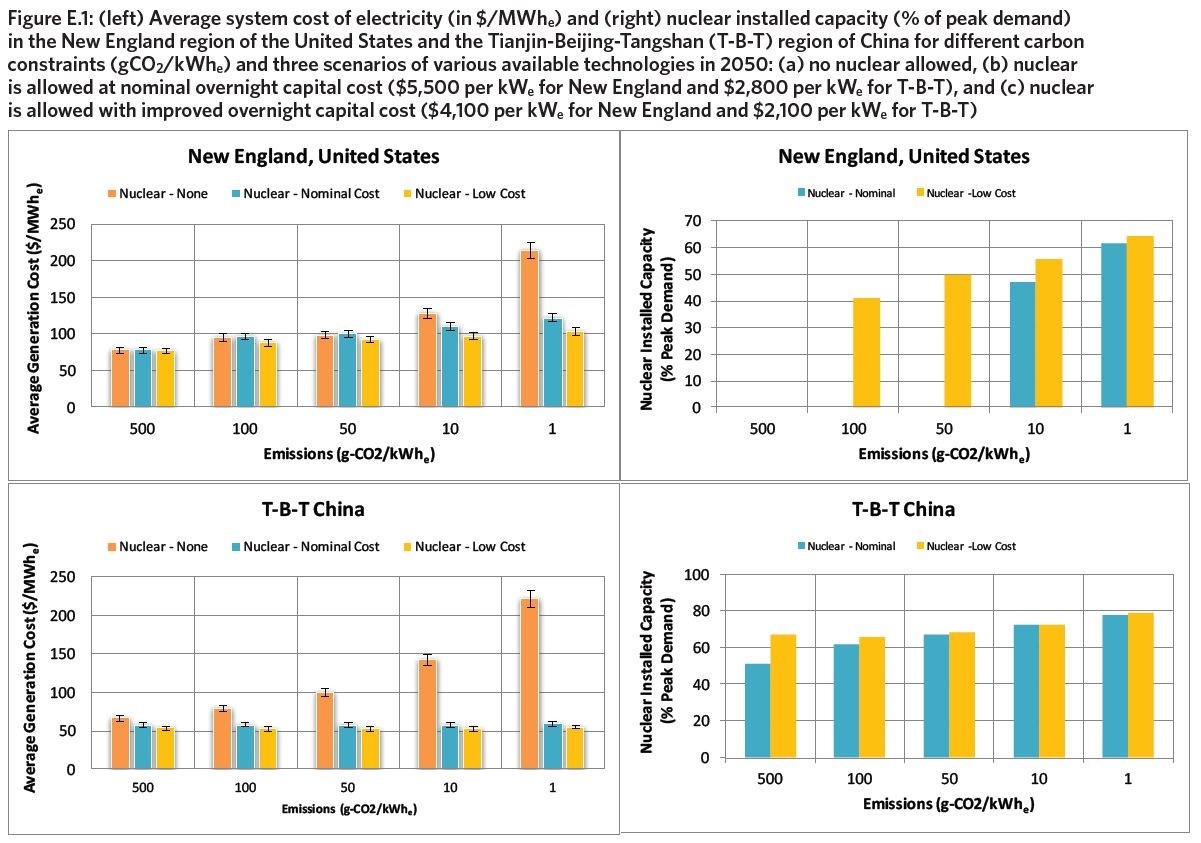 This may not be a particularly startling finding given reports of cost blow outs and problems on major projects in the US, UK and Europe. Witness the cost and time overruns experienced by Westinghouse with plants in Georgia and South Carolina in the US [iii] that ultimately led the company to declare bankruptcy and the abandonment of the V.C. Summer project. While in the UK, French supplier EDF suffered substantial cost rises and delays at the Hinkley C power plant project[iv]. Projects in Finland and France encountered similar issues.

The report’s value lays in trying to identify some potential ways to address the concerns and get costs down. It drew on recent and ongoing nuclear construction projects worldwide to identify best practices, the key cost drivers (site preparation, civil works, equipment and its installation, engineering and financing costs) while examining technology innovations to try and pinpoint ways to reduce expenses.

MIT notes that while nuclear was traditionally a baseload generation, nuclear plants can now adapt to provide load-following generation with many advanced reactor concepts being designed for that capability.

Increased focus is on using proven project/construction management practices to increase the probability of success in the execution and delivery of new nuclear plants. The study notes that the recent experience of nuclear builds in the US and Europe has demonstrated repeated failures of construction management practices, and the US projects ran into issues with the timeliness of approvals. MIT says that several corrective actions are urgently needed, and some of those actions include:

The study also recommends a shift away from primarily field construction of plants to more serial manufacturing and standardisation of plants. In particular the study points to the use of an array of cross-cutting technologies, including modular construction in factories and shipyards, advanced concrete solutions, seismic isolation technology and advanced plant layouts that could reduce costs and improve completion time.

It also recommends a shift towards reactor designs that incorporate inherent and passive safety features, decarbonisation policies that create a level playing field, and Government establishment of reactor sites where companies can deploy prototype reactors for testing. As well as the establishment of government funding programs to support prototype testing and commercial deployment of advanced reactor designs.

The study has found that new policy models and cost-cutting technologies could help elevate the role of nuclear power in tackling emissions from generation. It largely seeks to address the decline in leadership in the nuclear industry in the US and Europe which is in contrast to the ongoing and steady rate of new plant construction in South Korea, China and Russia, while nuclear development is emerging in newer regions such as the Middle East. In summary the study’s four key findings, which it believes are required to realise the full potential of nuclear, are:

[i] The Australian, “Taking Another Look At Nuclear”,

[ii] Simulations were performed with an MIT system optimization tool called GenX. For a given power market the required inputs include hourly electricity demand, hourly weather patterns, economic costs (capital, operations, and fuel) for all power plants (nuclear, wind and solar with battery storage, fossil with and without carbon capture and storage), and their ramp-up rates. The GenX simulations were used to identify the electrical system generation mix that minimizes average system electricity costs in each of these markets. The cost escalation seen in the no-nuclear scenarios with aggressive carbon constraints is mostly due to the additional build-out and cost of energy storage, which becomes necessary in scenarios that rely exclusively on variable renewable energy technologies. The current world-average carbon intensity of the power sector is about 500 grams of CO2 equivalent per kilowatt hour (g/kWhe); according to climate change stabilization scenarios developed by the International Energy Agency in 2017, the power-sector carbon intensity targets to limit global average warming to 2°C range from 10 to 25 g/kWhe by 2050 and less than 2 g/kWhe by 2060.