Summer is the time of heatwaves in many parts of Australia. Hot weather has historically placed significant demand on the electricity system, increasingly so over the past decades with the increased use of air conditioners in homes and businesses. Heatwaves (three or more days of unusually high temperatures) place the grid in many parts of mainland Australia under great stress, sometimes resulting in blackouts. These can be caused by a number of factors: local faults, bushfires or generator faults. This paper has been prepared by the Australian Energy Council to help media report on heat waves and electricity supply during the summer period. 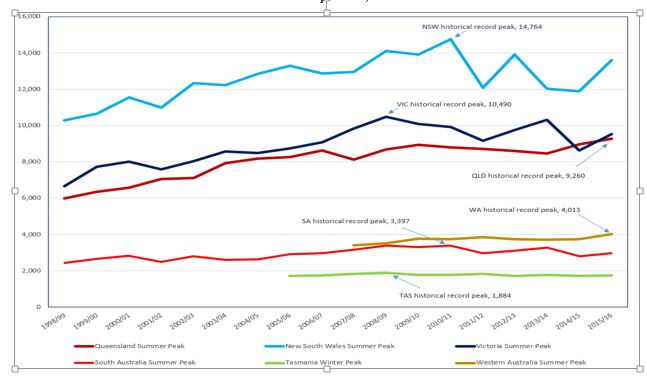 Many of these peak demand events occurred five or more years ago. That’s the result of a combination of the increase in rooftop solar PV and reduced demand from large industrial facilities, some of which have closed or reduced demand. The exception to this is Queensland and Western Australia. In Queensland large uptake of rooftop solar PV has been offset by growing demand, particularly in compressing LNG for export. In WA residential energy demand growth is attributed to population growth and increased use of electrical appliances, including air conditioning. The chart above shows the trend for peak demand in summer and winter over the past few years.

Heatwaves (three or more days of unusually high temperatures) occur across Australia. They are particularly prevalent, and have the biggest impact on the electricity grid in January and February in South Australia and Victoria.

What we know about heatwaves and electricity demand

Just as heatwaves are predictable, so there are a range of factors which can vary the level of demand:

These effects can be seen in the demand profile of the last South Australian heatwave in January 2014. Demand increased cumulatively as the heatwave progressed through the week, while the effect of rooftop PV is to shift peak demand later each evening. 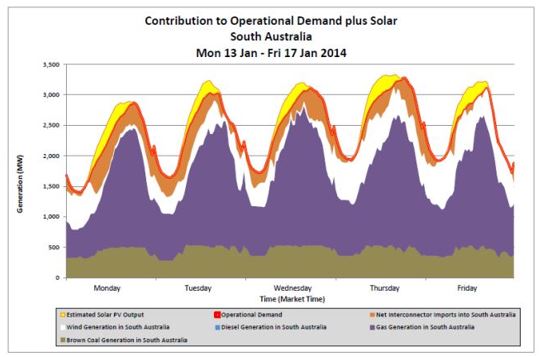 What happens in a heatwave?

We know when heatwaves are coming and plan accordingly. Most maintenance is suspended to ensure that the system is able to meet demand. Not only is the grid put under stress by heavy loads, but high temperatures and associated heavy loads can impair the operation of key infrastructure like generators and transmission lines. Bushfires or the risk of bushfires can force transmission lines to be switched off. These impairments can and do impact on the operation of the system.

During hot days, it is not unusual to see high spot prices in the wholesale electricity market in that state. This is how the market is designed to work. Higher prices signal to generators to enter the market to help meet supply. Peak generators are built specifically for these types of events, and can sometimes run for only a few days a year. These higher wholesale prices do not translate into higher retail electricity prices during a heatwave with retail prices set across a full year.

As rooftop solar PV is operating behind the residential meter, we can only estimate its total generation. Its impact on the data grid looks like reduced demand, when in fact it is just a different, distributed source of generation.

There are two basic types of blackout that can occur during a heatwave.

The shortage of electricity supply can be the result of a number of factors: It could be a fault or heat related stress in a generator or generators which reduces supply at critical times, or a transmission line may be reduced in output because of high temperatures (the lines can sag under heavy load and high temperatures), or shut off because of the risk of bushfires. Any of these events, under certain conditions, can increase the risk of blackouts.

Most heatwave blackouts, however, affect only parts of the grid at any time.

What is the impact of recent and announced power stations closing?

In May this year the 544MW Northern Power Station closed in South Australia. It was the last remaining coal-fired generator in that state. In March 2017, the 1600MW Hazelwood power station will close in Victoria. The Australian Energy Market Operator (AEMO) has assessed the market in South Australia and Victoria and has advised there is sufficient generation to meet maximum demand.

AEMO forecast the closure of Hazelwood will put Victoria’s firm capacity reserves (power stations that can be turned on and off) at -145MW.  Assuming imports of up to 590MW from Tasmania into Victoria and 400MW from NSW, it is possible for Victoria to meet its maximum demand and still supply South Australia.

The closure of these power stations has increased the cost of wholesale electricity, as there is reduced supply to meet the same demand. This has flowed through to higher power prices in South Australia and Victoria.

What is the impact of increased renewable energy during a heatwave?

As discussed earlier, rooftop solar PV contributes to the supply of electricity on hot days. Wind generators also contribute to the generation supply during heatwaves, depending on the amount of wind blowing.

South Australia has the highest penetration of intermittent renewable generation in an isolated grid in the world. Around 40 per cent of that state’s generation comes from wind energy. What this means during a heatwave is that this generation is only available if the wind is blowing. While there is technically sufficient capacity to meet demand in South Australia even if there is no wind blowing during a heatwave, the grid is increasingly vulnerable during these conditions.

Increased use of renewable energy will require careful planning to ensure that these risks are managed so we can continue to decarbonise supply whilst maintaining reliability.