Heat wave ahead: Life after coal

Today is the official start of South Australia’s first summer without coal fired power. The 544MW Northern Power station, the state’s last remaining coal generator, closed in May. In states like South Australia and Victoria, summertime heatwaves produce maximum electricity demand events. So how will the system cope with life after coal?

Heatwaves (three or more days of unusually high temperatures) typically place the South Australian and Victorian electricity grid under stress. Not only is demand at or near maximum demand, but high temperatures and heavy loads can impair the operation of key infrastructure like generators and transmission lines. While heatwaves are predictable and therefore can be planned for, dialing the system up to maximum output increases the risk that if something fails, there will be energy shortages. Unscheduled blackouts can occur during these times for these reasons.

Both South Australia and Victoria tend to have coincident heatwaves, which is important when looking forward to see how a grid with reduced supply from coal fired generators will cope with these events.

What we know about heatwaves and electricity demand

Just as heat waves are predictable, so there are a range of factors which can vary the level of demand:

Duration of the heatwave: both temperatures and electricity demand tend to increase in the third and fourth days of consecutive hot days, as air conditioners increase output to manage the accumulating heat load in buildings;

School holidays and weekends: demand tends to be higher towards the end of January (or February) when schools and businesses have returned to work, and weekdays have higher demand than weekends;

Solar photovoltaic (PV): increased deploy of rooftop solar PV is helping to both reduce system demand during most summer heatwave peaks (providing there is no cloud cover) and is pushing the maximum peak event to later in the evening.

These effects can be seen in the demand profile of the last South Australian heatwave in January 2014. 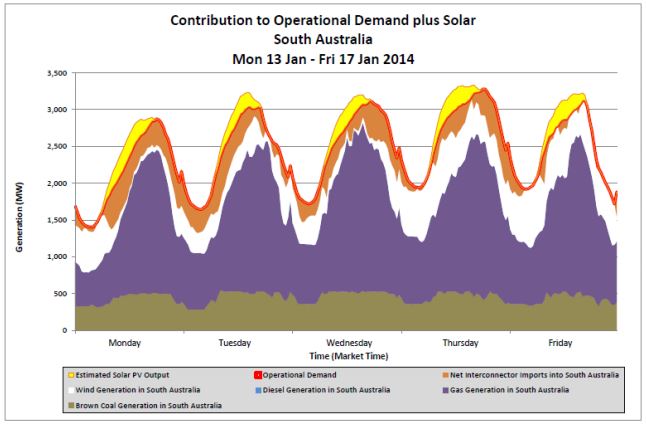 What we know about heatwaves and electricity supply

The Australian Energy Market Operator (AEMO) forecasts demand and reports on the generation capacity to meet this demand. The June 2016 National Energy Forecasting Report (NEFR) is reporting flat demand growth across most of Australia, with the exception of increases in demand in Queensland associated with LNG compression.

In South Australia, forecast flat electricity demand coupled with continued deploy of rooftop PV means AEMO is forecasting declining demand through to 2024-25. To meet this supply South Australia has firm and intermittent generators, as well as the expanded Heywood and Murraylink interconnectors.

We can stack the remaining firm generation and interconnection capacity in South Australia and plot it against the forecast demand to estimate minimum reserve margins under predicted maximum demand conditions (Figure 2). 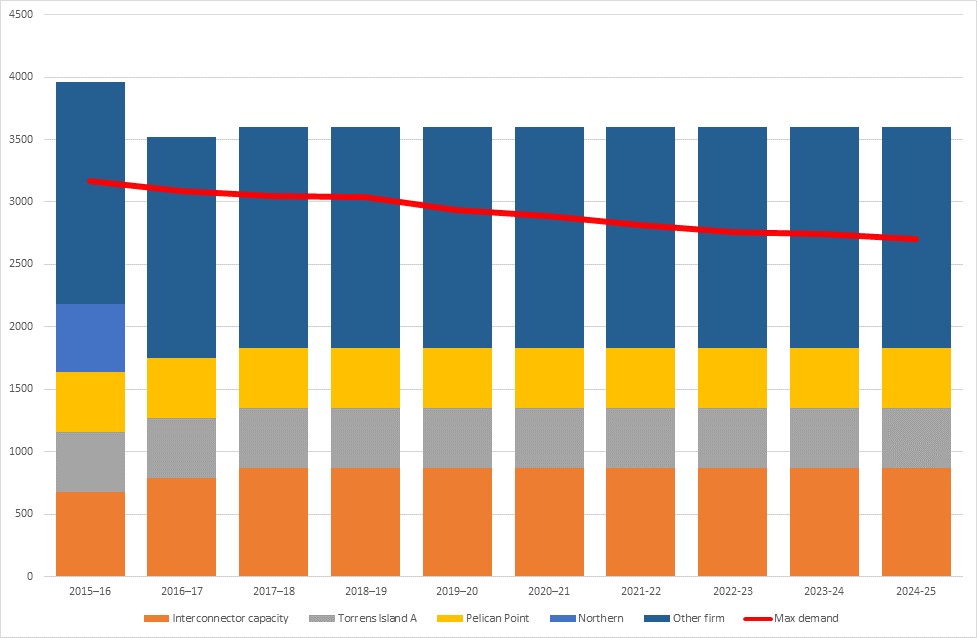 This chart shows that minimum reserve margin may be at its lowest in the summer of 2016-17, as a result of the closure of Northern and the remaining interconnector capacity coming progressively on line.  Reserve margins appear to increase each year after that, assuming maximum demand continues to fall and all plants remain online. In the context of declining demand, the latter is in practice unlikely, but it is hard to estimate when and which plant will mothball or close first.

If all plant is operating at capacity, even in the event of a zero wind generation heat wave, there should be sufficient capacity to meet maximum demand.  The effect of solar PV is reflected in the demand curve (behind the meter) rather than the supply stack. Solar PV is pushing the timing of maximum demand later in the day, meaning that incremental PV has a diminishing effect on maximum demand, as the timing gets closer to sundown.

Both transmission and generation can be impaired by high temperatures and high volumes, as well as faults and outages that can occur during these periods. Additionally, bush fires can impact supply, with electricity outages in this case a result of short-term damage to transmission lines. AEMO reported that during the 2014 heatwave period, fires threatened electrical and gas infrastructure assets.

Further from the Summer 2017-18 Victoria will be operating without the Hazelwood Power station. AEMO forecast this will put Victoria’s firm capacity reserves at -145MW.  Assuming imports of up to 590MW from Tasmania into Victoria and 400MW from NSW, it is possible for Victoria to meet its maximum demand and supply South Australia.  This in turn relies on a larger network of generators and transmission lines to be operating optimally, which in turn increases the risk and fragility, of the grid as a whole.